Before I hold down the rewind button and spool way back into monochrome history, let’s just give it a brief prod, returning to those balmy, barmy dog days of that first Covid lockdown, when the sun burned bright in a cloudless sky and time went all wrong. Afternoons that seemed to stretch out for a whole week; whole weeks that shot by in a flash. It’s not exactly a hard sell, but this would be an adventure born of stir-crazy, ‘weapons-grade’ boredom.

My first task under house arrest was to settle down and watch a career in travel journalism die before my eyes. That took care of half an hour. Then I drank cider in the garden. Three days in, my wife came down with a fairly apparent dose of what my daughters called rona – headache, leaden fatigue and a total loss of smell. It dragged on and on, but got no worse than that. I took my son’s bedroom window out of its frame, carried it out on to the patio and somehow spent five whole days doing stuff to it with brushes and spatulas. i drank more cider; I drank stronger cider. I eradicated every last rhizome of every last buttercup from my flower beds. Just after my wife started feeling better, I started feeling worse.

But I was lucky, too: a couple of days in bed, another week mired in a kind of jetlagged hangover, all the while with that same unsettling vacancy in my nostrils. still, what a towering relief it was when I recovered, and could at last re-string our rotary washing line, pickle seven kilograms of carrots, and devote an entire fortnight to restoring the old traffic lights I’d left in my parents’ garage thirty years before.

Towards the end of April, I had scraped the bottom of my barrel of projects and pastimes. Then it came to me. With juggling, topiary or transvestism just hours away, I braved the horrid, spidery depths of my shed and effortfully extracted the bike I had ridden round France two decades previously. What a terrible state it was in, poor old ZR3000. Cracked and airless tyres, great coils of detached handlebar tape that spooled down to the floor. The front derailleur had broken off and everything was covered with rust, dust or both.

Resurrecting this forlorn machine to its proud, factory-fresh glory was more than a project – it was a duty of care, a moral obligation I had been postponing for at least fifteen shameful years. Make that sixteen and counting. I flicked off the biggest insects, pumped up the tyres, slashed away all the bar tape and gaffer-taped the redundant front derailleur cable round the seat tube. Then I went for a ride

Resurrecting this forlorn machine to its proud, factory-fresh glory was more than a project – it was a duty of care, a moral obligation I had been postponing for at least fifteen shameful years. Make that sixteen and counting. I flicked off the biggest insects, pumped up the tyres, slashed away all the bar tape and gaffer-taped the redundant front derailleur cable round the seat tube. Then I went for a ride.

The sky was blue and the roads of London were weirdly, wonderfully empty. I went into town and had Oxford Street and its shuttered shops all to myself, in broad, bright daylight. i went out of town, south-west to Chertsey, up the Thames Path to Staines, back home down the Great West Road. A 30-mile circuit right under the Heathrow flight path, yet the loudest noise was birdsong. Well, that and ZR’s unlubricated shrieking. but I could live with that. The greatest legacy of my previous two cycling endeavours, in which I covered more than 15,000 kilometres on bikes with 140 years and three gears between them, is that everything I’ve ridden since seems like the finest, fastest, human-powered two-wheeler ever conceived. it’s just such a shame that I haven’t ridden anything since, not really. Those 30 miles were a good 27 more than I had cycled on any single day over the previous five years. But sometimes it doesn’t take much to rekindle the flame. Turns out, all I needed was the gentle nudge of living through a global pandemic with my front door welded shut.

I did the Chertsey loop an awful lot after that, getting my head down, pushing the speed up, loving the footloose freedom and successfully blotting out the plague’s ratcheting horrors. In previous years i’d have been watching the Giro d’Italia about this time, but along with the Tour it had been postponed. My Chertsey rides were filling a grand-tour-shaped hole in my life. One especially sweltering afternoon I even contrived an adverse reaction to a surfeit of performance-enhancing substances, chugging a giant flagon of Pepsi max outside a petrol station because it was cheaper than a can, then throwing it up next to a taped-off playground down the road.

I felt myself being drawn ever deeper into this one-man, half-speed, groundhog grand tour. Lockdown seemed to lend itself to the endeavour: the soothing routines; that unkempt, fuck-it grubbiness; the sense of living in a bubble, a parallel world where everything seemed both tediously familiar yet utterly alien. By night I began to work through my pile of cycling books. Having written three of these it’s not entirely surprising that I get given a lot, but I always dread opening them. Why upset myself? When you read a book about cycling, the very least you deserve is an author who knows a lot about it, and ideally does a lot of it. Because I tick neither box, by the end of the first page I feel guilty and ashamed, laid bare as the total fraud I so clearly am.

It may have been thoughts like these that put Viva la Vuelta on top of my bedside pile. Spain’s national bike race is comfortably the least grand grand tour. It didn’t get going until 1935, twenty-six years after the Giro joined the Tour de France on the cycling calendar, and since then has been shunted all around the season – April, June, August, October – trying to find its niche. And failing, because the race has perennially struggled to attract the world’s best riders: Eddy Merckx only bothered with it once, casually destroying the field in 1973.

When the Vuelta does make history, it’s usually the wrong kind. After winning the 1974 edition by eleven seconds – then the closest ever margin in a grand tour – José Manuel Fuente astounded the foreign press by revealing that he’d calmed his last-stage nerves by chain-smoking through the night. In the 2013 edition, forty-one-year-old American rider Chris Horner became the oldest grand tour winner of all time, and by a margin of five years. It was only his second European race victory of any sort. And whereas the other grand tours have only ever been cancelled due to global conflict, Spain went five years without a Vuelta in the 1950s because nobody could be arsed.

Given all this, it’s probably no surprise that the English-language Viva la Vuelta appears to be the only published history of the race. Not even the Spanish have bothered with one. And yet I only got as far as page 25 before dropping it on the floor. To be clear, Viva la Vuelta is a most engaging read, and some weeks later I picked it up again and finished the whole book in a single sitting. I didn’t drop it in despair or indifference, but in the very frankest astonishment. By page 25 I had absorbed a potted account of the 1941 Vuelta a España, focused on the man who won it, and on how he had spent the previous five years of his life. By page 25 I knew how I would be spending the next few months of mine.

Win a copy of Vuelta Skelter!

You can win a hardback signed bookplate copy of Vuelta Skelter by Tim Moore published by Penguin Books plus his 2012 book French Revolutions in which Tim cycles the Tour de France a few weeks before the professionals, and his 2015 book Gironimo where Tim recreates the notorious 1914 Giro d'Italia.

If all that wasn't enough you will also win a Wahoo Elemnt Roam GPS Bike Computer - reviewed in the Aug/Sep issue of Cycle magazine - which retails at £299.99.

Published by Jonathan Cape, 12 August 2021, you can get a hold of Tim Moore's latest book, Vuelta Skelter in Hardback for £18.60 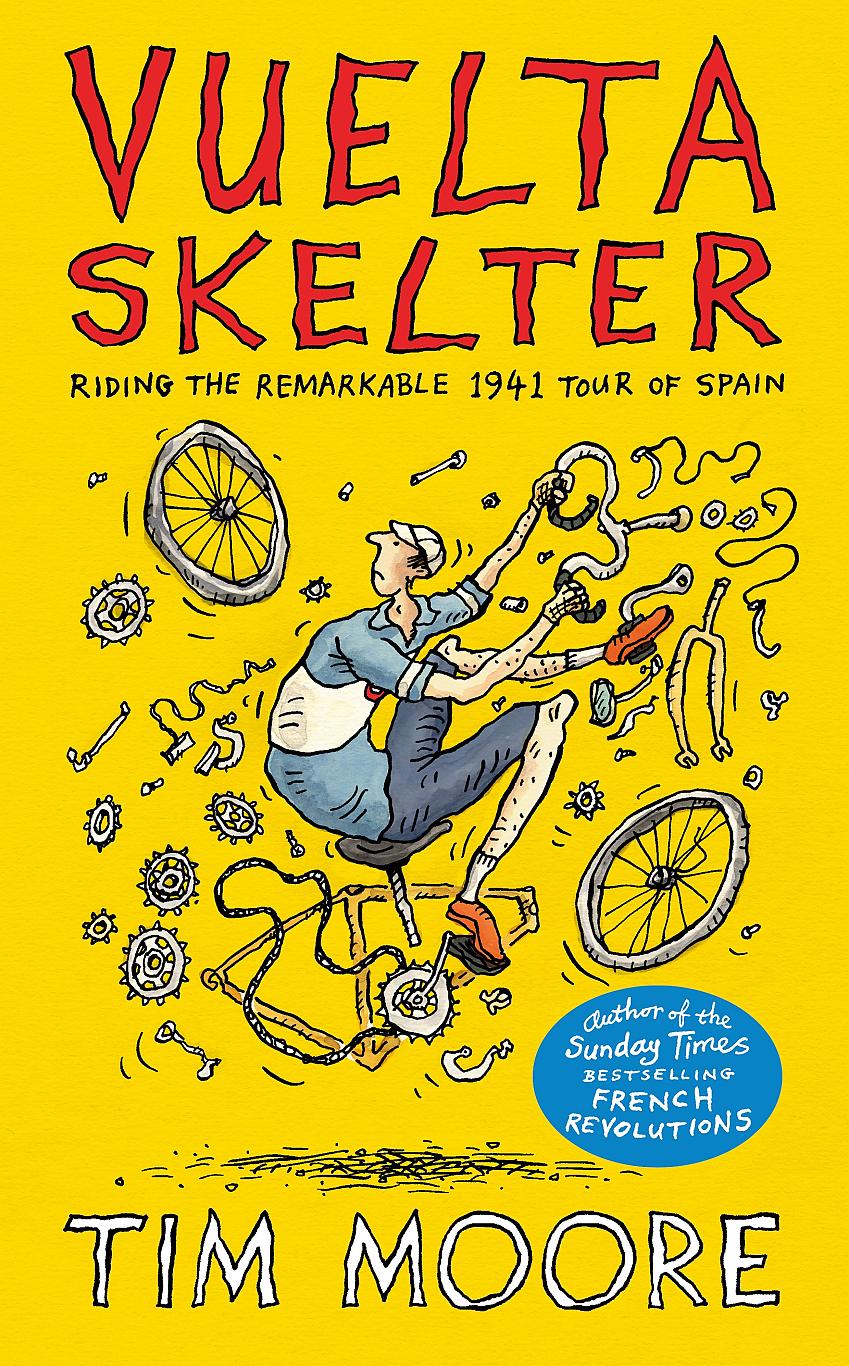