The marketing of bike lights bamboozles us with watts, lumens, candela and lux, but doesn’t explain what they mean. Even when you do know, it doesn’t help much because they each measure different things. But it helps a bit, and with some simple maths, comparisons are possible.

You could measure light energy also in watts and express the efficiency of a lamp as a simple percentage, but the human eye isn’t equally sensitive to all wavelengths, i.e. colours of light. As an animal active in daylight, we’ve evolved to do best with what the sun produces most of. The SI unit lumen (lm) takes account of that with a kind of points system: awarding a maximum of 683 lumens per watt, for light in the middle of the rainbow (i.e. green) and lower values for colours either side, tapering off to zero for the infra-red and ultra-violet light we cannot see at all. Read more about that here: http://www.carbonlighthouse.com/2014/02/13/683-lumens-per-watt/.

For light to appear neutral, we need to mix some of the less effective blue and red light in with top-value green, so the best that a white light can possibly be… err, well that kind of depends on how truly white you want it! Expert opinions differ, but the LED industry is aiming for 250 lm/w, with 300 or so the likely theoretical limit.

The current state of the art is 150 lm/w, ten times better than 15 lm/w we got from a halogen bulb. The lamp as a whole is never quite as good as that however, because an LED needs some additional electronic circuitry to drive it, which also takes some power, making the best LED perhaps eight times brighter for the same power input.

Of course that’s only the best LED. There are a lot of lesser LEDs on the market, some perhaps not much better than a halogen bulb. Buyer beware. See my blog on the legality of bike lights for more detail.

Having said the human eye is most sensitive to green, that’s only true in good light. When things get dark, more sensitive rods take over from cones. But we have only have one type of rod cell, so these cannot differentiate between colours. Rods are nevertheless more sensitive to some wavelengths than others and peak (at the equivalent of 1700 lm/W) in the blue-green part of the spectrum. I guess rod cells evolved that way because moonlight is also biased towards blue, but now I really am guessing! Anyway: blue light gives more bang for your lighting buck in generally dark conditions, so modern headlights, for bikes as well as cars, often have a blue tinge.

Ideally we should use a different 'scotopic' definition of the lumen for low-level lighting, that gives more 'points' for blue and even less for red, so as to give these light due credit for their greater actual efficacy. If the light is bright enough however, there should be large parts of the scene that are sufficiently illuminated to get the cones working too. So conventional photopic lumens will do.

The reason a red light nevertheless looks red in the dark is that it's putting out light of sufficient intensity to fire up a few of the observer's red cones, and the contrast with the generally monochrome rod-powered scene makes it really stand out.

You may be wondering what happens to those super-efficient rods in daylight. The reason everything doesn't look blue then, is that daylight is too much for the rod cells. They saturate. In daylight every single rod in the retina is sending the same maximum level of signal to the brain, which can't make any sense of that and sensibly ignores it, concentrating instead upon the more interesting differences between different cones.

How much brighter really?

There are two sides to the levelling effect of human perception. On the one hand it takes a huge increase in power or efficiency to make a small improvement in apparent brightness. But on the other hand, you can turn a lamp down to half power and experience only a 25 percent-ish reduction!

Be aware of this when buying lights and don’t be too impressed by big numbers. The ‘inferior’ lamp isn’t really all that different. But if it’s half the price, it will actually cost only half as much money!

Another reason not to be impressed by numbers of lumens is they’re only a manufacturer’s claim, and those claims are hard to test. Sometimes the number quoted comes straight from the LED supplier’s datasheet. There is no guarantee that the lamp in question drives this LED optimally. If it runs hot it’ll not only fail prematurely, but also yield less light. Or perhaps to avoid failure, a manufacturer might under-run the LED, which also results in below-specification output.

Let us give this lamp the benefit of the doubt and assume the LED does yield all those lumens. They are still no use until they escape the lamp; and quite a lot will be reflected and absorbed by the enclosure or in passing through the lens, so it’s anyone’s guess how many come out of the front. It’s only fair to say however, that LEDs lose less by internal reflection than sources which emit light in all directions, such as bulbs and HID (gas discharge) lamps, e.g. 20% versus 40% losses. But lamps vary. A glass lens for example, absorbs less and transmits more than even the best optical plastic.

Although we don’t really know how many of those lumens emerge from the lamp, it’s nevertheless interesting to know how they relate to the other ways of measuring emitted light. The traditional way of describing the apparent brightness of a lamp is by comparison with a candle. That’s been standardised in the SI unit of light intensity: Candela (cd). One candela is defined as an intensity of one lumen per steradian. 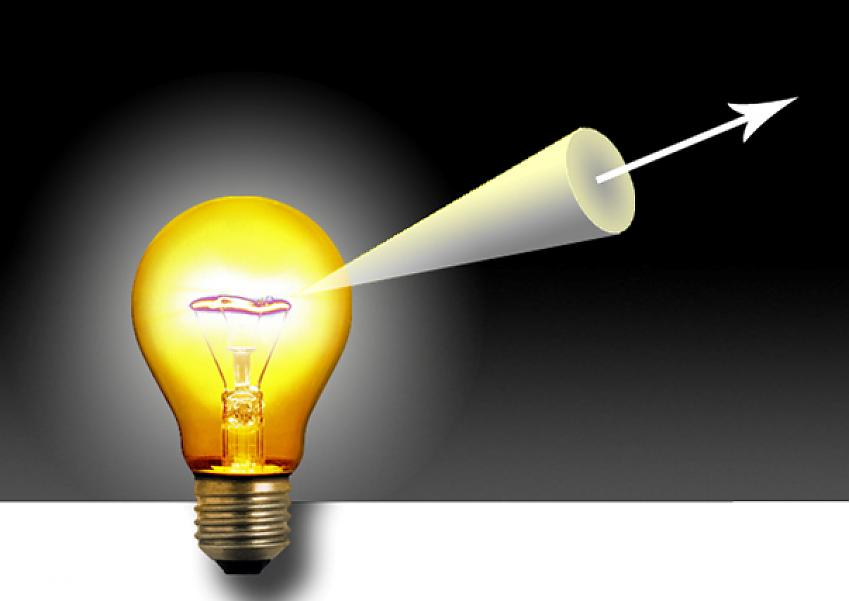 Q: But what the heck is a steradian!? A: It’s a stereo radian, a way of measuring angles in three dimensions. Whereas your regular two-dimensional angle

measures the spread between two lines, starting from a point, a solid angle measures the wideness of a funnel. One steradian is a funnel so wide that the area of its mouth (measured in a spherically curved way) equals the funnel side squared. A more usual way of measuring funnels, or the cone of light produced by a lamp, is the simple angle between opposite sides. It’s hard maths to translate between the two, but I can tell you that one steradian is a 66° funnel, and for anything narrower than this the solid angle is near enough equal to degrees squared, divided by 4200.

The surface area of a whole sphere is 4πr2. So the biggest solid angle you can possibly have is 4π = 12.6 steradians. And since a candle emits light in all directions, it follows that the standard candle, emitting light of 1 cd intensity, that is 1 lumen per steradian, emits a total of 12.6 lumens.

But we don’t want our bike lamp to emit light in all directions, we want to gather and focus those lumens and send them in a specific direction. Assuming none are absorbed (unlikely) in the mirrors and lenses required to focus light into a one steradian, i.e. 66° cone, the intensity equals the number of available lumens and our standard candle thus produces 12.6cd. Focus that light in a narrower cone and it becomes more intense. In a 32° cone it’ll be four times as bright (50cd) and if concentrated into only 6.5° each lumen makes 100 candela (i.e. 1,260cd from our standard candle).

Everyone knows that if you want to see things further away, you need a more powerful torch. That’s because light (except laser light) spreads out according to an ‘inverse-square law’. That sounds technical but is really quite obvious, that in twice the distance the same amount of light has to cover four times the area, so the illumination is one quarter as good. Illumination of a surface is measured in lumens per square metre, or lux for short. Perhaps you’re beginning to see why candela intensity is measured in lumens per steradian, a solid angle which relates area to distance, since that makes all the other sums much easier. Thus illumination in lux equals the intensity of light in candela, divided by the distance squared from the source of that light. Put simply: Lux = Candela divided by metres squared. 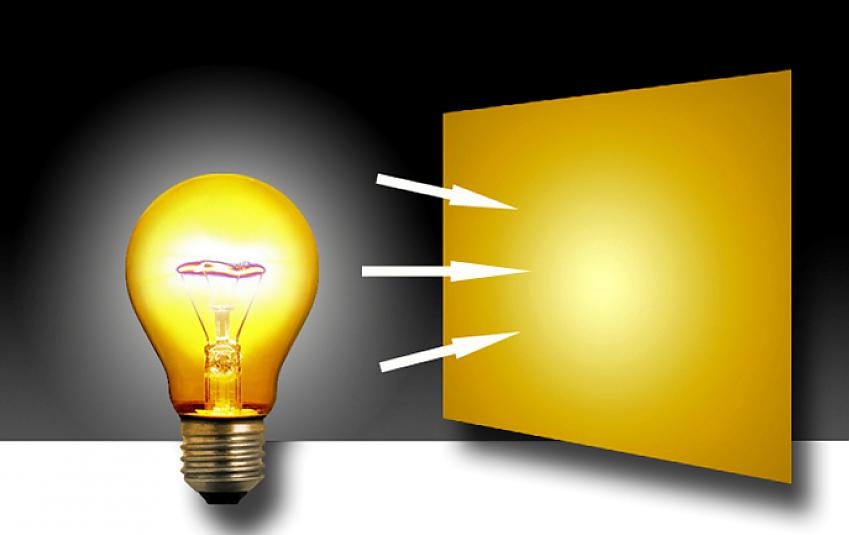 To know how brightly a lamp illuminates something, in lux, you must also know how far away that something is. So it seems nonsensical to speak of a 50lux lamp. At what distance? You will nevertheless find bicycle headlamps, usually dynamo headlamps, described in those terms. That’s because the same firms make headlamps for motor vehicles, which are tested in lux against a screen at a defined distance of 25m from the vehicle. Everyone in the business knows that, so nobody mentions the 25 metres. So 1 lux equals 625cd right? Wrong. Actually, it is right for car headlamps, but bicycle headlamps, as everyone in the business knows… are conventionally tested against a screen only 10m away. So 1 lux for a bike lamp equals only 100cd.

To remove that confusion and facilitate comparisons, you can always convert lux into candela: multiply by 100 for bike lamps, or 625 for motor vehicle lamps.

To put some rough and ready numbers on all of that: a dynamo headlamp is 2.4W, so given a state-of-the-art LED (150 lm/W) we might get 360 lumens. Knock off a third for electrical and optical losses and that’s 240lm emitted. Focussed in a 20° cone, that amount of light has an intensity of 2500 candela, which at 10m provides 25lux illumination.

A simple, diffuse cone of light, of about 20 degrees, is exactly what you get from some bike lamps, many of which are little better than a torch with added bike mount. There’s worse things: a diffuse light may be just what you want for nocturnal exploration of the local woods by mountain-bike, but not so good when you want to go faster on unknown unlit roads. Remember that inverse square law? In order to see far into the distance you need light of great intensity, but if you shine the same intensity of light on nearby surfaces they’ll be illuminated so much more brightly that your eye will adjust to that and be disabled from seeing far ahead.