Southampton cyclists light up the city

Southampton cyclists light up the city

Southampton’s annual Glow Ride saw local cyclists take to the city streets on Friday evening, adorned with festive lights and decorations. This December event has now run for three years, encouraging cycling residents to take over the roads in a friendly, cheerful way and get into the Christmas spirit.

How do you get people out on their bikes once the winter weather starts to set in? Southampton City Council’s seasonal celebration of cycling, the Glow Ride, is one great way. The council’s sustainable travel brand, My Journey, uses the lure of Christmas lights, which this year brought fifty local cyclists of all ages out on the streets for a six-mile ride starting at the city’s Avenue. Participants were encouraged to ‘bling up’ their bikes, carefully wrapping them and themselves in battery-powered fairy lights and tinsel. 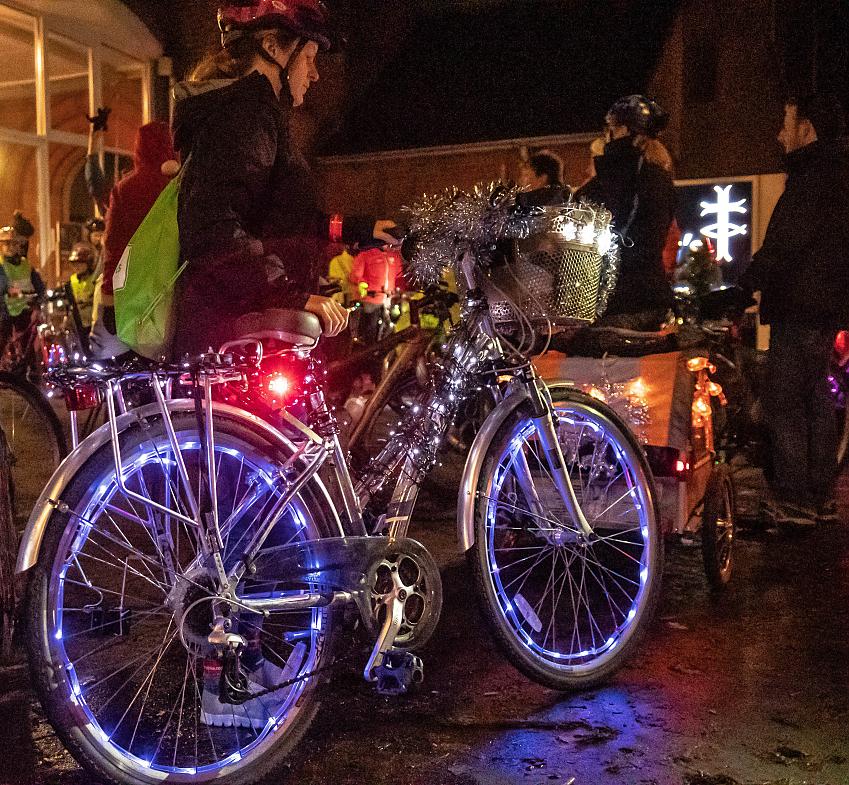 Behind this festive fun is a serious message, a reminder to cyclists to think about their visibility during the gloomiest times of the year, but also show them the dark is no reason to ditch the bike.

The Glow Ride is one of my favourite events, and it has gone from strength to strength.

The Glow Ride was first started three years by Southampton Cargo Bicycles, a Cycling UK Community Cycle Club, meaning there were a number of cargo bikes artfully converted into wheeled sleighs. Before heading out, My Journey provided all cyclists with hot drinks, and free reflective goodies to keep everyone seen and safe on future rides. Cyclists also had the opportunity to get their bike checked over using My Journey's Get Cycle Savvy Pit Stop. 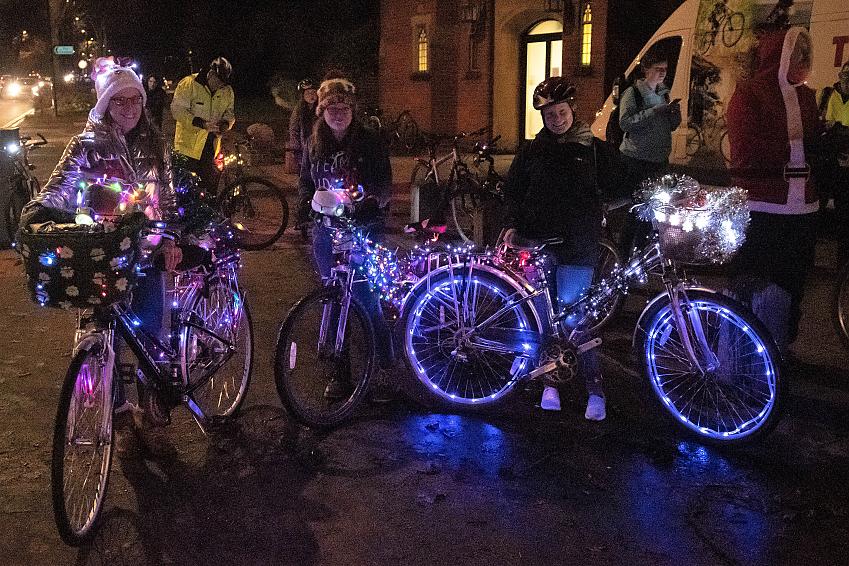 Cyclists getting ready to set off. Photo by Peter Cornish.

Ride leaders from Sustrans, HSBC UK Breeze, Cycling UK and Southampton Cargo Bicycles took participants on loops of Southampton Common, before heading down through the city’s central parks to the Bargate shopping centre, ending at the Christmas market for more hot drinks and shopping.

The Southampton Glow Ride was excellent. I really enjoyed it!

Ruth Magennis, Cycling UK’s Cycling Development Officer for Southampton said: “The Glow Ride is one of my favourite events, and it has gone from strength to strength. Every year more and more people have come on board to support it and get glowing. We hope to make the event even bigger, better and brighter next year!” 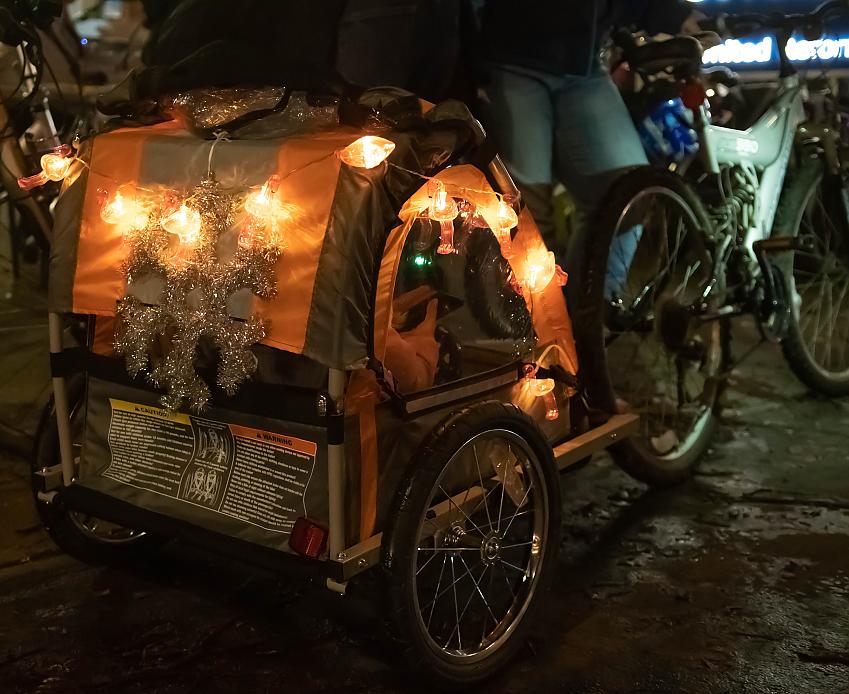 Councillor Jacqui Rayment, Southampton City Council Deputy Leader and Cabinet Member for Transport and Public Realm, said: “The Glow Ride is a special date in the calendar and always proves a popular social event. It’s about getting into the festive spirit and showing that, with the correct approach, cycling can be both safe and fun at any time of year. Well done to everyone who took part – you all looked great!” 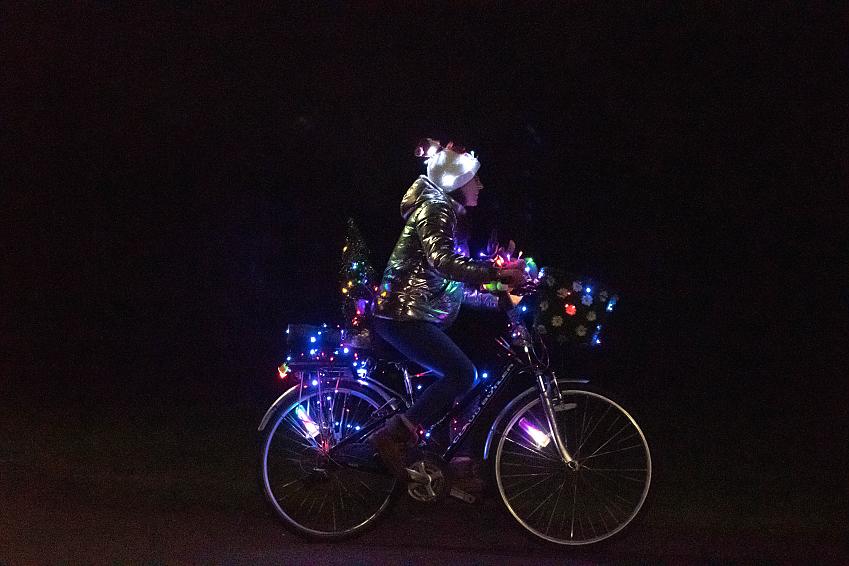 One cyclist even carried a tiny tree! Photo by Peter Cornish

My Journey has just launched its second cycling challenge in partnership with Love to Ride – this time with a festive twist. ‘Winter Wheelers’ is the advent calendar with a difference, with daily goodies on offer from 1-24 December as well as a special Christmas Day draw for a £750 local bike shop voucher. To get involved, participants can sign up on the website in just one minute – and you can be anywhere in the UK.