Photo with permission from Stephen Fabes

Stephen Fabes is a medic with a bad case of wanderlust, so he cycled across six continents over six years. This was not a whistle-stop tour, he covered 75 countries and 53,000 miles stopping at medical projects and helping people along the way. Cycling UK's Victoria Hazael spoke to Stephen about turning his adventure into the book Signs of Life

2020 has been a strange year for Dr Stephen Fabes, who can normally be found working in the A&E department at one of London's busiest hospitals. In between his long shifts during the pandemic, he's also been launching his first book Signs of Life, the story of an epic cycling journey, that saw him ride away from his life as a junior doctor at St Thomas' taking an unpredictable path of discovery as he encountered different cultures and global health inequalities.

The spark for cycle touring was lit when age 17 Stephen and his brother took a trip to Chile and cycled together. When he returned Stephen threw all his energy into life and exams at medical school, yet the desire to go somewhere on his bike and have an adventure kept on returning, "This adventure me and my brother had when we were teenagers, that idea of getting to the end of that and thinking I could just keep going, I never really got rid of that idea. I assumed it would fade into the background and I would get on and march up the career ladder, but it kept nagging, so it wasn't an easy decision to leave [my job] at the time."

After many years of dreaming and two years of planning Stephen embarked on his trip in 2010 - although he admits he wasn't much a cyclist when he set off.

"I did a quick maintenance course before I went, I barely passed but it was really very useful. I would advise anyone who wants to go away on a longer journey to do a bike maintenance course first. I think you need to ask yourself: what is going to leave me completely stuck if it breaks? That isn't just the cycling stuff but kit as well, if you are in a remote area and your stove or your air mattress breaks, you'll need to know what to do.

"I was quite loaded compared to other cycle tourers, I had 40kgs of kit. I got so excited, as everyone does about kit and so I had things like an electronic weather meter, All of that stuff got ditched fairly early on."

After six years on the road, Stephen has plenty of advice for those thinking about doing likewise. "If someone is going off on a big cycle tour, I think I would advise them to think carefully about marrying it with something you are passionate about or interested in. For me the medical interest totally changed the journey, it was something that gave me an extra sense of purpose. You can do this in all sort of ways, I met one guy who was really in to Taekwon-Do and was visiting gyms all over the world. You can get a bit burnt out on long tours so it can bring something extra into it."

Pouring over maps is a lot of fun for some but Stephen advises some serendipity: "Don't plan the route in much detail, this is far more relevant if you are on a long extended cycle journey. If you are crossing a continent try and keep it loose, because [if you] like the uncertainty and unpredictability of travelling on a bicycle... you can then decide at junctions and get advice from other cyclists".

My final tally was 53,568 miles of bicycle travel, but none were longer, or more daunting, than the first.

Hospitality and the stories of those he met along the way make his book far more than just travelogue and medical story. Stephen wistfully recollected, "Getting away from the main roads and taking the extra time to explore the roads you don't quite know where they go. A wiggly small road on the map that goes through small towns - that is sometimes where I had the greatest adventures and where people were most surprised to see me and I got extreme amounts of hospitality".

The most important advice is to just set off, Stephen said "[When] I rolled back over Westminster bridge. I’d crossed 102 international borders and a similar number of cranky immigration officials. I had worn 26 tyres, 16 cables, 14 chains, 12 sets of pedals and five Rohloff hubs to scrap. I had camped for free by roadsides for over a thousand nights - of all the statistics I dutifully collected, this is my favourite because it reminds me of the capacity for freedom in a world more dependable than I’d ever imagined. My final tally was 53,568 miles of bicycle travel, but none were longer, or more daunting, than the first." 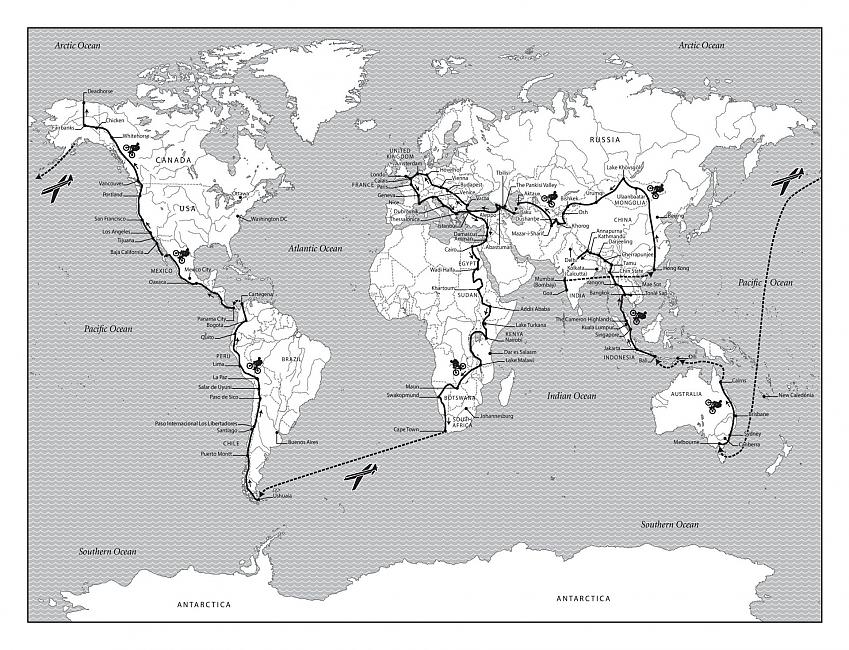 It's one thing to write a diary while you are travelling, it's quite another to turn it in to a book to inspire both compassion for others and adventures by bike."On the road I was reading lots of travel books and keeping lots of journals" he explained. " I got a bit more meticulous as the journey progressed, and when I could I'd post the journals back to my Mum in the UK for safe keeping. I wanted to remember the details and not forget...I had filled 23 journals cover to cover with weary scribblings.".

Fours years since his return to the UK, Stephen has deciphered his scribbling and given many talks about his trip including at the Cycle Touring Festival. Working around his job at the hospital he has turned those journals into a book. It is not the normal cycle touring travel diary but a doctors examination of how different places treat their most vulnerable people and how medical treatment differs across the globe.

Arriving back home in the UK Stephen struggled to adjust to life not on the road, at first living with his mum and looking for a job. "Writing the book gave me a sense of purpose that I needed. When you are cycle touring, clocking up miles each day and watching progress over the map, writing the book was inevitable and a way to process and get used to life back here."

Things were quite different on his return "Six years was a while to be away from hospital life, my peers now are all consultants so that was a bit odd, but I don't have any regrets about leaving, professionally I took a bit of hit I suppose."

Stephen has worked in A&E throughout the pandemic, "Initially it was quite stressful, but the team really came together, during the first wave we felt quite purposeful at a time when others were searching for purpose, I had to go to work and do my job."

"It was impressive to watch the hospital restructure and I felt privileged to be part of it all. There was a period where things got quiet in A&E after that and it's picked up again and now A&E has a lot more patients."

Working has been a bit of a rolla-coaster as Stephen explains. "It was up and down, you are obviously worrying about your own health as well as your patients and all your colleagues. I did get sick at work with a fever..I think I almost certainly had Covid in the early days but I can't be 100% sure, but there 's been no long lasting effects for me."

Signs of Life mixes medicine with cycling, the trip and the book have really helped Stephen. "I think the writing makes you question things and it's quite cathartic, helps you makes sense of situations. I think it makes you a better communicator which is obviously important in medicine and I think it is useful to feel the parallels in different healthcare systems. London is a very multicultural city so you are working and treating patients from lots of different parts of the world. Genuinely the trip really helped me be a better doctor."

Now he's back in the UK, Stephen has a bike he uses a few times a week in London and aims to do a longer trip in his holidays, this year taking time away from the hospital and promoting his book to cycle from Oxford to Devon and then on to Bristol.

"I think I will always go touring as I think it is something I am still passionate about, I know I have got the huge and epic journey out of my system, but I still have lots of places that are still on my wish list". 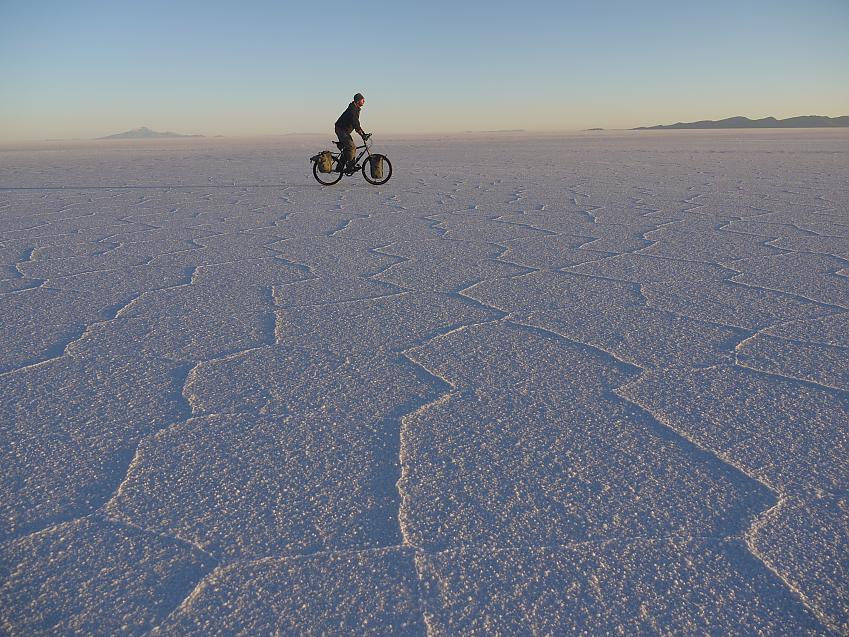 Signs of Life: To the Ends of the Earth with a Doctor

There's a review of the book in the December 2020 issue of Cycle magazine. 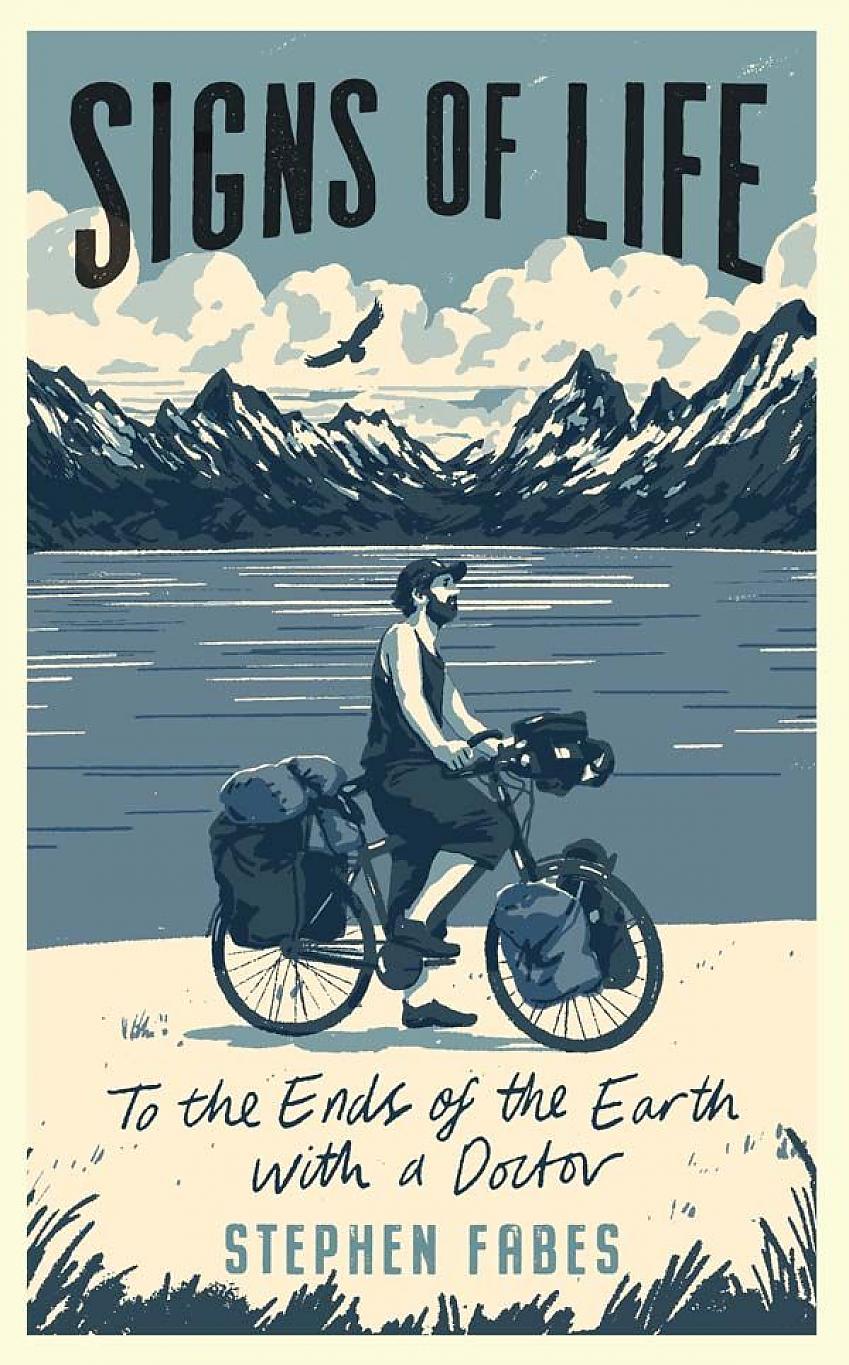 To find out more about Stephen or to read more of his writing about cycling, running, adventures and being a doctor read Stephen Fabes's blog. There are hundreds of photos from his trip to look at too.