Cycling UK member Neil Hemingway finally completed an adventure he started back in 2010, when he got hooked on the idea of getting on his bike and completing Cycling UK's British Cycle Quest. BCQ sends riders out to explore every corner of England, Scotland and Wales, collecting quirky facts about local landmarks and noting them down.

Neil’s BCQ story begins back in the autumn of 2010. He’d got back on a bike just a year previously, having only cycled before when he was a teenager. But something in him decided to take on the monumental cycling challenge – and there was never any doubt he would see it through to the end.

“I just thought, this is for me,” said Neil, who finished the 402 points in May this year. “It would suit me – from a motivational point of view I was a man on a mission!”

Like many who get into British Cycle Quest, Neil started out by ticking off his local landmarks in his home county – in Neil’s case, North Yorkshire. In nearby Egton, he found his answer to his first question – “Opposite the garage is Egton Cross – in whose memory is it in?” But Neil was soon very far from home.

“The trips would range from three days to three weeks, and I’d plan everything and all the accommodation in advance,” sais Neil. “When I started I was still working, but when I retired it was much easier.”

Of all the 67 counties he cycled across, it was visiting the islands off the north coast of Scotland that was the most awe-inspiring.

I remember stopping on route and being surrounded by a herd of goats. It was cute until they started nibbling at my jacket and my panniers.

“Orkney and Shetland really stuck in my mind. They are such far-flung places, it’s almost as if you are in this different life. Shetland in particular was not like anywhere I had ever been before.

“I liked Kirkmadrine in Dumfries and Galloway too. That was a lovely day, and I took one of my favourite pictures. I remember stopping on route and being surrounded by a herd of goats. It was cute until they started nibbling at my jacket and my panniers!” 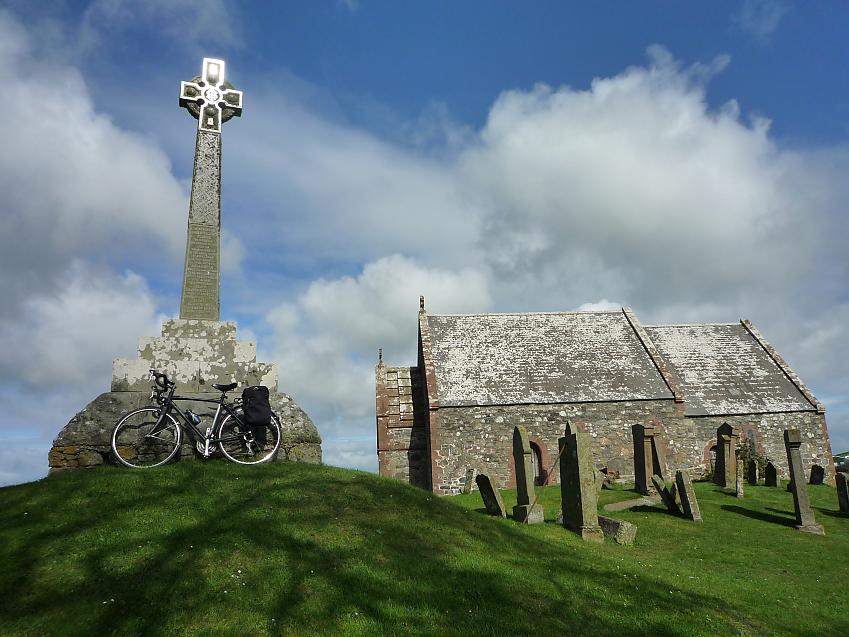 Neil tracked every ride he did with a Garmin, but at the end of every trip he’d go back to the paper maps in his garage.

“I got two of those 4-inches-to-one-mile road atlas books – I had to get two because they are double-sided – and took all the pages out and created this huge map of the country. I had to split in two because it was so big. Each part was 8 foot high,” said Neil.

“I then marked out all the BCQ points with some small push pins, and when I visited a place I changed the small pin to a big pin. It was very satisfying watching it come together.

“I have so many lovely memories of meeting people too. I do particularly remember one of the points in Liverpool, the Liver Building, as the security guard wasn’t very happy about me leaning my bike against the plaque to get a picture. As soon as I explained what I was doing people were very encouraging.”

Neil’s ‘final pin’, as it were, was the oldest surviving wooden church in the world, located in Greensted, Essex. (Question: “To the right of the entrance – which century is the Crusader’s Grave?”) He visited in May this year – seven and a half years after he started. 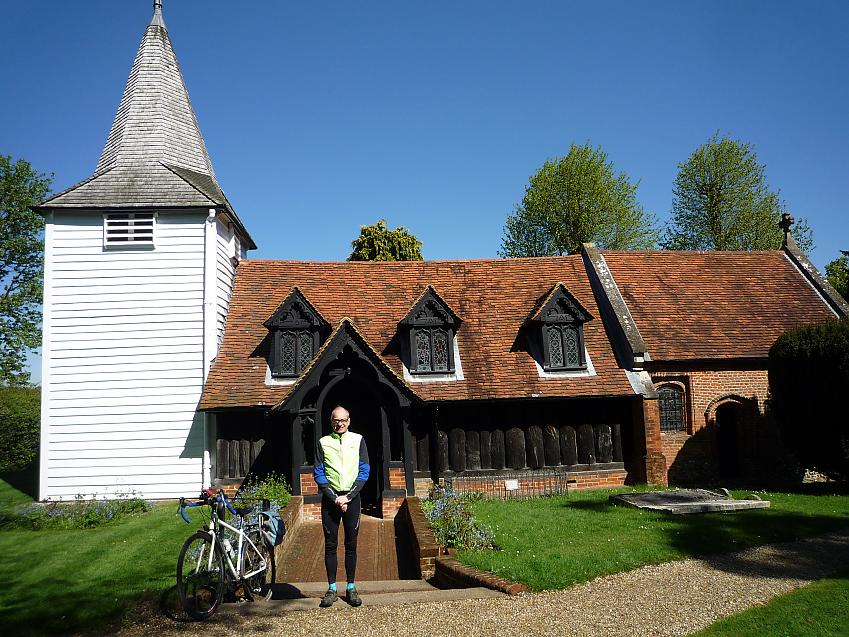 The church in Greensted, Essex

“It was quite an emotional moment for me, and it was a beautiful sunny day,” said Neil. “The church warden kindly took a photograph.”

With all 402 locations visited, questions answered, and answers dutifully recorded, Neil received a shiny platinum medal, kindly presented to him by CTC Teesside.

But that’s far from the end of the story – surprisingly, Neil didn’t fancy taking a break from his bike. 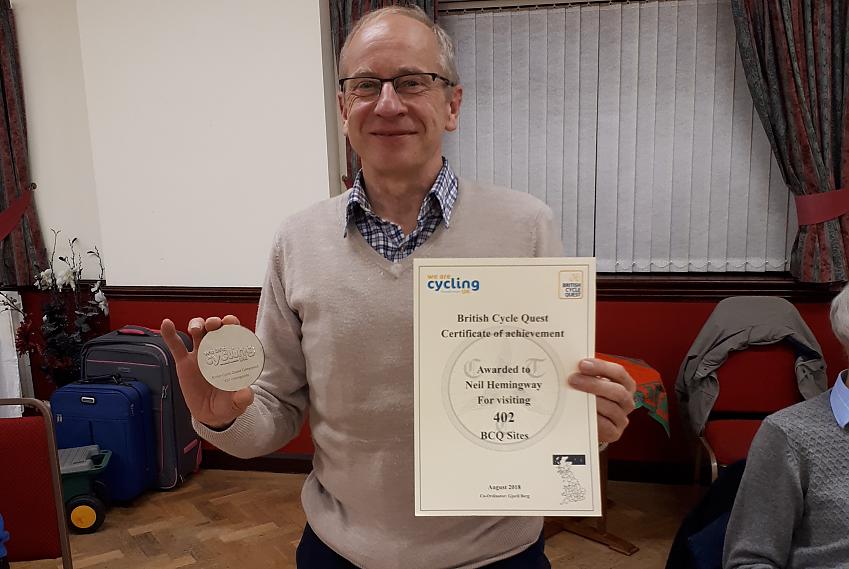 “After I finished I immediately set about planning my three-week cycling trip to Northern Ireland, as it’s not included in BCQ and I had never been,” laughs Neil. “I did half-heartedly have a think about setting the questions myself, but for six counties and six questions per county it would be quite a lot of work!

“If it was ever included in the future, I would be straight back over there. It’s a beautiful place to go.”

And Neil made a surprising discovery about himself on the BCQ – taking his cycling in a whole new direction. 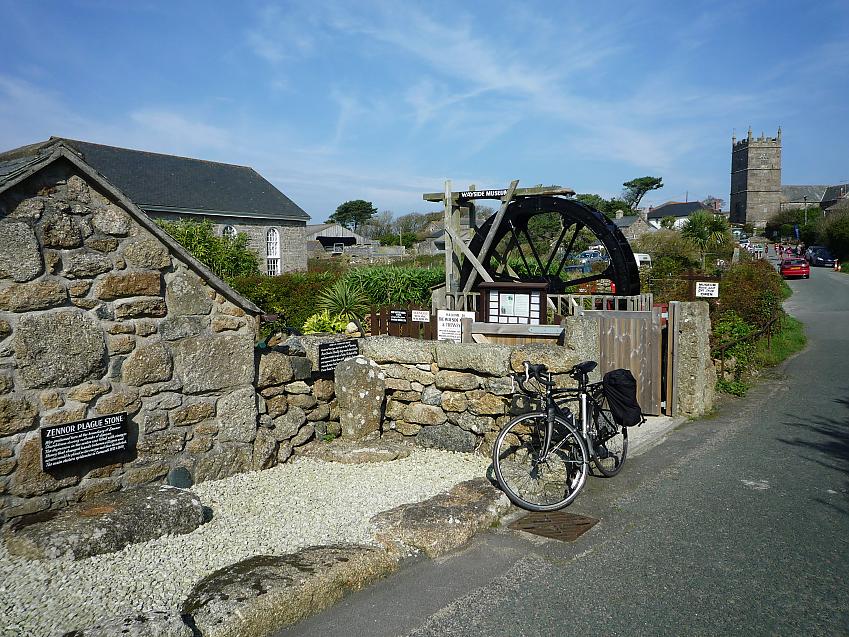 Neil's bike in Zennor, Cornwall, the furthest south-east he went

“Having been around all of these places I came to realise I quite liked rough track, which touring bikes aren’t really suited for. So I got my very first mountain bike and went on a mountain biking course – I’m now exploring all the rough bits that were very hard on the touring bike!”

British Cycle Quest is a unique cycling challenge that encourages participants get out and discover new places around the country. Wherever you may be, there will usually be a checkpoint or two within cycling range.

Why not try to find the British Cycle Quest points where you live.