A guide to insuring your bike

If your bike is worth more than £500, or you’ve got more than one, you might want to consider cycle-specific insurance

A guide to insuring your bike

Insurance isn’t the most exciting of topics, but when it comes to protecting your precious bike, it’s something we all need to think about. Cycling UK digital officer Rebecca Armstrong looks at why you should insure your bicycle

No one likes to think about insurance. Most of the time it feels like paying for something that you never actually use.

Additionally, there are also 16,294 reported cyclist casualties in Great Britain according to Government statistics. Insurance really is something we all need to consider.

Encouragingly, these statistics are falling. In the year to December 2020, the number of reported cycle thefts in England and Wales was 81,193, while the overall number of cyclist casualties in Great Britain has decreased each year from 2014 to 2020. This is against a backdrop in which the number of people cycling has increased extensively.

But this doesn’t mean you can get complacent. Especially as the picture is more complicated in Scotland and Northern Ireland. In the former nation, the figure is down from 6,056 in 2017-18, but shows an increase on 2019-20’s 4,600.

Insurance, then, remains important, but it can be confusing. There are several types, offering various levels of protection, often couched in unhelpful legalease. This guide will explain what’s on offer and help you make the right decision when it comes to choosing (or not) the right insurance for you.

This will be familiar to anyone who drives as well as cycles. It’s the legally mandated lowest level of insurance required to get your car on the road. This type of insurance provides the insured party – you! – with protection against claims resulting from injuries and damage caused by you to other people or their property.

In this case you are responsible for the collision and you have caused the resulting damage. Hence the term ‘liability’. If someone brings a case against you, liability insurance will cover you for any resulting pay-out.

This type of insurance doesn’t cover you for any injuries to you or damage to your property – whether caused by you or another party. It also doesn’t cover criminal damage or theft of your bike.

Which brings us to the second type of insurance. You’ll often see this simply called cycle insurance. It’s equivalent to fully comprehensive car insurance and as the name implies it covers everything.

This means your bike is protected if it gets stolen (so long as you’ve taken reasonable precautions to prevent this) and if you suffer an injury or damage to your bike caused by you or by another person.

Do you need cycle insurance?

Unlike with cars there’s no legal requirement to insure your bike. But that doesn’t necessarily mean you shouldn’t do it.

At the very least you should get liability insurance. If you’re responsible for damaging someone else’s property, it can end up costing tens of thousands of pounds, while pay outs for personal injuries can be five or even six figures. Legal fees can also rack up.

Whether you need comprehensive insurance depends on what bike(s) you own and the type of cycling you do. If you have one bike that cost under £500 that you use for the odd trip to the shops or the pub, you probably don’t need full insurance.

However, according to research by Aviva, on average people in the UK spend £835 on a bike; e-cycles are a costlier £1,200. National bicycle database BikeRegister says the average cost of bikes on its list is £1,000.

Many people have several bikes – and some of those cycles might be a child’s pride and joy – or may be relied upon to get to work or elsewhere. Many cycle-specific insurers offer a multi-bike or family discount. In these cases, dedicated cycle insurance starts to look a lot more attractive.

Don’t assume that your bike will be covered by your home contents insurance – check the fine print carefully. Research by financial information service Defaqto found that 12% of providers don’t cover bikes at home and 18% of those that do only cover up to a value of £500 (some providers set the limit as low as £350). Similarly, only 12% of policies include cover for possessions while away from the home as standard.

With many policies you can add higher-worth items or those you’ll mostly be using out of the house – which clearly includes cycles – but this will increase your premiums. Most contents insurance also has a high excess, so you’re unlikely to get much back on any claim unless your bikes are very expensive. You also need to ask yourself if you’re willing to lose any no-claims bonus for the sake of your bike.

You should also consider if you want cover for accessories, clothing, helmets and so on, as well as for events such as sportives or charity rides. These are unlikely to be included with home insurance. Cycle insurance will either already include them or have the option to add them – for an extra cost.

There may be special requirements to insure your bike: often they need to be kept inside or locked to a solid object when stored at home. When making a claim, you might need proof of purchase which shows the original value of the bike when you bought it. This can be tricky if you bought it second hand. 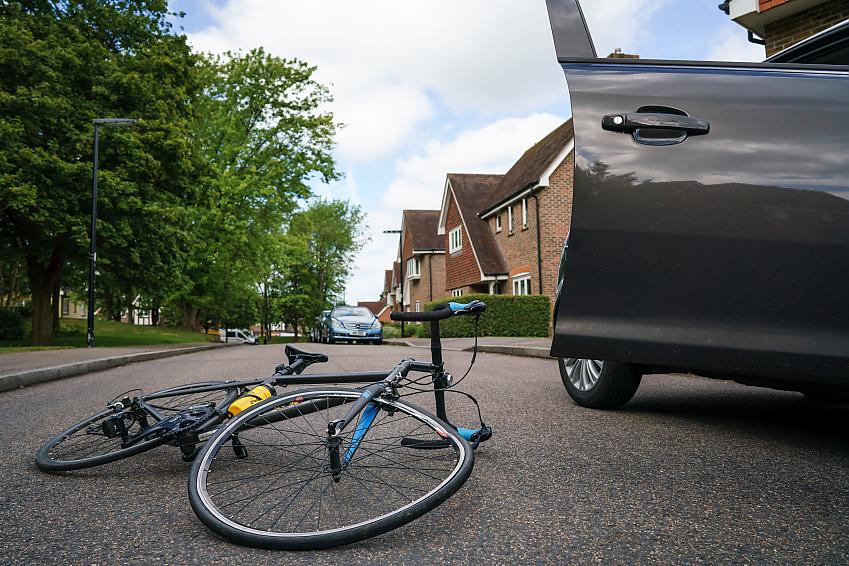 If your bike is damaged in a collision that wasn’t your fault, having dedicated cycle insurance could bring peace of mind; photo: Julie Skelton

Finally, what about injury? Check if the policy covers such things as permanent injury, physiotherapy or dental work.

And one bit of general advice: whatever type of policy you go for always read the fine print.

Keep in mind that a cycle-specific insurer will also likely better understand your needs and have more experience in dealing with bike-related claims. This could provide much-needed peace of mind if you do have to make a claim.

The main consideration for most people is how much the policy costs. Many companies have online forms you can fill in to get a quote. Let’s look at two that offer a dedicated bicycle insurance policy: Yellow Jersey and Pedal Cover.

Both forms were easy to complete, asking for make and model of the bikes, where you live and contact details. For the purposes of this test, there were two bikes at an address in east London, a road bike worth £2,500 and a tourer costing £900.

Both policies include liability insurance up to £2m, accessories and clothing and helmets up to £250 each and cover for injury, physio and dental work. They both offer multi-bike discounts and cover you if a family member is riding the bikes.

The bikes are fully covered for theft, vandalism or damage at home or away. Both have a low excess of £100. Yellow Jersey’s also includes a free DNA+ kit, a bicycle security marking kit worth £36.

The premiums – what you pay – were similar: £219.45 per year for Yellow Jersey and £251.16 per year for Pedal Cover. So it really comes down to which company you prefer, or if that security kit is a deal maker.

How to lower your premiums

Prevention is better than cure, and if you don’t make any claims you’ll build up a no-claims bonus.

According to Mark Cleland of the British Transport Police insurance is important because “it gives people an opportunity to replace a bike if stolen.

Both Yellow Jersey and Pedal Cover require that bikes are locked using Sold Secure gold-standard locks if they cost more than £1,500 and a Sold Secure silver-standard lock for bikes that cost less. See the sidebar for more advice on keeping your bike secure.

You might want to consider becoming a Cycling UK member – if you’re not already. Membership includes free £10million liability insurance. In a recent survey, current members voted this as one of their main reasons for joining up.

Cycling UK also works with both Yellow Jersey and Pedal Cover to offer members discounts. You get £50 off your yearly premium with Yellow Jersey (membership costs £48 per year so this recovers that outlay) and a 25% renewal discount.

Pedal Cover’s home and bicycle policy combines home and contents insurance with comprehensive bicycle insurance in one policy, often offering a good option if you have multiple bikes. Cycling UK members benefit from 15% off their home and bicycle combined policies.

Ultimately, it’s your decision. But insurance will give you peace of mind should the worst happen.

How to stop your bike from being stolen

Almost 300,000 bicycles are stolen every year in England and Wales alone, so it is really important that you know how to protect your bike. Cycling UK’s Victoria Hazael takes a look at what you can do to make it as difficult as possible for a thief to cycle away with your precious steed.

Lauren Purdy, Cycling UK’s digital communications and media officer, offers some tips to help you avoid someone else riding away into the sunset on your beloved bicycle.

Security: How can I stop my bike being stolen?

“Don’t leave your bike unattended unless it’s behind a locked door or secured to street furniture.” You can’t make a bike 100% thief-proof, but you can reduce the risk, as Dan Joyce explains.

What to do if your bike gets stolen

Did you know only a third of cycles owned in the UK are registered? Cycling UK’s digital communications and media officer, Lauren Purdy, spoke to superintendent Mark Cleland from the British Transport Police to get some tips on what to do if your bike gets stolen.

Security: How can I stop my bike being stolen? View

What to do if your bike gets stolen View