Since winning Gold for handcycling at the Paralympics in Rio, Karen Darke has been embarking on a series of adventures. She and two friends tackled the Pacific Coastal Cycle Route, which is 3000km from Canada to Mexico. Here are the highlights of her journey.

Niall, Rich and I were on the first section of our long road following the Pacific Coastal Cycle Route from the American Adventure Cycling Association and already I had Christopher Cross’s song 'Ride like the Wind' playing over and over in my head: "And I’ve got such a long way to go…to make it to the border of Mexico. So I’ll ride, like the wind…to be free again.” We really did have a long way to go: 3000km of very varied road, trails and terrain, from Vancouver, Canada, through the states of Washington, Oregon and finally California, whose long length would lead us to Mexico.

The Pacific Ocean would be at our side for 39 days, a constant steady companion, and we would need to cover an average of 80km a day. I might be a Paralympic handcyclist, but touring day in day out, moving ‘slow and heavy’ was a different game completely to the one I’d become accustomed to of late. I wondered how my arms would fare. I felt intimidated. 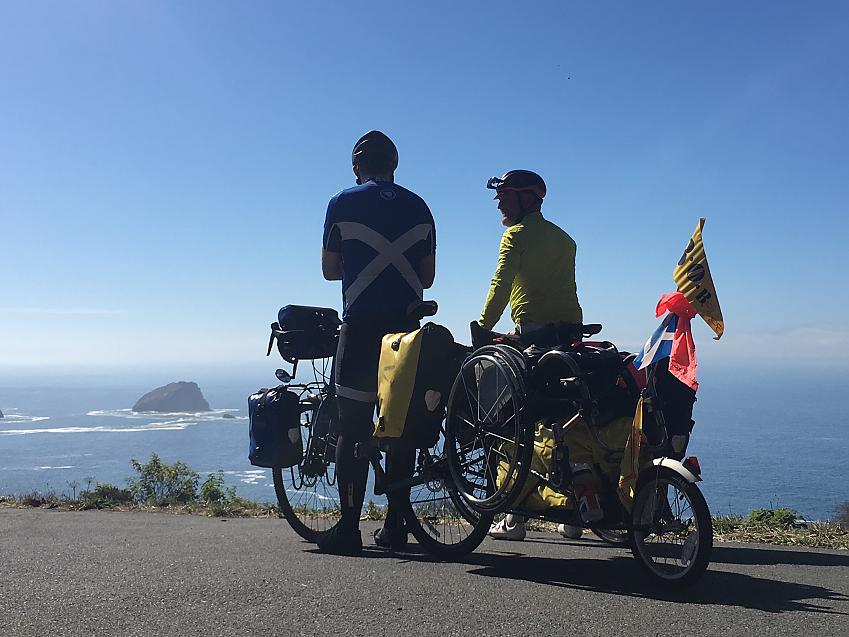 Our route began in downtown Vancouver, following bike trails intertwined with highways and bridges that led to the US border where at last the sprawl thinned. We were happy to find rural country, farmland and quiet lanes meandering through fields of fruit. In Washington there were plenty of state forest parks to camp in, and we found vistas crowned by the snowy volcanoes of the Cascades and the majestic slopes of Mt St Helens, and evening skies streaked salmon and slate, spectacular sunsets wrapping up long days in the saddle.

A week in, we limped towards Oregon, our bodies somewhat shocked by the shift from regular life to hours on the bike, and the realisation that cars and RV’s in America are big and noisy. We grieved that background America did not always provide the oxygenating tonic we had desired. On occasions the traffic would pulsate like blood, but away from the buzzing arteries were some surprising and idyllic lanes and sections of bike path and the route tries whenever possible to navigate via those. I reminded myself that we were there to experience the big US of A and all of it’s facets. If we were seeking singletrack peace the whole time, we should have gone to the Outer Hebrides. 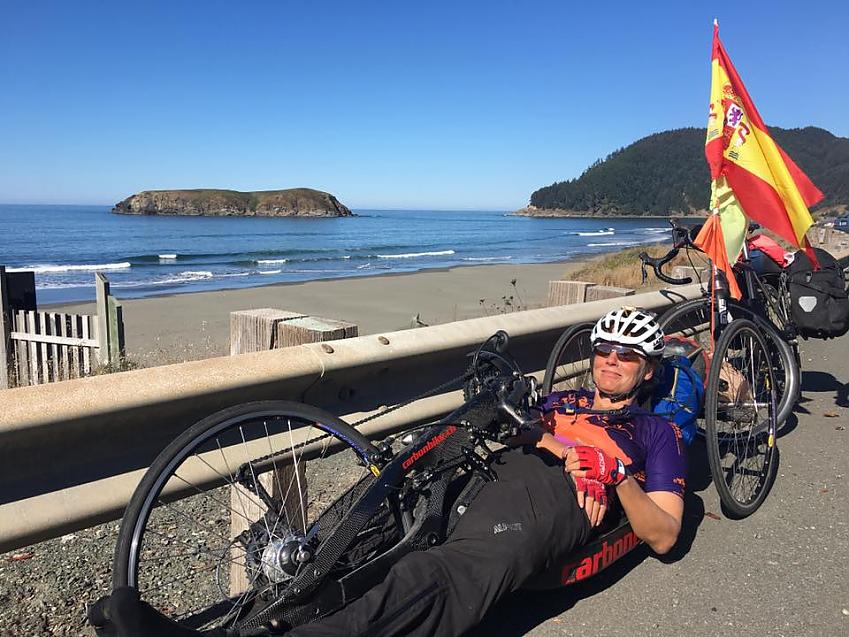 Just the three of us

The three of us had been thrown together by chance and opportunity. There was Niall, Herculean, towing a full pannier load plus trailer with my wheelchair on top, unsure of his physical ability but carrying off a feat of strength that most would or could not entertain.  "Good luck sack-wagon man" a passing cyclist had remarked. Rich, looking for escape or a new direction, was like an excited puppy with ADHD. I appreciated his unwavering certainty that we would make it to Mexico and maybe still have time in lieu for a road trip inland at the end. ‘Wanderlust me’ made us up to three: happy as long as my ass is moving and the sights and experiences keep coming, and if my body can stay healthy to cope with the extremes I ask of it. Paralysed from the chest down and pedalling a handbike, I know that I’m asking a lot of my shoulders.

The adventure felt full of the promise and freshness of a new spring, yet the leaves turned autumnal almost quicker than the turn of our cranks. We rose with the sun and chased it to dusk, too far to go in too little time, a daily challenge to stop before moonlight. I felt daunted. Would we get enough rest so as not to physically or mentally break ourselves? Would we become firm friends or drift apart with the miles and our differences? I reminded myself that it didn't really matter how far we got or what happened along the way. It was after all an adventure: a journey with an unknown outcome. I would take each day as it came, in manageable bite size chunks. I would bank the memory bytes, like the colony of sea lions we’d passed, barking and basking in the afternoon sun - special moments that would remain in texture long after the trip had come to an end.

"It's far too early to stop yet" Niall said, the sun still too high for long shadows or golden tints. I knew then he had caught the bug, the addictive virus of cycle touring. He had been anxious about this journey too, a torn calf muscle not helping his training plans, but he was choosing to keep moving rather than kick back and rest up early in a random RV park. We kept on rolling. 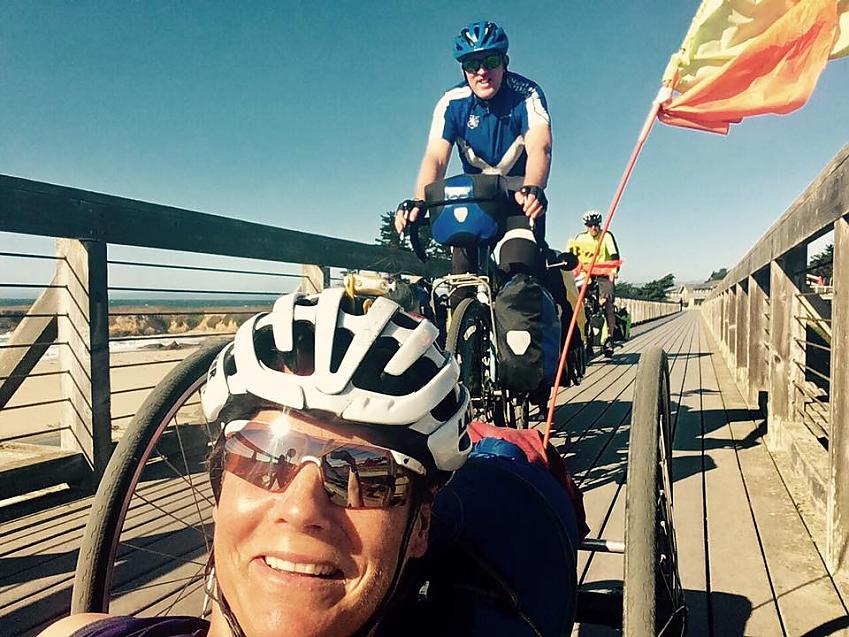 As we sun-and dream-chased south, we left the colder, wetter north, for the kaleidoscope of colours, sounds and smells of California. Our senses were infused with the aromas and energy of things we rode through: the mystical Giant Redwood forests, the heavy wafts from hidden plantations of cannabis, the salty kelp piled in by the Pacific rollers and the smog of wildfire that tinted the sky and filtered the sunlight. Added to that were endorphins from long days and the physical intensity of tackling the rollercoaster ribbon of Route 1 as that hugs the wild coastline. It was no wonder that sleep became restless and our dreams vivid as we approached San Francisco, but we couldn’t help but grin as we crossed the iconic Golden Gate.

Further south still, we slept bare to the stars, dehydrated and restless in the burning Santa Anna winds.The heat was crazy, 45C with sandblasting headwind. We rose in the night for a dawn ride through Malibu and onto Santa Monica, early morning joggers and surfers sharing the trails across the beach. Finally we were forced to traverse central Los Angeles in the glow of evening sun, navigating a maze of busy streets and three-lane highways. Invisible potholes and street debris meant punctures, yet more punctures, and broken spokes. Night fell and an explosion cracked the night air - gunshot or maybe just a firework - and sirens screamed in the distance. But we felt untouchable, riding the night, flying towards Long Beach, chasing to Mexico. We felt slick and calm, more oiled than our chains. Much later we rolled into Long Beach, and the magic was palpable. The lights of the cruise liners and ferris wheel twinkled, the moonlight silhouetted palm trees, families and couples strolled in the hot night air.

The border finally came, an unexpected and moving experience, 38 days of riding to reach it. We followed a dusty trail that became dirt, alongside the imposing grid of the border fence. We’d heard there was ‘Friendship Park; at the border. It was hardly a park, but a patch of dirt between a double fence, the greenest thing the turquoise of the ocean that the fences extend into, and the uniforms of the military guys stationed to intervene with any swimmers or tunnel diggers attempting to cross from Mexico. A young guy stood at the fence, immersed in its shadows with his head bowed, hands in his pockets, being with his loved one through the dense trellis. I felt like a voyeur of heartbreak and my eyes welled, imagining the separation and the tough choices made for dreams of a better life. I felt our fortune, grateful for the time, resources, freedom and adventure of our Pacific cycling odyssey.

We rode on a little further, not quite like the wind, and into Mexico. 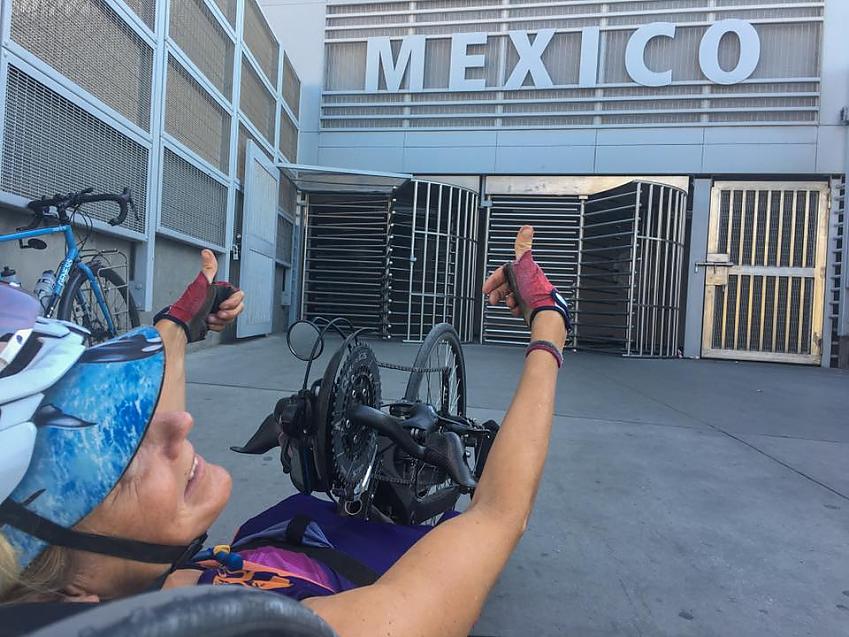 Karen Darke is a member of the Adventure Syndicate which is a Cycling UK affiliated group. There is more about Karen's adventures on her blog.

The Canada to Mexico ride along the Pacific Coast was part of a project, Quest 79, initiated by Karen to encourage people to stretch themselves, take on a fun challenge and discover something new about themselves. It is also to raise awareness and funds to support the Spinal Injuries Association.

Route: Following the Pacific Coast on US 101 and Route 1. Avoid peak tourist season.

Conditions: Can be damp in Washington and Oregon in spring or autumn with chilly nights, but dry and warm in California J

Equipment used: I used a Carbonbike handbike. My buddy rode a Genesis touring bike supplied by Alpine Bikes, Scotland, with a Bob Yak trailer to tow the wheelchair and kit.

I’m glad I had… My extra warm sleeping bag and a thermal base layer. It was quite chilly on those northern nights!

Next time I would… I would plan for more time so that we weren’t on such a tight schedule. It would have been nice to have had more rest days, not only for the body but to explore more places along the way.

Go to the Adventure Cycling Association website to buy the digital route files or the paper maps. I’d recommend the latter as they have all the detail of bike paths and the quieter roads, are waterproof, lightweight and robust.

Our return flight with British Airways was direct from London to Vancouver, and returned from San Diego via Chicago, though some direct returns were available too. We got a bargain return ticket in a BA sale for around £400! Then simply pack your bags, find some time and do it. I’d recommend taking more time that we did so you have more time to explore the sights or simply to relax and absorb some of the beaches and forests on route. Be prepared though for some busy sections of road between the nice bits…take bright lights and visible clothing!