When I realised we couldn’t get public transport to our first destination, or back from our last destination, I started to doubt whether the West Country Way was worth the bother, but it definitely was. Never have I completed a route that offered so much variety in scenery, and in such a short period of time too. If you think both moors would look largely the same, you’d be mistaken, and I advise you to go look for yourself.

Day one - Plymouth to Castle Drogo

We found a free parking space next to a residential area in Plymouth, loaded up our bikes and headed out of the bustling city just before lunch time. We crossed the mouth of the sea and headed north away from the commotion of the roads. The tarmac cycle paths slowly dissolved into dirt tracks on disused railway lines, and buildings were replaced with trees and blue skies as we traversed a stream that would mark the exact boarder between Plymouth and Devon. It didn’t take long to reach the moors at all, less than two hours and we had unwittingly done two thirds of the day’s climbing already. As the country lane reached its end, we pushed open a large wooden gate to reveal a huge wide open playground for us to explore - Dartmoor National Park.

After 20 miles of raw, rocky bridleway, one challenging technical climb, and epic views of wild heather and misty moors, we reached Princetown. There were campsites and accommodation here, but I merely filled up on water in a friendly local cafe and joined the gang for more moorish moorlands.

The GPX route followed public access ways and quiet countryside lanes that did a good job of circling large hills, allowing us to admire them from a far without cursing their names. We pushed on to the 40 mile mark where we came to the edge of Dartmoor at the quaint little village of Chagford. As the night drew in, we grabbed some supplies from the village stores and slipped into one of three pubs on offer for our dinner. The Three Crowns were very understanding of muddy shorts and offered to store our bicycles in the rear courtyard while we ate. The food (and beer) was very welcome, and although the beds seemed inviting, we trundled on in the dark for a few miles and camped out of sight in the woods near Castle Drogo.

Though we never saw the castle itself, the grounds around it were absolutely stunning. We skirted around a rocky cliff edge with hardy wild flowers blooming in contrasting greens and purples. A little later on, the scenery changed once again to twisted, ancient woodlands lined in a bright green mossy carpet, which was filled only with the sound of bird song and babbling brooks. The rest of the day would vastly be made up of tarmac country lanes joining the two moors, complete with a rather majestic little wind farm a top a ridge, with lovely countryside views. Though the tarmac was a tad dull, it still felt ’away from it all’, zig-zagging through the National Park with no hedgelines to spoil the views, and it certainly clocked up the miles easily.

After a total of 80 miles (40 on each day) we had reached Knowstone where we stopped in The Mason Arms for dinner. It was still light and we all felt like we had plenty more to give, so, with the knowledge of the final 30 miles being the hilliest, and knowing we needed to drive back to Plymouth for our cars the next day, we decided to press on for as long as we could. After 5miles, we were back in the wilderness of Exmoor National Park. As we crossed the border of Somerset, we were greeted with quintessentially English green rolling hills and flocks of sheep everywhere. A far cry from the heather-lined wild moors of Dartmoor with the odd wild horse and long-haired cow. We carried on until dark and slept off the beaten track next to a stream. 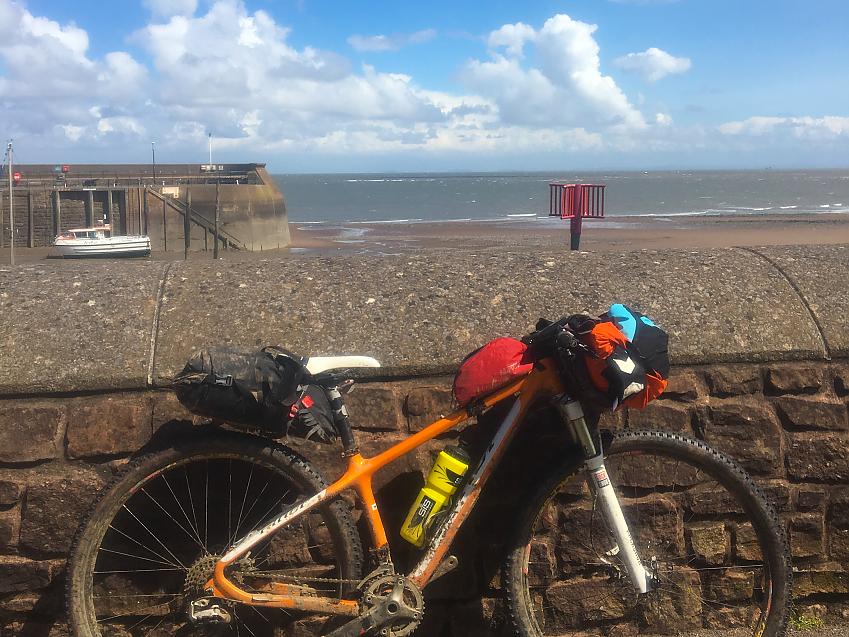 After bathing in our private stream, we dressed and headed for the coast. We skirted around Dunkery Beacon (I had seen the views from the top before, but if you haven’t it’s worth adding it to the journey) and climbed up towards the edge of the cliffs to see the sea. The sun was shining on the many shades of purple from the flowers that lined the coastal paths. The fields lay over the hills like patchwork quilts, with seemingly inviting (yet very cold) streams in the valleys. After a few grassy climbs we trundled our way along the relatively flat bridleways along the top of the cliffs, veering off the GPX route here and there to take on a few more technical descents in the woods just for fun. And then… fish and chips on the seafront in Minehead, of course.

Having done most of the leg work in day two, we had plenty of time in the afternoon to grab lunch and drive back to Plymouth to retrieve our car. It also meant that day one became a warm up, and day three was somewhat of a cool down, and was far less stressful knowing we had plenty of time to complete everything, even with mechanicals and mishaps. I thoroughly recommend doing it this way, but, if you can sleep somewhere the night before you start, a keen cyclist could probably get up early and get this route done in two days if you had lights. 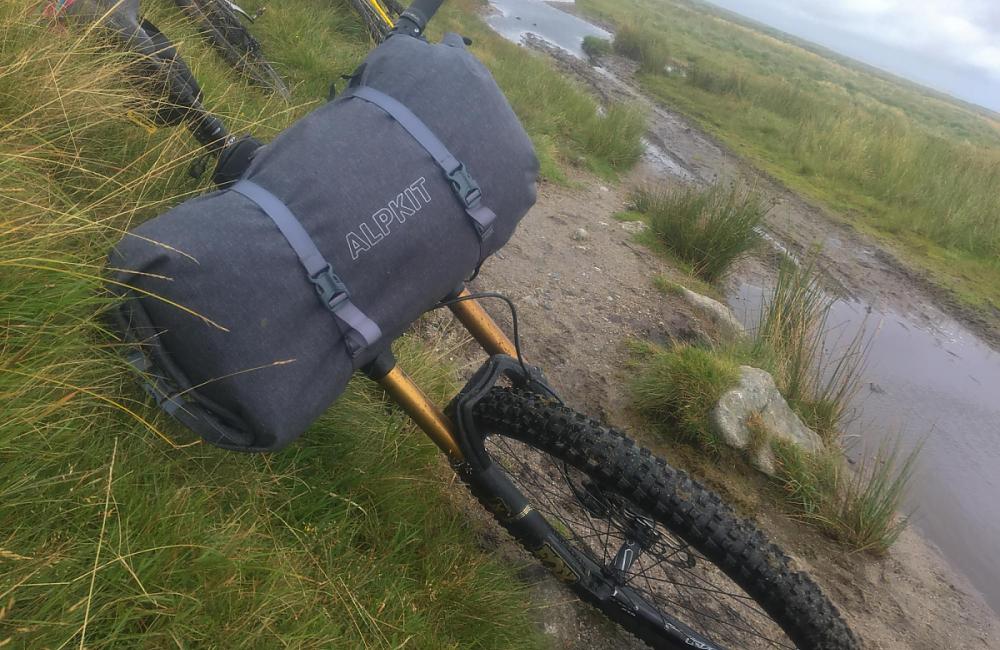 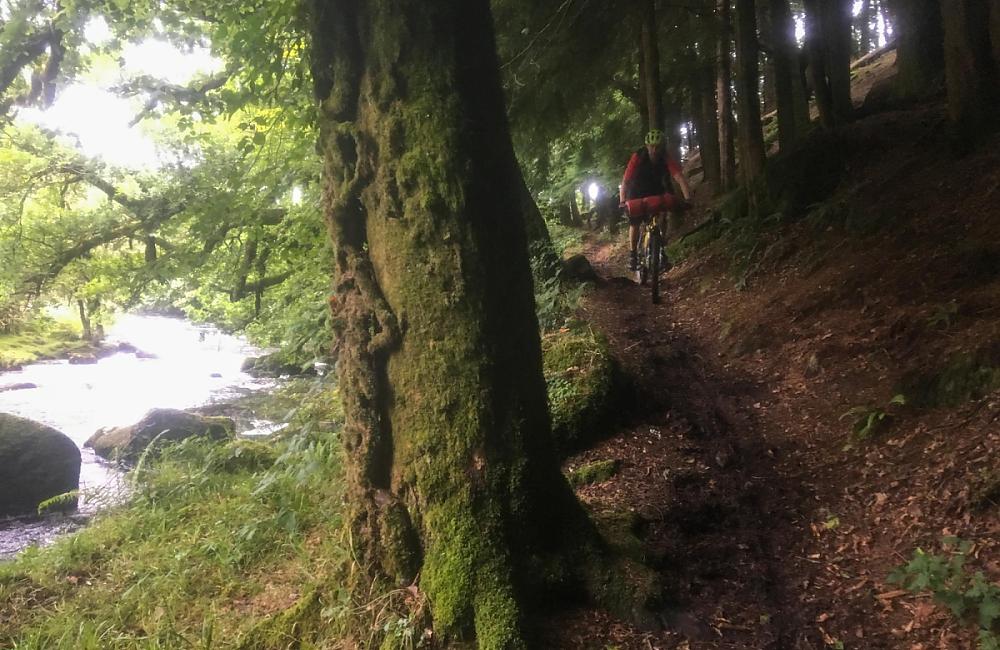 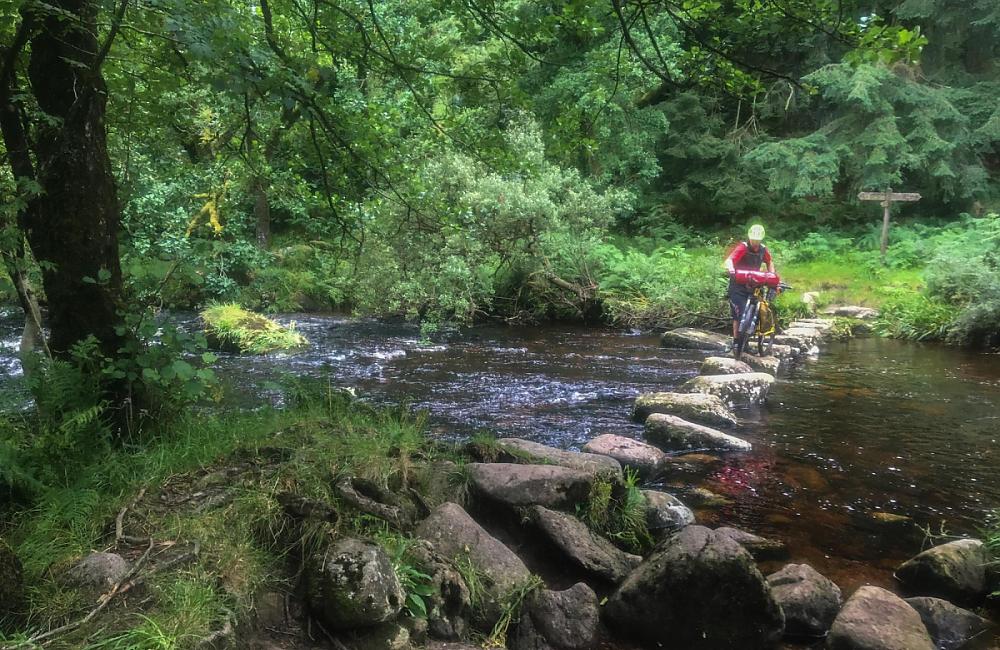 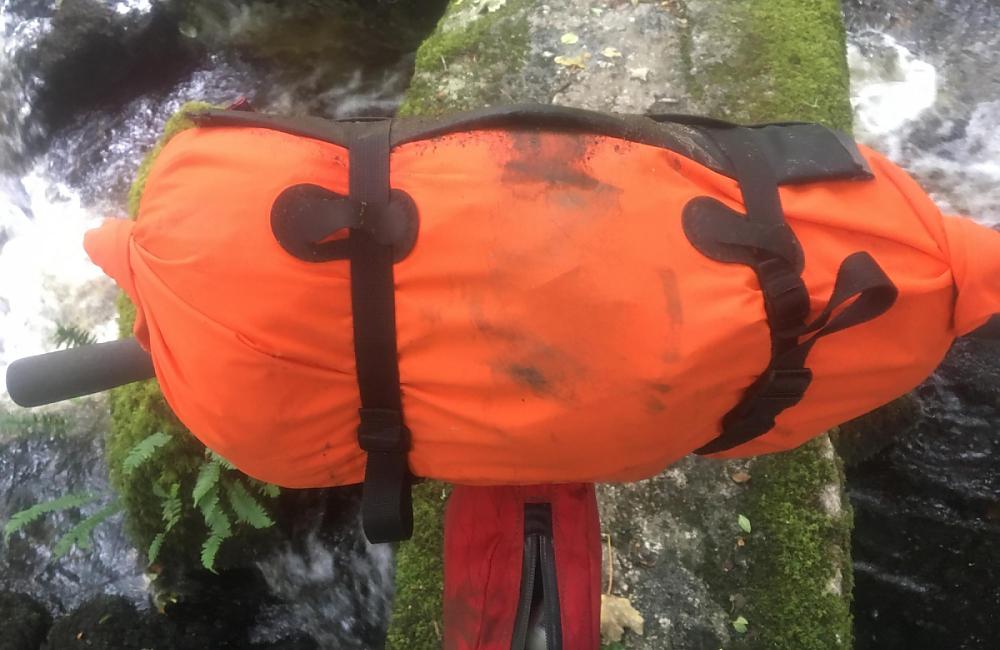 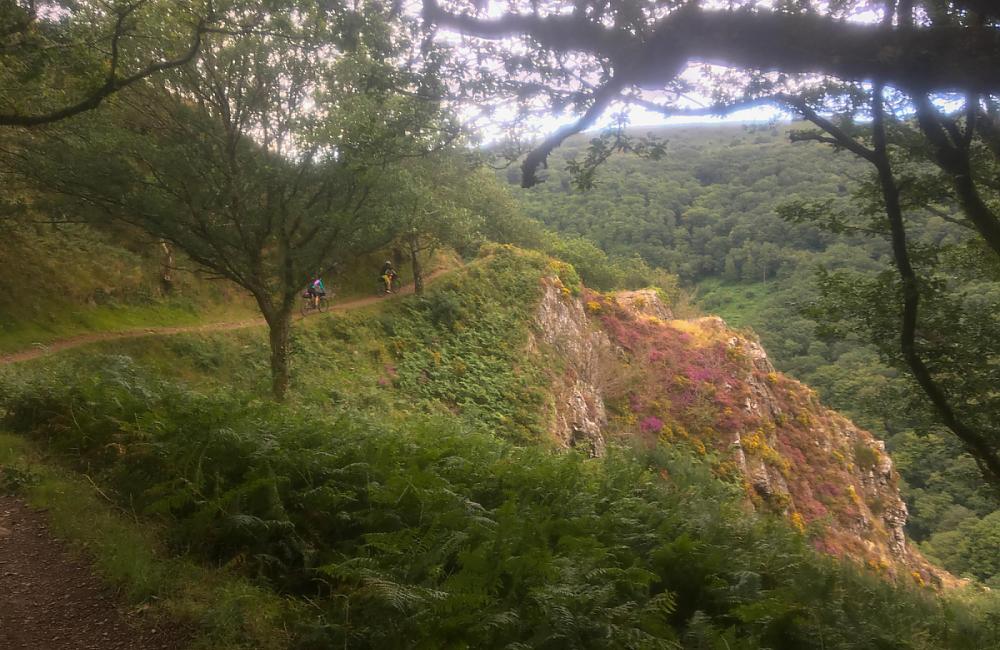 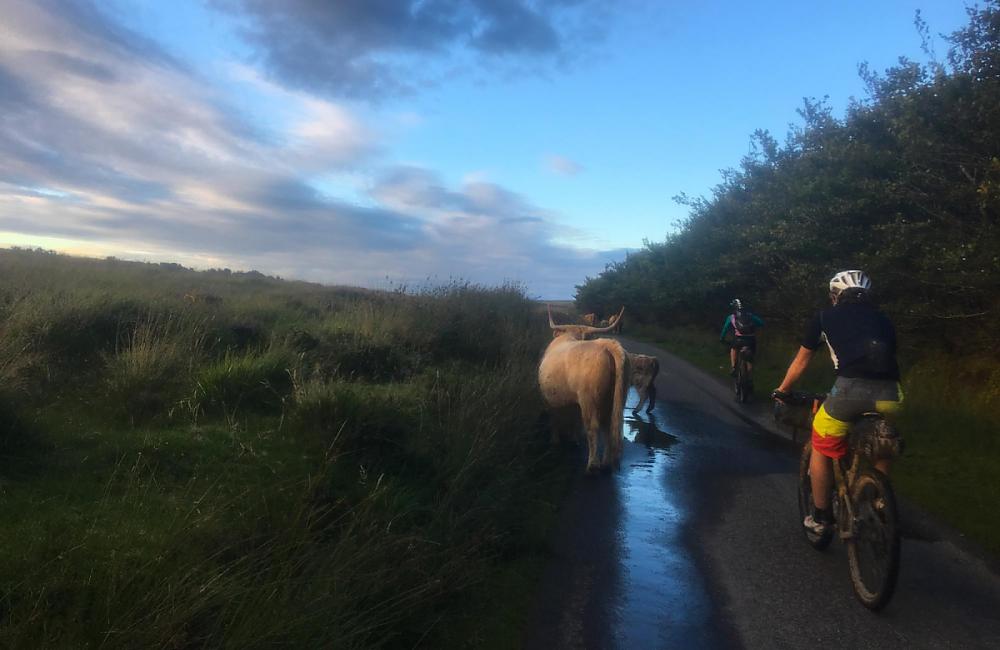 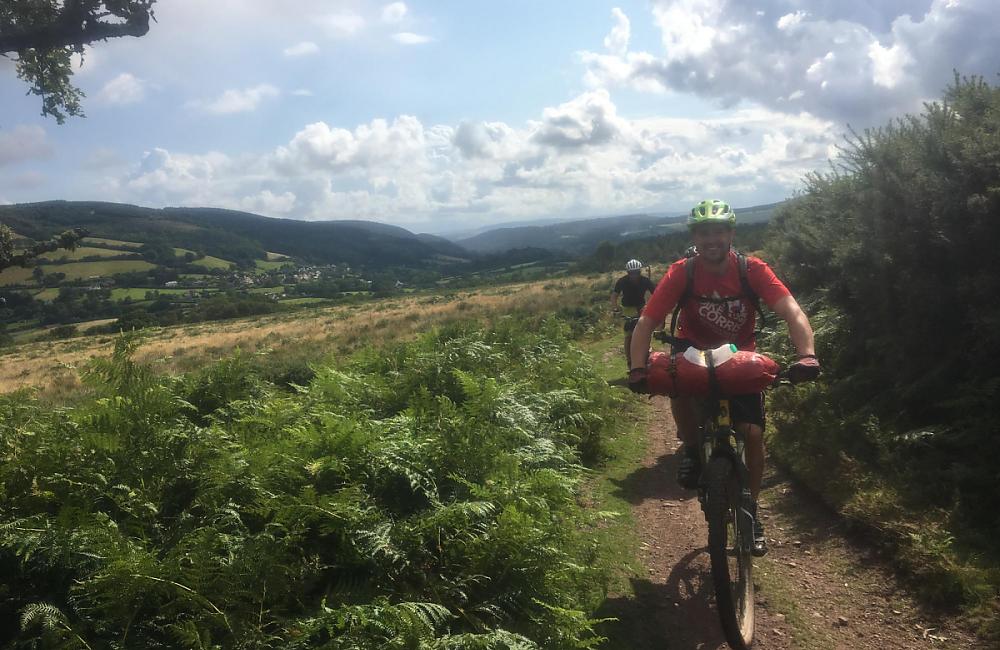 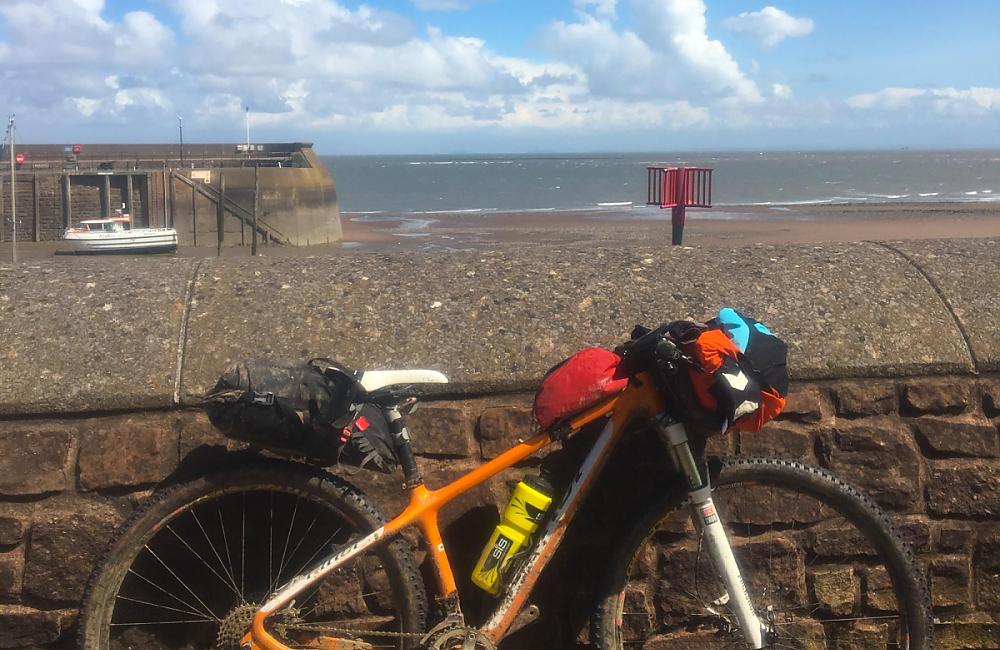 Route: From Plymouth to Minehead via Dartmoor and Exmoor National Parks

Conditions: It had rained a lot (before and during!), but the bridleways held up well with only a few splashy puddles. There was the odd field crossing that looked more like bog, however.

Accommodation: There are a few pubs and B&Bs along the way that would take a last minute drop in, however, we slept in tents on the moors, as wild-camping is easy on non-private land like National Parks

Equipment: I used my Niner Air 9 Carbon 29er hardtail, as it takes the buzz out of rumbling, rocky bridal ways.

Maps/guides: I used my Garmin Edge 800 with off-road maps and a GPX file downloaded from the above website, with an OS map for back-up. The route is obvious enough to use 'breadcrumbs' on a low-grade Garmin without maps downloaded.

I’m glad I had: Pubs to get proper cooked meals in the evening.

We parked up in Minehead and had two of us drive to Plymouth to start the route. The other two then drove us back to the cars in Plymouth to finish. The alternative is a bus to Taunton and then a train to Plymouth, but there was no guarantee the bus would take our bikes.

Baggage check: bikepacking bags or panniers? View
Cycling UK continues to support the UK to cycle
This remains true during this difficult period with the ongoing threat of coronavirus Covid-19
Read our latest advice on cycling
Join Cycling UK to help us change lives and communities through cycling
Membership gives you peace of mind insurance, discounts in cycle shops, rides & routes
Join now