The effects of Long Covid on cycling

The effects of Long Covid on cycling

Is it safe to cycle while recovering from Covid? What about Long Covid? Cycling UK's Jennifer Young spoke to three members about their experiences and asked a cycling GP for some tips on how cyclists can get back in the saddle safely after a bout of Covid

Although the UK remains in the grip of the coronavirus outbreak, the introduction of a vaccination programme along with the ending of most restrictions, means that many people are keen to get back to a normal level of activity, including cycling.

Most people who become infected can expect to make a full recovery in a few days or weeks but for some, the symptoms can last far longer, known as post-Covid 19 syndrome or Long Covid. Much is uncertain about Long Covid, but it’s known to cause lingering fatigue in previously fit and active people. So what role, if any, can cycling play in recovery? Three cyclists and members who have had the condition share their stories and tips on how to get back into the saddle safely.

Neil Berry, 49, from Sheffield was diagnosed with Long Covid in August 2020 after feeling unusually fatigued when cycling. Over the next few months his symptoms got worse: frequent breathlessness, dizzy spells, brain fog and fatigue, especially when he exerted himself. His gradual recovery did not begin until early 2021, when he was advised to make some lifestyle changes, including taking daily cold showers.

Neil found that cycling was not helpful while he was recovering.

“During the autumn I tried to push myself to get back in the saddle but even just trying 10 minutes or so made me feel rubbish while I was doing it, and then I suffered a general downturn in the coming day or two. I had to stop cycling completely for quite a few months.”

Having previously cycled regularly for both commuting and pleasure, this enforced rest was difficult for Neil.

“I got to the point where I realised I had to accept I couldn’t do anything at all. That was such a blow and left me feeling very down and pretty hopeless for quite a long time.”

Things picked up for Neil early last summer, when he was able to supplement short walks with short rides, slowly increasing the distance.

“By early June I had my first ride with a couple of other friends, 30km one sunny evening, which was a joy. I managed to progress to a week’s group cycling in Dorset, then join the Jo Cox Way ride from Batley to London in July.”

Perhaps surprisingly, Neil is able to find the positive in his experience.

“When getting back on the bike finally came, after so many months, it felt like the very first time all over again, and I have appreciated more than ever the banter and the simple joy that comes from riding with others.” 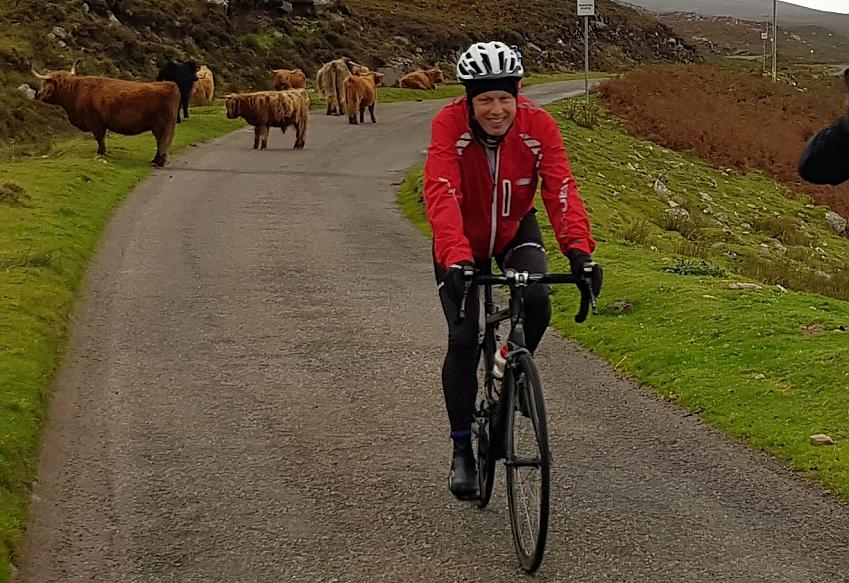 Jim Densham, also 49, was also unable to cycle due to Long Covid. Jim is from Glasgow and works as Cycling UK’s campaigns and policy manager in Scotland. Having previously experienced Chronic Fatigue Syndrome, which has similar symptoms to Long Covid, Jim found that the two conditions were actually very different when it came to the effect of exercise.

“I caught coronavirus in March 2020. After initially recovering I made the mistake of doing too much followed by periods of overwhelming fatigue, brain-fog, dizziness, and other odd symptoms. I found that the graded exercise which had helped with CFS didn’t work with Long Covid.”

At one point Jim, previously a keen cyclist and runner, found it exhausting to climb the stairs or sit up straight. He realised that he’d have to stop running and cycling, which he did for eight months. When he was ready to resume activities, he found it important to take things slowly and listen to his body.

“Like many other sufferers of Long Covid I found that pacing myself was important – not following any activity programme but instead being mindful of my energy levels and really listening to my body and its response to any small amount of exercise. Doing the same amount of exercise as the day before, like a walk around the block, is more important than trying to do a bit more each day.”

He said: “I advise anyone with Long Covid to treat it differently from any other illness you have had in the past. Allow yourself to fully recover before trying cycling for fitness.”

Rona Wightman, 59, from St Albans had a mild bout of coronavirus in April 2020 which left her feeling fatigued and mentally struggling to focus.

“I felt miserable, with some painful breathing, but I recovered. However, weeks passed with no change.”

A Cycling UK women’s ride leader in South Hertfordshire, Rona did not recover enough to lead any rides for some time, in fact it would be over a year before she felt well enough to do so.

“I felt really tired and weak and it knocked my confidence to go out cycling. Pre-coronavirus I was doing lots of cycling, using my bike for transport too. After my recovery from coronavirus I could only manage doing 5-6 miles.”

Having previously suffered from glandular fever, Rona had experience of managing exercise in recovery so was never tempted to do too much. She found that gentle cycling helped her recovery, along with support from her cycling friends and group members.

“Cycling helped my recovery by getting me out in nature. Once I was out riding I felt so much better. I would stop for a breather in woodland to do some forest bathing, pausing to take it all in. It made me feel more confident to cycle with other people too. I kept in touch with the group while I wasn’t cycling and got nice messages back. It was great when I managed to lead a ride again. Seeing all the happy faces is wonderful, so it’s really nice to have that happening again.”

Tips on restarting cycling after coronavirus

Wait a week after symptoms end before starting any activity. Only progress from one stage to another if you feel well enough: difficulty getting your breath back, muscle pains, feeling faint or profound fatigue indicate that you are overdoing it.

Week 2: start low intensity activity like gentle cycling indoors or on the flat

Week 4: progress to harder cycling sessions with a rest day after every two days of riding and do not ride if fatigued

Week 5: return to normal cycling level (provided you are not more fatigued or need longer recovery time than usual)

Dr Kate Brodie is a retired GP and cyclist in Devon.
For more advice, don’t miss the next edition of Cycle magazine.

How to: Organise a safe group ride during the coronavirus pandemic View