As a vocal minority continue to protest against the introduction of new measures to encourage walking and cycling, Cycling UK has produced a report for decision makers, urging bravery in planning local transport strategy.

If you believe the headlines, you’d be forgiven for thinking the country is in the grip of widespread opposition to the active travel funding measures councils have introduced in the wake of the coronavirus pandemic.

As a result, local authorities in many of our towns and cities, have felt pressured into removing schemes such as cycle lanes and low traffic neighbourhoods, without allowing any time for people to adapt and change their travel behaviour.

The truth, which the press has not widely reported, is that the public is largely in support of doing more to encourage walking and cycling, including building more cycle lanes and LTNs. 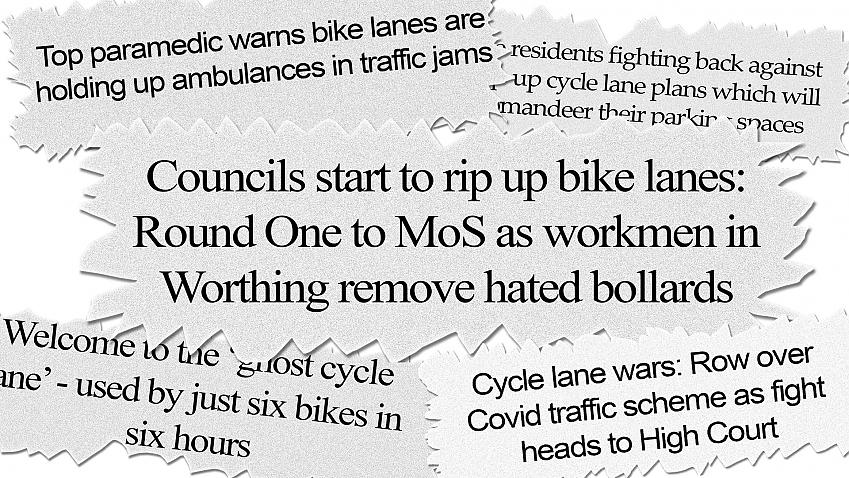 The report from Cycling UK sets out five reasons to be bold in planning, and why active travel needs to be at the heart of every local transport strategy.

Five reasons to be bold

A number of national attitudinal polls carried out through 2020 have proven that the majority of the public is in favour of more separated cycle lanes.

For example, in November, YouGov carried out a survey on behalf of Cycling UK. We asked: To what extent, if at all, do you agree or disagree with the following statement? ‘We should make it easier for people to cycle by building more separated cycle lanes'. In a sample of more than 2,000 people of all backgrounds from across the UK, 61% agreed. Only 19% disagreed. 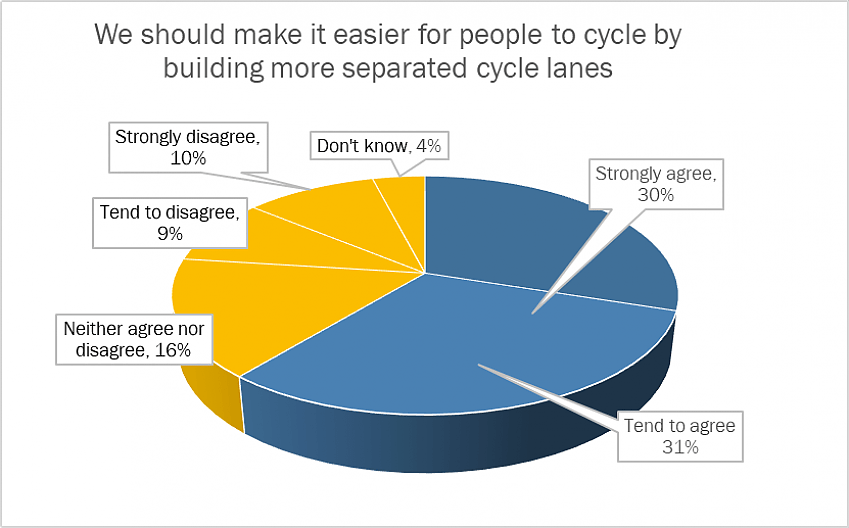 We asked the same survey group how far they supported the active travel funding schemes as a means of preventing traffic congestion as people avoided public transport due to fear of catching the virus. More than half of those surveyed (56%) said they were in support. 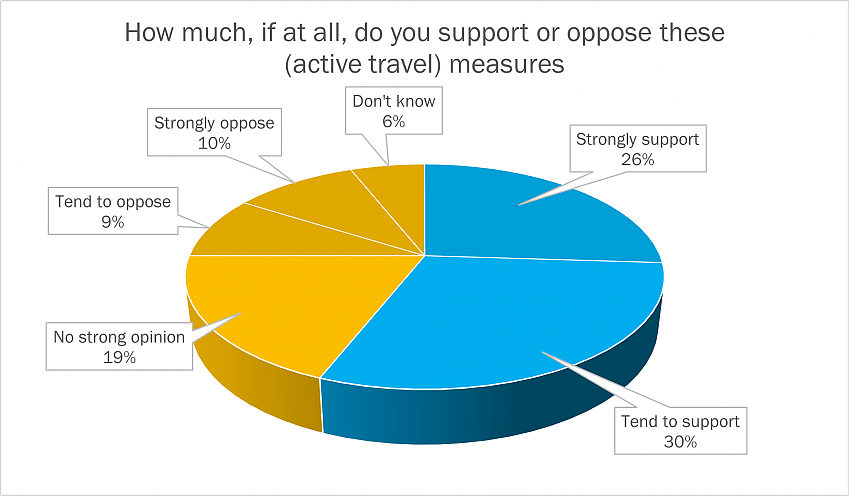 In May 2020, YouGov conducted a travel survey of 1679 adults in Great Britain on behalf of Greenpeace which showed 57% in support of increased government funding for cycling and walking.

A total of 58% said they were in support of cycle lanes on all main roads in urban areas. 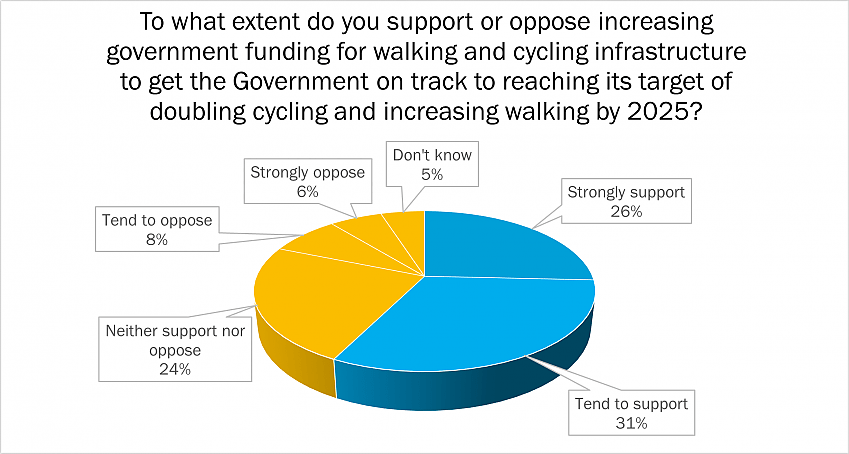 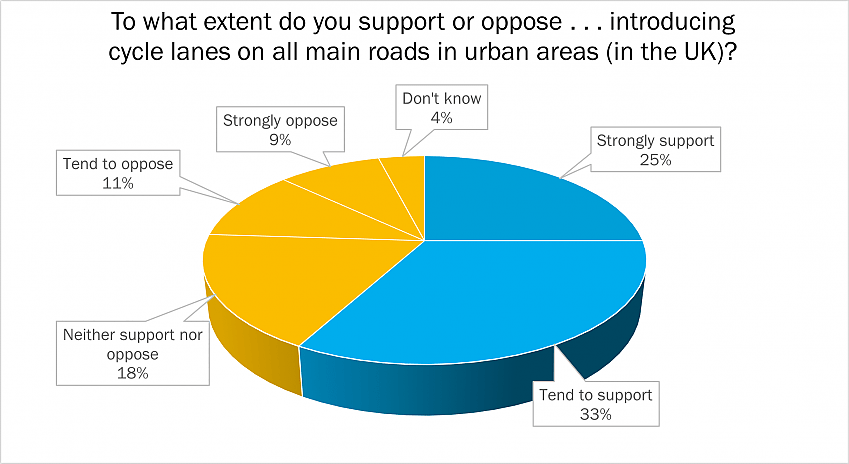 In July, #BikeisBest, a partnership of leading cycling brands, retailers and organisations which aims to encourage more to cycle, ran a public survey with YouGov on attitudes to the emergency active travel schemes.

2. People overestimate the public’s opposition to the schemes

Cycling UK’s ‘Cycle Lanes’ survey in November also revealed how people tended to over-estimate others’ opposition to active travel schemes by as much as 50%.

This may be explained by the high number of negative headlines about newly installed cycle lanes. Although only 19% of people said they were opposed to new active travel measures, 29% said they thought the public was opposed to them.

This appears to be the effect of a social psychological phenomenon in which people privately disagree with an idea but go along with it because they wrongly assume they are in a minority and that most other people support the idea.

It was highlighted by the #BikeisBest research in the summer, where its survey showed that for every 3.26 people who supported the view that ‘Britain would be better if more people cycled’, one person opposed the view.

But when asked what they thought the opinion of their friend or the general public would be, many respondents drastically overestimated the negativity towards cycling. 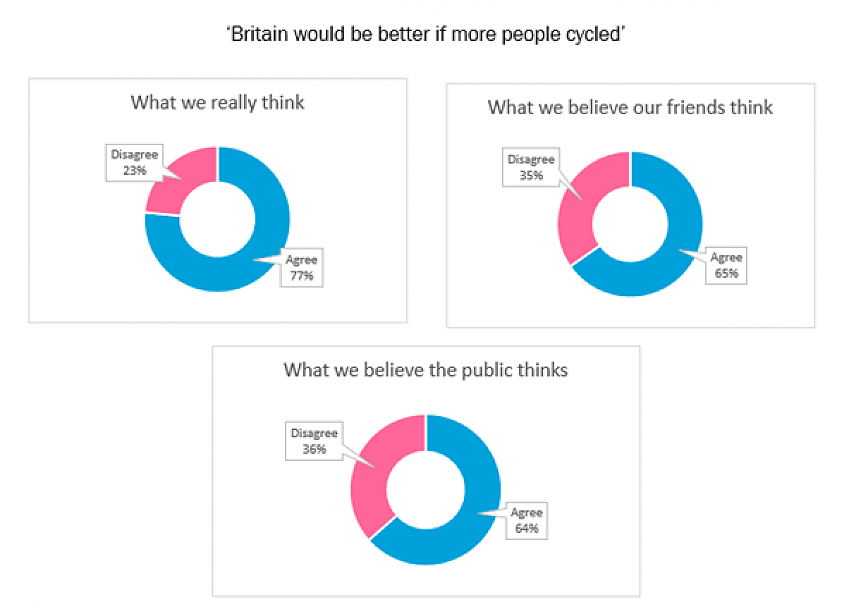 But in fact, people who travel actively tend to make more trips to the high street, with evidence suggesting that cyclists spend more in local shops than the users of most other modes of transport.

That’s why improving town centres and high streets for pedestrians and cyclists can increase retail sales by up to 30%.

Acorn Road in Jesmond, Newcastle, is a great example of scepticism and concern about loss of trade, followed by a business boom once measures to enable more active travel were introduced.

4. Build them and people will use them

It’s natural to fear that after installing new cycle lanes and infrastructure, no one will use them.

Our research shows many more people would cycle, especially for short journeys, if safe separated cycle lanes were in place.

Currently, only 2% of all journeys in the UK are made by bike, but that could be significantly increased with the right infrastructure in place.

Our streets are already congested, our air polluted by emissions, the NHS struggling to cope with an obesity crisis and climate change threatening our entire planet.

Cycling isn’t the solution to all these problems but it can play a significant part – with the right infrastructure to encourage more people out on their bikes.

100 miles of pop-up cycle lanes could enable millions to cycle safely post-lockdown View
Cycling UK continues to support the UK to cycle
This remains true during this difficult period with the ongoing threat of coronavirus Covid-19
Read our latest advice on cycling
Join Cycling UK to help us change lives and communities through cycling
Membership gives you peace of mind insurance, discounts in cycle shops, rides & routes
Join now