Cycling newbie Frankie’s on a 3,000km mission round the UK

Cycling newbie Frankie’s on a 3,000km mission round the UK

Frankie Dewar is nine weeks into a 3,000km cycle ride around the UK, interviewing women about adventure and the great outdoors – and she only started cycling six months ago

Like many, Frankie Dewar learned to cycle as a child, but didn’t continue into adulthood. In her early 20s, she considered it as a practical way to get around, but it took a long time to take that step. “I didn’t know where to start,” she says, “it’s hard to start something when you haven’t grown up with it around you.”

Frankie’s already pretty adventurous, and fitting cycling around climbing, camping and wild swimming was tricky. It took a nationwide lockdown to bring these other pursuits to a halt, giving her the space to finally start. “I wanted to stay fit, and keep adventuring safely,” she says.

So she and her girlfriend Frit headed to their local second-hand bike dealer, and came away with their new steeds. Frankie got a Giant Boulder 500, not yet knowing the sort of adventure it would take her on. 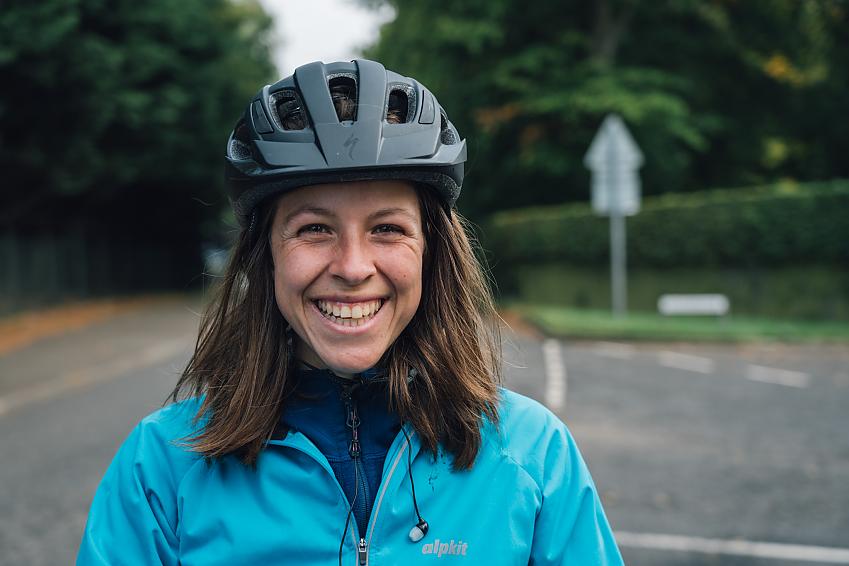 “It was really encouraging to have someone else with me,” she says, “and great to start cycling together.” Frankie and Frit started with the short distance to the seafront, before riding 13km to a neighbouring town. She remembers not being able to indicate for fear of letting go of the handlebars.

How do you go from this to a 3,000km loop of the country four months later? “At the start of lockdown we cycled once a week, building up the distance until we could do 90km, albeit very slowly.”

Cycling became a new outlet during a period of widespread fear and confusion. “Lockdown really shook me,” Frankie admits. “We live in a van and had to borrow a house. The help and generosity of other people made me question some of my choices, and wonder whether prioritising adventure was selfish.”

She began to look outward, as many of us did. “I wished I had someone else’s journey to follow, to look up to, instead of trying to carve my own path. I knew the stories were out there.” Then, the idea for an adventure was born. 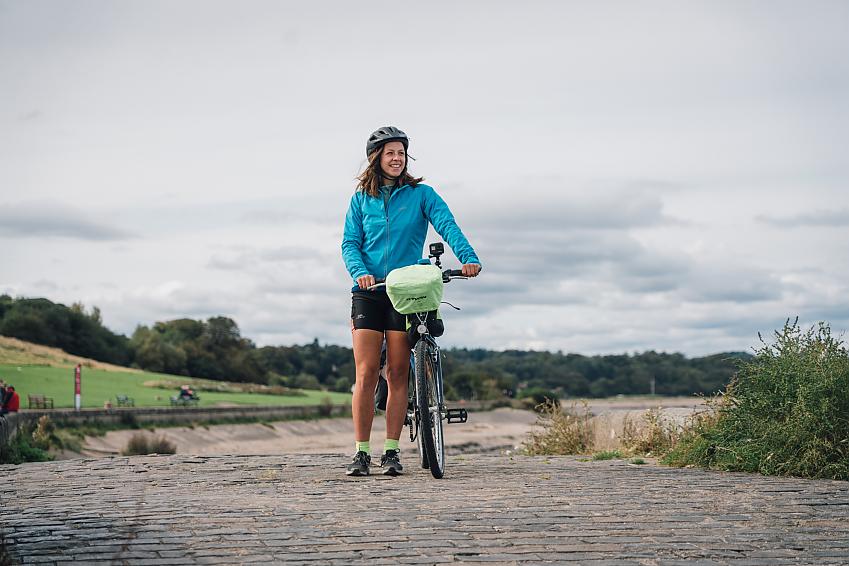 Frankie decided to use her newfound love of cycling to find those stories, and to share them. She posted in the Adventure Queens Facebook group, seeking potential interviewees, and received more than 200 invitations. After pinning all the locations to a map of the UK, the 3,000km loop practically created itself.

With three free months ahead of her, she would cycle alone, mostly self-supported, while Frit would meet her every couple of weeks for a bit of respite and a van to sleep in.

With only two weeks between finishing work and starting her journey, she finalised the route, arranged the meet-ups, and ordered the kit she needed.

“The week before leaving, I knew there was no point trying to push my fitness, so I just ate well, rested and focused on gentle exercise. In fact it was all so last minute that I didn’t test my kit before I left, and I had to get used to cycling with panniers along the way.” 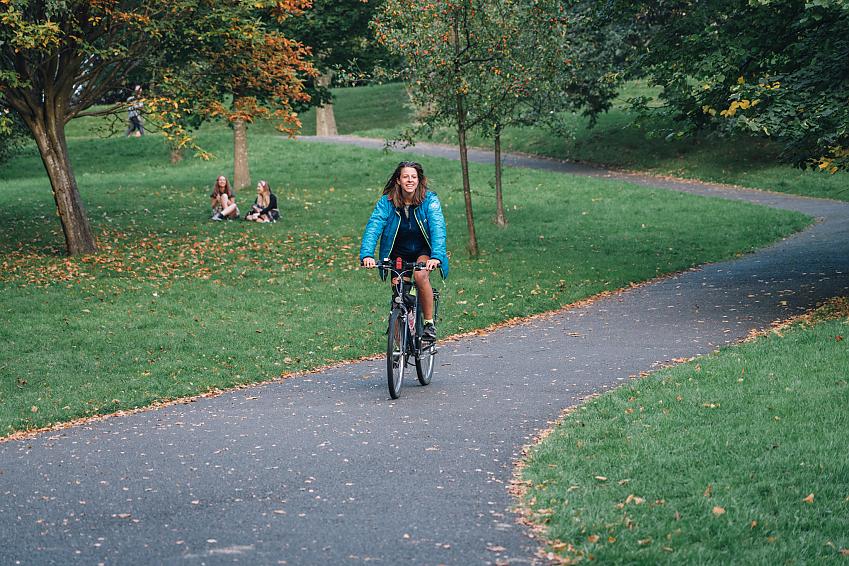 Prepared or not, this journey is proving to be liberating for Frankie. “Cycling is really freeing,” she says. “There’s something about it that makes me feel really empowered.”

Anyone who rides a bike will be familiar with this sense of freedom that comes with it. “There’s a period of reflection that time on the bike gives you,” Frankie continues. “It enables you to work through your feelings and priorities. This trip has definitely taught me the power of just letting go.”

Frankie exudes a refreshing sense of wonder. While travel has been restricted, she’s found a deep sense of gratitude for the landscape around her, and her enthusiasm for exploring her own country on two wheels is contagious.

“There is so much joy to be found on the bike,” she explains. “I’ve cycled through some of the most incredible landscapes the UK has to offer, and visited the most amazing people. It’s hard to be sad with the sun on your face, the wind rushing past and the ability to take yourself anywhere. It’s complete freedom.”

Of course, something like this comes with its challenges, and Frankie’s trip did get off to a rocky start. “On day one, it felt like I’d failed already,” she reflects. “The [seat clamp] broke, and no shops were open at 6pm on a Saturday so I had no choice but to put the bike on the van and call it a day. I was heartbroken.”

It’s hard to be sad with the sun on your face, the wind rushing past and the ability to take yourself anywhere. It’s complete freedom

Other difficult days followed: “There was one day that was hard physically and mentally. I had just started my period and my body felt really heavy. That day I hated cycling and everything about it, and despite being in the stunning Llanthony valley, I didn’t even really care about the view.

“But I kept pedalling, had a little cry, and tried to list things I was grateful for. It was a tough day but I’m all the tougher for it now.”

So nine weeks in, how does she keep pedalling when morale is low? “I just take one day at a time,” she explains. “I don’t think about the whole distance, just what I have left to do. I think about whatever is waiting for me, whether it’s a hot meal, a tent, a warm van or a hot shower.

“The harder it gets, the smaller the chunks I break it down to. If I get through the next 5km I’ll have a snack; 20km and I’ll stop for lunch. On big hills I remind myself that pedalling slowly is faster than pushing, and pushing is faster than standing still.”

For Frankie, it’s not just about the cycling, but the people she’s meeting along the way. So far she’s had fascinating conversations with women and non-binary folk aged between 30 and 70, from all walks of life, and for whom the outdoors and adventure are still prominent.

“Everyone has a really different life experience and I love that,” she says. “There are folk who work outdoors, those who save up for big trips, and those who try and get out locally every day. I want to show that there’s no set narrative and no single story.” 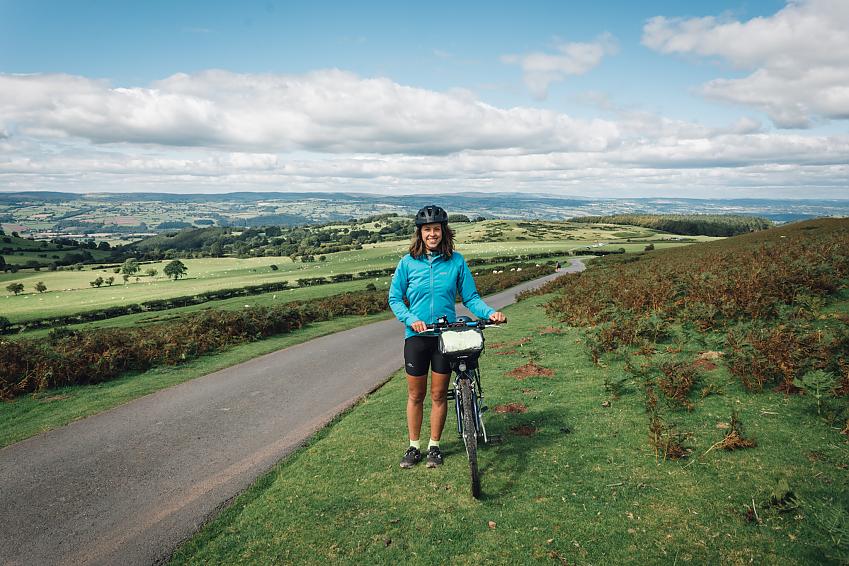 Age is a topic that comes up naturally in this setting, and it isn’t the limiting factor you might expect. The women Frankie meets often struggle to offer advice to their younger selves, because as far as they’re concerned, they’re still learning.

Frankie explains that with society’s emphasis on the youngest and oldest people to accomplish things, there’s an entire generation lost in between. Perhaps that’s why her request for interviews was so successful: she spoke directly to them.

This led to much wider conversations around representation in outdoor media. Very few of Frankie’s interviewees felt represented, whether it was around age, body type, ethnicity or faith. Conversations touched on accessibility for those who aren’t able bodied, and overcoming illness to access the outdoors. 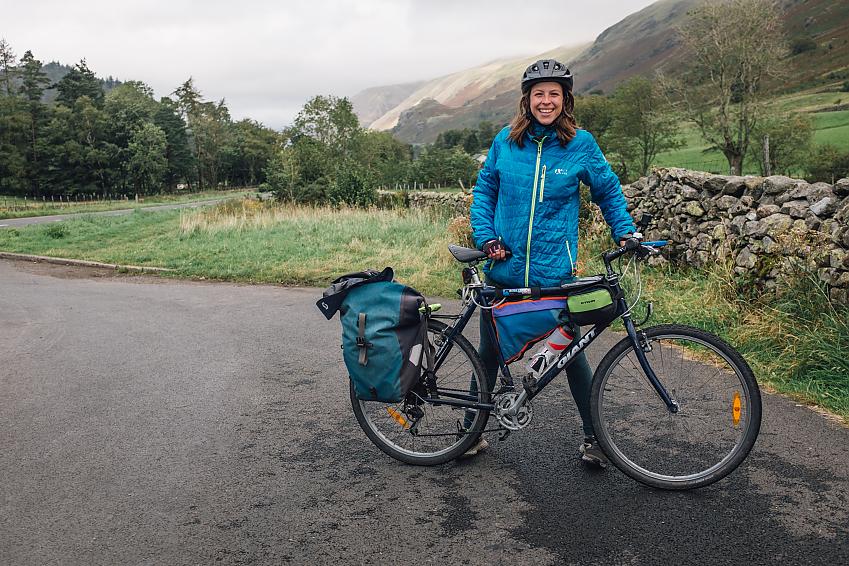 “Different people are held back and motivated by different things.” Frankie asks all of her interviewees to name one thing they know about themselves now that they wish they had known earlier. The two most common responses are: ‘that I am enough,’ and ‘I am more resilient than I thought I was’.

“I think that’s so powerful,” she reflects. “You never know how resilient you are until you get through something tough. Knowing that other people have got through without that knowledge maybe offers a glimmer of hope to anyone going through the same.” 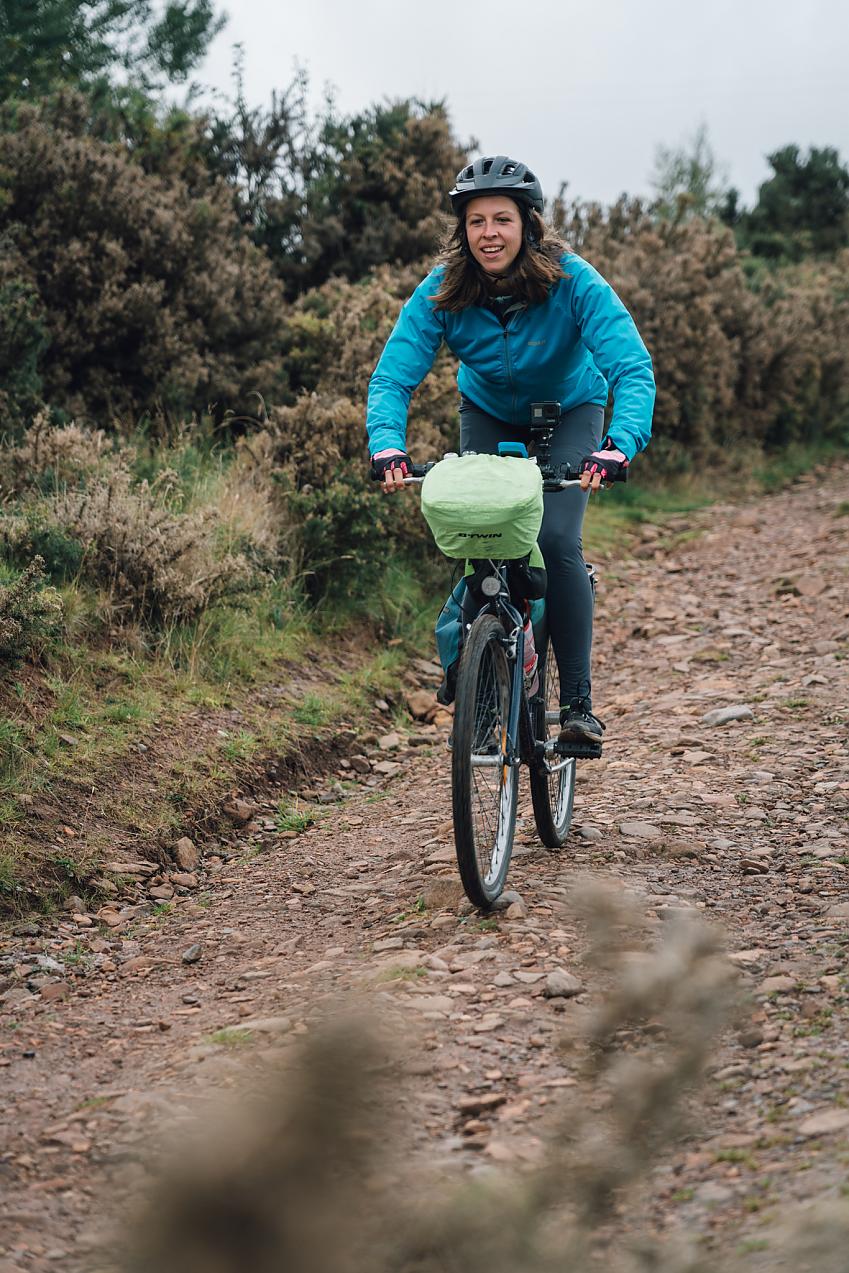 Frankie is now on the second half of her journey, making her way back south through York, Sheffield, Cambridge and Brighton, and plans to finish in Shoreham in October. She has big plans for the interviews and stories she’s collected along the way.

“I would love to make the content as accessible as possible,” she says. Depending on audio quality (recording outside isn’t always easy), Frankie hopes to put together a series of podcast episodes to share her interviews. She may write a series of blog posts as well, while she’s hoping to exhibit the portraits she’s taken of all her interviewees using her grandmother’s manual camera.

Meanwhile Frit, who is a filmmaker, has been following Frankie throughout her journey to document it. She has plans to create a short film about the ride. “Really, the trip is just the start of it,” says Frankie. “When I get back, there is going to be a lot of work to do!”

Follow Frankie’s journey, and if she’s passing through your hometown, feel free to give her a wave or even keep her company for a segment of the ride.

Frankie Dewar completes her 3,000km loop around the UK in 71 days

Following on from our interview with Frankie, she’s now completed her amazing journey around the UK in two and a half months, interviewing countless women along the way about adventure and the great outdoors. Here’s a brief update from her, now it’s over.

“Having started the trip in a rain storm, it was really apt that on my final day it was tipping it down, with huge gusts of wind coming in from the sea and making our bikes feel like they were sliding sideways across the cycle path. Frit joined me for the final cycle, and on the last day I had the short 13km ride to complete from Brighton to Shoreham.

“It felt really strange to finish! I’m hugely grateful to have had this opportunity, really thankful to all my interviewees and everyone who helped make the trip happen. I’m over the moon that I’ve been able to complete this journey that seemed so huge at the start, but also now I’ve finished I’m a little sad that it’s over, when the journey is so much fun you never really want to arrive at the destination.”

Her work’s certainly not over, though, as she’s got plenty of film footage, photos and interviews to sort through. She plans to launch some projects in the spring, so watch this space! 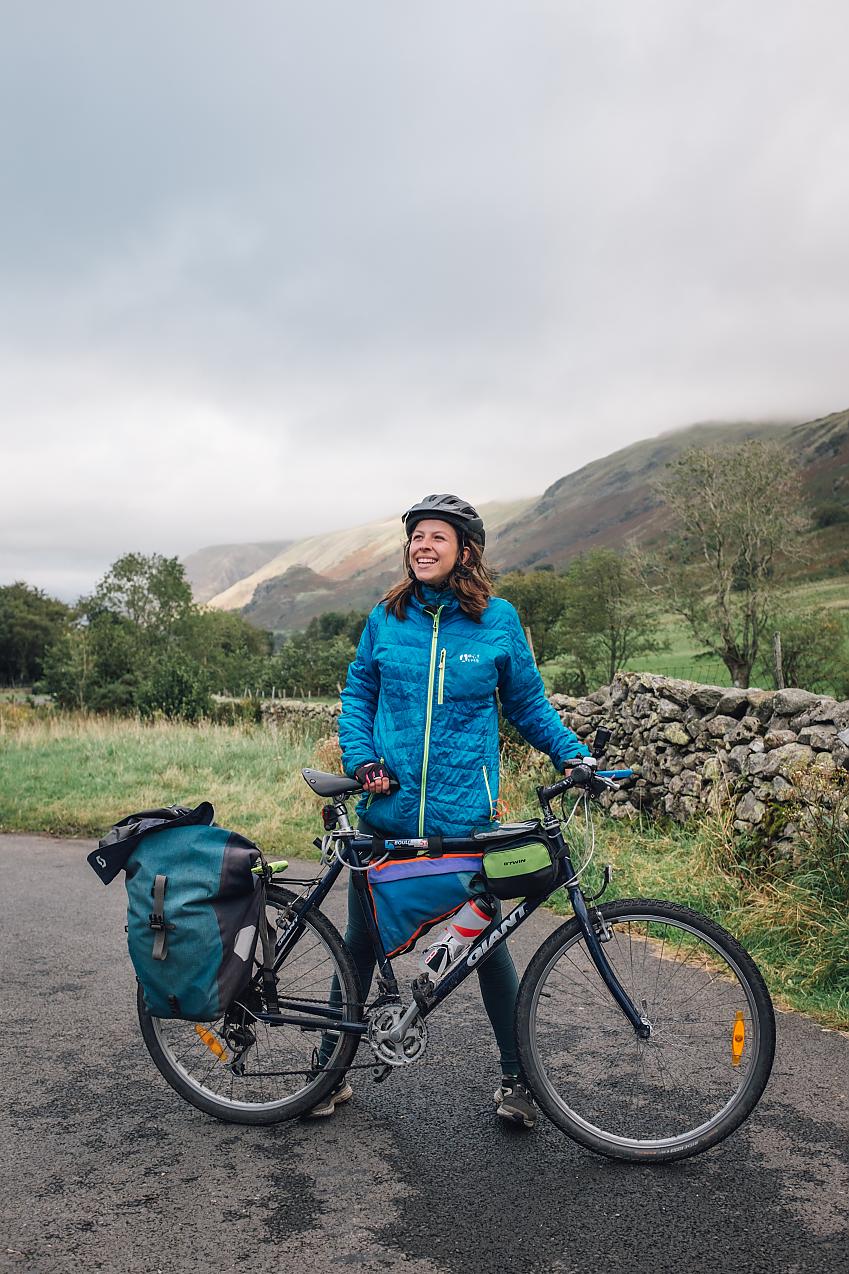 Women’s cycling kit - what should I wear while out on my bike? View