Handcycling in the Dales

Handcycling in the Dales

The Grand Départ of the 2014 Tour de France in Yorkshire was a spectacular success, but as a handcyclist I felt there was something missing: a legacy for handcyclists. When the Tour came to London in 2007, there was an official race on the Mall that drew handcyclists from all over the world. So this year, some friends and I decided to create an event, the Dales 2-Day, to celebrate the Tour and also to remember a handcycling friend Gary Jackson, whom we’d said farewell to in 2014. Gary was one of the first of us to ride the coast to coast. (Cycle’s June-July 2007 issue carried an account.)

We would ride some of the Tour de France route, including Le Côte de Buttertubs, and take in the Tan Hill Inn, the highest pub in Britain, to provide a link to Gary’s coast-to-coast ride. Gary’s widow, Maureen, joined us for the weekend and planned to meet up with us at various locations in her car.

We based ourselves at the Dales Bike Centre in Fremington. Owners Stu and Bren agreed to host us and lay on a pasta party on the Saturday evening. We publicised the event on the handcycle Facebook page, took out Cycling UK event organiser insurance, and wrote risk assessments. Seven handcyclists and five cyclists attended.

The Yorkshire Dales isn’t the easiest terrain on any cycle, but the handcyclists had a lot of experience: four had ridden the Fred Whitton Challenge; one had ridden LEJOG; three had done various coast to coasts; two had tackled classic Alpine climbs; two were regular racers; and all had completed too many sportives to mention. The common denominator among the cycles everyone brought was low gearing for the climbs!

Our arrival on Friday night was greeted with torrential rain. The few of our group who braved camping in Reeth rather than B&Bs were surprised when the owner of Orchard Park Caravan and Camping offered them the use of a static caravan for the weekend for the same price, on the basis that it was much too wet to camp. We felt sorry for several hundred Scouts camping in the field adjacent to the Dales Bike Centre. They must have had a damp night and a wet start to their walk.

Friday night’s torrential rain eased by morning. We decided to delay the start by half an hour to let the last of the light rain blow through. This was no hardship. All the necessary form-filling took place in The Dales Bike Centre café, accompanied by coffee and cake. 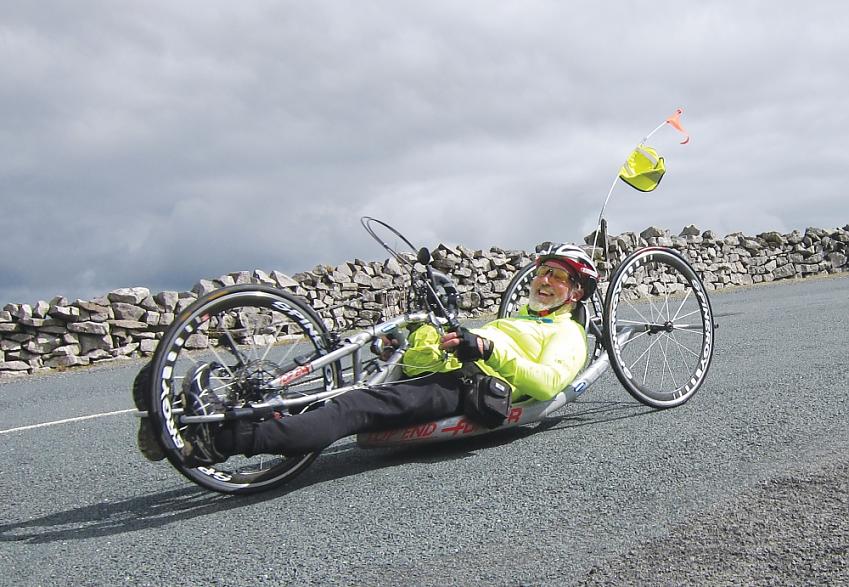 After a group photo, we set off in a peloton, passing quite a few of the Scouts equipped with compasses and maps. We were straight into the first climb at Grinton, up Whipperdale Hill and onto Grinton Moor. The beauty of such climbs in the Dales is that they lead to fantastic views. You don’t stop because you’re tired; you stop because you want to admire the landscape. The summit of this climb, leaving Swaledale and entering Wensleydale, gives a 360-degree panorama that stretches for miles, towards Sutton Bank in the east, Fremington Edge and Calver Hill in the north, Great Shunner Fell in the west, and Great Haw in the south.

We sped down the descent and cut across to Castle Bolton to see the eponymous castle. As if arranged for us, there were folk in period costume at the castle gates. We then followed the quieter north side of the River Ure rather than the Tour route’s A-road to Hawes. We saw lots of other cyclists, including several groups of women. All shouted encouragement.

After stopping for a quick snack and drink in Askrigg, we pressed on to Simonstone, probably now more famous for a Top Gear fracas than anything else. We joined the Tour route at the start of the climb up the Buttertubs. Everyone fell into their own rhythm, some riding together and chatting, some pressing on, some stopping to admire the view every so often. The descent is fantastic on a handbike, because you sit only inches from the road, amplifying the sense of speed.

The Tour route back along Swaledale to Fremington follows the river downhill so was an easy finish. We passed the Scouts returning from their day on the fells, and headed back to our various accommodations for a shower and change. We met back at the Dales Bike Centre for our pasta party, which was kindly sponsored by Cyclone Technologies.

Cyclone’s owner, Stuart Dunne, has been involved in disability sports for over 20 years and happens to live just across the road in Fremington. He joined us for the evening with his family, together with his sales manager. After the excellent pasta meal, we raised a toast to Gary and headed up the hill to sample the pubs of Reeth.

The descent is fantastic on a handbike, because you sit only inches from the road, amplifying the sense of speed."

The next morning was cloudy and blustery. After a quick coffee, we set off from the Dales Bike Centre and back through Swaledale, staying low and out of the prevailing wind. Leaving the Buttertubs on our left, we rode past Keld, then crossed the River Swale onto Stonesdale Lane, which is easy to spot as there are two tight hairpin bends that look impossibly steep.

As we climbed on up towards Tan Hill, we became increasingly exposed to the wind. The higher we got, the wetter it became. At 1,732ft we were finally at the Tan Hill Inn, where it would have been rude not to have a half in memory of Gary.

Access to the inn isn’t great, even less so on a handbike. While some hunkered down on the east side of the inn out of the wind, others exerted more effort to get onto the porch, which promptly seemed to become the busiest thoroughfare in Britain.

From Tan Hill, it was a blast along Arkengarthdale. This road undulates along the moor, but it is easy to carry your speed up the other side of the dips, especially with the strong tail wind that we were experiencing. As the road veers to the south east, so the wind became more of a crosswind, which made for some interesting twitches in the gusts, even for those without deep-rimmed carbon wheels.

All too soon, we were descending through Reeth to Fremington, packing bikes into cars and saying our goodbyes. The Yorkshire Dales offer fantastic routes for handcyclists, so long as you’ve got low gearing and good brakes. It’s easy to join route sections together to make longer ones or cut corners for shorter ones. We plan to run the event again, hopefully attracting a bigger and more diverse group: we were all over 40 and male.

This was first published in the October/November 2015 edition of Cycling UK's Cycle magazine.

Arranging an event for handcyclists is not too difficult.

Things to think about:

Conditions: Overcast and windy when we were there in May.

Maps/Guides: Downloaded from ridewithgps.com and printed off.

Next time I would… Make it 3 days

On my bike: JJ Chalmers View
Cycling UK continues to support the UK to cycle
This remains true during this difficult period with the ongoing threat of coronavirus Covid-19
Read our latest advice on cycling
Join Cycling UK to help us change lives and communities through cycling
Membership gives you peace of mind insurance, discounts in cycle shops, rides & routes
Join now