Shared use routes in Cambridge
By Chris Peck
Monday, 17 September 2012

A new guidance note from the Department for Transport on shared use routes for pedestrians and cyclists has been published. Cycling UK and other user groups had previously submitted comments. Although it improves the situation a little, major problems remain, particularly around ensuring route quality.

Last year the Department for Transport asked for advice from Cycling UK and other organisations on new guidance regarding shared use routes. An earlier draft of this document appeared in 2004, and in 2008 subsequent guidance set out the principles behind designing infrastructure for cyclists.

In response to the draft, Cycling UK outlined what we felt were the areas of chief concern, principally around the low standard of design which the guidance suggested was acceptable.

The chief change the guidance makes is advice to councils no longer to aim for segregation between cyclists and pedestrians, rather that unsegregated shared use may be preferable in some places.

Research conducted for the Department for Transport found that levels of satisfaction amongst both cyclists and pedestrians tended to be higher on unsegregated routes than narrow segregated ones, where pedestrians often stray into the cycle part of the route.

The main problem with current design of off-road routes is how they deal with junctions, where the majority of crashes occur.

In the Netherlands, where cycle paths are ubiquitous on major roads, drivers are accustomed to giving way to cyclists - priority being indicated by simple road markings. However, in the UK, priority over side-roads is far less common, partly because guidance has failed to explain why good quality cycle paths need to be continuous, and not give way at every side turning.

For instance, current regulations specify that in order to retain priority a cycle path must be carried across a road on a road hump. This greatly adds to the cost (and unpopularity - few motorists enjoy road humps) and has been seldom used.

The guidance, unchanged since the draft, suggests that priority cannot even be given over access to businesses, and laughably notes that "a good quality cycle riding surface past the access might be more useful than giving the cycle track priority." Cycling UK's comment was that a good riding surface should be a given, not an additional luxury worth trading off in exchange for a loss of priority.

A new approach to cycle tracks

However, one innovation introduced by the document that is likely to be of assistance is a description of the 'hybrid' cycle track, similar to that recently installed in Brighton, see below. 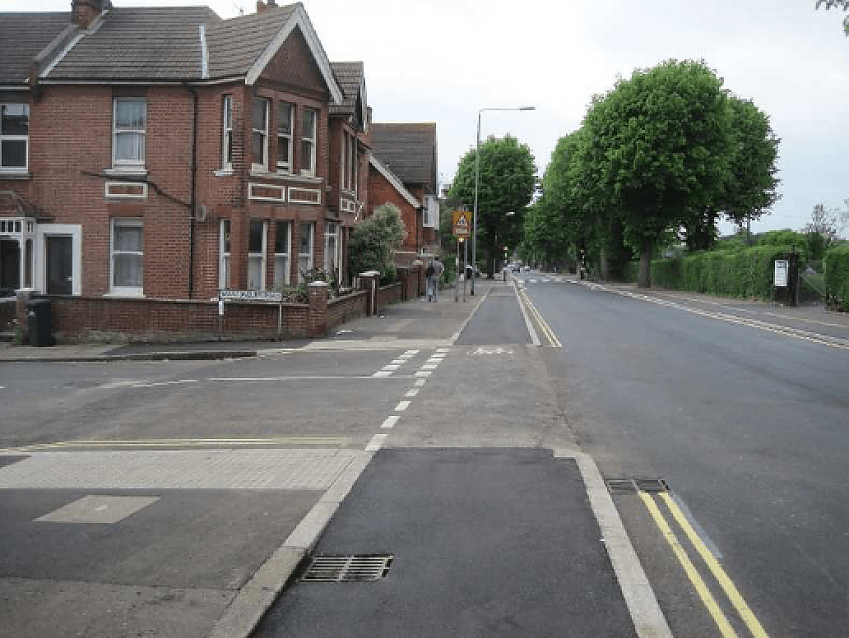 This approach, commonly used in Denmark, reallocates roadspace into a semi-segregated cycle lane alongside the main carriageway with limited differentiation between the two. Usually the cycle track is a little higher than the carriageway, but below the level of the footway.

By remaining ostensibly part of the main carriageway, priority can be provided over vehicles emerging from side roads - although in Brighton whether priority can be retained over those turning off the main road is less clear.

However, the hybrid cycle track isn't without its problems. By placing the cyclists right next to the carriageway conflicts may increase with bus passengers (as observed in Copenhagen) and drivers tempted to park beside - or on - the track. It is therefore perhaps more suitable to use hybrid cycle tracks along routes which are not bus corridors and where parking restrictions are in place.

Overall the guidance has improved a little since the draft version, but remains unlikely to lead to a massive improvement in the quality of design of cycle tracks.

A copy of the guidance can be downloaded below.

Shared use routes for pedestrians and cyclists - LTN 1/12

CTC's response to the initial draft