Balsall Heath CCC, Birmingham, is now over a year old and after an initial slow start is going from strength to strength.

After a launch event that took place in May 2017 at a nearby mosque, the club was inundated with inquiries from people wanting to join in. Membership jumped from sixty to 125 with a space of 12 months. They are and always have been very involved in their local community – their Saturday Ride Active Sessions are run at the mosque with British Cycling, and are very popular. They also frequently work with other clubs around Birmingham, including Gear Up Bike Shop, Ashiana Community Project and B10 Community Cycle Club.

Balsall Heath also very generously provide facilities and training for Cycling UK training sessions, and have been involved in Cycling UK's Big Bike Revival this year by hosting our 'knees up' launch event on the anniversary of their first ride! Balsall Heath are known to be accommodating and helpful to anyone who wants to cycle. In addition, they are proactive in their approach and inclusive in their outlook. Cycling UK are pleased to recognise Balsall Heath CCC in this year's Volunteers of the Year Awards. 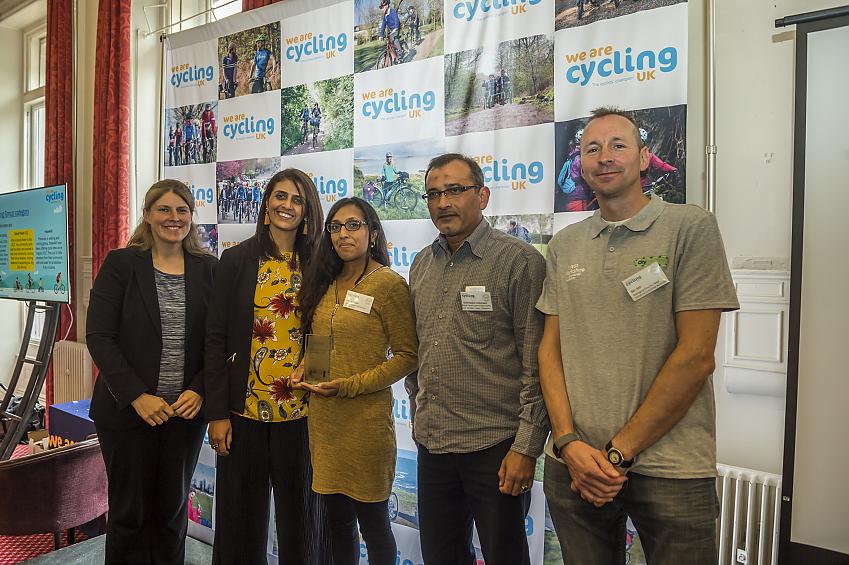 Tasleem Iqbal, the club’s secretary, said of the win: “We were shocked as it was a total surprise for us, but felt immensely proud for the entire club as all the volunteers have made this achievement possible.”

Alex Cuppleditch, Head of Volunteering at Cycling UK said: “The brilliant volunteers behind Balsall Heath Community Cycle Club are proactive and inclusive, helping anyone who is interested in getting on a bike. They have found a fantastic formula for success, and the club is a worthy winner of the ‘Best Cycling Group’ title.”

Cycling UK's Volunteer of the Year Awards are given annually to recognise and celebrate all the incredible work volunteers do in encouraging others to start cycling and keep cycling.

Awards, inspiration and birthday cake at The Big Bike Celebration View
Cycling UK continues to support the UK to cycle
This remains true during this difficult period with the ongoing threat of coronavirus Covid-19
Read our latest advice on cycling
Join Cycling UK to help us change lives and communities through cycling
Membership gives you peace of mind insurance, discounts in cycle shops, rides & routes
Join now