Over 49,000 miles of paths across England and Wales are at risk of being lost forever, unless we make an effort to put them on the map. Cycling UK campaigns officer Sophie Gordon explains how we can save them before they disappear.

Update February 2022: Defra is going to remove the 2026 deadline for adding historic rights of way to the map, following years of campaigning by outdoor access organisations. This reduces the risk of thousands of paths being lost imminently, but it is still important that we research lost ways and get them added to the map and protected for public use.

Whether you use them for riding, running or walking the dog, our public paths are a gateway to adventure – a way to take time out, connect with nature and explore new places. They bring to life our history and heritage. Your path could be an old Roman road or a way used by pilgrims to travel to church.

However, many of these routes that have been used for centuries aren’t officially recorded on the map, and if they aren’t added by the cut-off date of 2026, over 49,000 miles of paths could be lost forever.

Identifying and recording these lost ways is a huge task, but by combining efforts with individuals and groups all over the country, you can help make sure they are put on the map.

The clock is ticking

The Countryside and Rights of Way Act 2000 (CRoW Act) brought in several improvements to public access, like allowing open access on foot on some areas of land and promoting strategic planning of rights of way networks. It also introduced a cut-off date of January 2026 for any rights of way created before 1949 to be added to the definitive map (the legal record of public rights of way), so the public right to use them would be officially recognised. If these historic paths are not recorded, the legal right to use them will be extinguished in 2026.

Find out more about how we got to this point.

Many historic paths may be in frequent use by the public already, but as they are not recorded as rights of way, the landowner is able to close them off at any time. Others might be forgotten and overgrown, but could potentially be a useful route.

This is particularly significant for off-road cycling and horse riding due to the fragmented nature of the bridleway and byway network. There are many places where adding historic rights of way to the map could form a crucial link between existing rights of way.

There are other cases where rights of way were incorrectly recorded as footpaths but actually carry higher rights, for example where they were previously used as a road for horses and carriages. Making sure these are recorded correctly could open up more rights of way for cycling.

Adding rights of way to the map

Proving that a right of way exists involves gathering evidence from historic maps. Any route shown on old maps as a public road or bridle path that doesn’t appear on current Ordnance Survey maps could be a contender.

Ever spotted one of those odd bridleways that suddenly turn into a footpath at a parish boundary? Chances are the footpath was incorrectly recorded when the council first produced their definitive map, and actually carries higher rights.

The more evidence you can find to support your claim, the greater the chance of success. Once you’ve gathered all your evidence, you can put in an application to the local authority for a Definitive Map Modification Order (DMMO).

Then sit back and pat yourself on the back, but don’t hold your breath – councils have a large backlog of applications and some take years to go through.

Researching historic rights of way may seem like a bit of an undertaking, but the British Horse Society and Ramblers have produced some great information and online tools to help steer you through and make life easier.

Rather than reinventing the wheel, we’ve gathered all the resources here in one place so they are easy to find.

Protecting these routes will help people to get out and about - on a horse or bike, driving a carriage or walking - and experience the natural environment.

Changing the status of rights of way

Cycling UK briefings are a good place to start for an overview of the processes for recording and upgrading rights of way:

The National Library of Scotland has a fantastic online tool to view a wide range of historical maps of Britain and compare them side-by-side.

The man behind all of this is Will Steel, BHS’ 2026 project manager. He told us why it is so essential that these routes are protected:

“Project 2026 is so important as it could be our last chance to safeguard thousands of rights of way that will otherwise be lost at the cut-off date of 1 January 2026.

“Protecting these routes will help people to get out and about - on a horse or bike, driving a carriage or walking - and experience the natural environment avoiding the ever-busier road network.

“The missing routes can often be key links in the minor highway network that also provide an opportunity to meet wider objectives around active and sustainable travel. I would really encourage anyone interested to get involved before it is too late.”

Jack Cornish, Don’t Lose Your Way programme manager, explained his passion for lost rights of way and why you should get involved:

“Our paths are one of our most precious assets. They connect us to our landscapes, and to our history and the people who formed them over the centuries.

“If we lose our paths, a little bit of our past goes with them. This is our only opportunity to save thousands of miles of rights of way and time is running out.

“Joining our group of citizen geographers is a really easy way to help and by doing so, you’ll become part of the movement that puts these paths back on the map for generations to come.” 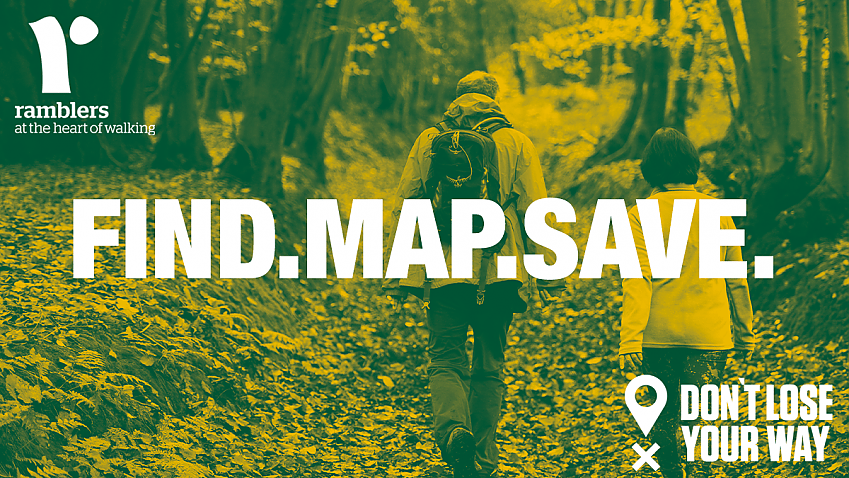 The book ‘Rights of Way: Restoring the Record’ by Sarah Bucks and Phil Wadey is the authoritative source of information on recording lost ways, and provides the basis for the BHS training sessions.

What is Cycling UK doing?

We recognise that BHS and Ramblers have done a fantastic job producing resources and mapping tools to help people put lost ways back on the map, so we don’t want to duplicate their efforts.

However, Cycling UK has been busy researching behind the scenes – most recently involving an application for 24 routes in the New Forest, based on historic records from Parliamentary archives. If successful, this will add around 60 miles of lost bridleways and restricted byways to the definitive map.

The more people that get stuck in, the more routes we can add to the map before they are lost.

The phrase ‘citizen geographers’ used by Ramblers’ Jack Cornish is apt, as Cycling UK members have a long history of contributing to maps. During the first two decades of the twentieth century, Cyclists’ Touring Club (now Cycling UK) members collaborated with Bartholemew maps to provide reliable topographic information about the routes they rode, which Bartholemew would use to update their maps.

Now it’s your turn to help make sure our maps reflect reality.

Our rights of way network is one of our most precious assets. If you want the routes you ride or walk to be protected for future generations, now is your chance to make sure they are on the map by 2026. Get your detective hat on and let’s see what we discover.

The National Parks and Access to the Countryside Act 1949 placed a legal requirement on all local authorities in England and Wales to create a definitive map of public rights of way in their area. This process took a long time (decades in some cases), and many rights of way were left off or incorrectly recorded.

The Countryside and Rights of Way Act 2000 aimed to create some certainty by defining a date when the definitive maps would be deemed 'complete' and no more historic rights of way could be added. This was set as 1 January 2026. Any rights of way that existed before 1949 but have not been added to the definitive map by then will be extinguished and the public right to use them will be lost.

In 2001 the Government set up the Discovering Lost Ways project as a systematic research programme to ensure that the definitive maps would be fully complete by the cut-off date. However, the lengthy bureaucracy involved with processing claims for historic rights of way meant that six years later the project was deemed unviable, having not achieved very much in the time since. So the task of researching lost ways and submitting claims was left to volunteers.

The Deregulation Act 2015 was designed to make the process simpler, but five years later it still hasn't been brought into effect.