2 November 2020 - following periods of wet weather, there are several river crossings which can be difficult and potentially risky when the water is in full flow. In these circumstances you might prefer to plan a detour along the road rather than having to backtrack. Crossing grid references: NH 43999 45380 (road detour via Eskadale and Ardnagrask), NH 41528 95411 and NH 37381 97583 (road detour via Culrain).

6 October 2020 - the dam at Orrin Reservoir between Struy and Contin is currently closed for public access. SSE Renewables say this is only while refurbishment work is taking place, so it is possible to cross the dam between 14:00 on Fridays to 19:30 on Mondays. Otherwise, you can take this detour to avoid the dam.

Check the An Turas Mor website for additional updates for sections between Glasgow and Cape Wrath.

GPX file updated 28 July 2020 with a slight change to the route near Garve - please make sure you have the most current version.

Rides exploring the most remote and wild tracks of the Scottish Highlands.

This section of the Great North Trail follows the ‘An Turas Mor’ route (Scottish Gaelic for ‘the long journey’), developed by Obscura Mondo Cycle Club.

This is the most wild and remote part of the whole Great North Trail, with long stretches of old military roads and hydro scheme tracks penetrating the epic mountainous terrain of the Scottish Highlands.

You’ll need to be well-prepared and fit for this wilderness. Facilities and escape-routes are limited, but it’ll be an amazing, immersive and rewarding experience.

Fort Augustus sits on the Great Glen Fault, which separates the rocky north-west highlands from the Grampian Mountains with a series of lochs, connected by rivers. The mountains and moorland to the north of here are home to many superb, quiet glens, remote lochs and abundant red deer.

You’ll also find sad echoes of ‘The Clearances’, which forced crofters out of their homes to make way for sheep at the end of the 18th century.

The route passes through remnants of the Caledonian Forest, which once covered most of Scotland.

Before you finish up at Oykel Bridge, though, you’ll have cycled through part of the 23,000 acre Alladale Estate where a regeneration project has planted hundreds of thousands of trees and restored dried out peat bogs. 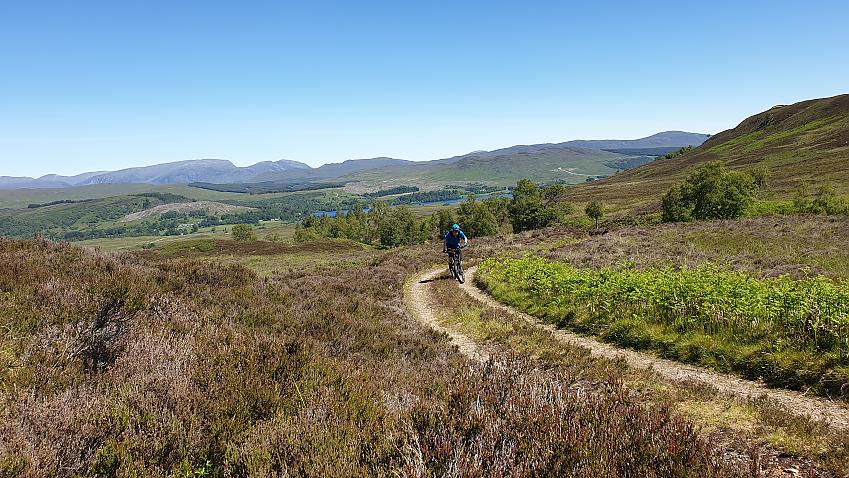 This is true wilderness experience. Photo by Max Darkins

Navigation is relatively simple through the long glens, with few route choices on offer, but it is imperative that you make the right choice - the remote location and lack of mobile reception could potentially be very dangerous.