Remote and wild rides through the Scottish hillsides

To leave Glasgow, you’ll follow pretty riverside paths before heading off onto the trails.

You’ll cover huge distances, riding through very remote, wild landscapes including mountain passes (don’t get caught out by hazardous weather – wind and snow at the top of the mountain passes might delay you for days, and headwinds channelled through the valley bottoms can be morally destroying). This makes this section physically tough, although the gravel tracks are very rideable (nevertheless, the Corrieyairack Pass will probably defeat many people).

Otherwise, picturesque loch-side tracks, little beaches, stunning views, a legendary monster and just enough facilities (cafes and accommodation) along the way, give it the perfect amount of adventure.

This section finishes at Fort Augustus – the southern end of Loch Ness – right in the heart of Scotland. 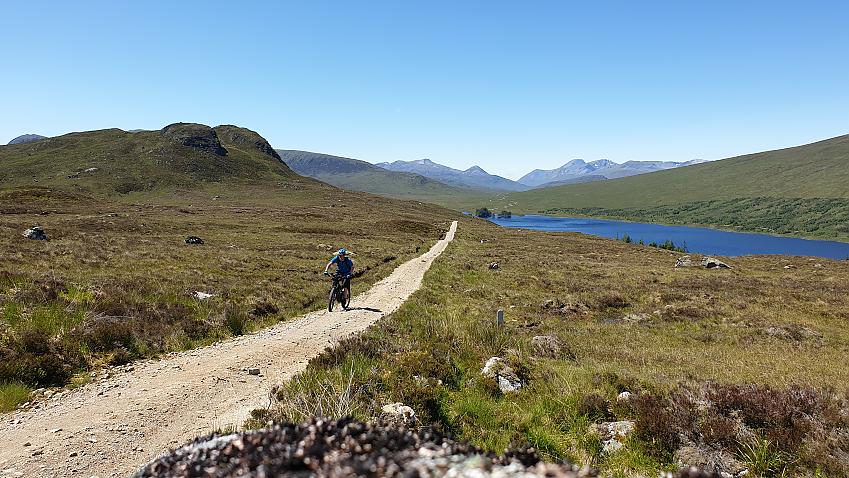 Big, wild landscapes await you in the Trossachs. Photo by Max Darkins

The route is pretty easy to navigate because there aren’t very many options. Once you have found the correct track off roads or when exiting towns, it is usually a case of following the main track for a number of kms until you reach something, or anything, else.

You may also see a few ‘Au Turas Mor’ stickers up along the route, which will also confirm you are on the right track.

Blue: Drymen to Falls of Leny

Green: Falls of Leny to Strathyre

Green/(Blue): Balquhidder (the short climb up the hill at the start is Blue) to Lochan Lairig Cheile

Red: Kenknock to the top of the pass

Blue: down from the pass to Bridge of Balgie, and from there to Rannoch station

These ratings use the mountain bike trail grading system - see here for an explanation. Difficulty ratings are intended as a guide only, to help you decide which sections are best for you.

The Great North Trail: best for wilderness, climbs and descents View
Cycling UK continues to support the UK to cycle
This remains true during this difficult period with the ongoing threat of coronavirus Covid-19
Read our latest advice on cycling
Join Cycling UK to help us change lives and communities through cycling
Membership gives you peace of mind insurance, discounts in cycle shops, rides & routes
Join now