Ray's service to, and enthusiasm for cycling - in particular cycling in the East Midlands area - is outstanding. We spoke to new Secretary Neil Dixon, who nominated Ray, about his numerous achievements.

Ray Clay, who served as Secretary of the Leicestershire and Rutland Member Group (previously known as the District Association) for 23 years, has also been President of the group on numerous occasions.

"Ray has also been very active in organising many of the iconic local events and activities: he has been Secretary to the East Midlands Member Group for the 15 years of its existence, and is the instigator of the annual Beaumanor Hall spring bank holiday cycle camping weekend in Leicestershire."

He was also the organiser of the annual carol service for Leicestershire and Rutland CTC, and involved in the group's Triennial Veterans' rides.

"He has also been a leading light in the annual Meriden memorial service for fallen cyclists."

On top of all this, Ray has also undertaken a lot of campaigning work for cyclists in Loughborough and the surrounding area.

Ray, who is no stranger to honours, was awarded a Certificate of Merit by Cycling UK (then known as CTC) in 2011 and was also a winner for the East Midlands region in the CTC National Volunteer of the Year awards in 2005. 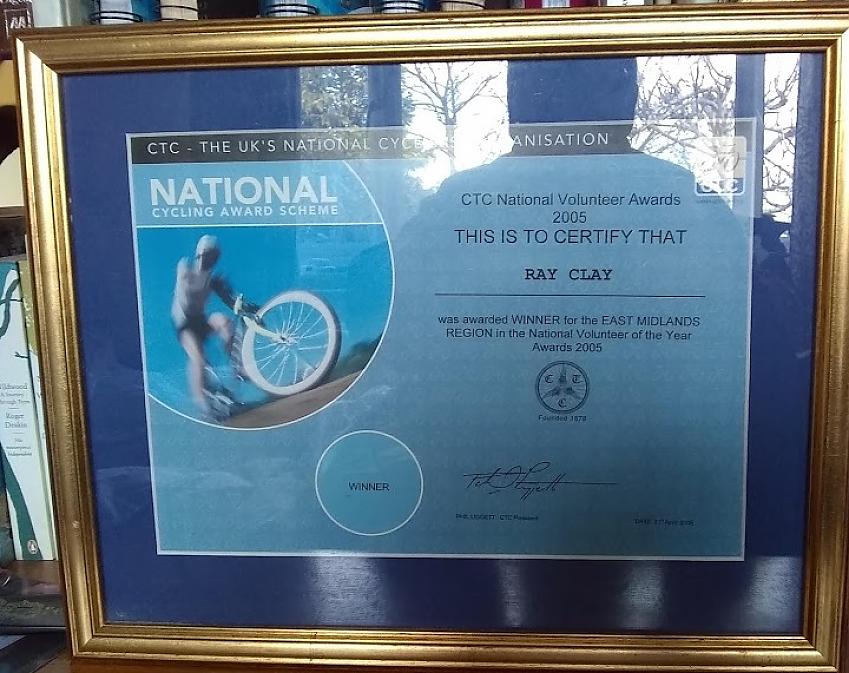 I have had a hand in organising a number of events, it's a satisfying feeling when they go as planned.

His many achievements have not been without the odd hiccup along the way: "I once had to cancel a carol service at very short notice because of six inches of snow."

He adds, with typical generosity: "I'm pleased to say that my role as Secretary has been made easier with the support of the committee, particularly with having a very efficient minute taker. The Secretary's job is in very good hands with Neil taking over. He has many years experience and I'm sure he will do a good job".

We would like to thank you, Ray for everything you have done for cyclists, over so many years. The support of people like you is vital to Cycling UK's mission to get millions more people cycling.

Also thanks to Neil for nominating him. If there's anybody you'd like to see recognised for their dedication to cycling, please get in touch with the Volunteering Team at Cycling UK.

Cycling in Leicestershire and Rutland View