The Pumped Up Crew is pushing on

The Pumped Up Crew are helping cyclists throughout the country. Photo by Wayne Fox
By Julie Rand
Thursday, 10 September 2020

The Pumped Up Crew is pushing on

More than 200 people have signed up to become volunteer Pumped Up Crew members. We caught up with some of them to find out what they’ve been up to

When we launched the Pumped Up Crew, we hoped we could attract an army of willing volunteers ready to take on a small number of tasks each to enable the boom in cycling created by the pandemic to keep on going.

We've been amazed by the numbers of people who have rushed to sign up, with around 240 of them from all over the country now involved. The crew range in age from 24 to 81 and are equally split between male and female. Around 75% are new volunteers to Cycling UK.

These amazing volunteers have now completed nearly 200 tasks, which have taken over 300 hours in total. The tasks vary according to the role but there are three that we ask all of the Pumped Up Crew to undertake:

Heather says she advertised the World's Biggest Bike Ride by posting about it on: "Lancashire Cycle Link, Breeze Champions, RVCRC Open, & RVCRC Members Facebook pages," while Mark used LinkedIn, Twitter and Strava to spread the word, as well as putting it in his company's weekly newsletter. He says: "I'm wearing the T-shirt and overusing the phrase 'Pumped Up To Cycle'. I've been doing this at home, at work and anywhere in between," adding: "I'm definitely pumped up to cycle and I'd hope my network know it's the World's Biggest Bike Ride this Saturday!".

There are three different roles the Pumped Up Crew can do, each one has its own specific activities to undertake:

Using social media to promote Pumped Up is also the main task of the Promote volunteers using #PumpedUptoCycle, as well as Cycling UK's other projects and programmes, to reach as wide an audience as possible. Mike, for example, "shared and retweeted new posts, specifically Local Bike Shop Day and WBBR" and Stuart has promoted Cycling UK and notified all the cyclists in his village about the work undertaken by the charity, upcoming events and how to join in. 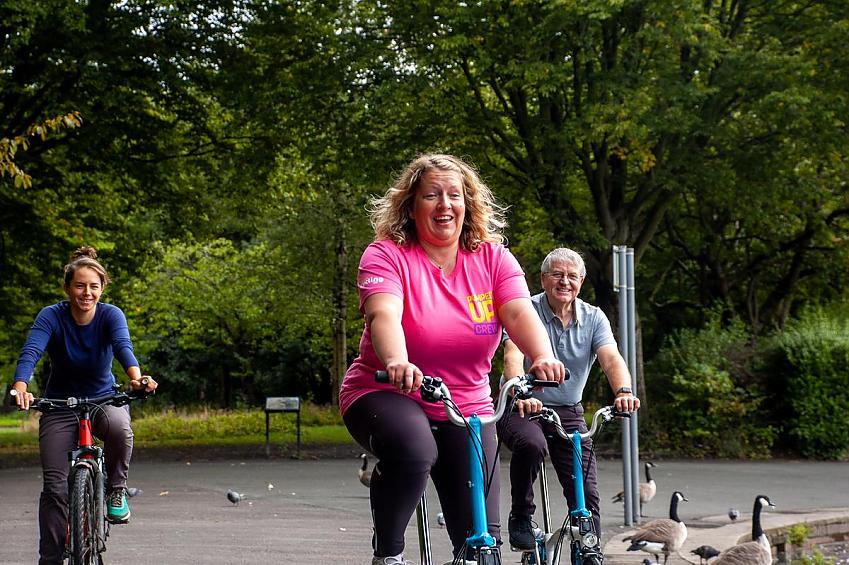 Providing encouragement to a new cyclist. Photo by Adrian Wills

Meanwhile, our Pedal volunteers have been very busy up and down the country getting friends and family out on their bikes. Jenny says she "took a friend on her second ride after a success last weekend.They managed to ride the whole way, and not walk at all this time, plus learned how to change gears". Karen took a friend and her daughter to buy a bike while Alice took a friend cycling for her first time in ten years. Charlotte has gone a step further and set up Charlie's Angels, a new group within her existing club, the idea being "to support new group riders with informal rides so that they can gain confidence and the skills to ride with the main group."

I am their personal cheer squad - they've now done their first 10-mile bike ride, immensely proud of them.

Rachael has also been encouraging others. She says: "I've supported a friend to buy a bike, then helped and supported them in getting it roadworthy and I am their personal cheer squad - they've now done their first 10-mile bike ride, immensely proud of them." Jacqui met her friend Dean at Redhill and used the NCNs to cycle to Gatwick and Crawley, using the Worth Way, Forest Way and Cuckoo Trail to get to St Leonards. It was a great day with a friend who has got back into cycling over lockdown." 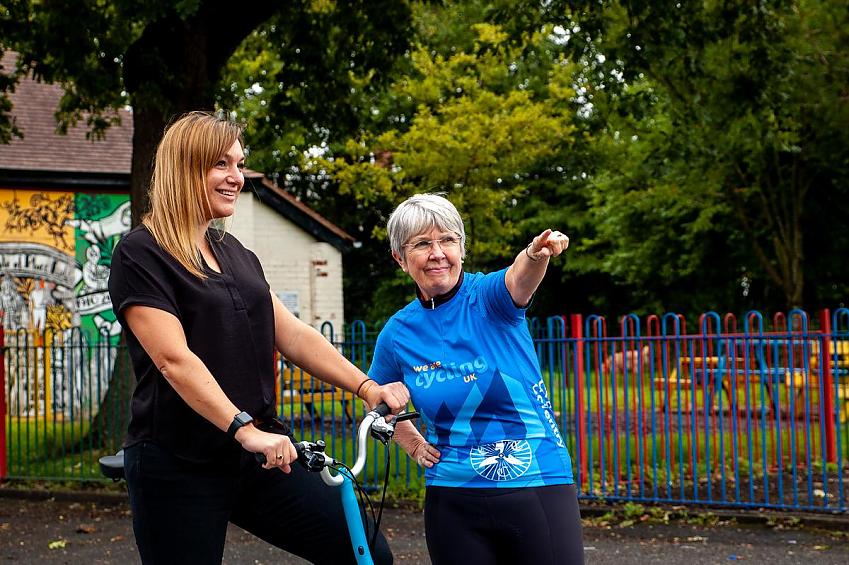 The Partner Pumped Up Crew volunteers have also kindly been giving their time and experience to help others by compiling information about the cycling provision in their local areas and distributing it to existing and new riders. For example, Ritch has been looking at increasing cycling in Surrey. He has not only set up a new Facebook group - Woking #PumpedUpToCycle - to help promote the campaign in the town but has also researched and uploaded a file with information for new cyclists in the Woking area, as well as signing up for the World's Biggest Bike Ride and promoting it on Facebook and Twitter.

Ian, another Partner volunteer, says he was surprised how much information there is about cycling and walking on the Blackburn with Darwen council website. He was also pleasantly surprised how many organisations there are providing cycle training.

Head of Volunteering at Cycling UK Alex Cuppleditch says: "Many thanks to these and all the other Pumped Up Crew who have made such a success of the campaign so far by taking on and completing the various tasks. We hope it will continue to run throughout the autumn encouraging and enabling people up and down the country to keep on cycling through the cooler months ahead and help us in our mission of seeing a million more people cycling in the UK."

Why don't you join the Pumped Up Crew too and see whose life you could change through cycling?