A new safer route for walkers, cyclists and horse riders connecting the North Dorset village of Okeford Fitzpaine with Shillingstone and the North Dorset Trailway officially opened to everyone on Friday 5 January.

The route, known as Little Lane, has been largely inaccessible for the past 30 years. Running between Shillingstone Lane in Okeford Fitzpaine and its junction with the A357 at Hayward Lane in Shillingstone, it will now improve the safety of those wishing to ride or walk between the three Okeford villages and beyond.

It wouldn’t have been possible without Okeford Fitzpaine’s Dilys and Jeremy Gartside, who saw the potential of opening up Little Lane after one muddy plod back in January 2015.

Dilys, a parish councillor, cycling instructor and volunteer for national charity Cycling UK, gathered local residents to help. They initially attempted to clear the mile-long stretch with shovels, determination and goodwill but, after persistent rain threatened to ruin their work, they realised professional support was needed.

In November 2016, Dilys, wearing her parish councillor hat, applied for funding from the Northern Dorset Local Action Group (LAG), which awards grants from the EU-funded LEADER Rural Development Programme. Just under a year later, the Little Lane Link Project was successful in securing 100 per cent of the funding they asked for, £44,200, due to the rural tourism benefits it offers.

“Jeremy and I immediately saw the benefits of restoring Little Lane from a local community perspective, as it would allow everyone, from grandchild to grandparent to safely walk, cycle or mobility scoot from Okeford Fitzpaine to the Trailway,” said Dilys Gartside. “It was only when we applied for LEADER funding that the wider tourism benefits became clear, as locations such as the North Dorset Railway Trust at Shillingstone Old Station came within reach without car dependency." 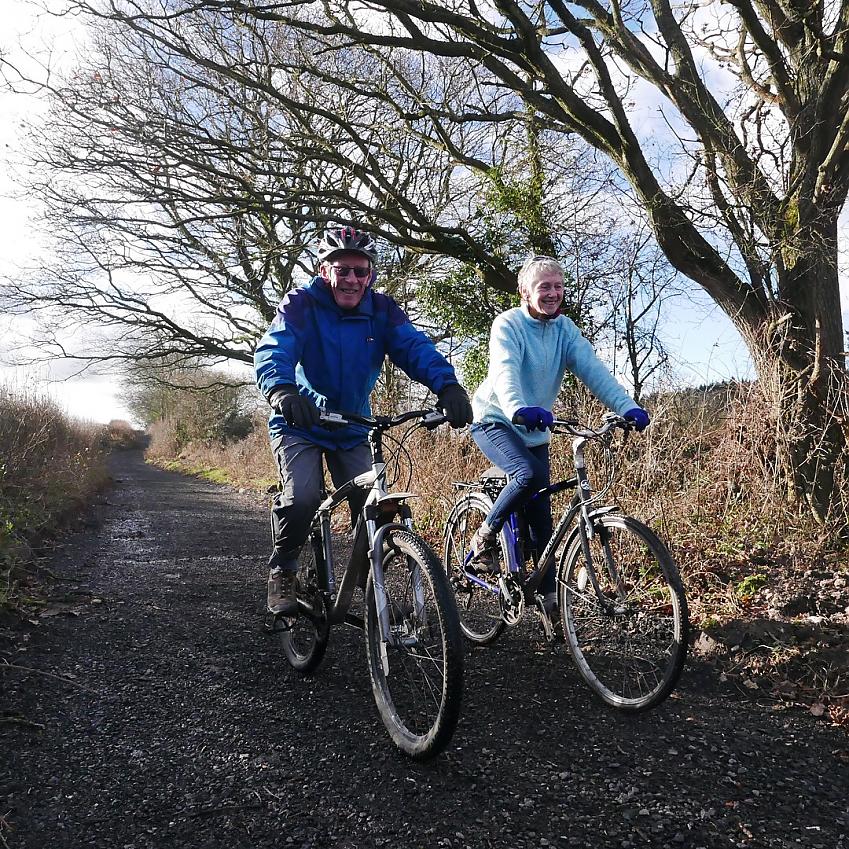 Dilys and Jeremy Gartside enjoying a ride on Little Lane

With funding in place, the Little Lane Link Project team immediately set to work. Three months after the funding was awarded, Little Lane has been transformed by restoration of drainage and a new surface comprising 1,000 tonnes of hardcore and recycled tarmac planings rendering it accessible on foot, bike as well as horse. It remains an unclassified public highway but the plan is for the community to adopt it as a safe route for its vulnerable users and leave motorists to enjoy the tarmacked roads.

The Little Lane Link is now an integral part of the Dorset Trailway, and means people from Okeford Fitzpaine can join the Trailway without risking life and limb on the busy roads around here.

Shillingstone’s Rights of Way officer, Graham Raines, has seen the benefits straightaway, “The Little Lane Link is now an integral part of the Dorset Trailway, and means people from Okeford Fitzpaine can join the Trailway without risking life and limb on the busy roads around here.”

“I think this is a typical North Dorset project: they’ve identified a problem and worked together as a community to find a solution,” said Mr Hoare at the opening, “It’s an appropriate time of year for the route to open as we all make resolutions to be more active – and now we have a very safe route linking communities and making it better for children, walkers and cyclists.”

Dilys and Jeremy will be working with Dorset County Highways on phase 2 of Little Lane Link Project to secure a safe crossing of the A357 to the Trailway opposite, but are also calling for more help from locals. Dilys said, '"In order to maintain the Lane over coming years, we are forming a Supporters of Little Lane Upkeep Group - your local green gym - and will welcome offers of help from any would-be SLLUGs even if just for an hour a month."

To get involved and help with the Little Lane project contact: Jeremy or Dilys Gartside: dgartside@okefordfitzpaine-pc.gov.uk / 01258 860157

Find out more about becoming a volunteer