Latest road casualty stats should be "wake-up call for Government"

Cycling UK continues to support the UK to cycle
This remains true during this difficult period with the ongoing threat of coronavirus Covid-19
Read our latest advice on cycling
The disproportionate risk to people cycling on our roads should be a wake-up call to the Government says Cycling UK
By Sam Jones
Thursday, 26 September 2019

Latest road casualty stats should be "wake-up call for Government"

While latest road casualty stats show you could cycle around the world 35 times before running the risk of serious injury or death, cyclist casualties have continued to creep up over the last 10 years.

The Department for Transport published its “Reported road casualties in Great Britain 2018 annual report” today (Thursday, 26 Sept), and is another example of the Cycling and Walking Investment Strategy’s failure to improve cycling conditions which Cycling UK says should act as a "wake-up call to the Government".

In 2018, 99 people were killed while cycling on British roads, accounting for 6% of total casualties. Cycling UK sees this as a disproportionate level of risk to people following the Government’s ambition to cycle more, as cycling makes up only 1% of total road traffic mileage.

The disproportionate risk to people cycling on our roads...should be a wake-up call to the Government.

Reacting to the report, Roger Geffen, Cycling UK policy director said: “The latest figures show cycling casualties have continued to creep up since 2008. The disproportionate risk to people cycling on our roads – where they make up less than 1% of the traffic but 6% of the casualties - should be a wake-up call to the Government. 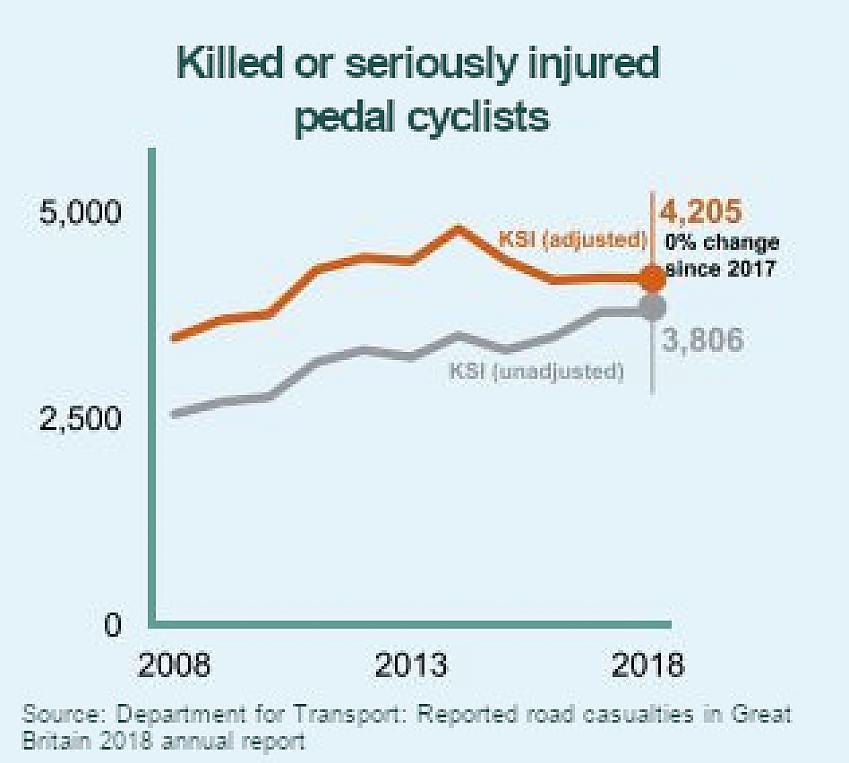 “The Government wants more people cycling, but that won’t happen when they’re not just failing in their ambition to reduce cycle casualties by 2020, but also their duty to make the roads safer for everyone.”

Two of the key objectives within the Government’s Cycling and Walking Investment Strategy (CWIS) of 2017 were to reduce the rate of cyclists killed or seriously injured on England’s roads, measured as the number of fatalities and serious injuries per billion miles cycled (by 2020), while also doubling the amount of cycling trips made.

In the CWIS Safety Review published in November 2018, the Government admitted it would not meet its ambition for doubling cycling trips by 2020, and with the publication of the road casualty figures, it seems unlikely they will meet their safety targets too.

You would have to ride round the world 35 times before you’d run the risk of being killed or seriously injured.

Roger Geffen spells out what needs to change: “One death on our roads is too many - Government must immediately increase cycling and walking funding from its current level of 2% to 5% of transport spending and then double it over the next five years.”

While the risk is disproportionate for people choosing cycling over other modes of transport, the figures still show cycling is not the dangerous activity many think it is. 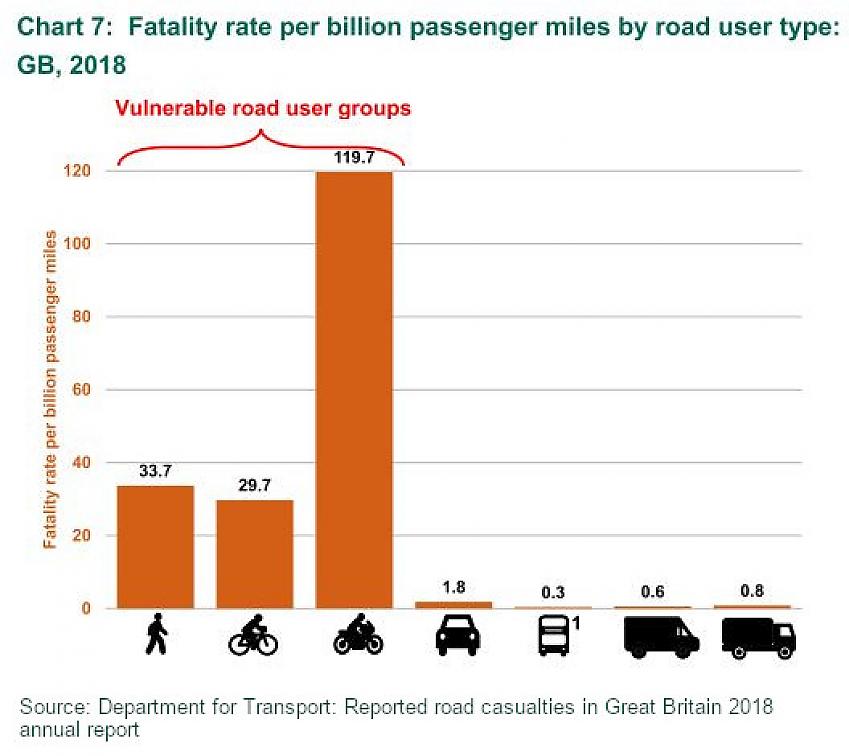 The figures show per billion miles travelled, heading out for a walk is more risky than cycling, and that only one cyclist is killed or seriously injured for the equivalent of 35 trips around the world.

“Yet again the road casualty figures show cycling is not the dangerous activity many believe it is, with a walk more likely to see you killed per mile than a bike ride” said Roger Geffen. “Statistically speaking you would have to ride round the world 35 times before you’d run the risk of being killed or seriously injured.”

Now is the time to act on funding for cycling View

Road casualty figures for 2016: how are cyclists faring? View