Malcolm is a long-time volunteer in cycling. He is a campaigner as well as a founder-member of Cycling UK-affiliate group Harrogate Wheel Easy. His well-deserved award was announced in the Queen's New Year's Honours List in December 2018 and the medal was presented on Tuesday 9 April by Mrs Jo Ropner, Lord Lieutenant of North Yorkshire, herself a cyclist.

Malcolm's medal was one of only two honours for cycling announced in the New Year Honours - the other being an OBE given to none other than Tour de France winner Sir Geraint Thomas!

Malcolm, accompanied by his wife Gia, took time out from his busy volunteering schedule to pick up his award last week, given for his incredible contribution to cycling in his hometown of Harrogate, North Yorkshire.

Malcolm and his wife Gia founded Cycling UK-affiliated group Harrogate Wheel Easy back in 2006 – “a club for people who don’t wear Lycra – and some who do!” – and have seen it go from strength to strength ever since. Malcolm has also been a long-term volunteer campaigner enabling people to cycle on The Stray, a 200-acre park in the centre of Harrogate - where Cycling UK was founded back in 1878.

He was also heavily involved in the creation of the Nidderdale Greenway, a very popular five-mile cycle track from the town to Ripley along a disused railway path. He is also very busy lobbying and fundraising to get the route extended and currently involved in fighting a proposed 'relief' road that could ruin part of it. According to some reports, after his citation was read out at the ceremony, "even Malcolm was quite surprised by everything he'd done!" 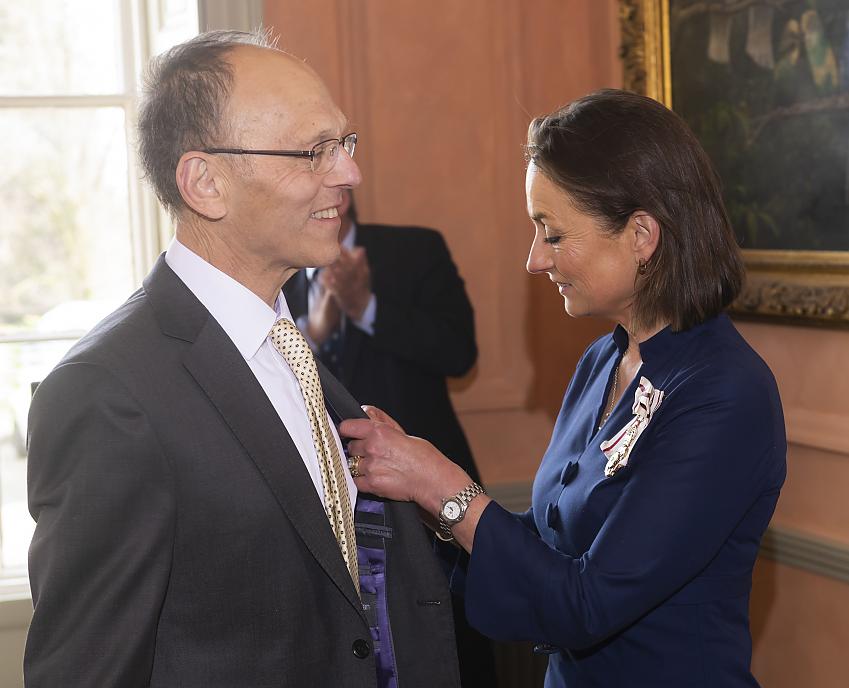 A moment of pride as the British Empire Medal is pinned to Malcolm's chest. Photo by Jemison Photographer

Chair of Wheel Easy James Grimshaw said: "The ceremony took place at Camp Hill, the home of the current Lord-Lieutenant of North Yorkshire, Mrs Jo Ropner, who made the presentations on behalf of the Queen. Six other recipients of the award were also presented with their medals and certificates at the event, which was followed by afternoon tea with some fabulous cakes.

There was also the opportunity to chat with the Lord-Lieutenant, who, it transpired is a very keen cyclist herself. It was an excellent day from start to finish which did Malcolm proud and which he will surely remember for many years to come. Once again very many congratulations to Malcolm on this award from all of us at Wheel Easy."

"It was a huge honour to receive the medal along with six other champions of their local communities, and a wonderful ceremony which my wife Gia and I will never forget.

Malcolm says: "It was a huge honour to receive the medal along with six other champions of their local communities, and a wonderful ceremony which my wife Gia and I will never forget. A big surprise was to discover that the Lord Lieutenant of North Yorkshire, Jo Ropner, who presented our medals, cycles around 5,000 miles a year, including tough challenges in the UK, and stages of the Tour de France. Altogether, an impressive lady!”

The presentation will be followed by a Buckingham Palace garden party in May.

Read more about Malcolm and his dedication to improving conditions for cyclists in the June/July 2019 issue of 'Cycle' magazine.

Congratulations from all of us at Cycling UK Malcolm.