Campaigners from CTC Lincolnshire have lodged an objection to the new road on the grounds that it will sever existing local roads and provide inadequate crossings. The road will be a test of the cycle proofing commitment made by the Prime Minister in 2013.

The new road will cost £96m for under 5 miles – £19m a mile – more than the money being spent on cycling by the Government in eight cycling cities and four National Parks.

£50m will come from central Government, with the rest from developers and the local council.

Andy Townhill, CTC’s lead campaigner in the area, and secretary to CTC Lincolnshire, has submitted an objection, arguing for better crossings of the road. The objection (see presentation below) will be heard at a public inquiry in February.

The Lincoln Eastern Bypass (LEB) slices through seven local roads en route from the A15 to the A158. Although a 3 metre wide cycle track is provided – but only on one side of the road – the crossings of side roads are totally inadequate. This results in an expectation that cyclists, in the words of Lincoln CTC campaigner Rodney Jelfs, will have to “dismount and dash” across the mouths of junctions (see example right). 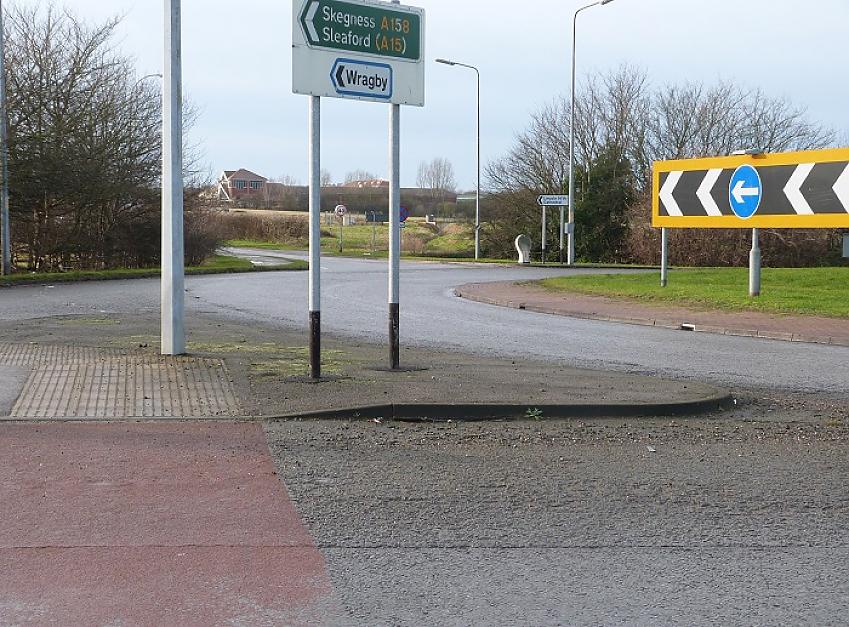 Although Lincolnshire County Council, the promoters of the scheme, have agreed to build an additional bridge for cyclists to cross the road at one point, there remain many junctions where cyclists will have to cross busy roads without dedicated facilities.

Such problems already exist on Lincoln’s western and northern bypass, where the facilities provided are not well used because they are so poorly designed.

These types of crossings are the consequence of previous reluctance on the part of Government to provide decent standards to construct new roads and make sure that cycle facilities are safe to use. The LEB will be a test case as to whether the recent commitment to cycle proofing new roads has any substance.

This new road will be a huge barrier for people on bikes – it completely contradicts the Prime Minister’s commitment to ‘cycle proof’ all roads and make them fit for cycling from the outset.

Presently many of the roads radiating from Lincoln provide vital routes for residents of the villages near the city. Without adequate crossings local cycling trips may well become too hazardous, with residents opting to travel by car instead, adding to the congestion that the new road is supposed to relieve.

CTC wants Lincolnshire County Council to commit to building proper crossings of the new sections, using either traffic lights or, for minor side roads, yield markings to give cyclists priority.

A presentation showing the plans for the various junctions can be downloaded below.

Cycling has been and

Cycling has been and continues to be ‘designed out’ as we upgrade our roads for motor traffic. As roads become wider, faster and busier, they stop being usable by ordinary cyclists –we have, in effect, removed cycling provision and created ‘segregated’ roads for motorists.
But it is worse than that, these roads become gaps in the network for those cyclists going along the route and barriers for cyclists going across the route. Whole journeys becomes longer or even impossible.
The 'upgrading' is taking away cycle infrastructure, the cost of putting it back (even if that now means more expensive tracks or, even, bridges), needs to be treated as an integral part of the cost of the road, not as an optional add-on.
We wouldn’t say ‘Ah, but there isn’t enough money to provide the extra drainage this new, wider road needs’. We shouldn’t say ‘Ah, but there isn’t enough money for the extra cycle infrastructure this new, wider road needs'.
My best wishes to the Lincoln campaigners -our town already suffers from a bypass which cut off the minor roads.