And they’re off... riders leave Stevenage’s Fairlands Valley Park on one of Sunday’s Start of Summertime rides
By Tony Upfold
Wednesday, 29 March 2017

The Start of Summertime lived up to its name as glorious sunshine greeted the 200 cyclists who launched Cycling UK’s new Challenge Ride Series in Stevenage on Sunday (26 March).

Cycling UK Stevenage’s superbly-organised Start of Summertime event provided a perfect opener to the series, which features 16 handpicked rides throughout the country and ends back in the cycle-friendly Hertfordshire town with ‘Emitremmus’ (Summertime reversed) in October.

All those involved – riders and organisers alike – gave the Challenge Ride Series a big thumbs up.

Despite losing an hour’s sleep as the clocks went forward the previous night, everyone was up bright and early to get to Fairlands Valley Park for a choice of four rides – all of which were challenges, not races, with upper and lower time limits.

Twenty-four hardy riders set off at 8.15am for the 210km/130-mile trip all the way to Lavenham in Suffolk and back. Then, at 9am, Cycling UK’s Communications and Media Officer Tony Upfold got the 100-mile (160km) ride underway.

Among those taking part were Stevenage’s Nicola and Jason Morris, attempting their first century ride. A group of seven from Cycling UK Stevenage – Nicola, Jason, Penny Schenkel, Lynn Bonnici, Jim Brown, Matthew Newton and Steve Lusby – soon settled down into an excellently-paced ride, giving time for a relaxed lunch break in picturesque Finchingfield and a finish at 7.20pm… with 20 minutes to spare!

Also involved in the 100-miler were members of the Twin Towns 1000 team (pictured below), preparing for their big fundraising foray across the Channel in June. 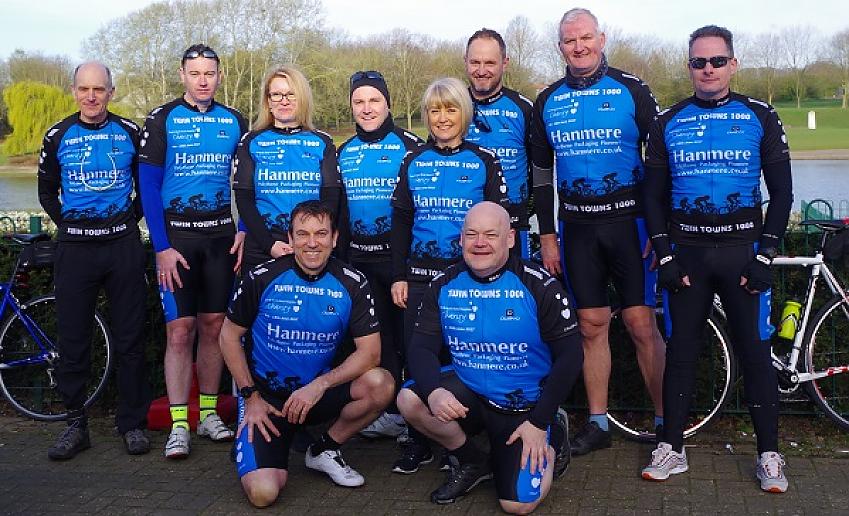 The 1000 team will be riding to Stevenage’s twin towns of Ingleheim in Germany and Autun in France from 9-18 June, in aid of their local Lister Hospital. Among those from the team taking part in Sunday’s ride were Cycling UK members Peter Woolmer, Steve Watkins and Graham Hoare, who was treated for prostate cancer at the Lister.

The Deputy Mayor of Stevenage, Councillor Pam Stuart, who attended with Consort Tony Turner, was on hand to start the most popular ride, with 87 people tackling the 115km outing to Thaxted and back. Last but not least, 56 set off on the 62km ride (nearly 40 miles), on a loop that took in Reed, Barkway and Hare Street.

Many on the shorter rides were delighted with their achievements. They included 14-year-old Marriotts School student Sophia Morris, accompanied by Jenny Smith, and Helen Harris, who rode with Jackie Cooper - Cycling UK Stevenage Social Secretary and Ride Leader - enjoying a rare excursion on sweeping duties.

Helen only bought a bike last October and the previous longest distance she had cycled was 22 miles. The keen Cycling UK member said: “I feel a great sense of achievement. I’m amazed at myself, to be honest – and I didn't get off and walk uphill once!”

At the other end of the scale when it came to cycling experience was Rona Wightman, CTC South Herts Five Miles to Fabulous Ride Leader and Secretary of the St Albans Cycle Campaign. She completed the 62km route with Debbie Thorne (pictured below), who has become an ardent cyclist thanks initially to Rona’s Five Miles to Fabulous group.

Organising Stevenage’s 24th Start of Summertime event were Jill and Jim Borcherds. Jill said: “I think the Challenge Ride Series is a brilliant idea. Jim and I are hoping to ride 10 of them over the coming months. I like the fact that this is a Cycling UK event. The proportion of Cycling UK riders participating today is much higher than it has been in the past.

“One of the nice things about these events is that we recruit people for our other club rides at Stevenage, and then they become members.”

Tina Walker, Chair of Cycling UK Stevenage, is another fan of the Challenge Ride Series. She said: “It’s a great reason to go out on new rides around the country and see different places.

“The day was a great success thanks to the superb organisation of Jill and Jim Borcherds, plus the 20 volunteer helpers who were scattered far and wide on control points or sweeping. You cannot run an event without your volunteers, and I would like to thank all of ours for doing such a fantastic job.”

The Challenge Ride Series is a brilliant idea and we are hoping to ride 10 of them over the coming months. I like the fact that this is a Cycling UK event.

Jill Borcherds, who organised Stevenage’s 2017 Start of Summertime rides with her husband Jim

Jim Brown, the Stevenage group’s Secretary and a member of Cycling UK’s Board of Trustees, said: “The Challenge Ride Series is a great initiative which perfectly sums up the essence of Cycling UK and our aim to encourage people across the country to get out cycling.

“Over 3,000 people are expected to take part in the 16 rides in the series in total, giving them the chance to cycle a range of distances in some of our amazing countryside and perhaps discover an area they haven’t visited before. We’d welcome as many Cycling UK members as possible to take part – and why not bring along a friend or two? We've found that events like this are a good way to recruit new people to regular group riding, which is another big positive.”

Next event in Cycling UK’s Challenge Ride Series is on Sunday 9 April – the Early Season Challenge Ride organised by Two Mills (Wirral) CTC, which starts from Farndon, near Chester.

Successful participants in the Challenge Ride Series could receive a handsome medal (most with a ribbon branded with the event name), a commemorative certificate and a Cycling UK goodie bag. Anybody who completes a minimum of 3, 5 or 10 events can order an additional bronze, silver or gold medal, with a special award for anybody who completes all 16!

A full feature article about the Start of Summertime event will appear in the June/July edition of Cycle magazine.