Our Young Achiever and Volunteer of the Year award winners Will Hsu, Charles Stevens and Tom Hibbs, with Welna Bowden, Cycling UK Trustee and Chair of the Awards Committee
By Tony Upfold
Wednesday, 12 October 2016

Young cyclists Tom Hibbs, Charles Stevens and Will Hsu took centre stage at Cycling UK’s hugely successful Annual Members’ Get Together in Manchester. Tom, Charles and Will have very different cycling stories, but they had one thing in common on Saturday (8 October) – they were all winners of our top annual award.

The trio proved Cycling UK has a bright future as they were presented with the Arthur Moss Medallion as our Volunteers of the Year, having also been named joint winners of our Young Achiever of the Year accolade.

Tom (21) was homeless little more than a year ago but has turned his life around since being introduced to Ceracycloan, a bike restoration and education centre in Stockport which is affiliated to Cycling UK and involved in our Big Bike Revival project.

Old school friends Charles and Will, who have both now started at university, pedalled 10,000km from Beijing to Tehran over 114 days this summer, raising more than £30,000 for a children’s charity. Charles (19) and Will, who was 18 at the time of the ride, have submitted a claim to Guinness World Records to be recognised as the youngest people ever to cycle the Silk Road.

The respective achievements of Tom, Charles and Will were among many inspirational stories as the conference floor of the Holiday Inn near Manchester Piccadilly station was taken over for a celebration of all things cycling.

About 100 Cycling UK members attended the Annual Get Together to acclaim numerous award winners and discuss everything from cycle campaigning to group promotion (not to mention their summer touring trips). They were joined by four very special guests:

Cycling UK Chief Executive Paul Tuohy welcomed everyone to the Get Together, declaring: “We are here to celebrate our members and volunteers and cycling in general.”

Paul used his opening address to highlight the impressive work carried out by Cycling UK during a “fantastic” year for the national cycling charity – illustrated by an infographic listing a striking string of statistics.

He said: “Our members have given a staggering 1.5 million hours of voluntary time to get 1 million people cycling. We helped 95,000 people to overcome personal barriers to cycling. Over 26,500 supporters took more than 38,000 campaign actions to advance cycling in the UK, and our member groups ran over 13,000 led rides.

“Half a million people took part in Bike Week. We brought 24,000 cycles back into use through the Big Bike Revival and we trained 4,000 people with cycle skills, ride leadership and maintenance knowhow. We really ARE Cycling UK.”

Paul (pictured far right, below) then hosted a lively, entertaining and informative Q&A session involving (left to right) Stephen, Julian, Caroline and Isla, with questions both from the audience and from members via email. Topics included equipment for endurance rides, how to encourage more women to cycle, and making streets safer for cyclists and pedestrians…to name but a few. 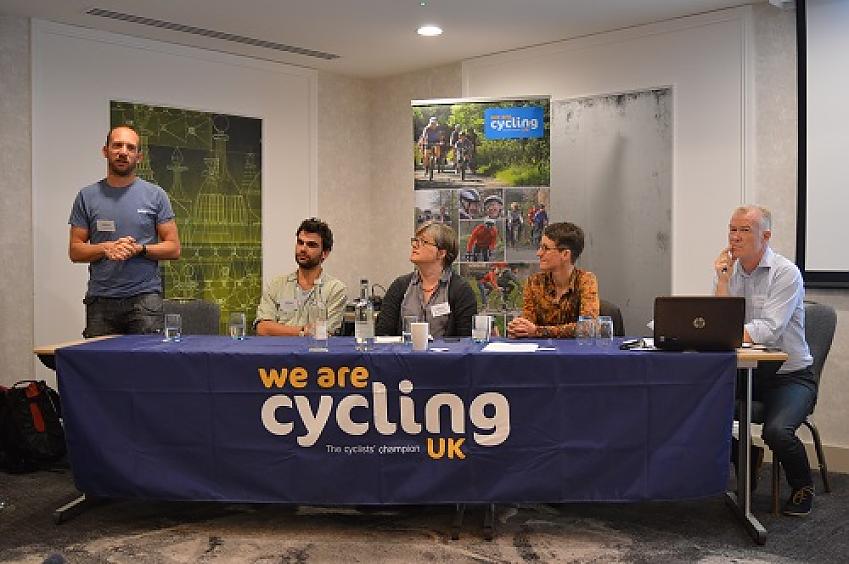 The most eccentric question of the day came from semi-retired nurse and Bikeability instructor Vincent Walsh, from Manchester, who asked the panel: “I don’t wear a helmet, I do wear flowers on my handlebars. It gets people talking…about cycling. Am I crazy?”

The answer was a resounding “No”!

Members then split into three workshop groups to listen to presentations and get involved in discussions about the Space for Cycling campaign, the Big Bike Revival and Member Groups promotion.

Following lunch, it was awards time – starting with the winners of the Tourist Competition, which resulted in a clean sweep for Chester & North Wales CTC. 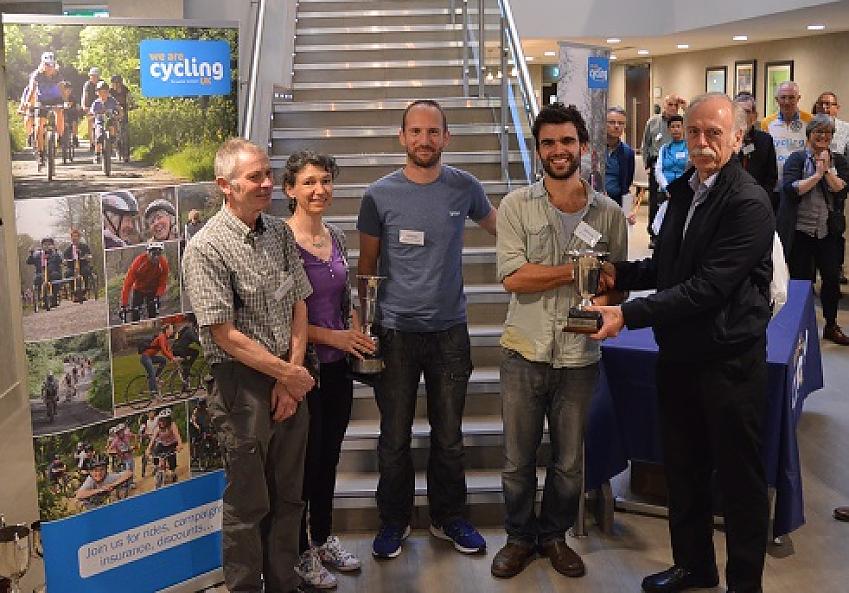 Caroline Russell presented the Best Campaign award to Jeremy Gartside, who has metaphorically moved heaven and literally moved earth to make the North Dorset Trailway a more attractive and usable cycle route in his community. Jeremy organised volunteers to clear tons of mud from a missing link of unclassified highway known as Little Lane, which could link one village directly to the Trailway. 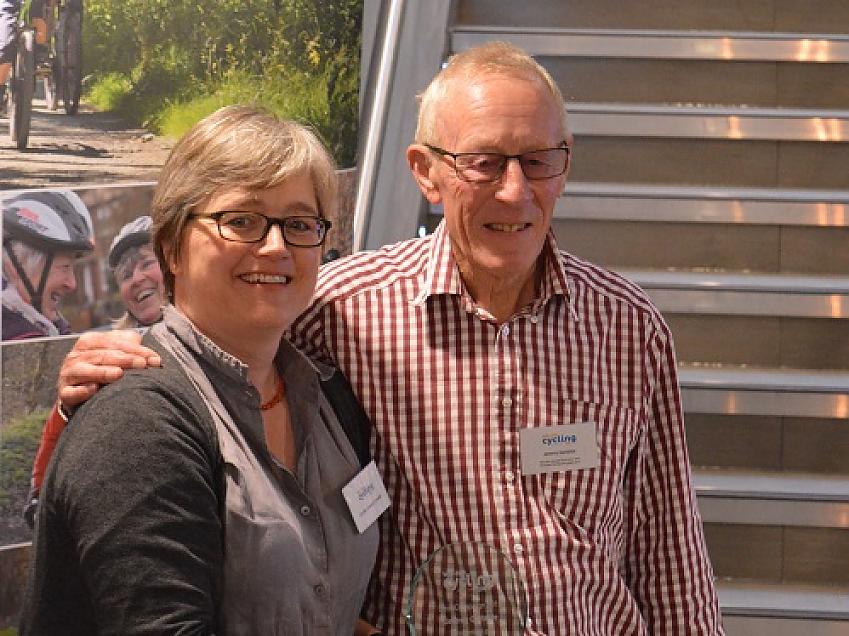 Whalley Range on Wheels and Onna Bike were joint winners of the Best Community Project, also presented by Caroline. Onna Bike offers free weekly sessions for the local community in Bradford with the aim of teaching people to ride and improve skills. At Whalley Range on Wheels, a band of committed volunteers has worked tirelessly for almost a year to make Alexandra Park in South Manchester a real hive of cycling activity for hundreds of people. 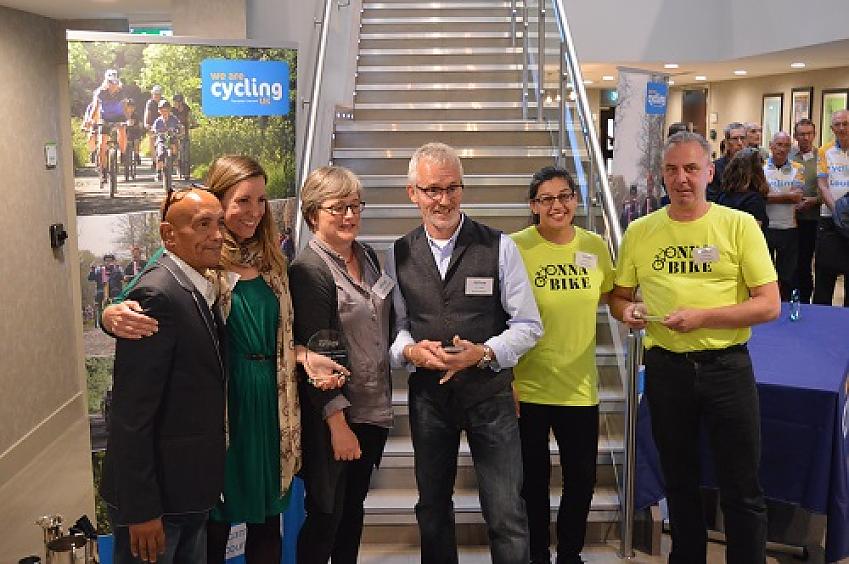 Julian and Stephen made the next presentation, which went to Streetbikes for the Best Group Achievement or Cycling Event. Streetbikes is a Cycling UK-affiliated group that puts on a variety of activities for the community and this year organised a mixed-ability, all-inclusive 100km ride in a figure-of-eight around Kirklees, run in memory of our former Councillor John Radford, which attracted over 300 participants. 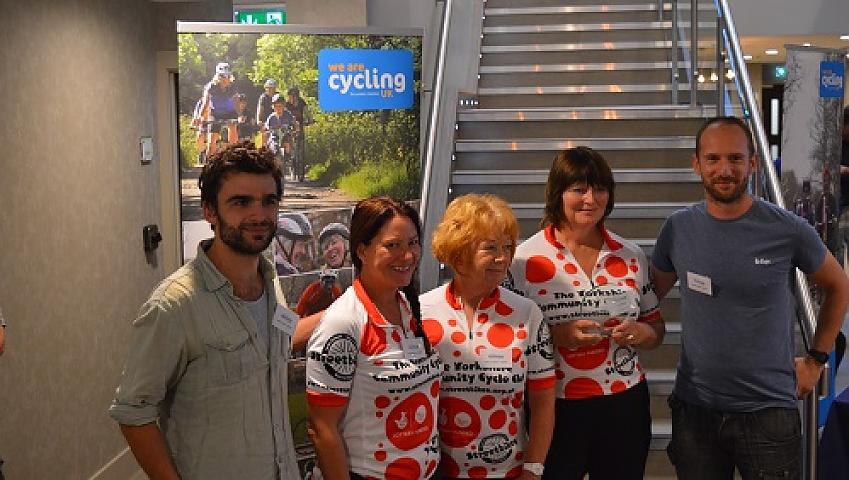 Shelia Tuckwood, secretary of CTC Grampian for the past 20 years, was presented with the award for Best Volunteer Achievement by Isla. The Grampian group puts on a wide range of runs and also supports the Try Cycling initiative, which is aimed at encouraging new riders to give cycling a go and is now in its 12th year. 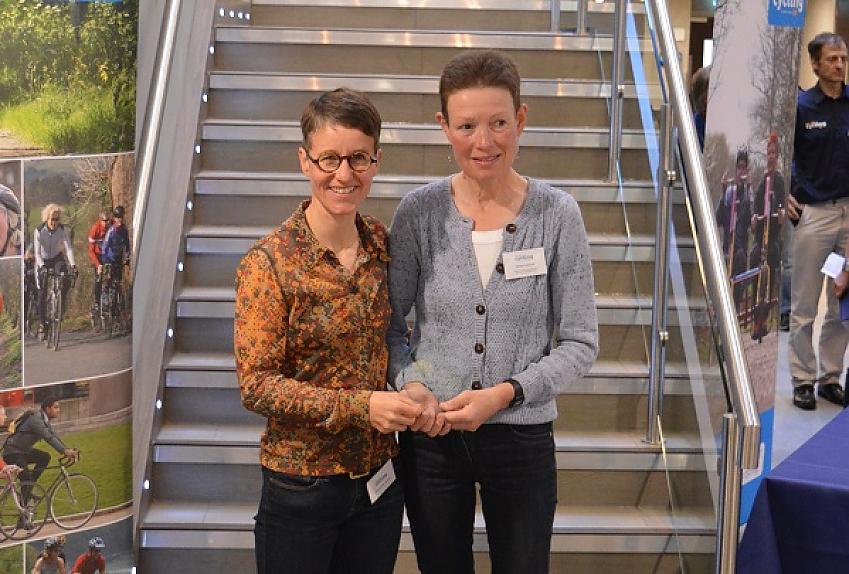 Isla stayed in place to hand over the next award as Tom, Charles and Will were named as joint winners in the Young Achiever of the Year category. Cycling UK Marketing Director Matt Mallinder, who hosted the awards ceremony, swiftly called Tom, Charles and Will back into the spotlight as he announced the young trio had also jointly won the Arthur Moss Medallion for the Cycling UK Volunteer of the Year – which was presented to them by Cycling UK Trustee Welna Bowden, Chair of the Awards Committee.

Tom said: “It feels amazing to win this award – like crossing the finishing line after a massive bike ride. A year ago I wouldn’t have attended an event like this, I was so lacking in confidence.”

Charles said: “It was incredible to hear we had won the top national award from Cycling UK, especially as we didn’t even know we had been nominated! It’s a wonderful reward for us but also reflects on all the friends and family who gave so much encouragement and everyone else who supported us so generously.”

Will added: “It’s really good to be a member of Cycling UK and be part of a charity which does so much good work in local communities. It’s great to see there is an organisation encouraging young cyclists and recognising young people.”

It feels amazing to win this award – like crossing the finishing line after a massive bike ride. A year ago I wouldn’t have attended an event like this, I was so lacking in confidence.”

Tom Hibbs, joint winner of the Arthur Moss Medallion for the Cycling UK Volunteer of the Year

Special mention was also made at the awards ceremony of Kieran Foster, Michael Cross (and the Chester Cycling Campaign), and Paul Rogers, all of whom the Awards Committee highly commended for their support, dedication and volunteering achievements in the last year.

A jam-packed day continued with more workshops in the afternoon. Assisting with the Off-Road Cycling Campaign workshop were campaigner Kieran and fellow award winner Paul, who took a leading role in the development and promotion of the long-distance off-road route used in the production of Extreme Wales with Richard Parks.

Daniel Robinson, from the Big Bike Revival centre Peloton in Liverpool, aka Bike Lad, spoke at the workshop entitled Our Community Champions. Giving their insightful views on Member Groups growth at the third afternoon session were Drew Moyes and Pat Standen from CTC Ayrshire, followed by Gill Greaves and Cynthia Collinson of Streetbikes.

Workshops over, Cycling UK’s Chief Executive Paul Tuohy then closed proceedings by thanking everyone for their attendance and valuable input, while issuing a rallying cry for the future.

He said: “It’s not just about being a Cycling UK member or supporter, it’s about being a cyclists’ champion – helping us as the national cycling charity to promote, support and encourage cycling in your local communities. We want to make cycling a normal everyday activity that can be enjoyed by everyone.”