Play on Pedals is the best by smiles!

A study in concentration during a Play on Pedals session at Drumchapel
By Tony Upfold
Tuesday, 9 February 2016

Play on Pedals is the best by smiles!

Cycling UK is helping thousands of Glasgow four-year-olds to learn to ride a bike through the popular Play on Pedals project – and it’s been fun all the way.

Three thousand youngsters have now been taught to cycle before they start primary school and the success of the Play on Pedals training programme is perfectly mirrored in the children’s smiling faces and increased self-confidence.

Play on Pedals is the first project of its kind in the UK and was made possible by players of People’s Postcode Lottery. It was launched after scooping £232,000 in the lottery’s 2014 Dream Fund, following a funding bid led by Suzanne Forup, Cycling UK’s Head of Development Scotland.

The award recognised that Play on Pedals allows people to realise dreams they would not otherwise be able to, as well as the fact it involves a partnership between four organisations – Cycling UK, Cycling Scotland, The Glasgow Bike Station and Play Scotland.

First and foremost, the project aims to deliver pre-school cycle training for 7,000 kids across Glasgow – with the emphasis on having fun.

The Play on Pedals logo features Wee McWheelie, designed by seven-year-old Mia Coppin from Bridge of Allan in a competition.

Cycling can help transform the lives of young people. It gives them independence and the chance to develop new skills, as well as being a fun way to maintain a healthy lifestyle.”

The cycle training itself involves a whole host of exciting games for the children, to entertain and teach them at the same time. These include Walk the Plank (to improve balance skills), Musical Brakes (learning how to stop the bike), Frog’s Legs (teaching them how to push off with two feet on a bike), Snake Slalom (cycling around cones) and Pirate’s Treasure (to help steering and observation)…to name but a few.

Other aims of the Play on Pedals project include:

Polly Jarman, Play on Pedals Development Officer, said: “More than 3,000 children have now come through Play on Pedals and the feedback has been extremely positive – from the youngsters themselves, the groups delivering training, and the families.

“The kids love it – and it is so much more than just riding a bike. It is a learning opportunity for them, linked into their early years curriculum, with things such as confidence, listening, communication, resilience and social skills all being evaluated.

“Parents say their children talk about Play on Pedals at home and ask about going out on a bike, which can only be a good thing in the long term for their health and well-being.

“Nursery staff have seen development in all the children and the training has helped those with issues such as hearing difficulties or English as a second language, for example. Such has been the response that the nurseries have started inviting parents in for sessions as well.

“We have also trained more than 200 instructors, some of whom had not been on bikes themselves before. The majority of trained instructors are women, with most of them saying they hadn’t been on a bike as an adult, so they are rediscovering cycling. Ten have gone on to become instructor trainers.

“It has been recognised as such a successful project that partner Cycling Scotland now has the funding to roll-out the programme nationally.”

Anne Glass, who lives in Drumchapel, was the project’s first qualified Instructor Trainer, helping to teach Play on Pedals volunteers to become instructors.

Anne, a trained karate coach, said: “During Play on Pedals sessions we’ve developed new balance games, incorporating the martial arts and yoga training I’ve had, into a fun and diverse physical activity hour with the children.

“It’s a joy to help teach children how to ride a bike through Play on Pedals, and it will hopefully encourage them to want to use a bike for everyday journeys as well as leisure rides for the rest of their lives. Play on Pedals has really grown and I’m really excited about the project.”

Senga Laurie attended the Play on Pedals instructor training on behalf of her nursery Langa Street, in the Maryhill/Cadder area of Glasgow. Senga is now known to everyone in her nursery as the ‘Bike Lady’!

She said: “My biggest achievement personally has been using Play on Pedals to teach my five-year-old daughter to go on a bike. I’m so proud of myself and her!” 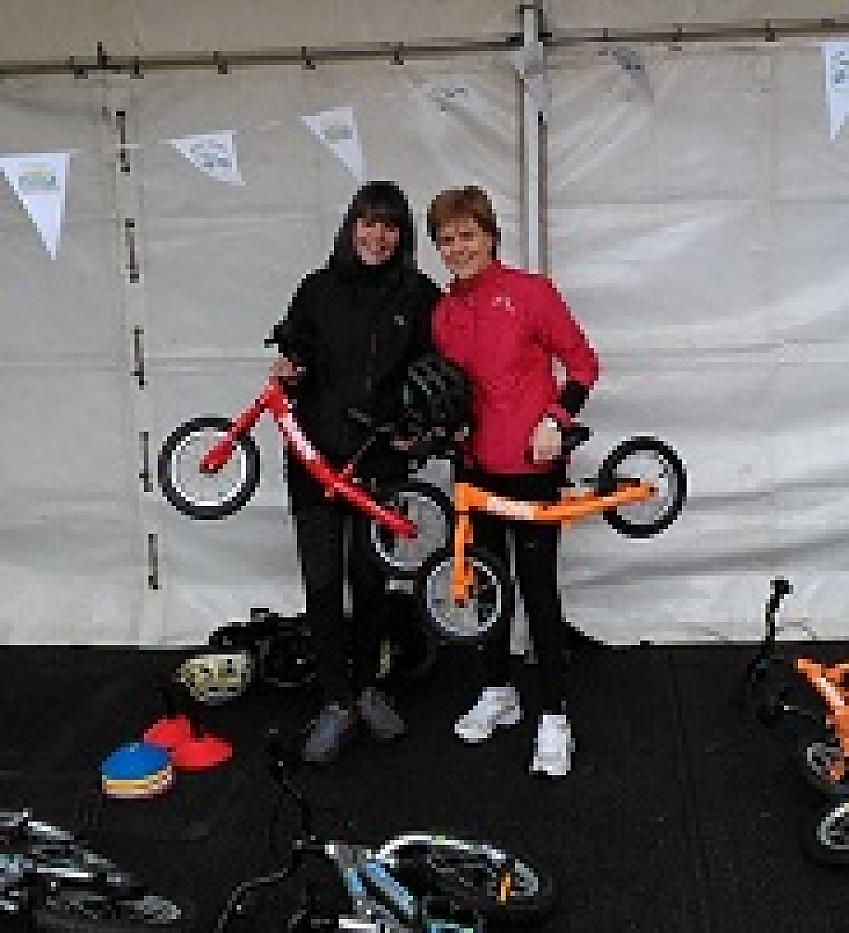 ​Polly Jarman (pictured right with Nicola Sturgeon, First Minister of Scotland) added: “Cycling can help transform the lives of young people. It gives them independence and the chance to develop new skills, as well as being a fun way to maintain a healthy lifestyle and providing the potential to develop a passion for sport and keeping fit.

“Much of the training takes place in the children’s learning environment so they feel comfortable, with people they know. Within the first hour there is such an improvement with them, not just being on the balance bikes but how outgoing they are. They are outside playing and having a great time.

“Play on Pedals isn’t only about the young children, either – it also engages their families and friends and brings all members and generations of the local community together.

“We have offered bike maintenance training to parents and others engaged with Play on Pedals – about 35 to 40 of those people are coming through.

“Primary schools are becoming interested, which would take the cycling ‘journey’ for children from Play on Pedals through to primary school aged children.

“Bike shops are now going in to nurseries and fixing bikes, project partner The Glasgow Bike Station has seen more families coming in to buy cycles, 150 second-hand bikes from the ‘Bike Amnesty’ donated by Glasgow have been turned into balance bikes, and one parent who went around asking for bikes to be donated to the project managed to get 15 in a week, which she picked up.

“As all that proves, the positive spin-offs from Play on Pedals seem to be endless. It has taken on its own life – and the children of Glasgow are reaping the benefits.”

You can keep up to date with Play on Pedals on Facebook and Twitter or email polly.jarman@cyclinguk.org.uk for more information.