Critical report is not tough enough on police and prosecutors

Critical report is not tough enough on police and prosecutors

Police and the Crown Prosecution Service (CPS) have been criticised in a watchdog’s report published today, but CTC says some of the criticisms should have been even sharper.

The report, written jointly by the HM Inspectorates of Constabulary (HMIC) and of the Crown Prosecution Service (HMCPSI), looked at how road deaths were handled in a sample of six police force areas.

It particularly criticised the police’s provision of victim support (found to be flawed in 75% of cases), a lack of training for prosecutors, poor record-keeping on CPS internal decision-making, and frequent changes of personnel handling cases – only 38% of cases were handled by the same prosecutor from start to finish.

The legal system must recognise that, in law, driving which causes obviously foreseeable danger should be charged as ‘dangerous’ driving, not ignored or dismissed as mere ‘carelessness.’"

However, CTC is dismayed at the report’s analysis of charging decisions. It found that 89% of the 72 cases investigated by the HMCPSI inspectors had been correctly charged by the CPS, yet the eight supposedly 'incorrect' decisions were to prosecute cases where the inspectors felt there was insufficient evidence. This included four cases of pedestrians killed at night, where the inspectors felt the driver could not have been expected to see the victim. 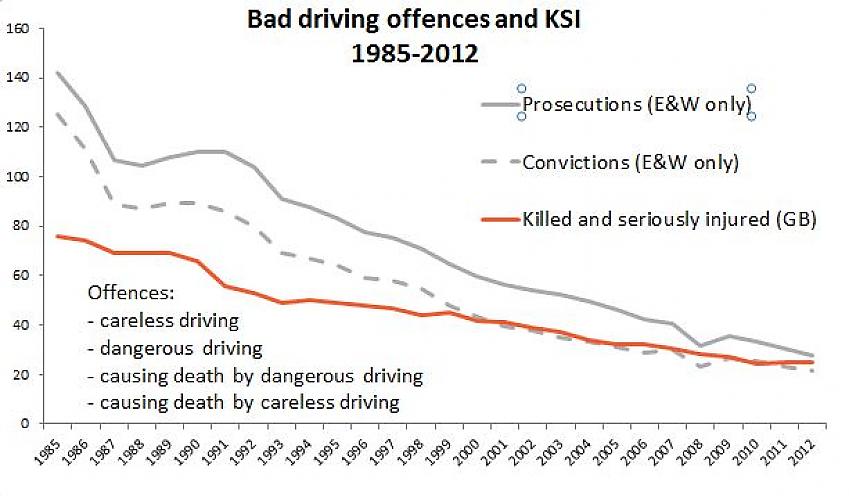 Since 1985, there has been a 77% drop in convictions in England and Wales for bad driving offences, despite only a 58% drop in killed and serious (KSI) injuries on Britain's roads

“Today’s report backs up what CTC’s Road Justice campaign has been saying about the need to improve the training of both police and CPS staff involved in road crashes. However, the CPS watchdog is repeating the legal system’s persistent failure to recognise that, in law, driving which causes obviously foreseeable danger should be charged as ‘dangerous’ driving, not ignored or dismissed as mere ‘carelessness’.”

The report comes as CTC’s Cyclists’ Defence Fund (CDF) prepares to decide whether further action is needed to secure justice for the bereaved family of Michael Mason, the 70-year-old cyclist killed after being hit from behind by a car on Regent Street. Although the driver admitted at inquest that she could not explain her failure to see Mason when he was directly in front of her, the Police have so far declined even to refer the file to the CPS.

With CDF’s backing, CTC Ambassador Martin Porter QC has written to the Metropolitan Police and the CPS on behalf of Mason’s family, urging them to reconsider. However, CDF has launched a £30,000 'Justice for Michael' funding appeal in anticipation of the need for further legal action, including the possibility of a private prosecution for causing death by dangerous driving.

Since the introduction of a new offence of causing death by careless driving (CDCD), prosecutions and convictions for the more serious offence of causing death by dangerous driving have nose-dived. By 2011, just 6.5% of road deaths resulted in a driver being convicted for causing death by dangerous driving. It seems hard to believe that the other cases were either not prosecuted as this would not be in the public interest, or resulted either from the deceased person’s own negligence, or from acts of God, or from mere ‘carelessness’. 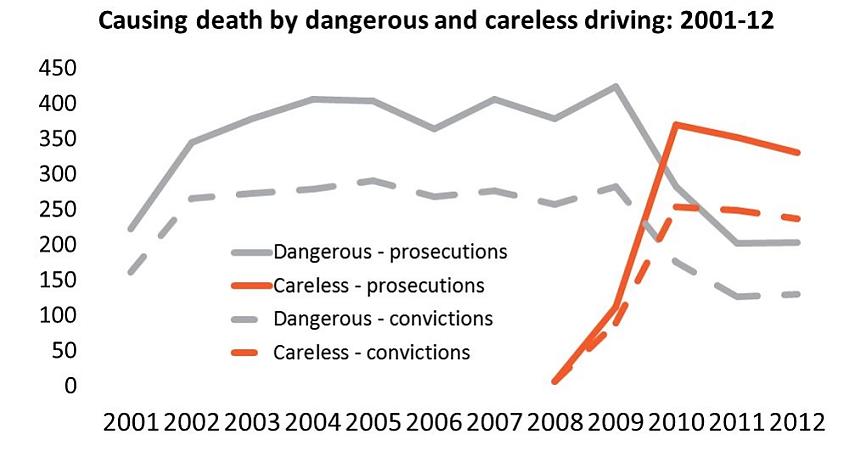 Time to end the distinction

Time to end the distinction between "Careless" and "Dangerous". "Causing death by driving" should be sufficient and it leave it up to the court to assess culpability.