Brighton's Old Shoreham Road: the cycle-ways to the future?

Brighton's Old Shoreham Road: the cycle-ways to the future?

Innovative cycle lanes with a degree of separation from the road have been introduced on Old Shoreham Road in Brighton. While not perfect, these new lanes are about the best that can be done under current highway design regulations.

The new lanes are designed to give a degree of separation from motor vehicles, without completely sacrificing priority over side-roads or at major junctions. The width varies from around 1.5m to over 2m wide, with most of the space for the lanes having been taken from the carriageway. At junctions with the main roads cycles have a 5 second headstart traffic light.

The lanes were officially opened by the Minister for Cycling (and local transport) Norman Baker MP on the 18th June. Funding for the scheme came in part from £100,000 courtesy of Legal & General and Links to School funding through Sustrans.

The design of the new lanes is similar to that found in Denmark - there the typical approach is to merge cycle lanes back into the main carriageway on the approach to a junction. In the image below, for instance a 2.5m wide cycle lane runs alongside a major road in Odense, Denmark. The approach to the junction is marked as a shared cycle/right turning lane, but beyond the junction the cycle lane continues, raised slightly above the level of the carriageway. 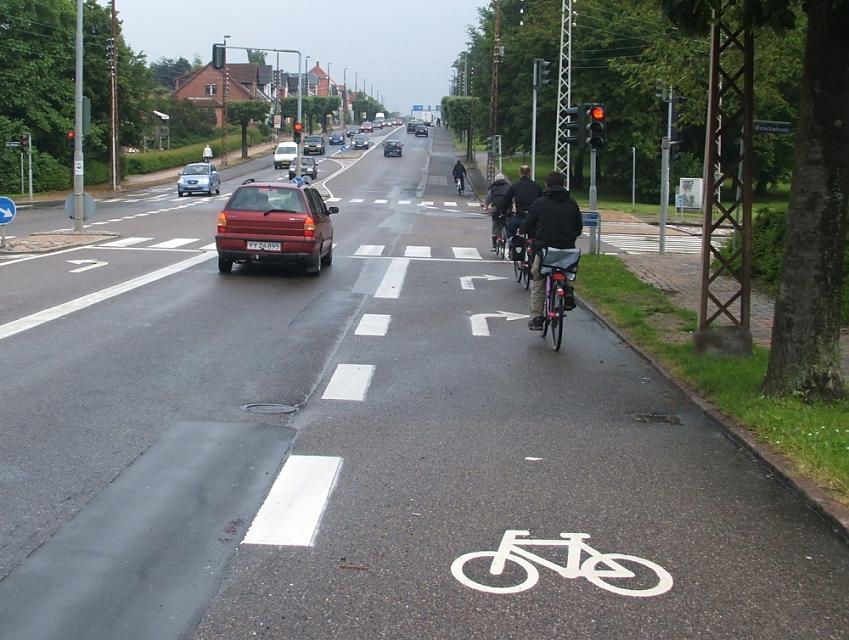 Although priority for cyclists  over traffic emerging from side-roads is clear, it is slightly ambiguous as to whether they also have priority over motor traffic turning off the main road and crossing the cycle lane, since no double dashed 'yield' lines have been marked.

Where the road passes over a railway bridge it narrows significantly. Here the route is somewhat compromised  - wide dedicated cycle lanes give way to a narrower, shared-use path.

Overall, though, the scheme shows what can be done, even under current regulations. CTC wants the Department for Transport to make it easier to provide priority over side-turning traffic and make cycle-specific signals at major junctions simpler to install. With better, clearer guidance and stronger regulations, more schemes like this one will become easier and cheaper to implement elsewhere in the country.

Images showing the lanes under construction can be downloaded below (courtesy Becky Reynolds, Bricycles and CTC campaigner for Brighton)

Side road partial priority - will drivers give way?

At the railway bridge the wide lanes give way to narrow, shared-use lanes