Lyme Disease, you may have heard of it, but what do you know of it? Is it relevant to cyclists? “Yes, most definitely.” as Cycling UK is told by Lyme Disease Action (LDA), the national charity set up to provide accurate information about ticks and Lyme disease.

Basics first. Lyme disease is an infectious disease caused by a bacterium called Borrelia burgdorferi and transmitted to humans by the bite of an infected tick. The bacterium was identified in the 1980s following an outbreak of apparent rheumatoid arthritis in a town called Old Lyme in Connecticut, USA - the disease was therefore called Lyme arthritis. However further research determined that the Borrelia bacteria were responsible for a similar disease which had been known in Europe for a century under different names.

Although in the USA, the disease causes a lot of arthritis, in Europe the more varied set of Lyme disease Borrelia cause more neurological symptoms. We have different ticks in Europe, too, although they do the same job of passing on the bacteria.

If you look at a tick closely you can see that it has hooks on its front legs, and these enable the tick to hitch a ride on a passing animal or person. The tick will take a bit of time to find a place with a good blood supply and then pierce the skin with barbed mouthparts. This does not hurt a bit - unlike a mosquito bite – meaning unless you check you will probably be unaware that the tick is there. 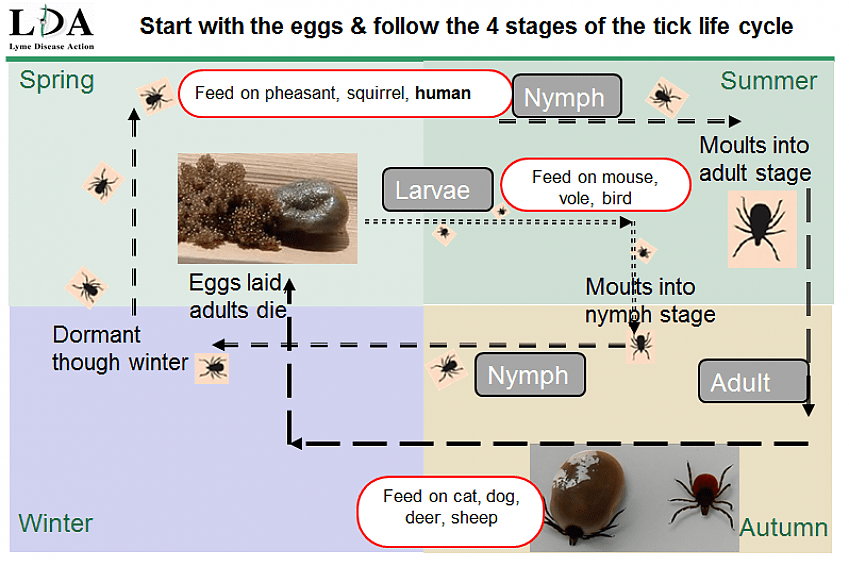 The tick will inject an anaesthetic and also an anticoagulant to help blood flow freely, and a few hours later, the Lyme disease bacteria will gear themselves into the right state to cause disease. They then migrate to the salivary glands of the tick and into you. Therefore removing the tick as early as possible can significantly reduce the risk of catching Lyme disease.

That is, of course, if that particular tick is carrying Lyme disease, which it may not be. Lyme disease is not so common in the UK as in mainland Europe. Surveys have shown on average about 6% of UK ticks carry Lyme disease - it varies from zero in some places to about 15% in others.

Where are you at risk?

Ticks cannot cope with drying out, so they prefer areas that are shady and damp. They can remain protected in shady woods, heaths and long grassland. They have been found even in short grassland on the edge of shady carparks and picnic spots where you might be sitting on the ground changing your shoes or eating your sandwich!

On a hot dry day they are likely to be hiding close to the ground but on a damp day, or in a shady spot they may be waiting for you - “questing” - on the edge of a grass blade with their front legs extended. Cold weather makes them dormant, but the temperature only has to rise above 7 deg C for them to be active. 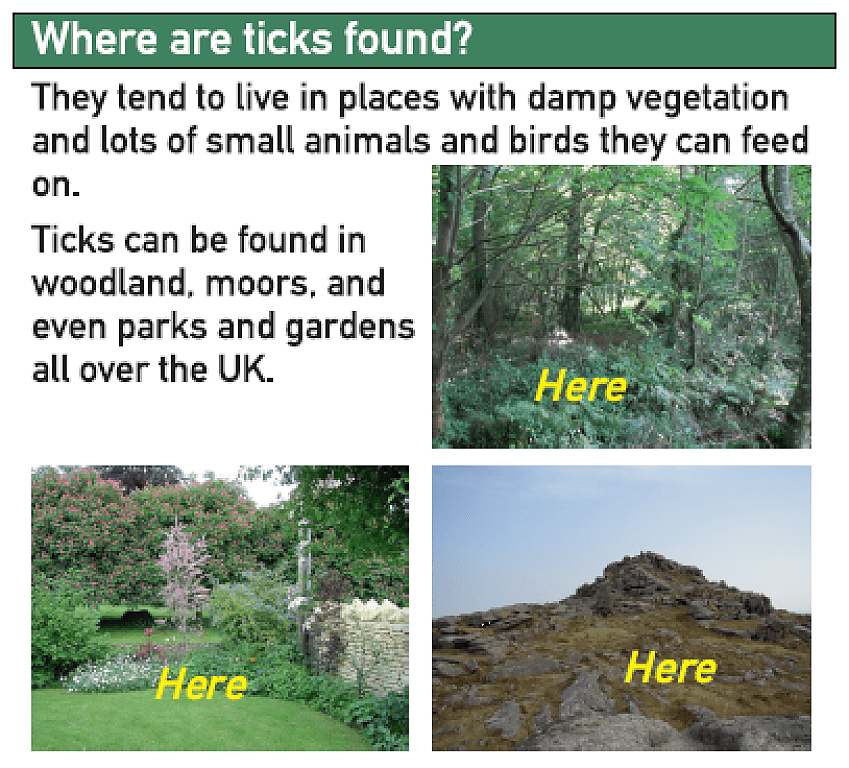 After being outside, brush down your clothing to remove any unattached ticks. When you change or shower, check your skin. Pay particular attention to moist areas like the groin and behind the knee, and on the hairline of young children, but check everywhere.

Running your hands over your skin you may feel something like a small scab; if you can rock it back and forwards, look at it closely or get a friend to check if it is out of sight.

Don’t pull it off with fingernails! This risks crushing the tick and possibly pumping gut contents into you. Equip yourself with a proper tick remover and take it off without squashing it. The barbed mouthparts hold the tick firmly in, so you will feel considerable resistance.

Kill the tick by crushing it between 2 pieces of paper and flushing it down the toilet, or by folding it in a strip of sticky tape and placing it in the waste.

Then watch and wait to see if you get ill! The odds are very much in your favour as most ticks are not infected so there is no point in having antibiotics straight after a bite. The bite itself will stay red for a few days (as with a splinter), but this is nothing to worry about. Watch for any symptoms over the next few weeks, in particular a red expanding rash which may clear in the middle as it grows outwards. Be aware that the Lyme disease rash is not always exactly at the site of the bite. 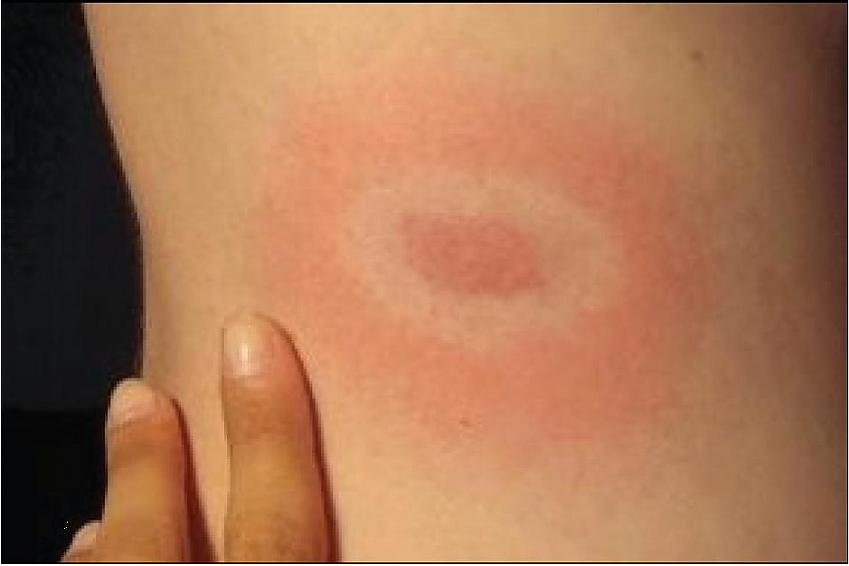 If any 'flu like symptoms appear, or any other sign of illness, then go to your doctor and tell about the tick bite. Appearance of a spreading rash means you have Lyme disease and need treating without waiting for a blood test, but your GP may not know this, so refer him or her to our website if necessary where there is information from official sources.

The average time for symptoms to appear is about 10 days, but it can be sooner or later. Untreated Lyme disease can cause very debilitating symptoms affecting many parts of the body including the nervous system and you do not want this to happen! Awareness is the key to avoiding complications.

Early treatment with antibiotics is extremely successful, but LDA has an email support line if you are worried. The charity also has leaflets, posters and an FAQ section which you can download from the website.

This article was written by Lyme Disease Action for Cycling UK.

***Update***
Since this article has gone live, Cycling UK has been informed widespread advice in the US is to "shave your legs" as the lack of hair makes it more difficult for ticks to hold on - just in case cyclists needed another excuse to shave their legs...