Predicting weather seems to be a fairly exact science most of the time. Predicting rider numbers turning out on the Sunday before a bank holiday Monday has still got a long way to go. Today we were  Alan P, Sue D,  Alex K (leader) and Oscar F who came for the first time. Some drizzling rain, a bit of headwind and the occasional motorist trying to break the land speed record upon seeing our group in a line could not deter us from the task of enjoying a great day out. Whether you love or hate the 'fragrance of the rape', that bright buttery yellow carpeting the fields is stunning. The early afternoon sunshine added  all the richness of the greens and browns to the buttery yellow , so even though our route in the morning along that well used bit of bitumen  from Upminster - Bulphan - Laindon- Little Burstead- Ingatestone-Mill Green was  a bit grey, the afternoon was a feast of colour.
47 miles on the clock at day's end and Oscar picked up a £5 note lying the road near Little Burstead waiting for a new owner. 'Beginner's luck' strikes again!
Only downside was we were too late to meet up with the SEG at the Baker's Arms, arriving 1 hr late. Sorry lads but l underestimated how long it would take, and  looking for more £5 notes took longer than it should!
Alex Kornfeld

At 9am 4 havering riders set off from Upminster. Alan, Ray new ctc member Dave Gregory and Oscar our newly joined rider  for what was hoping to be pleasant ride (all be it hilly) in the country side. So off the intrepid four went, up wigley bush lane past south weald onto noak hill and into stapleford abbotts at quite brisk pace with hardly any wind and clearing skys..bournbridge lane (or panters hill as some call it) was tackled with much more ease than expected.so of we rode through lambourne end and onto chigwell row..turning right and up pudding Lane ( no not that one where the great fire of london started for you history buffs) its just a hill..and on to abridge cafe for a well deserved rest coffee break and gentlemans chat .home ward journey was rode through bright sunny weather and wonderfull countryside as we flew past abridge airfield back up to stapleford abbotts and up tysea hill onto coxley green then homeward bound to upminster.. total milage from upminster and back approx 37 miles All done at an average pace of 12.6 mph which considering was a lot of uphill riding was not bad at all.

10th May 2015 Dot Sharp Memorial 80k (not a Havering ride, but run by CTC and attended by Havering members)

Just back from my first Dot Sharp Memorial 80k and it was a wonderful event. Gerald just beat me through the gate on arrival while Gordon, Alex and Chan turned up in the last moments before the start, but seemed to be making their way into the village hall while the rest of us were heading out of the gate to start the ride.

I set off with Ivan and Vic with a target pace of ~15 MPH overall. We picked up a few extra bodies along the way so I guess the guys were taking turns at the front of the peloton while I acted as pathfinder and pace setter out at the front. A bit of a tailwind had us flying for a significant part of the loop out from Mountnessing and even heading back south we seemed to be doing quite well, reaching the park in Writtle with an average of 17 MPH to show for our efforts. Here caution took precedence over heroics, so we slowed down as a mark of consideration to other park users. Leaving the park we started to feel the effects of the south westerly wind, but with completion by 13:00 well within sight we pressed on, finishing the course at 12:50 with an average speed of 16 MPH overall for 53 miles (including a small road closed detour)..

We checked in with Adrian and received our certificates and then headed to the kitchen for well deserved tea and biscuits. Other than the wind, which really wasn't a problem, we had glorious sunshine and temperatures pretty much perfect for whizzing around the countryside. The route itself was top notch and I look forward to repeating the experience next year. This would make a great Havering ride for those who couldn't make it today (and for those who could).

Chan, Dick, John W, Ray, Dave and new rider Peter made the numbers up to six on a lovely sunny day.
We took our usual escape route via The Nag Z and S Weald.
Ignoring the delights of Blackmore we pushed on to "The Hanging Gardens" tea rooms at Little Oxney Green.
Service was friendly and fast, one opted for beans on toast and the size of the serving would have fed all six of us!
Peter headed home and the rest set off along NCN route 1 through Chelmsford and then back on the road in Hammonds Road.
Off to Little Baddow via the ford then a little downhill to Paper Mill Lock.
As expected on such a nice day it was packed at "The Old Stables" tea rooms but the service was rapid and we were soon tucking in.
After a good chinwag we set off, John left in search of more miles while the rest ground our way up North Hill. Return was via Danbury, Sandon and Stock then a whistle stop after Buttsbury Wash. Hutton, Warley and home!

A disappointing turnout for the fast ride today, with only the ride leader up for it. So I went on mw own anyway. After a short delay in the hope that latecomers might join the fast ride I was off at 09:10 to make the coffee stop at Bretts Farm in White Roding. The route was a classic, heading up through Blackmore, Norton Heath and Willingale before completing the 22 miles and stopping for coffee at 10:30. A delicious latte and a brief pause for breath and by 10:45 I was on the road again to put in a 25 mile loop, heading east via High Easter, Pleshey and Howe Street before turning north and then back west via High Roding to lunch at the Cock Inn. Being on my own I made good time (18 MPH average) and arrived just after 12:00, catching just a few droplets of rain before a semi-downpour hit.

The rest of the Havering members turned up around an hour later,so we sat and chatted while they took their turn for lunch and then I joined them for a more leisurely return to Upminster via Matching Green, Moreton, Bobbingworth and Toot Hill. A few people had turned back earlier in the day (Kelvin Dane, Gordon Peel, David ?) and Gerald Howgate split from the group after lunch, so the return leg was completed by myself, Dave Rowlands (ride leader), Alex Kornfeld, Alan Pine, Chan Kwan, James and Reg.

My total mileage for the day was 73 miles, falling just short of plan due to the revised route back home.

Eleven set off on a fine spring morning. Wigley Bush Lane warmed us up then at Vincent's Hamlet the P------e Fairy struck, Dave (the other Dave that is) limped back home along with Dick.
The group split but we all met at Blackmore where Kelvin left us.
With the Fete getting under way the village was heaving but the tea rooms was quiet so we soaked up the sun along with our caffeine!
At Norton Heath Gordon turned back and the magnificent seven pressed on through Willingale and Abbess Roding. Here the rain started, not enough to warrant a jacket though.
Soon we reached our target, "The Cock" where we met Tim (he'd taken a longer, faster route).
After lunch Gerald made his own way back to E17 while the rest headed for Matching and Moreton, Toot Hill and Stanford Rivers where we split, Alex, Reg (on his recently purchased Tiffosi) and Tim for Upminster, Alan, Chan, James and Dave for Romford and Dagenham.
55 miles covered.

The ride to Margaretting Tye (M T) set out with 5 riders Gordon (P) Chan (K) Tim (D) Oscar(F) AND Alex(K).
The grey sky with it's threat of rain did not put us off our stride. Today it was going to be hills, miles and stamina building come what may.
Within 15 minutes of setting off Tim's chain and cassette were not talking to each other, forcing his retiring for the day.
Then came the rain and my resolve, previously steadfast and unshakeable, started to dissolve in the wet.
The first thing to go was our coffee break venue. Lake Meadow was infinitely more attractive being 30-45 minutes closer, and Margaretting Tye was just down the road. It was win-win because with testosterone levels at unrecordably low levels  the focus changed to enjoying the wonderful gardens and meadows around Stock and our banter about 'if only l.....'
From  M T and our lunch al fresco, it was to Blackmore and  the rain kept the roads fairly clear of any traffic and the gardens all around were at their best...in full bloom. That was treat.
About 40 miles covered today in the time it takes to travel 40 yards along the A12 in rush hour.
It has been a great day and we all finished on a high. 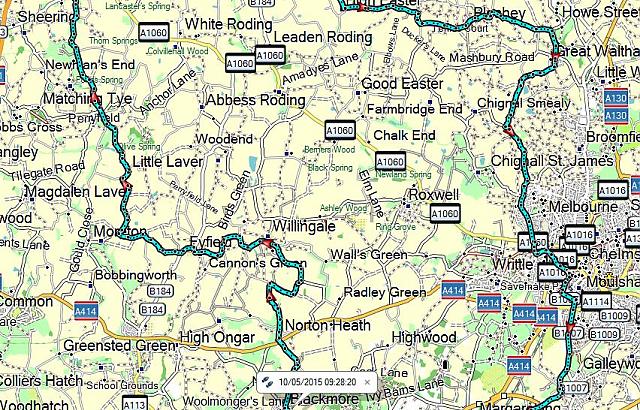 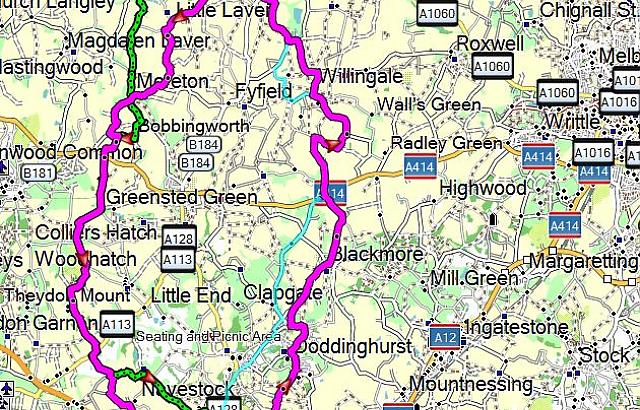