Following on from a request for a return to the Lincolnshire Wolds, a route was devised that would take in an ascent to the ‘Bluestone Heath Road’ and the ‘High Street’, both ancient droving roads running across the famous chalk hills.

With a good deal of climbing, Ride Leader Tim Newbery was wondering how many would turn up at the Meridian Leisure Centre in Louth. The weather gods would at least be on our side as it was forecast to be a dry day with plenty of morning sunshine. The downside, a chilly, brisk northerly wind. Tim was never the less surprised and pleased to find that we would need two ‘mini’ groups with a turnout of eight. Joining Tim were John Rickett, John Ambler, Alan Hockham, Jason Bartup (good to have Jason out with the group again), Chris Owen, Reg Bagshaw and Rob Cook.

Leaving a little after schedule, the route would take us to Hallington, Withcall and a steady but persistent climb to meet up with the Bluestone Heath Road. The sun did at last brighten up our morning and we noted a number of birds of prey on the lookout for a tasty morsel. For the group, we had hoped for refreshments at Jenny Ward’s shop in Donnington-on-Bain and with Jason and John Rickett having taken the lead, they arrived first. Jason very kindly took orders for teas and coffees whilst John distributed chocolate Hobnob biscuits. A man with taste!

After friendly chat and banter, it was at this point that the two ‘mini’ groups would take alternative routes. Chris, Rob and Reg would take a more direct route to Kelstern whilst Tim, Jason, Alan and both Johns would continue to Ludford first.

“Rob, Chris and Reg left the group at Donnington, finishing their beverages, to head for the bigger of the hills leading up to the Bluestone Heath Road. This would be a test for Reg and not one he was looking forward to. At the young -old age of 80 something, both Rob and Chris marveled at his ability as he managed the climb.

After a longish while the three arrived at the top, turning left to make for Kelstern, where Chris would end his ride to return by car to Cleethorpes. Against a moderate headwind and in bright sunlight, Calcethorpe then Kestern was reached and a decision on routes back to Louth. Reg felt fine so it was decided to head towards Ludborough, the headwind thus avoided further. Just before continuing on to Ludborough on the newly improved Barton Street a right turn took them via North Ormsby to Utterby. Rob at this point suddenly realised the packed lunch he had prepared earlier had been left on the kitchen table together with his backpack! As he mused upon the fact that it had taken him over 2 hours to realise he was not wearing his customary backpack, he noticed that the temperature felt at least 5 degrees warmer. This was accounted for by the fact that the pair now had a backwind and full sun at a lower elevation. All was good with the world as they chatted along winding lanes back via Brackenborough Road and the environs of little old Louth. According to Reg's clock some 28 miles had been covered during the morning and enough climbs to last him, at least until next Sunday.

Lots of cyclists inhabited the roads today. The bright and cheerful weather and autumnal tones of country lanes making cycling a real privilege”.

For the remainder, an alternative climb up to the ‘High Street’ and a straightforward routing to Ludford Parva, riding alongside the remains of former RAF Ludford Magna. There’s not much to see nowadays but the airfield had a long history having been operated by RAF Bomber Command equipped with Lancaster squadrons during the Second World War, and throughout the Cold War being the base for PGM-17 Thor intermediate range ballistic missiles. It’s been at least a year since the club has visited the Viking Way Coffee House at Luford, so it was nice to return once again. This time outside seating only but the bacon and egg baps went down well with John Ambler rating the bacon bap a ‘nine out of ten’. Praise indeed.

Refreshed, time to take in the sights of the Lincolnshire Wolds as we made our way along the ‘undulations’ to Kelstern Memorial. Northbound now and into an increasingly fresh headwind, through Swinhope Brats and Click’em Wood before turning east to Wold Newton. A short stop for a drink at the entrance to ‘The Valley’ before continuing to the junction with Salters Lane. Here we met up with a group of cyclists led by Flora Forster, who was club secretary for a number of years. Great to see her again and looking fit and youthful. She had run a marathon only last week.

With the wind firmly on our backs we made a pleasant descent to North Ormsby, noting the now familiar lumps and bumps of the deserted medieval village, this time Jason taking advantage of the ‘cyclist’s bench’ that Tim and Barry like to use for their coffee and jam sandwiches!

Next to St Andrew's Church Utterby we stopped briefly at the Packhorse Bridge. One of only three remaining in Lincolnshire the bridge was built in the early 1300’s not only as part of the salt way trade route but also to allow access to the church for the nearby North Ormsby Priory.

Members departed to make their own way back to respective homes but for the Louth contingent a very fine 39 miles were accomplished with over 1200t FT of climbing. Many thanks to all and glad that everyone enjoyed the day in fine, if blustery Autumnal conditions.

Thanks too to Rob for the report and good to see Jason again. 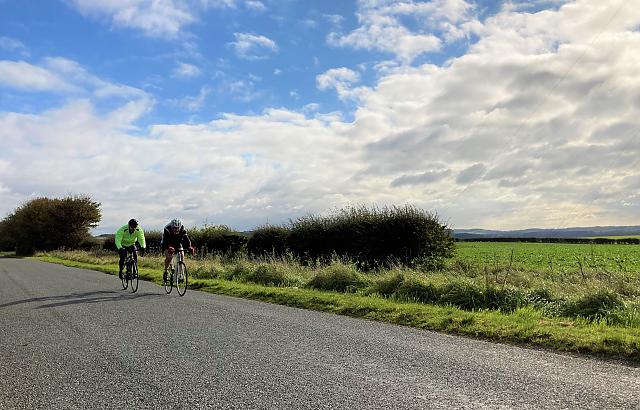 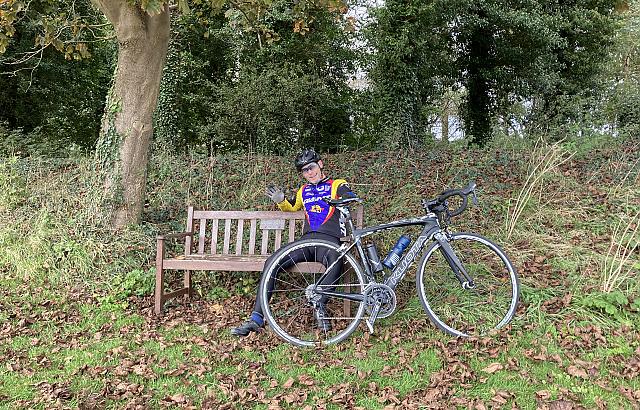 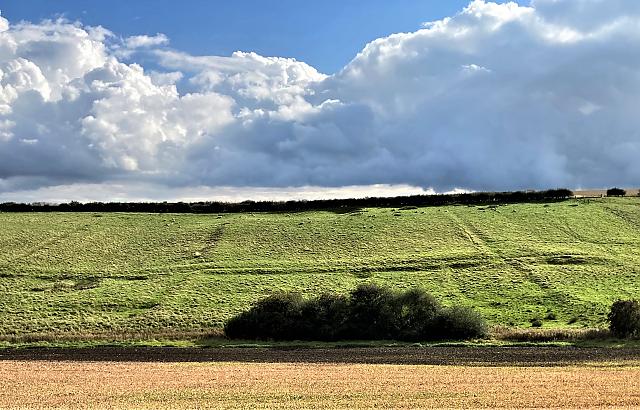 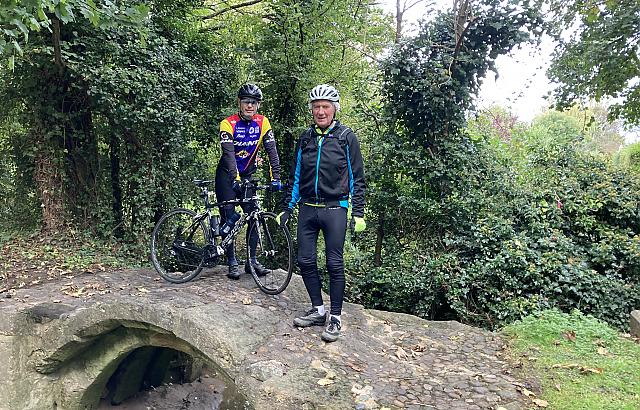 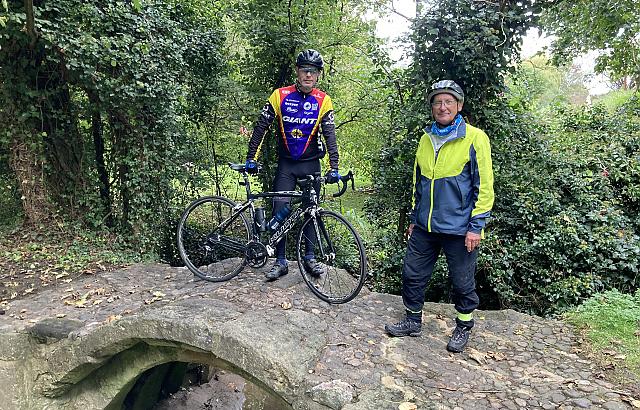