Jo and Dave cycle from Berwick-on-Tweed to Hexham

With new bikepacking kit to try and a few days to spare, Jo Gibson and her partner Dave tackled the Sandstone Way in March.

The Sandstone Way is a new off-road trail through an ancient landscape. It was established in 2015, the brainchild of Cycling UK member Ted Liddle, and it meanders across 120 miles of Northumberland landscape and a few thousand years of its history. With some time to spare last March, Dave and I decided to ride it from north to south, Berwick-upon-Tweed to Hexham.

Day one of the trip proper, however, found us in the Crown and Anchor on Holy Island, which isn’t part of the Sandstone Way but is only a short diversion from Berwick. We had risen at 05:45 and waited shivering above the harbour so we could watch the sun rise in the company of fishermen and wheeling gulls. Fierce rays pierced the horizon, bleeding red across the black sea.

After breakfast, I was conscious of our luggage stuffed into dry-sacks, ready to be lashed to our bikes. But the fire was roaring and I was reluctant to move. Except time and tide don’t wait for you forever on Holy Island. So we said our goodbyes and pedalled back across the causeway to the mainland.

Once we crossed the A1, we gladly left the great tarmac artery for tracks covered with grass, mud and sheep dung. Strangers to Northumberland and to bikepacking, we were plunging deep into both. While it had been satisfying to strap my gear to my bike, knowing I was self-contained and self-sufficient, I quickly became irked when my tyres flung up filth from the field and my fresh, portable world became soiled. I met each muddy field crossing with a sigh.

The day passed rhythmically, my head ducked against the crosswind, popping up only to spot a sandstone crag in Kyloe Woods and the outcrop of St Cuthbert’s cave. But mindful of the time, the light, and the dark clouds burgeoning above, we rolled along the fire roads and dusty singletrack while the rolling was good. When we found ourselves following a sandstone ridge and grinding up a deserted back road climb, I secretly relished the tarmac and I felt guiltier and happier when it turned downhill.

Freewheeling, we missed a turn. Upon retracing, we found a ferociously rutted Jeep track, with ridges coated in mud like melted chocolate. The extra weight made my twitchy carbon race bike utterly unpredictable. Dave, with his almost-as-twitchy Cube Reaction, was not faring much better. Pedal, wobble, shove, repeat: bikepacking at its most dynamic.

The market town of Wooler was our first real taste of civilisation since we left Holy Island. We bolted into the Terrace Café, desperate for sugar and warmth.

We could have taken a diversion then, heading out of town to the west and into the National Park on an unmarked trail. But with over 10 miles to Ingram and no idea what terrain awaited, we saddled up and pedalled south on the main trail. 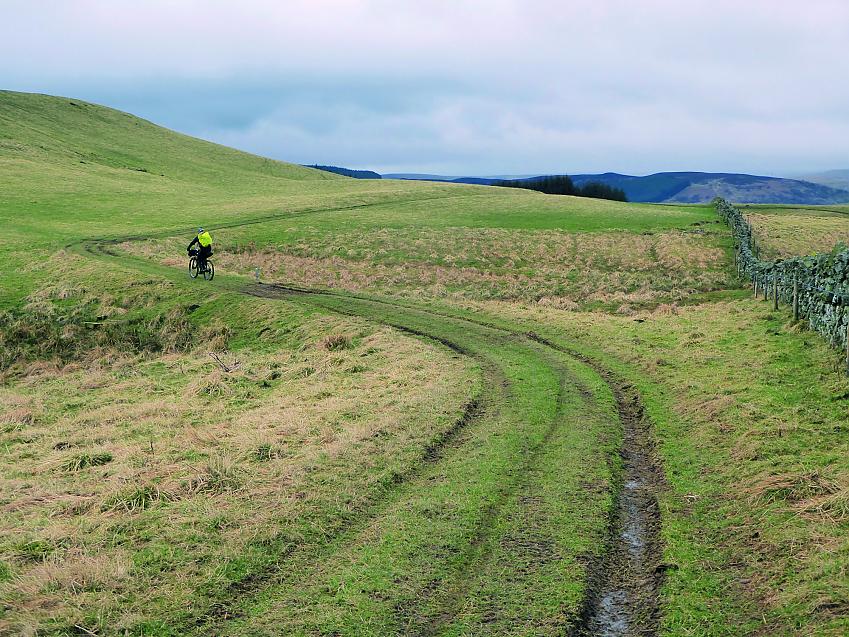 Ingram House, part of a hamlet beside the River Breamish, is large and a little intimidating in its grandeur. Detaching bikepacking bags from bikes encrusted with countryside is not a slick operation. I sweated outside the back porch, wrestling with Velcro fastenings. Shoe-less we tiptoed, beneath glowering ancestors, up a grand staircase and into a room with a duvet so thick I could become submerged in it.

...aware of my crumpled clothes, I felt keenly the limits of bikepacking when it came to dressing for dinner.

Later that evening, Kinloch mousse, pheasant roulade, and chocolate terrine were served up by hosts Jane and Adrian, and were washed down with Côtes Du Rhône. It was delicious but, aware of my crumpled clothes, I felt keenly the limits of bikepacking when it came to dressing for dinner.

Mist hung thick over Ingram on Wednesday morning, hiding the Breamish Valley. While serving a big breakfast, our hosts brought us up-to-date with the endurance mountain bike events in the area (the Clennel Colossus and the Breamish Behemoth) and shared stories of previous guests (cyclists and even a horse rider). Eventually, setting out into the mist, we were soon wheel-spinning on singletrack coated in treacle-gloop, both of us fighting our way to the top of Wether Hill so we could enjoy the rocky descent.

The route undulated, swapping between field, track, and deserted back road until we came upon a gentle climb onto artillery-scattered moorland. When we could go no further, we stopped to look out through a frame of blackened trees from a platform of ancient standing stones. The town of Rothbury, built into the sandstone hillside, lay clustered below, and beyond it loomed the ridgeline of Simonside. Cake was calling and so we plunged downwards towards the town, losing height quickly on steep singletrack switchbacks.

At the Sun Kitchen, we moved aside our plates of cake crumbs and spread our map across the gingham tablecloth. Shortly afterwards, struggling to pedal the five-mile fire road ascent into the Simonside Hills, the stodgy Bakewell left an aftertaste of regret. At the top, I took a break, looking out across Coquetdale, whereupon Dave pointed out the horseshoe-shaped ridge we had ridden earlier that morning.

Harwood Forest stretched ahead – mossy, dark and deep where the trees grew, but desolate where great swathes had been felled. We sped through it on well-tended fire-roads. Even more desolate was the scaffold of Winter’s Gibbett at the end, a replica of the frame from which the hanged body of murderer William Winter was left to rot over 200 years ago. Folklore has him walking those bleak hills to this day. But if I felt a chill, it was nothing more than the cold March wind.

Brandy Bank Guesthouse at West Woodburn was once a staging inn. After our long day, nearly 50 miles and over 4,000 feet of ascent, I fancied us rolling up on carbon horses, and being tended like highwaymen while our bikes were stabled in the tea room.

That evening, it was easy to forget the discomfort on the Simonside Hills as I tucked into pie, chasing it with Merlot and complimentary plum crumble. And while we relaxed, our kind host washed our dirty clothes and left hot water bottles in our beds.

The last leg of the journey to Hexham would be easy, we said. Done by lunchtime, we said. It was nearly 20 miles shorter than the day before. But when our average speed plummeted due to (more) mud-slicked fields, I found I was battling the terrain on the outside and 48 hours of rich dining on the inside. Meanwhile, Dave had other worries, struggling with a cycling top that was a few sizes smaller after an intense overnight tumble-drying session.

From Bellingham, we pedalled across more fields and encountered our first sheep-jam, being driven between two high banks by a farmer and a pack of collies. ‘He’s retired himself,’ the farmer called, seeing Dave photographing a well-worn collie. "He sleeps in the house now, in the front room. If it’s raining in the morning, he just stays there."

I made notes for my own retirement, then we carried on towards Houxty Burn where I got photographs of Dave ankle deep in the cold water after a heroic water-crossing attempt. Job done, I wheel-spun through mud to the footbridge.

Between climbs that stretched as far as the eye could see, and after further travails across boggy grassland, we crossed Hadrian’s Wall. Tired as we were, we still had time to stop and ask passing tourists to snap us beside a preserved stretch of wall.

Arriving at Newbrough, Hexham was only a few flat road miles away, and part of me desperately wanted to take them. But the map said there was one last off-road climb onto the top of Warden Hill, so that was what we did. Below the treeline, just before the top of a rocky track, I stopped to catch my breath. Looking behind me, the landscape had been transformed. The clouds that had dogged our days had finally parted. The South Tyne stood out as a glittering ribbon, and either side of it the valley sides were glowing.

Enthused by the sun, we relished the final sections of swooping grass track, the rooftops of the town drawing us on, until we were among them and beside the final marker. Wow: we had made it!

There was only one thing we needed: a hosepipe. And with the same easy kindness that we had enjoyed from the beginning, we came across a construction worker who lent us a hose and bucket to erase the evidence of our journey, which was plastered wattle-and-daub-style to our bikes and shoes.

Later in the pub, ale soothing tired limbs, we agreed that the Sandstone Way in March had been more than we had bargained for. The people and the hospitality were splendid, but while there were no tricky technical sections on the main trail, the climbing, the heavy going, and our loaded bikes took everything we had to give each day. As the route leaflet says: ‘many mountain bikers underestimate the route.’ We did. But now, 12 months later, I’m thinking perhaps we should ditch the luggage and try to complete it in under 24 hours, the current record being just under 11. Perhaps this summer… 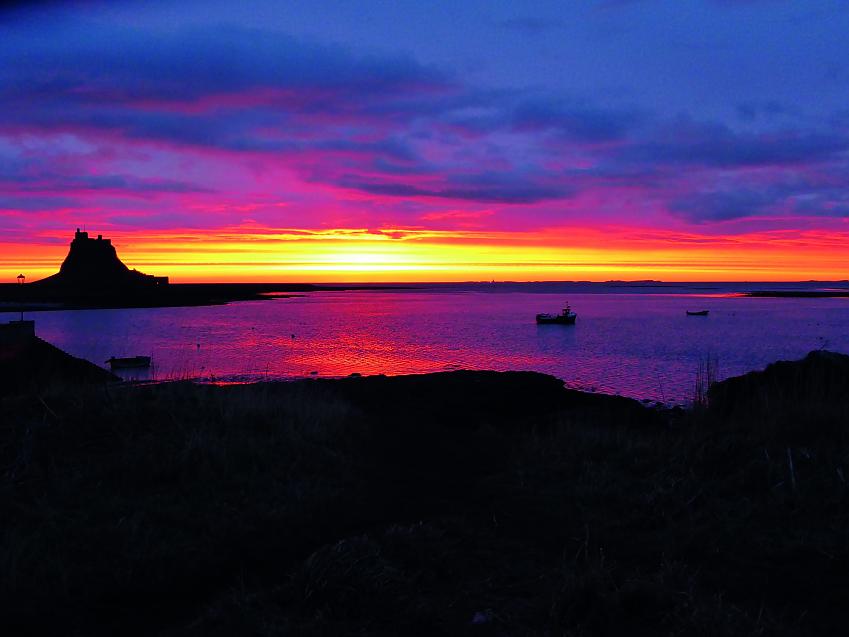 Route: From Tweedmouth Dock along coastal path and causeway to Holy Island. Cross country to Wooler and on to Ingram. Ingram to Rothbury and down to West Woodburn. West Woodburn to Bellingham, through Simonburn and on to Hexham.

Conditions: No rain but in March the ground was wet. Many boggy fields and much muddy double track. Some firm fire roads, quiet country lanes, and occasional singletrack. Most sections could be ridden with bikepacking bags.

Equipment: I rode a Felt Nine 3 mountain bike with Alpkit luggage and an Osprey 25L backpack.

I’m glad I had: The map – extra loops, alternative lines and shortcuts included. Next time I would set off in summer, explore the alternative trails or attempt to complete it in 24 hours.

Hexham and Berwick-upon-Tweed both have train stations. It usually takes less than two hours to travel between the two, with a change at Newcastle. Our planning revolved around breaking the ride into three main riding days and finding accommodation at suitable intervals on the route.

The Sandstone Way website suggests the route is suitable for families, and while it is not technical in MTB terms, this is a demanding ride for a moderately fit rider.

There are extra loops and more challenging lines veering further into the Northumberland National Park.

It’s suitable for a hardtail MTB.

Six great places to ride in Northumberland View
Cycling UK continues to support the UK to cycle
This remains true during this difficult period with the ongoing threat of coronavirus Covid-19
Read our latest advice on cycling
Join Cycling UK to help us change lives and communities through cycling
Membership gives you peace of mind insurance, discounts in cycle shops, rides & routes
Join now