Some cycle from Land’s End to John o’ Groats for charity or for a personal challenge. Cycling UK member Paul Lloyd did it purely for the joy of touring.

Land’s End was shrouded in mist and silent on this mid-May morning. Not a sound from the waves on the rocks below. No wind blowing over this exposed headland. I expected to look out into the expanse of the Atlantic before turning my back and heading east and north towards John o’ Groats. Instead, everything was veiled, a curtain drawn across my departure.

A film crew arrived as I was preparing to leave. They were shooting footage for a UK holiday website and asked if they could interview me and film me setting off. Their send-off kept me smiling for the next 10 miles back into Penzance.

People tackle this classic long-distance ride for different reasons. Many do it for charity. Some tackle it as a feat of endurance, to prove something to themselves. A few ride it against the clock. Whenever I was asked why I was doing it, as I travelled north, my standard answer was: ‘For fun – to enjoy the experience.’ I wasn’t trying to prove anything. It was an answer that often provoked puzzlement.

I wanted to savour the journey, which meant riding at a more leisurely pace. I was planning to camp each night, so I was carrying a lot more weight than the lightweight End-to-Enders I met. My pace would therefore be slower – between 50-60 miles each day. Yet having all I needed on the bike allowed maximum freedom and the opportunity to enjoy the landscape to the full, both on the bike and off it. Those things for me are the real joys of cycling touring.

On one level it’s easy: you start at one end – Land’s End or John o’ Groats – and finish at the other. But between those points there is endless scope to personalise your route. As far as practical, I avoided A roads and skirted around urban conurbations, although I still needed to ride through Bristol, Edinburgh and Inverness.

Stretches of Sustrans' National Cycle Network routes took me away from the madding crowds. Route 3 saw me through Cornwall and Devon. Route 68 (The Pennine Cycleway) enabled me to ride through the Midlands and the North, right up to Scotland, along the spine of the country and through several national parks. In Scotland, I used Routes 7 and 1. But I didn’t stick to Sustrans routes religiously.

Lunchtime halts in pubs and inns en route were something to relish as they offered the opportunity for a pint of good ale and a sandwich in front of a log fire.

In total I covered 1,200 miles, a few hundred more than the most direct routes. It took me 15 days to reach Edinburgh, where I had a rest day. From there, it was another eight days to cycle up to the north-west corner of Scotland at Durness, then along the whole top coast to John o’ Groats.

I carried lots of maps to allow detailed route planning, posting them home in batches to lighten my load. In the south, I used 1:50k Landrangers as I had lots from earlier trips. Further north, I used Sustrans cycle maps for the Pennine route and through most of Scotland.

Many of the trip’s high points came on higher ground. Entering Scotland on the A68 from Northumbria over the Carter Bar pass (418m), I was treated to a stunning view across south east Scotland all the way down to the Firth of Forth. Unusual volcanic cone-shaped hills were dotted across the landscape. Edinburgh Castle was visible on its rock on the horizon, more than 40 miles to the north.

My memories of the Eden Valley in Cumbria, the Camel Trail between Bodmin and Wadebridge, and the route to Colne from Hebden Bridge over Widdop Moor remain fresh. When I rode across the Mendips in Somerset, I could see Bristol and, beyond that, the Bristol Channel and on to South Wales. The route from Perth to Inverness (on Sustrans NCR 77 and 7) through the Cairngorms in bright, sunny weather was a delight. Much of this route is off-road or on quiet lanes, away from the busy A7 trunk road. It’s one of the nicest Sustrans routes I’ve ridden.

Cycling in near silence, I could watch and hear the wildlife – especially birds such as curlews and lapwings.

North Yorkshire, Cumbria, Northumbria, and Scotland offered remote roads that put me closer to nature. Cycling alone in near silence, I could watch and hear the wildlife – especially birds such as curlews and lapwings, yellowhammers and chaffinches, goldfinches and wrens, even a pair of golden eagles in the far north.

The main bridge crossings are always enjoyable by bike, marking as they do transition points from one shore to the next, and sometimes one country to the next. Often you are the only person using the bike and pedestrian lane, feeling the thrumming vibration of passing vehicles. So it was when I crossed the Bristol Channel beside the M48, the Forth Road Bridge, and the Kessock Bridge from Inverness across the Morray Firth/Beaully Firth. Being able to look down into the shimmering water way below – or up to the towering structure of the bridge itself – gave a real sense of scale.

There were few low points in the whole trip. I had no major mechanical issues with the bike, not even a puncture – just a replacement tyre and a few adjustments to my gears in Edinburgh after clocking-up 800 miles. Nor were there any real difficulties with tiredness or exhaustion, helped no doubt by not pushing the pace too much each day.

The riding wasn’t especially difficult, although some of the hills in Cornwall and Devon and through West Yorkshire proved a challenge to both lungs and legs. Only once did I have to dismount and push the bike – up a 1-in-4 hill near Umberleigh in Devon.

For me the biggest frustrations were traffic-based. Cars, and especially those pulling caravans, sometimes overtook without allowing enough clearance. One of the least enjoyable stretches in that respect was riding through Avonmouth and the approach to the M48 Bridge along the A403; a constant flow of heavy lorries rumbled past. Turning right across the busy A38 near Taunton, trying to get on to the A361, was a bit hair-raising too.

Out in the elements

I was lucky with the weather: only six days of rain in 23. Riding in rain takes the edge off the cycle touring experience but in the UK you have to expect changeable weather. To escape strong winds and driving rain in the Yorkshire Dales and the Peak District, I booked overnight stays in youth hostels.

For May and June, it was unseasonably cool. Finding suitable places to get inside to warm up and dry out a bit when not cycling was therefore a priority. So pub and café visits were essential way -stops to recover and refuel. Lunchtime halts in pubs and inns en route were something to relish as they offered the opportunity for a pint of good ale and a sandwich in front of a log fire.

I would often stop for a second breakfast around 11am to recuperate, and an afternoon tea-break around 4pm to do the same. These pit-stops were often a good excuse to enjoy pubs, tea shops and local bakeries. Sampling local and regional food and drink specialities enriches the experience of moving from one county to the next, and from one country to the next. 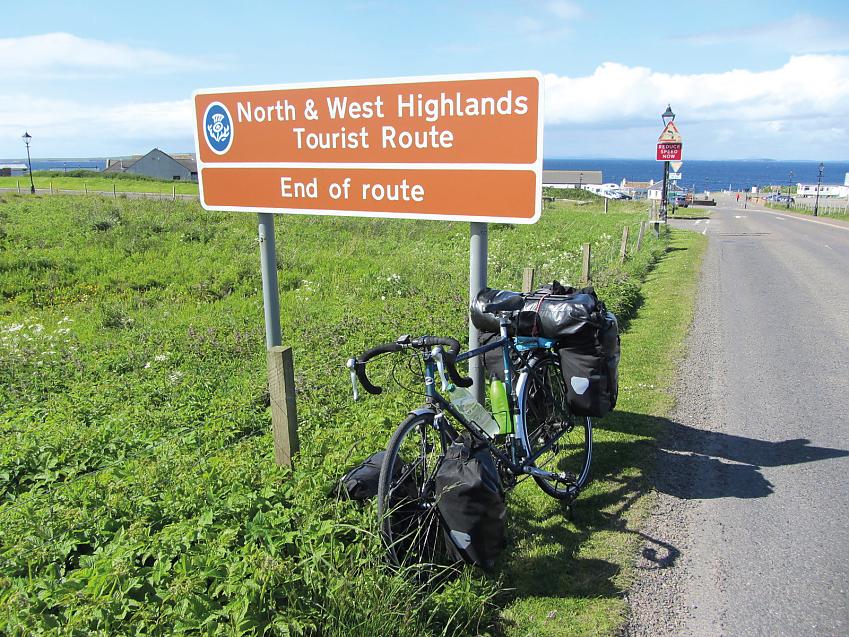 No end of camaraderie

Although I did this journey solo, it was one of the most sociable long-distance bike trips I have done. I kept meeting people riding the End-to-End or other long distance routes. Using Sustrans routes probably made it more likely I’d meet other cyclists like this.

I was surprised by how many people were travelling the same route at the same time, especially as I got close to my final destination. Sitting in the café near the harbour at John o’ Groats, having finished my ride, I was struck by the number of End-to-Enders starting or finishing their journeys near the iconic white signpost within the space of an hour. There must be hundreds
in transit End-to-Ending at any one time.

For the last 20 miles, I cycled alongside John, a sprightly 74-year-old from New Zealand whom I first met in Edinburgh and again in Tongue and Bettyhill. It turned out that we had left Land’s End on the same day! As we cycled the last leg from Thurso to John o’ Groats, bright sunshine illuminated the windswept Orkney Islands to the north. A strong tailwind pushed us on.

There are obvious convergence points along the way, even for those who are following different routes. I would wave to others with loaded touring bikes going in the opposite direction. Sometimes, on quieter roads in Scotland, we would stop and share experiences before heading off again. Occasionally I would pass others who were travelling End to End on foot. There was an instant camaraderie. All of us long-distance travellers had shared experiences, and we were all enjoying a quite incredible journey. 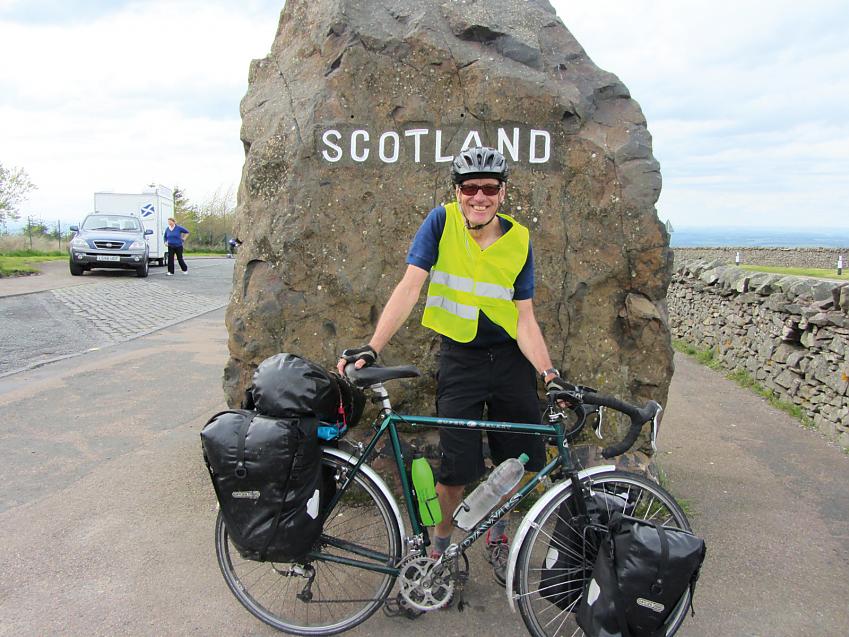 Accommodation: Mostly camping. Youth hostels when the weather was at its worst.

I’m glad I had: Cycling leggings, gloves, a hi-vis vest, and a flashing light attached to my helmet.

Next time I would: Try following a coastal route.

Further information: I took the The End to End Cycle Route guidebook by Nick Mitchell (Cicerone, 2014). It was really useful in Cornwall and for getting through Bristol. The new Sustrans guide, Land’s End to John o’ Groats on the National Cycle Network (reviewed in the last issue of Cycle) would be useful. And don’t forget there’s a whole section of the Cycling UK Forum dedicated to the End to End.

When you’re planning your own LEJOG route, the crucial question is what kind of cycle touring experience you want. If you’ve only got a week or two, your route is likely to be a more direct one up the western side of the country. If you’ve got time for a more leisurely cycle tour, then you can pretty much set any route you like, linking up whatever destinations you want en route. I found the Sustrans National Cycle Network Map really useful at the planning stage.

Cycling Land's End to John o' Groats? Get the End to End pack View
You too can champion cycling in the UK
Give your support today to help Cycling UK’s charitable work tomorrow. We double every pound you give through other sources to help change lives and communities through cycling.
Volunteer now
Cycling UK continues to support the UK to cycle
This remains true during this difficult period with the ongoing threat of coronavirus Covid-19
Read our latest advice on cycling
Join Cycling UK to help us change lives and communities through cycling
Membership gives you peace of mind insurance, discounts in cycle shops, rides & routes
Join now