Great Rides: Cyprus in the off season

Great Rides: Cyprus in the off season

There’s more to Cyprus than summer beaches. Cycling UK member Howard Ashton circled the island and then crossed the Troodos Mountains in February

Cycling has always come easier to me than walking. I was born with cerebral palsy, which impairs muscle coordination, and couldn’t walk unaided until I was eight years old. But I was riding a tricycle – my first was a bright red Gresham Flyer – from the age of three, and at nine I graduated to two wheels.

As a student, I used a bike to get about. It took a while before I had the confidence and competence to embark upon anything more than short excursions. My first tours had their trials and tribulations, but also joys. I visited the Faroes, then Lapland and Nordkapp, then Newfoundland, then Turkey and Greece… I’ve now explored more than 60 countries by bike. I particularly like journeys that keep me in close company with the sea, which is why I decided to explore Cyprus one February.

My idea – for I do not plan, or at least not in any detail – was to start from Paphos and make an anticlockwise circuit, visiting Cape Greco in the south east, Zafer Burnu on the tip of the island’s north-easterly ‘panhandle’, and Korucam Burnu, which sits at the end of the Kyrenia Mountains in the west. Then I’d head to Nicosia (Lefkosia) and cross the Troodos Massif on my way back to Paphos.

This last stage of the journey was the toughest. I woke to bright blue skies, but squalls of rain weren’t far away. I climbed gently through the suburbs, breaking out into the countryside at Lakatamia, where the view to the south was filled by the snow-streaked bulk of the mountains. My attention, however, was drawn to the threateningly dark sky in the west…

As the rainstorm drew closer, I began to look for shelter as I rode. I spotted a massive villa, still under construction, and found an outhouse with a badly-fitting metal roof. A child’s plastic trike provided me with a seat. As the rain drummed above, I listened to my radio; the forecast was gloomy.

After an hour of steady grind, even my granny gear was not low enough. Once again, I pushed my laden bike."

There was temporary respite at least, the brisk wind hurrying away the clouds and letting the re-emerging sun dry the tarmac. My mood improved as I left the busy main road behind, taking a turn-off to Agrokipia and Mitsero. Rural tranquillity surrounded me. With no need to ride far that day, I made camp on the grassy margin of an olive grove.

Next morning began with a long, slow climb, first pedalling, then walking – the first of many occasions when the Troodos required me to put my two flat feet on the tarmac. The height gained was soon lost as I descended to join the E906 main road and head south.

Passing the Forest Ranger station, I enjoyed a gently sloping, traffic-free road through a wide valley filled with pine trees. The conical foothills then began to close in around me and the road steepened. After an hour or so of steady grind, even my granny gear was not low enough. Once again, I pushed my laden bike.

It was a beautiful valley. Little cabins snuggled into side ravines or clung to the tops of steep slopes far above the river. Small patches of land had been terraced and cultivated for olives. Almond blossom here and there brightened the scene.

I was heading for Livadia, still some distance uphill. Entering the village of Alithinou, fat drops of rain began to fall so I decided to stop early. Finding a patch of flat ground to camp on wasn’t easy!

A weak sun appeared next morning as I embarked on my push up to Livadia. It wasn’t too many paces, thankfully. Soon I’d left it behind and was trudging up the narrow street through the village of Polystypos. Grape vines arched above my head. An old man out in the street washing potatoes in a bucket offered me cake and lemonade. Troodos was now only about 20km distant.

A chilling freewheel took me down into the massive topographical amphitheatre that cradles the towns of Chandria and Kyperounta. A heavy mist curtailed what must be a splendid view; I was still around 1,400m above sea level. The road west followed a contour line, offering an easier ride. Soon the verges were decorated with dollops of melting snow, and tiny burns dribbled off the rock-and-pine slopes. 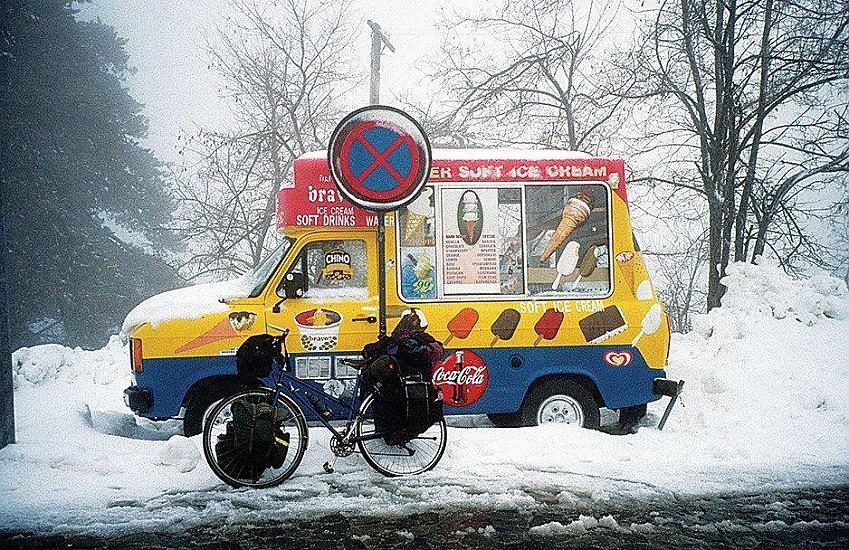 I had resolved to reach Troodos that afternoon but reconsidered, seeing the road climbing steeply again. I pitched camp in a copse of pines bordering the road. A thick blanket of needles made a comfy bed.

Beyond the snow line

It was a chilly night at this elevated camp, especially as my sleeping bag hadn’t fully dried out, and there was little warmth next morning. A southerly gale began to blow. It would be another morning of hard graft.

The road ahead made a tight turn into the long climb I’d seen the afternoon before. The one consolation was that the wind was then at my back. Soon I’d crossed the snow line. At the top of the first incline, the road made another tight turn and I was hit full in the face by the gale. I waited for it to abate before lowering my head against the thick confetti of icy flakes whipping towards me.

The gradient eased but I was still plodding upwards. My shoulders ached and my hands were starting to feel numb despite my gloves. Whilst the tarmac was clear of snow, the countryside was smothered to a depth of 30cm and more. A black 4×4 approached. As it reached me, the driver stopped, reversed 50 metres, and stopped again. He jumped out with a camera, shooting pictures as I continued walking towards him. But he didn’t want to talk and was soon gone.

Further up the road, the guys on sentry duty at the military camp looked cheesed off. Across the road from them, cabins and caravans on a campsite were smothered in snow to the point where their shapes were almost obliterated.

Finally, as I rode into thick mist, the road levelled out. Within a few minutes, I was in Troodos Square, 1,700m up. The snow was slushy, the air very chill, but at least it was calm. A couple of cafés were open, as were a few market stalls. Customers were scarce. People had driven up to marvel at the snow and were walking around well wrapped-up against the winter cold. I was wearing three top layers but my legs were bare below the knee; no wonder they were staring.

I didn’t linger. The downhill road was one that I’d ordinarily relish, but the pleasure of freewheeling from this altitude was diminished by the bitterly cold air. I took the descent steadily, relishing the panoramic views to the south, where a flotilla of toy-sized boats bobbed in the bay at Limassol. Soon I’d passed below the snow line and the mountain range was at my back.

Conditions: Chill winds, gale force at times, with brief spells of warming sunshine. Thick snow on the highest road across the Troodos Massif.

Accommodation: Wild camping, except for a few nights self-catering in Paphos at the start, two nights in a hotel at the end, and three nights in Tony’s Guesthouse in Nicosia.

Maps: Borrowed and then subsequently lost.

I’m glad I had: Warm gloves, a pocket radio, at least one absorbing book, and porridge oats.

Next time I would: Not go so early in the year! I’d also take some sweet chilli sauce to pep up the pasta.

Further information: My book, ‘Pasta Punctures and Perseverance!’ covers this and other trips. It’s available in paperback from authorhouse.co.uk, Waterstones, and Amazon, priced £27.95, or for Kindle from Amazon for £2.99. Royalties from sales are being donated to SCOPE, the UK Charity supporting those affected by cerebral palsy – as is the fee for this article. 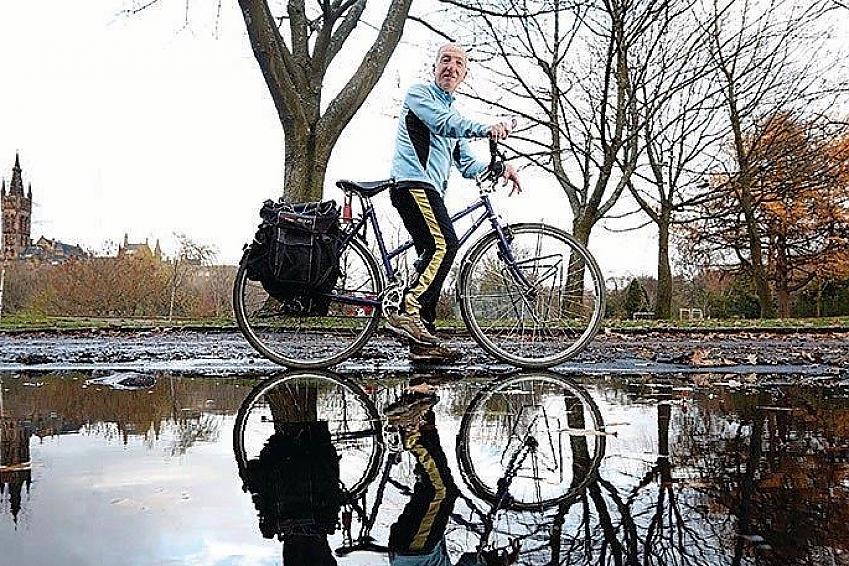 My cerebral palsy is not particularly severe but does affect all four limbs, my right arm and leg especially so. My dexterity is compromised, which can lead to frustrations in the tasks associated with a cycling-camping lifestyle.

My cycles (I own a number) are standard models but because my ankles do not flex enough to get my feet into toe-clips or cleats, I pedal with the arches of my feet on flat pedals. My gear levers are on the down tube, both operated (rather awkwardly) by my left hand. I can handle most repairs when out on the road.

My arrival in many villages has initiated a degree of consternation when the onlookers see how I walk. Is he okay? Is he injured? Not easy to explain, but the concern quickly turns to the proclamation of ‘bravado!’ when they are assured that all is well.