Great on the road, the tandem was trickier on board trains...
By cotterell
Thursday, 1 August 2013

In Steve Rowley’s family, there’s one keen cyclist: him. But he persuaded the others to give cycle touring a try, and they headed for south west France.

For years I’ve wanted to take my little family cycle touring. In the end, my wife Kirsty, not an obsessive cyclist like me, reluctantly gave in. Kirsty’s daughter Ellie would be the stoker on our Orbit Routier tandem, even though riding a tandem with your step-dad is not cool.

I went into planning overdrive. I bought Richard Peace’s Cycling Southern France and we decided on a route from Bayonne to Saintes up the Bay of Biscay coast."

Once the decision was made, I went into planning overdrive. I bought Richard Peace’s Cycling Southern France and we decided on a route from Bayonne to Saintes up the Bay of Biscay coast. This ticked all the boxes: largely traffic-free, flat, and not too long. European Bike Express bus tickets were bought before anyone could change their mind.

We did not want the first few days of our tour marred by stiff legs and sore bottoms, so planned some rides at home. These were scuppered when Kirsty ending up on crutches after injuring her foot at an exercise class. Then she hurt her knee. Once she’d recovered, the holiday was looming large.

We decided to have a dummy run: a weekend away in July with my cycling buddy Mark, his charming wife, and their two lovely children. We loaded our bikes with the fortnight’s worth of kit and camping paraphernalia that we’d be taking to France and cycled a 34-mile route, camping overnight. It was a success! We were good to go.

Spool forward to a Saturday in early August. We met the European Bike Express near the Dartford Crossing. It was an hour late due to traffic. Continuing traffic hold-ups meant that we missed our ferry. Our route took us through Paris, with good views of the Sacre Coeur and the Eiffel Tower. After 22 hours, we arrived only three hours late in Bayonne.

The following morning, we followed the L’Adour River out of Bayonne. As the drizzle turned to sunshine, some workers standing around a cement lorry sent us on our way with a shout of ‘Courage!’ The miles slipped by until we reached our first campsite on the outskirts of Vieux-Boucau-Les-Bains. It was full. We tried another site close by. It was also full but they squeezed us in as we were on bikes. After 30 miles, the nearby Toro Piscine event (bulls chasing people round a ring) that went on noisily until midnight was not welcome...

Day two was all about heat, too many miles, hills, and Sudocrem. We had a mid-morning stop at a chemist to get some medication as Ellie had a cough. Our route was primarily on cycle tracks through pine forests. During the afternoon, Kirsty was getting saddle sore, so nipped behind a pine tree to apply Sudocrem. Thenceforth we were Team Sudocrem.

By early afternoon, we had completed 30 miles. But the site by the beach at Contis Plage was full. There was another site a mile or two away up a hill – mercifully not full. Kirsty chafed about the trouble we had had finding a site on consecutive nights and, Sudocrem notwithstanding, simply chafed... Once the tents were up, I rode alone into town to buy food.

After only two days on the road, Team Sudocrem was not in good shape. We had a rest day. A taxi took us to the beach and we enjoyed a smashing moule frites dinner. We rounded off a much better day by booking a camp site for the following night.

Our third day of cycling was a great improvement. Before we set off, Kirsty went wild with the magic white cream, and the rest day paid off. The day’s ride was the easiest so far and very enjoyable. After just 20 miles following the river, we arrived at our site near Bouliac.

It was a Thursday. We had planned to spend the weekend camped close to the Dune du Pyla, Europe’s largest sand dune and within easy reach of Arcachon. Given our campsite challenges, booking in advance again seemed advisable. I started phoning. No luck. We decided to consider our options in the morning after a good night’s sleep – which we didn’t get.

All we could hear from Ellie’s tent was constant coughing. The medicine wasn’t working. To make matters worse, at 10pm our peace was shattered by a loud guitar riff and a singer greeting his audience. The audience was clearly delighted that the concert down by the lake had started, and roared back. Around midnight, the concert finished and Ellie finally fell asleep.

Friday 13th started bleakly. The site owner had forgotten to place our bread order so we were without breakfast. Thankfully she sold us some eggs, and so we scrambled them on the Trangia. Our touring party was somewhat subdued as we hit the road.

Following some easy cycling, we happened across a typical French café. Inside, a few French blokes sat around a table with the remains of a baguette, some glasses of wine and cups of espresso. Madam fussed behind the bar, then served her customers with glass bowls of fruit salad topped with whipped cream. My eyes lit up. ‘Madam, we’ll have three of them si’l vous plait, avec Organgina, mercy buckets!’

Once refreshed, moods lightened. Team Sudocrem mounted up. At a supermarché, we bought some different medicine for Ellie, plus a portable BBQ and grub. We found a pitch at a site near Parentis, and the medicine seemed to help Ellie’s cough.

Our approach to the Dune du Pyla and its troublesome campsites was carefully planned. We would split the ride over two days. Part one would be a short ride to Biscarrosse Plage, where we would camp. Part two would be a short dash up to the dune to get there before the sites filled up.

Part one should have been straightforward but my navigation prep wasn’t perfect. We got lost in a posh, hilly housing estate whilst the temperature soared as high as my stress levels. Eventually we got back on track and found our site. The pitch cost 45 Euros! That afternoon, we walked to the beach for a swim.

We were up early next day to get to the dune. The 13-mile ride from Biscarrosse Plage was fast but got hilly as we approached the Dune du Pyla."

We were up early next day to get to the dune. The 13-mile ride from Biscarrosse Plage was fast but got hilly as we approached the Dune du Pyla. We piled into the first campsite we came across and secured a pitch. We had spotted a bus stop opposite the site entrance, so put up the tents and caught the bus into Arcachon.

Over lunch looking out at the Bassin D’Arcachon, we planned the next leg. Our route had us crossing by ferry to Cap Ferrat, then carrying on up the coast. We would camp at Le Grand Crohot, where the map showed just one campsite. We phoned. It was full. The tourist office confirmed that there were no sites nearby.

We dropped in on the SNCF info desk at Arcachon railway station, manned by an international marketing student called David, whose English was top drawer. He explained we could get to Royan by train; carrying bikes was not a problem. Even the tandem? After conferring with his manager, David said SNCF would carry the tandem but the Chef de Train had the right to prevent us from boarding if the train were too full. Despite the risks, we bought tickets to Royan and spent two days relaxing.

Then it was the Day of the Trains. We broke camp early for our ride to the station and the first of three trains. Our journey to Bordeaux was on a modern commuter train, into which the tandem fitted easily. But the train to take us on our longest leg to Saintes was of an older design, with tight bends from the doors into the narrow corridors. I removed the tandem’s front wheel, twisted the handlebar in line with the frame and jammed it on board. The train stood in the station for ages, so at any moment I expected us to be thrown off. But then it got going. Our elation was not shared by the SNCF chap who only just managed to squeeze his buffet cart past us...

It’s not (just) about the bikes

Our time in the Royan area had two highlights: a major seafood binge and a visit to La Palmyre Zoo. And then sadly – for me, at least – it was time for our final 28 mile ride from Royan to Saintes.

It was one of those archetypal French cycle touring days. The sun shone with increasing intensity as we rode through fields of sunflowers, past orchards and vineyards. I loved the very rough road that ran alongside the Royan-to-Saintes railway line and stared with disbelief at the GPS, which told me the road went straight through a farmyard. The GPS was correct, and we were greeted by two farm kittens playing in the sun.

After a day in Saintes, we re-boarded the European Bike Express. This time the journey went to schedule. We had cycled only 190 miles but then it’s not really about the distance. Despite a few teething problems, we have memories to savour from our trip. Team Sudocrem will likely ride again – and next time not so reluctantly.

This was first published in the August / September 2014 edition of Cycle magazine.

If you’re contemplating a tour with a non-cycling partner and kids, try a few dummy runs with all your kit before you set off. It will build fitness and confidence, and give everyone an idea of what to expect. Plan meticulously to avoid morale-sapping nasty surprises once you’re on tour. Keep daily mileages modest.

Bayonne to Saintes, mostly on the cycle paths described in Cycling Southern France. Trains from Arcachon to Royan.

July and August are the school summer holiday period, so campsites are very busy – as we found! May, June, or September should be quieter, while still being warm enough.

A Garmin GPS, which I spent hours loading with the strategically placed waypoints to aim for.

Book some campsites in advance! 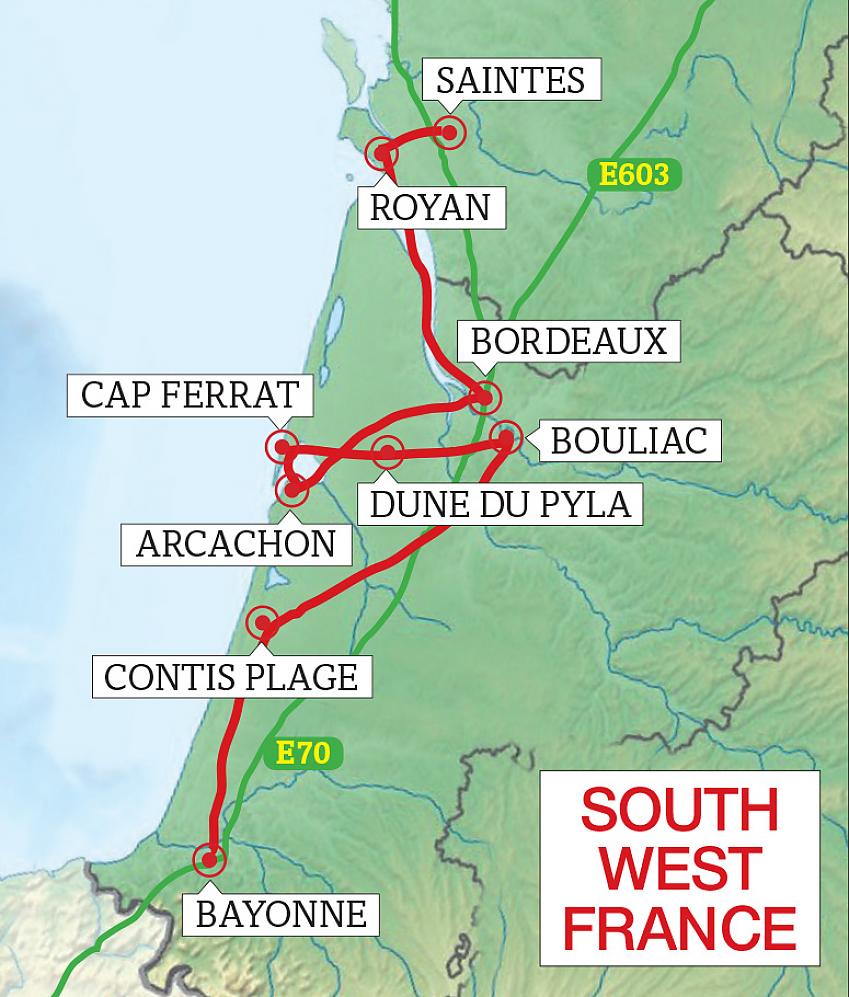 Travellers' Tales: Pedalling for pangolins View
Cycling UK continues to support the UK to cycle
This remains true during this difficult period with the ongoing threat of coronavirus Covid-19
Read our latest advice on cycling
Join Cycling UK to help us change lives and communities through cycling
Membership gives you peace of mind insurance, discounts in cycle shops, rides & routes
Join now