Riding a tandem is, unarguably, the best way for two cyclists of widely differing fitness and strength to find a mutually agreeable riding pace. There is plenty more to these enjoyable machines, but this aspect alone is enough to commend them to couples who would like to ride together but who tend to find themselves literally drifting apart as they pedal. Tandem riding is exhilarating fun and especially so on a suitable machine – one that fits both partners and is comfortable, efficient and safe.

Tandem design is about more than simply accommodating two riders between two wheels and using beefed-up cycle parts. The fine details of geometry affect steering and control, the transmission has an extra layer of complexity, and the brakes need to work well. None of this is of any account unless the stoker – the rider at the back – is comfortable, in pursuit of which goal the machine may be fitted with a suspension seatpost; if the pilot can’t avoid a pothole or bump, the stoker gets the worst of the resulting jolt.

The two tandems on test are closely matched in design and construction; design pressures may be expected to produce convergent evolution. What is perhaps surprising is that there are so few other tandems available at this price point. Step up a grand and the market widens.

What is perhaps surprising is that there are so few other tandems available at this price point. Step up a grand and the market widens.

Both tandems combine a neatly TIG-welded aluminium frame, built using greatly-oversized tubes, with a TIG-welded unicrown steel fork. It’s a well-chosen combination for tandem use, where the fork needs to be exceptionally strong yet resilient and the frame torsionally stiff. Both use a version of the direct lateral tandem frame layout, which is widely considered the best way to build a road tandem. The long central tube, split at the front seat tube and running from the head tube to a point close to the rear bottom bracket shell, adds lengthways torsional stiffness and constructs a triangle within the main frame for vertical strength, both with the minimum of material.

Direct lateral designs differ on details such as the precise positioning of the rear lateral tube. The Orbit closely approximates to a classic example, its only obvious departure from a strict interpretation being the alignment of the rear top tube, which joins the seat tube below the seat stays. The bottom tube, also known as the ‘link’ or ‘boom’ tube, connects the two bottom bracket shells and must be super-stiff for transmission efficiency. Orbit’s design is of round section as it leaves the front shell and graduates to rectangular section before it reaches the regular-sized rear. It’s a neat way to accommodate and even take advantage of the massive shell needed to house the eccentric adjuster for the front ‘timing’ chain. Both bikes employ a pair of low-tech, low-cost radial bolts to secure the eccentric adjuster. These tend to indent the alloy of the eccentric itself, hampering fine adjustment; a wedge or clamp type is superior in this respect.

The all-circular Dawes bottom tube intersects with its rear lateral tube some way in front of the rear bottom bracket shell. Something similar happens at the front, where the top tube meets the front lateral tube some way back from the head tube. The result lacks the excellent triangulation of the Orbit and adds to the length of the head tube, which in turn is braced against the underside of the ovalised down tube using a sturdy gusset. The Orbit has its own gusset in the same place and, in truth, neither frame is notably lacking in front-end stiffness.

What really sets them apart is the length of their respective head tubes. The Orbit’s is short, which in turn keeps the front handlebar position similar to where you’d find it on a sporting solo road bike. Thanks in part to its rangy fork, the Dawes offers a much higher lowest handlebar position. Their front top tube and seat tube lengths may be similar, but the Dawes provides a more sit-up-and-beg riding position. It is also longer, to the tune of 20mm at the back. This found favour with my 5ft 2in stoker, who liked the roomy accommodation. She also liked the Galaxy’s flat handlebar, which contrasts with the swept-back stoker bar on the Orbit.

Other than in saddle-to-handlebar proportions, the two framesets differ most in their steering geometry. That of the Orbit is classic contemporary road tandem, with a shallow head angle, long fork offset and short trail figure. Stable handling unaffected by unwanted steering input from the stoker is the desirable result. The Galaxy’s head angle is steeper and the fork offset shorter, giving similar trail but sharper steering. The bike is 15mm higher off the ground, too. There’s a hint of oversteer and front-end wander at moderate descending speeds.

Painted black, the Orbit’s fork lacks the liveried appeal of the Dawes fork and its superfluous disc brake mount and hose locators. A front disc is an option when buying the Orbit but omitting the mount from the non-disc fork saves weight, which easily adds up on a two-seater. Both forks have mounting points for a front low-rider rack and the Dawes comes with one as standard.

The Dawes fork and hub are disc-brake ready. That means a little extra weight if you are happy with the front cantilever. The fork has less offset than the Orbit's. Trail figures are similar since the Dawes uses a steeper head angle, but the Orbit's handling is more assured.

At the heart of any tandem lies the transmission, which in today’s leisure and touring market usually employs a cross-over drive. The timing chain is on the left-hand side of the bike, leaving all three of the right-hand rear chainset’s rings free to drive the rear wheel. The Orbit sticks with square-taper axle technology for its Truvativ-sourced cranks, while the Dawes gets external bearings and oversized axles from the same manufacturer. While any difference is impossible to quantify from the saddle, the stiffer axles on the Dawes should provide superior power transmission, especially at the rear. Both machines offer dual-control shifting by Shimano, along with a broad spread of gear ratios. Those of the Orbit are lower overall and therefore better suited to touring, but the difference is slight.

Further similarities extend to 48-spoke wheels and 700ﬁ32C tyres at both ends. The Dawes rear wheel was noticeably out-of-round from the box. Both bikes boast telescopic, multi-adjustable stoker bar stems and suspension rear seatposts. I mentioned that the flat bar of the Dawes got the nod over the Orbit’s rearward-swept offering. So did the placing by Dawes of one rear brake at the stoker’s command.

Brakes, of course, can define a tandem’s performance. Both feature a 203mm rear disc alongside rim brakes front and rear. The Orbit’s rear V-brake is operated by the pilot using a bar-end control and is provided as a back-up rather than a drag brake, with the rear disc and front V-brake operated using the brake levers.

On the Dawes, cantilever brakes take care of the day job while the stoker gets to operate the mechanical disc provided as back-up. Cantilevers can offer excellent power and modulation if well set-up, but the tight cable routing of the Dawes front brake robs it of both. Shortening the cable would hardly improve matters; it needs a deeper hanger to straighten the cable run. In any case, there is enough braking capacity on both machines if used with care and forethought. As an aside: why can’t somebody re-manufacture the classic and highly sought-after Arai drum-type tandem drag brake?

‘Comprehensive’ is the word for the Dawes, although an attempt to fit the front mudguard supplied with it had to be abandoned when it became clear that the tongue on the guard was too short to reach the crown drilling. The Orbit has similar equipment but is not supplied with a front rack.

The rear rack in both cases must clear the disc calliper. The Dawes does this by introducing a big bend into the relevant strut, while the Orbit shifts the strut sideways on a long peg. Both measures significantly reduce the load-carrying capacity of the rack on that side; pack your panniers with care to avoid structural failure.

1. The Dawes fork and hub are disc-brake ready. That means a little extra weight if you're happy with the front cantilever. The fork has less offset that the Orbit's. Trail figures are similar since the Dawes uses a steeper head angle, but the Orbit's handling is more assured.

2. The Travel Agent enables the Orbit's right-hand Stora STI lever to operate a front V-brake. The rear V-brake is a drag brake operated by a bar-end friction lever, while the left-handed Sora lever works an Avid BB7 rear disc.

3. A simple suspension seatposthelps cushion the stoker from bumps and potholes the pilot fails to avoid. The Orbit also has one.

These two tandems differ enough to offer clear alternatives: the Orbit is better handling and, out of the box, better assembled. It also offers a sportier pilot’s riding position and, importantly, is available in more sizes. With a bit of spannering, the Dawes could be its equal in most respects. If it is less composed on the road, it offers more room at the back and a more upright position for the pilot along with a more up-to-date transmission.

Tandems appeal to couples who regularly cycle together, to the parent and child who want to share a bike, mixed-ability couples, and those with disabilities e.g. sight or balance problems. A tandem is quicker on the flat and much quicker downhill than two solos but tends to lose out on climbs.

Most new tandems are supplied by a small number of specialist dealers and frame builders. Older second-hand tandems are good value if they have been well cared for. Check an old tandem can fit modern replacement components like gears, hubs or bottom brackets.

Transporting your tandem deserves some thought. A conventional-wheeled tandem is roughly 2.3m long and weighs about 22kg, so it will fit on the roof of most cars. Specialist roof carriers are available. Some tandems now come with S&S couplings allowing the bike to be split for easy travel. Flying on most airlines is no problem. Most UK train operators will not carry non-splitting tandems but you can sometimes get away with it on uncrowded trains.

The UK Tandem Club has around 4,000 members, runs a comprehensive website, and publishes a journal six times a year. Membership £10 a year for a couple. 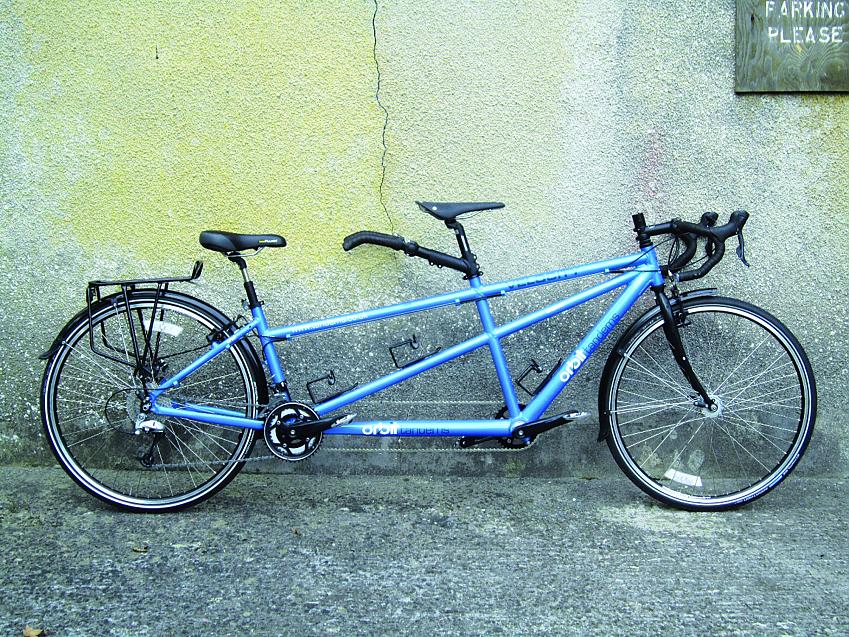 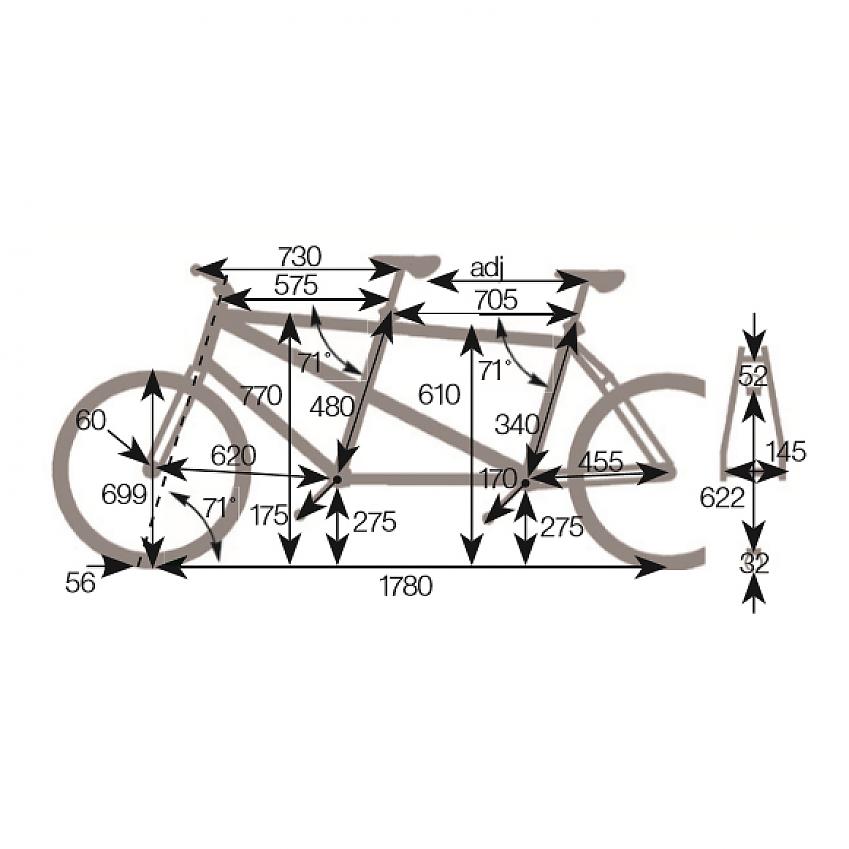 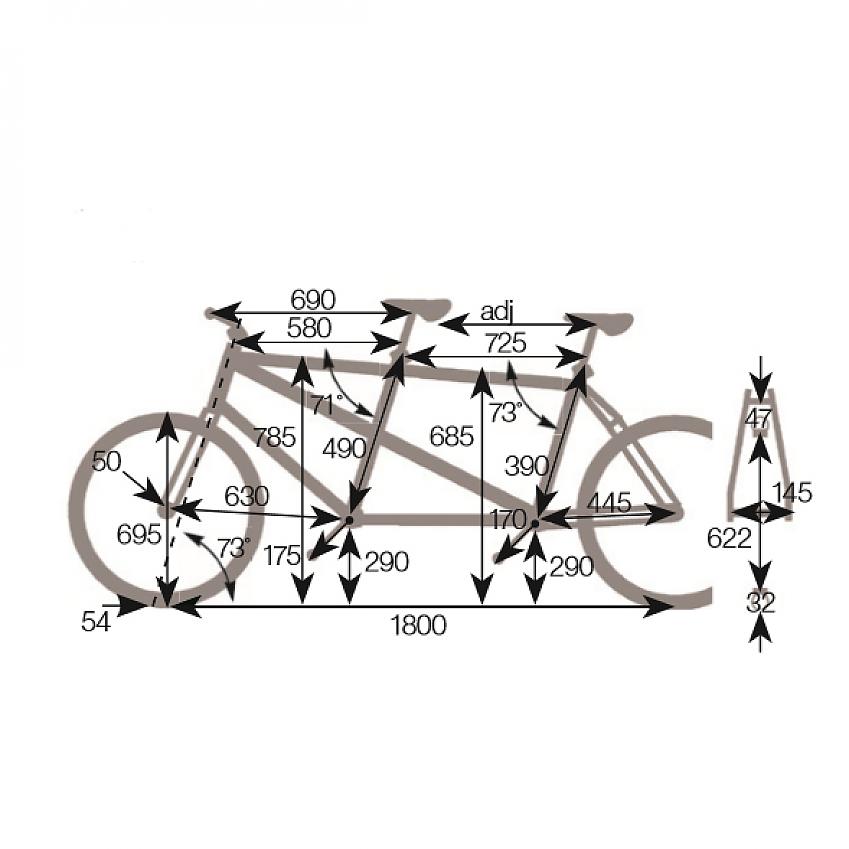 Circe Helios Omnis Plus from £1949

Versatile 20in wheel touring tandem that can also be converted into a cargo bike or child carrier. The Helios range starts at £1349. circecycles.com

Chrome-moly steel frame in five sizes with wealth of build options but Rohloff hub gearing only, which accounts for the price point. thorncycles.co.uk

Chief Exec Paul takes to his tandem to discover the cycling treasures of Cheshire View
Cycling UK continues to support the UK to cycle
This remains true during this difficult period with the ongoing threat of coronavirus Covid-19
Read our latest advice on cycling
Join Cycling UK to help us change lives and communities through cycling
Membership gives you peace of mind insurance, discounts in cycle shops, rides & routes
Join now