Road-plus is what the industry in general and WTB in particular has begun to call drop-bar bikes with 650B wheels and fatter tyres. The name was surely inspired by plus-size mountain bike tyres but makes sense in another way. Those wider tyres are better able to cope with roads plus a bit more besides: roads with potholes; roads with horrible chipseal; gravel roads; forest roads; bridleways.

Until recently, 650B (ISO 584) was a wheel size favoured by French tourers. Now it’s usurped 26in (ISO 559) as the dominant wheel size for new mountain bikes, so there are lots of quality rims and off-road tyres available. Nice-rolling 650B road tyres aren’t the rarity they were either, thanks to converts such as Jan Heine of Bicycle Quarterly and Compass Cycles persuading Panaracer to make more. For a sporty, all-purpose road/off-road bike, 650B is thus a better option now than 26in.

Cannondale were an early adopter of 650B for the road, launching the Slate to raised eyebrows two years ago. They describe it as "a full-tilt road bike with legitimate off-road chops." Three of the models have a short-travel Lefty suspension fork. This one has a rigid fork, which is equally practical for the sort of off-road riding you’d do on a bike like the Slate.

Framebuilder Richard Hallett has been carrying a (brazing) torch for 650B wheels for longer than most. A 650B tourer of his won Best 2015 Touring Bike at Bespoked, and if you Google ‘650B road bike’, Richard comes up twice in the first nine hits – including the top one. He’s also written about fatter road tyres for Cycle in his capacity as Technical Editor. (That’s not why his bike is in the review, however, and I hope it goes without saying that he didn’t see this review before it went to press.) As well as 700C bikes, he offers two 650B options: the 650 Sport with ~32mm tyres; and this, the wider-tyred 650 Adventure, described as ‘a true all-roads tourer and “gravel-basher”’. 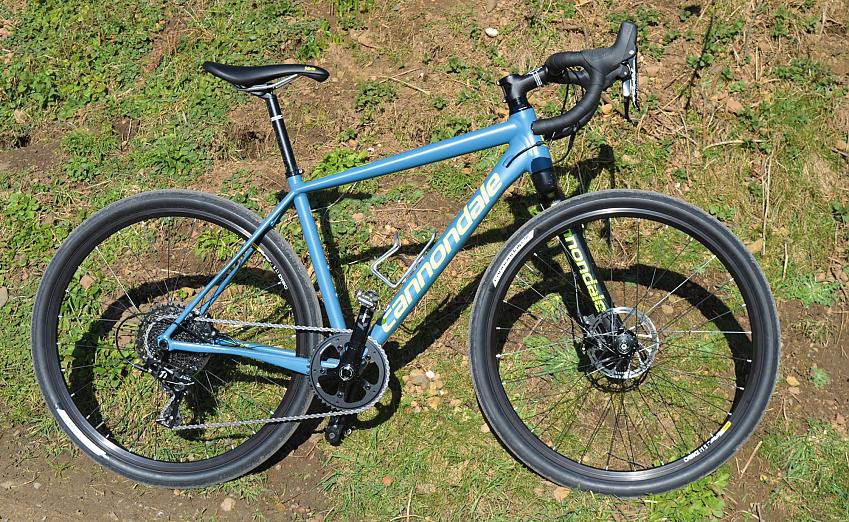 A 650B wheel with a 42mm tyre has roughly the same diameter externally as a 700C wheel with a 23mm tyre. So the geometry of a road-plus bike need not be radically different. Some road-plus bikes have the clearance (and disc brakes) necessary to run wide-tyred 700C wheels interchangeably – 40-622, for example. These two don’t. That means buying into 650B in a real sense, which is a consideration if, like me, your only spare wheels and tyres are 700C/29er sized.

Cannondale’s distributor advised me that the Slate had a short reach for its size and suggested I try the Large. But I’ve got a bad back and invariably fit shorter stems to stock bikes. The Medium fitted me perfectly, and was just long enough for my toes to clear the bare tyre.

The Slate’s smoothly hydroformed aluminium frame has the rear brake hose and derailleur cable running internally, through not just the down tube but the bottom bracket and chain stays too. It’s neat but will complicate replacement. The bottom bracket is a BB30A unit, an asymmetric 73mm-wide version of the BB30 standard that Cannondale developed. I’m not keen on any kind of press-fit but would prefer one, such as the standard BB30, that could be swapped for something like a Praxis Works Conversion BB when the time came.

The Slate’s seat stays and chain stays are radically flattened. This is ‘Save-plus micro suspension’, and it surely is micro alongside those voluminous tyres. I’d look to the fork first for vibration reduction – and here that’s monolithic. The aluminium Solo Rigid fork has a 1.5-inch steerer, a chunky single leg, and a stub axle. It’s strong, stiff and light. Puncture repair can be done with the front wheel in situ, although when you do have to remove it you have to unbolt the brake calliper first. Perhaps surprisingly, it is possible to fit a full-length mudguard to this fork.

Every Hallett 650 Adventure is custom built. Normally you’d visit Richard in West Wales and he’d watch you riding before agreeing measurements. That wasn’t practical for this test, so I just sent Richard some numbers. He wanted to build the bike with longer stem and shorter effective top tube than I asked for, partly for aesthetics, partly because a shorter stem means lighter steering. I said okay, but would have pressed the issue if I were ordering. I’m used to shorter stems, and there is an advantage in having more length in the frame: toe room. With a mudguard, there was barely enough here. As it turned out, I fitted a stem that was another 1cm longer to fine-tune the fit.

The Hallett 650 Adventure is available with your choice of frame fittings, dropouts, fancy lugs, and stainless steel highlights. I asked for the standard fillet-brazed frameset. It’s Columbus Zona tubing, with a Columbus SL fork. Both are as neatly built as any bike I’ve tested. The paintwork is pretty too, and the stainless steel head tube ‘rubbing strips’ will help keep it looking that way.

The high point for me is the fork. A lugged fork looks nice, but more importantly the slender blades of this one provide some resilience that’s noticeable even with the fat front tyre. Its longer offset (I measured it at 55mm) reduces the trail and normalises the steering response of the otherwise harder-to-turn fat front tyre. So it feels much like any other sporty, drop-bar bike. The Slate, by contrast, has slower steering that’s reassuring off-road but a little at odds with its ‘full-tilt road bike’ aspirations. More fork offset, please. 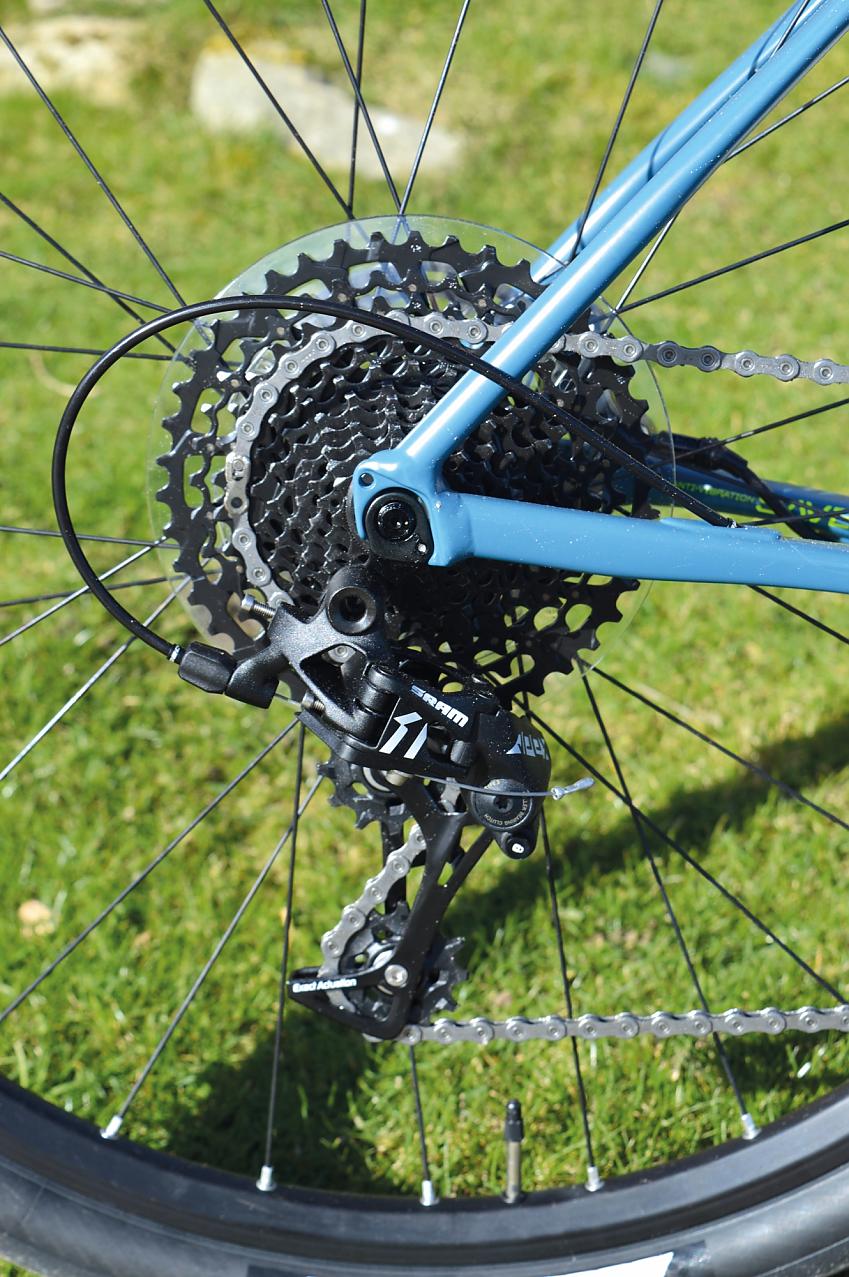 Above: With a 44t chainring and this huge 11-42 cassette, the Slate's gear range is 28-107in - a more useful range than many road bikes with compact doubles.

The main difference between the Panaracer-made 650B tyres on these bikes and the 26in slicks (Vredestein S.Licks, Panaracer Hi-Roads, etc.) that I’ve used on fat-tyred road bikes in the past isn’t the 25mm variance in bead-seat diameter but the quality of the tyres. They’re simply better. Both pairs are supple and lightweight: the Slate Folding TRS is about 300g per tyre, the Grand Bois Hêtre ~420g. Both roll remarkably well. As the Slate’s tyres and rims are tubeless ready, I’d covert them to improve the puncture resistance of this thin-skinned rubber; the Grand Bois is a bit more robust.

The gear range of the bikes is almost the same, despite the Slate using a 1×11 Sram Apex 1 setup and the 650 Adventure a Shimano Tiagra 2×10 setup with a Sugino OX601D ultra-compact chainset. The number of gears made no practical difference to me, and each bike comfortably managed steep climbs and didn’t spin out before I wanted to stop pedalling on descents. Possibly you’d want lower gears on the 650 Adventure, as it’s better suited to pannier-laden touring than the more bikepacking-focused Slate.

The Slate has Sram’s double-tap shifters. I got used to sweeping the shifter a little to change up and sweeping it further to change down, but sometimes changed down multiple sprockets when I didn’t want to. That’s what happens when you sweep the lever even further. I’m sure I’d get used to it eventually. By contrast, the Dura Ace bar-end shifters of the 650 Adventure are idiot-proof. For recreational riding, I didn’t miss the ability to shift from the brake hoods.

The brakes couldn’t be more different: hydraulic discs for the Slate, cantilevers for the 650 Adventure – albeit augmented by a Power Hanger-style brake booster that Richard made for the front calliper. Both systems provided well-modulated, powerful braking (although at 65kg, I’m no brake’s toughest test). 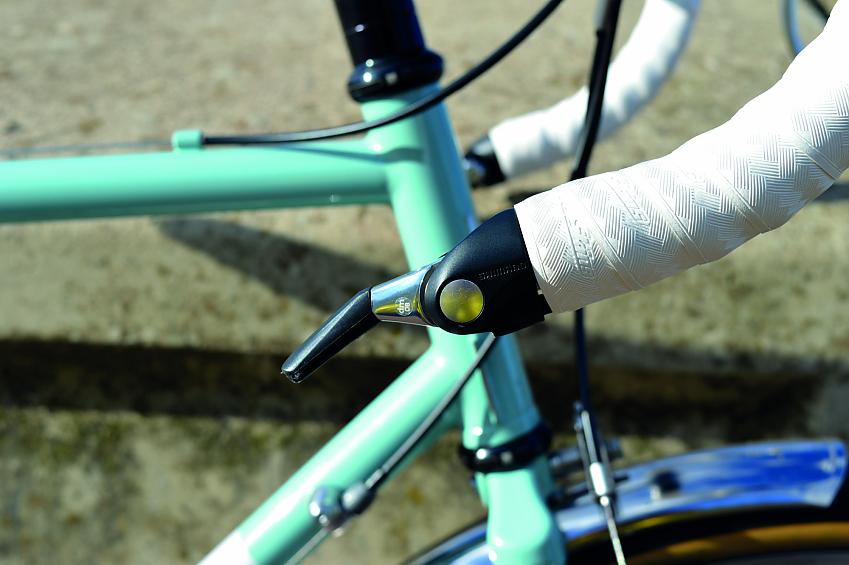 Above: Dura-Ace bar shifters are simple and reliable.

Unless the club run becomes a chain gang, you can readily keep up with companions on standard road bikes."

First the surprising thing: unless the club run becomes a chain gang, you can readily keep up with riding companions on standard road bikes. These are not heavy, ponderous machines, and those tyres roll much better than you’d imagine even on ordinary roads. The worse the road surface, the better, in relative terms, they become.

I was slightly slower uphill on both bikes compared to my normal runabout, a Pinnacle Dolomite with 700×25C Michelin Pro4 Endurance tyres. On the flat, there didn’t seem to be anything in it. Downhill, the road-plus bikes were quicker and much more confidence inspiring. They floated over road imperfections that would be alarming on skinny tyres, and when I needed to do so I could brake harder.

Unsurprisingly, 650×42B tyres are more comfortable than 700×25C. You feel it in your hands during the ride, particularly on the 650 Adventure with its more forgiving fork. You feel it afterwards because you’re less fatigued; vibration is tiring and you’re subjected to less.

It’s refreshing to see cycle design experimenting with something that makes a positive difference – tyres – rather than mucking about shaving a few grammes or coming up with yet another bottom bracket standard. Road-plus tyres give you a road bike with the rough-road capability of a cyclocrosser and the comfort of a tourer. You trade a little weight and top-end speed, but for anything other than racing, why wouldn’t you?

There’s no magic in that 650B wheel diameter; it’s merely a decent compromise. It would be nice if there were more wide, supple, fast-rolling tyres in 26in for shorter riders and in 700C for taller rides. I’d lean towards ‘700C-plus’ in any case, and would prefer a frame and fork that would accommodate them. For while larger wheels and tyres are heavier and are marginally harder to spin up to speed, I’ve only found this an issue accelerating from a standstill in stop-start urban conditions, and when riding fat bikes anywhere at all.

That said, I enjoyed riding the smaller-wheeled Cannondale Slate Apex and the Hallet 650 Adventure, both of which are difficult to pigeonhole. They’re road bikes in the widest sense of the word of the ‘road’, rolling comfortably and efficiently on gravel, dirt and pavé surfaces as well tarmac, enabling you to enjoy riding on roads less travelled. Like a touring bike? Yes, if that tourer were this light and had equally good tyres. Sports tourers, then? Or simply what gravel bikes should have been from day one?

Two things I’m sure of: 650B is a valid alternative to 700C; and my days of doing recreational road rides on 700×25C are numbered. 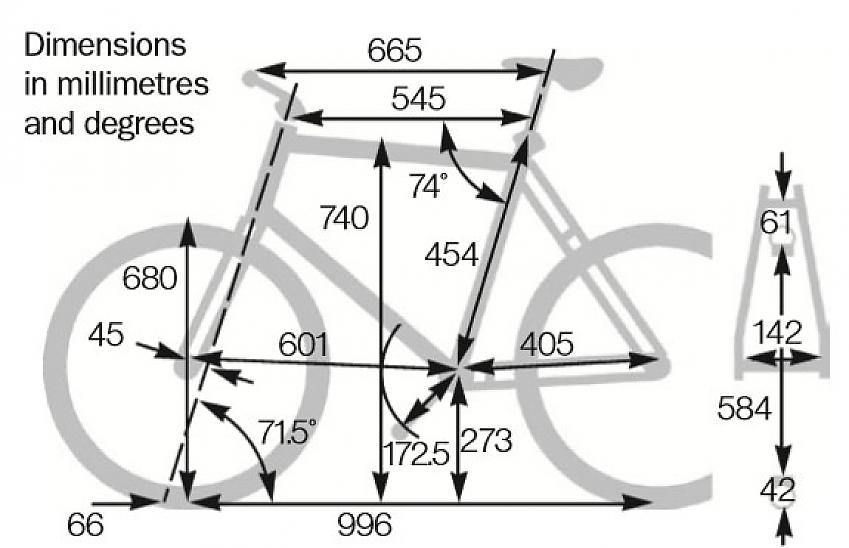 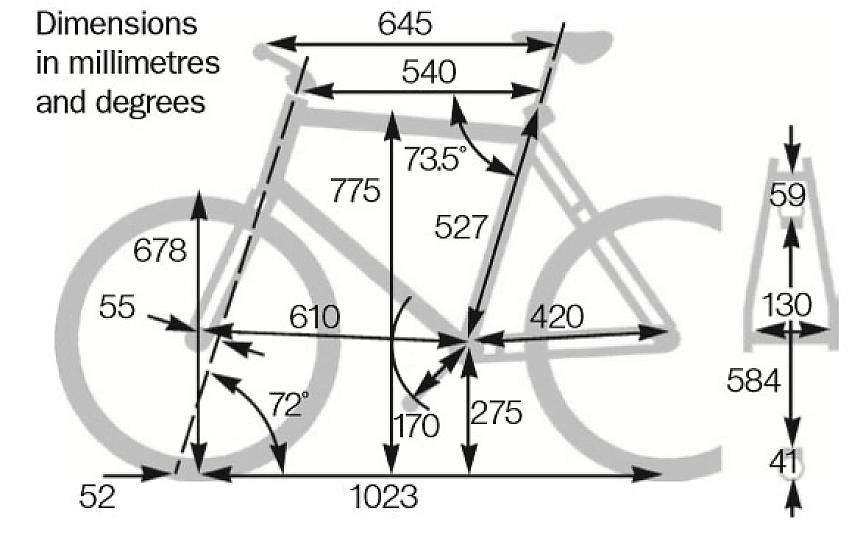 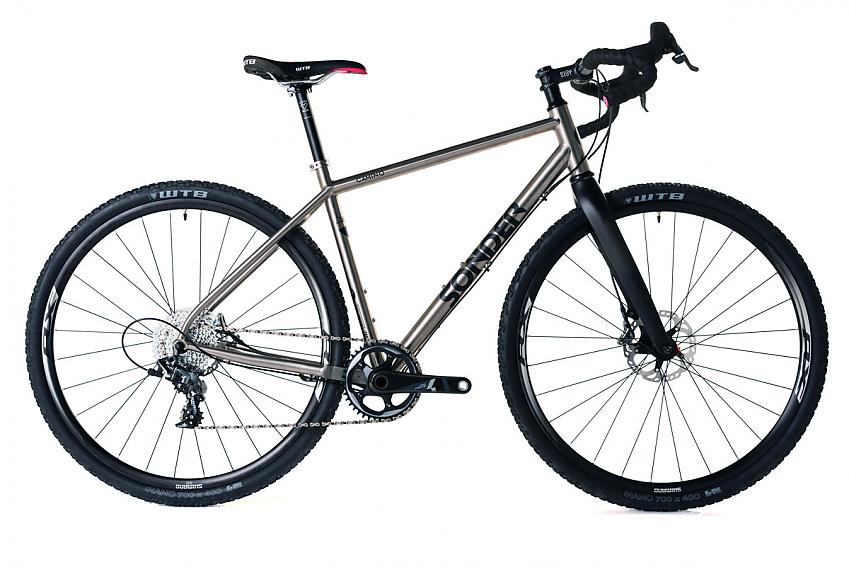 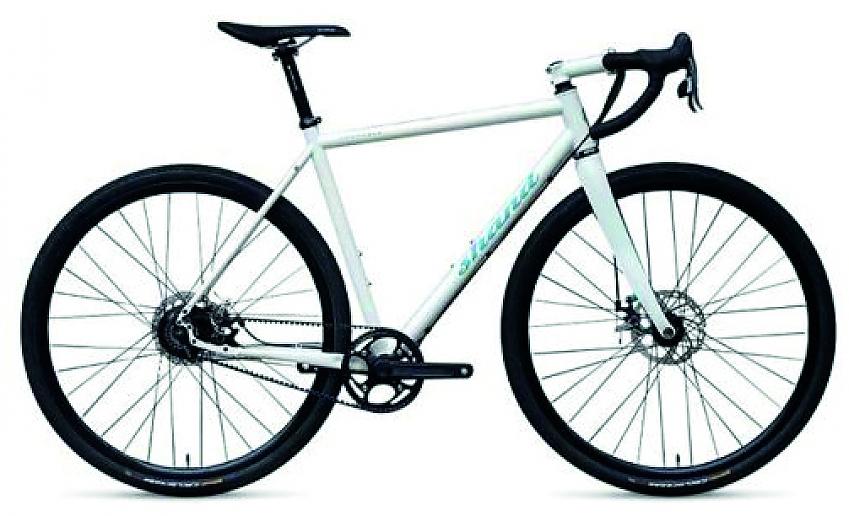 What was a 700C all-roads bike is now also offered with 650×47B tyres. (There was one at the London BIke Show.) Lots of build options.