Renovating an old bike can be hugely rewarding, whether it’s a simple respray or a full rebuild. Technical editor of Cycle magazine Richard Hallett explains.

Unless thrown into a canal or wrecked beyond repair, old bikes don’t die: they simply sit at the back of the garage, acquiring a patina of rust, oil and dirt to go with their perished tyres, and waiting to be rescued. And these days, there are plenty of rescuers around.

Finding and re-commisioning an old bike can be a cheap way to get out cycling - possibly at vintage events like the Big Bike Revival. For some, however, it can be about returning what was once a highly desirable machine to something approaching its former glory, which may mean anything from a careful restoration for use in the burgeoning vintage cycling scene to a comprehensive upgrade that hangs modern components on an old but still very much rideable frameset.

It might even mean extensive repair. The classic scene is buoyant, and genuinely interesting framesets from the golden age of British lightweight frame building fairly rare, so it can be both emotionally and financially rewarding to bring back to life a frame that might look fit to be consigned to the bin.

Any serious renovation is likely to require a respray. If it involves a repair, such as tube replacement or the addition of brazed-on parts, then a paint job will be almost obligatory, and the best work will be done by a specialist who has the required knowledge, equipment and skills. A quick search online for ‘cycle respray’ will find a dozen cycle specialists on the first page. Narrow down your choices by discussing services with fellow Cycling UK members. Search for ‘respray’ on the Cycling UK forums or start a new thread. 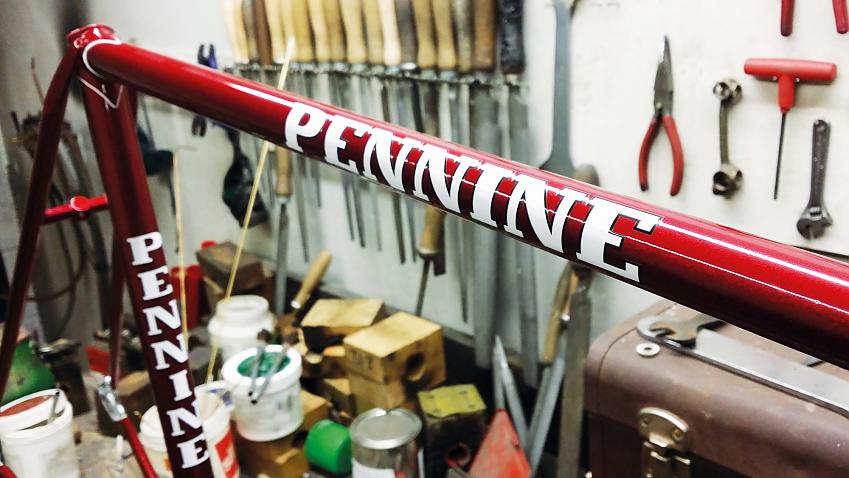 It is possible to remove paint using stripper, a wire brush and hard work, but ‘media blasting’ by someone experienced in dealing with thin-walled cycle tubes will do a faster, cleaner and more thorough job. As a rough guide, a respray will cost from £150 upwards from one of the various operations offering the service. It is worth getting a firm figure before taking the plunge, as more complicated work such as plating or polishing will add to the cost.

The cost of a repair, alteration or addition will, inevitably, depend on what is involved. A competent frame builder will be able to repair almost any damage, from replacing a bottom bracket shell to filling a minor dent, or make alterations such as spreading the rear triangle to take a wider hub, and will charge accordingly. This is an area where it is best to get a quote before starting.

Once you have a rough idea of the expense, you can make plans – or abandon them. Given that replacing a mashed rear triangle might cost upwards of £400, including paint, a frame will need to be of either monetary or emotional value to warrant a professional repair. (If a hack bike is all that’s required, the DIY option is fine.)

Time to assess the patient. Perhaps, like the frame pictured here with a cracked down tube, it is a British frameset from a well-known maker. This one is a Claud Butler Avant Coureur Spécial. Unlike a ‘curly’ Hetchins, which might fetch over £750, ‘proper’ – pre-1957 – Claud Butlers have surprisingly little cachet, and a sound but unrestored one would do well to fetch a quarter of the price. This makes them a low-cost way into classic cycling, although probably not a sound investment if money has to be spent on repair. 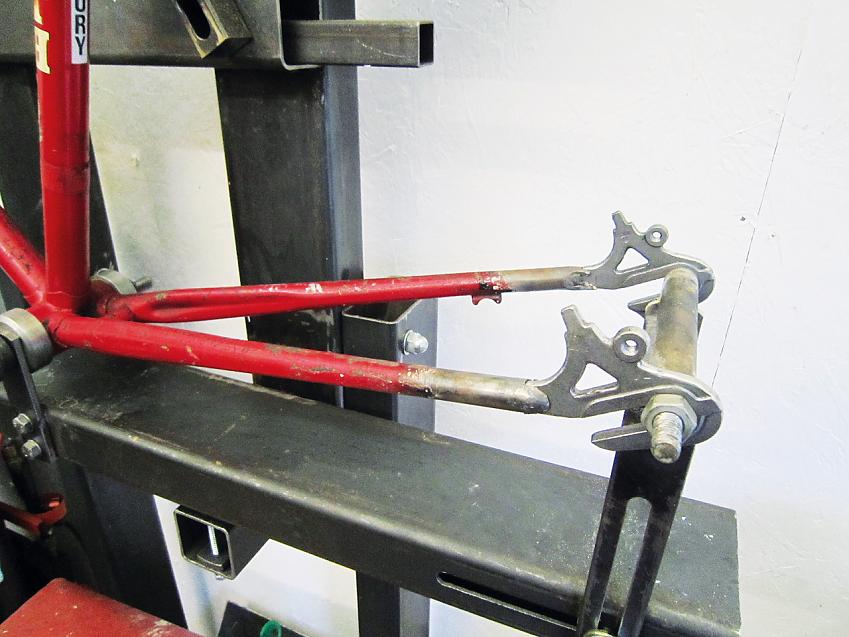 As a bike to be ridden, however, such a frame makes sense. From that fabled post-war era of great British lightweight frame building, it can be fitted out without too much difficulty with British and European components of the same age to create a machine more than capable of taking part in the occasional vintage ride.

This one is not ‘sound’ and is worse than it looks. Not only does it need a new downtube, but the bi-laminate construction means that fitting one while retaining the original decorative sleeves will take a lot of time and effort. The alternative would be to braze an internal sleeve inside the existing tube to leave the decorative work undisturbed. The fork steerer, not shown, is also slightly bent back from a light front-end impact and will need to be replaced. Getting it back on the road in something approaching original condition will, therefore, cost upwards of £350 before the headset is fitted.

The crack in this downtube appears to have started at the site of a brazed-on gear lever boss before tracking around the tube, presumably as the bike was being ridden, until an adverse change in handling characteristics alerted the owner to the worsening problem. Although steel frames can last indefinitely – below a certain level of cyclic stress, and unlike aluminium, steel has no fatigue limit – the beginnings of such cracks can be found in many older examples weakened, perhaps, by rust or minor damage. Check carefully before buying and remember that problems can be fixed.

Older aluminium frames should be given a particularly close inspection. They can last indefinitely, but classics such as the Vitus 979 and ALAN, which used threaded-and-bonded tube-to-lug joints, probably aren’t quite as durable, if ridden hard, as more recent TIG-welded designs. Minor damage to an aluminium frame, such as a dent or gouge, should be viewed as the potential source of a crack, and a visible crack as terminal unless you know of a skilled aluminium welder. Similar considerations apply to early carbon-fibre frames: check carefully that structural integrity has not been compromised.

If you’re planning to build a bike to be put to regular use, it makes sense to find a new(ish) steel frameset, perhaps from the 1990s. Custom frame building in steel remained the bedrock of the British lightweight road scene until the later part of the decade and frames from the era will almost certainly have the 130mm rear dropout spacing needed for a cassette-style freehub and clearances for regular-reach calliper brakes. They are also likely to have a steel fork, with a threaded steerer suitable for a quill stem. If you can find a 1-inch threadless headset – try Ritchey Logic – then you could get a threadless steerer fitted to the fork, which would allow the use of a 1 1/8in threadless stem with a spacer sleeve. This apart, most of today’s components should bolt straight on. 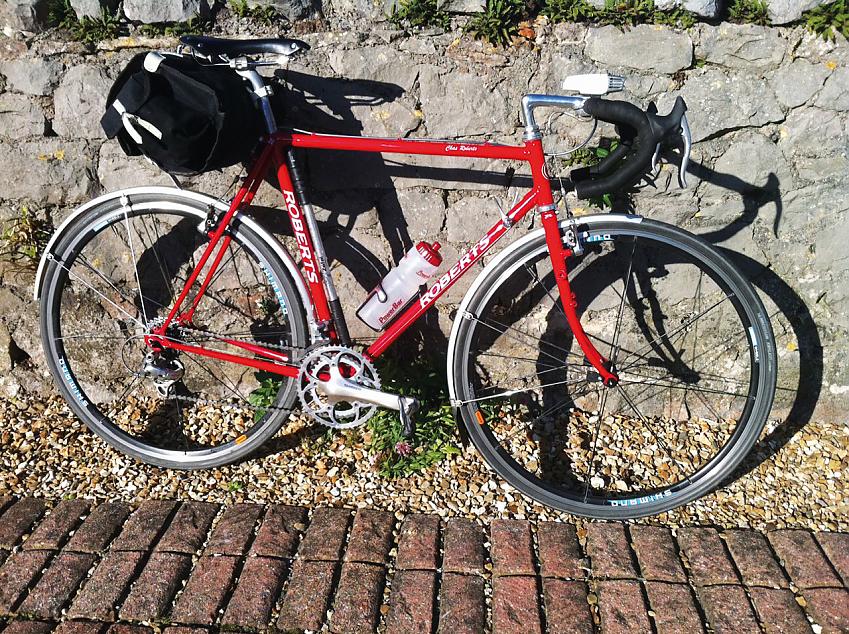 More fun, perhaps, can be had with a frameset that needs a bit more work to make it into that dream retro ride. I recently treated a frame built for my father in 1981 by Charlie Roberts to a light overhaul that resulted in the bright red beauty shown (above left). One modification it did not need was a conversion to 700C wheels.

The obvious reason for swapping from 27in to 700C is wheel choice. While 27in tyres are still available, 27in wheels (and rims) are harder to find. However, the difference in wheel radius at the rim is just 4mm, so there may be no need to swap brakes depending on where the blocks sit in the arms. If you switch 27×1 1/8in wheels and tyres for 700×25C, note that the bike will sit not just 4mm lower but around 10mm lower, which may cause problems with pedal clearance when cornering.

Fortunately, the Roberts frame was built from the start for 700C wheels, and had plenty of mudguard clearance. The main issue was its 120mm five-speed rear end. Roberts Cycles pulled the rear stays out to 130mm to accept a nine-speed (or eight, 10 or 11…) hub and added cantilever brake bosses front and rear and a rear cantilever brake cable stop to give it more of a ‘touring’ character. This lot cost £100 on top of £200 for the respray and the result looks and rides as new.

One point worth noting is that its traditional tube sizes – 1in top tube and 1 1/8in downtube, plus 1in threaded fork steerer – make for a somewhat flexy feel compared to that of a current steel frame, but as a light tourer it works really well. Recent components such as a Shimano Hollowtech II chainset and external bottom bracket bearings, Shimano 105 wheelset and modern cantilever brakes ensure a crisp feel, while indexed downtube levers lend a retro touch.

Some modifications are either impossible or impracticable: you can’t put a 1 1/8in threadless steerer fork in a frame built for a 1in fork although you could conceivably replace the head tube (and head lugs) with one for the larger diameter steerer – but why bother? It is also inadvisable to try to modify an old lightweight steel fork to take a disc brake calliper; the blade won’t be stiff enough to deal with the bending loads under hard braking and may crack or even become ‘unraked’.

Ultimately, while a competent builder will be able to advise on what can and cannot be done and at what cost, only the spender can decide if a renovation is worth undertaking. Done properly, it almost always is…

If you build up a period bike with the right parts, there are ample opportunities to show it off

Plan to participate in a vintage cycling event, such as Eroica Britannia, and you’ll want to keep your machine as authentic as possible. This need not mean using only genuine vintage components, since there are plenty of classic-styled brand new parts now on offer from marques such as Velo Orange and Dia Compe. Of course, a Velo Orange Grand Cru 50.4BCD chainset is not quite the same thing as a Stronglight 49D and will fool no one, but finding a usable example of the latter may take ages and old alloy cranks can be unreliable. 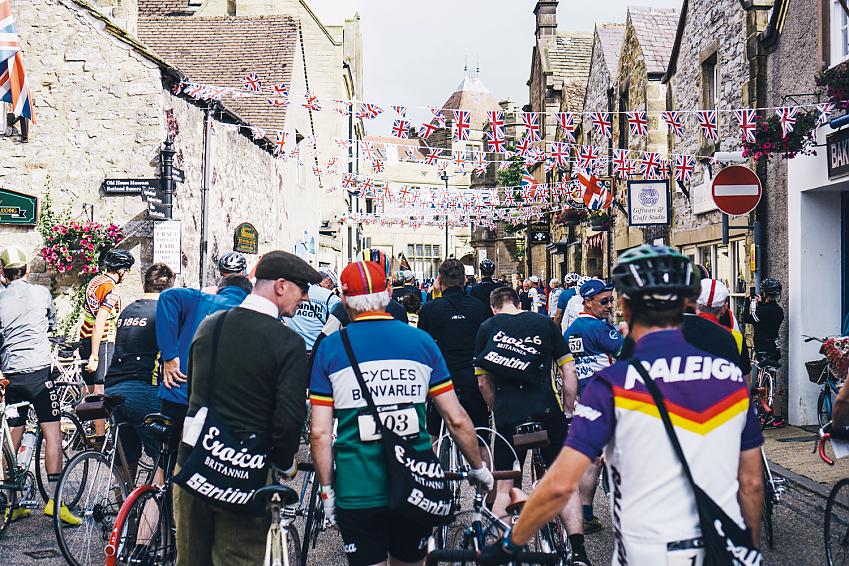 On the other hand, there’s no credible substitute for ‘vintage’ derailleur gears, so anyone wanting to get an older frameset back on the road using contemporary components will have to start looking for them. If authenticity is the primary aim, then the cycle jumble is your best friend. There is a useful calendar of them at campyoldy.co.uk/bike-jumble-diary/. Most cycle festivals will have a selection of sellers exhibiting anything from four-speed Sturmey Archer hub gear axles to rock-hard brake blocks. Finding a rare part can take patience, which is where eBay comes in handy.

Caution! Dimensions are everything when it comes to old bikes. Unless you are replacing like for like or absolutely know what you are doing, be very careful when buying parts such as headsets, bottom bracket components, handlebars and stems and even pedals. The French, British and Italian cycle industries had, at various times, their own standard dimensions for threads and items such as headsets and it is all too easy to buy a part that won’t fit. 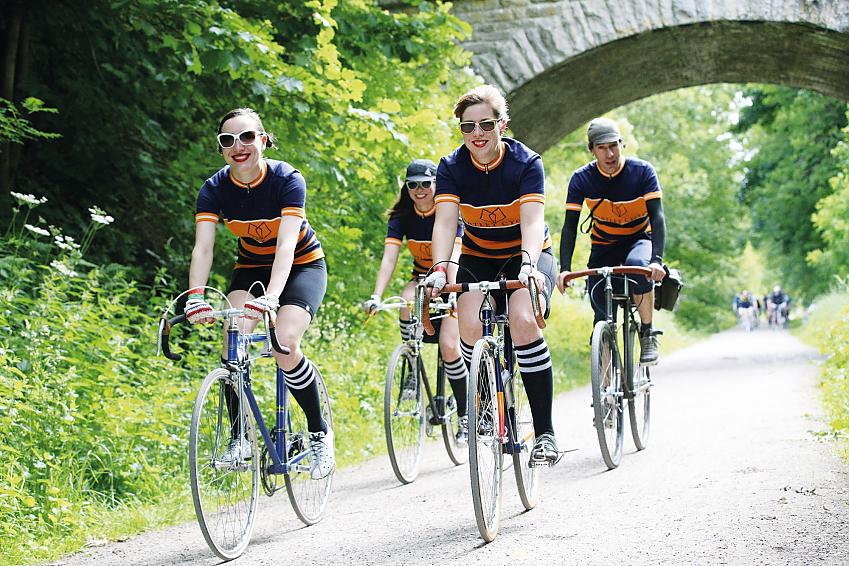 Perhaps the most complete resource for information on this kind of stuff is sheldonbrown.com, where a few hours of browsing will unearth the answer to almost every compatibility query. Life is a little easier when trying to find service items such as tyres and chains. Tyres to fit the classic British 27in and 26in formats are widely available; the former, in particular, are made by Continental, Panaracer, Nutrak and Schwalbe.

For lovers of slightly older machinery, there’s a wealth of information on classiclightweights.co.uk, where informed comment can be found on anything from how to get a Cyclo derailleur gear working sweetly to the accurate identification of Williams chainsets.

When it comes to getting a classic frame resprayed, many paintshops can re-create replica decals and, if not, can obtain them – typically from H Lloyd Cycles.

August / September 2016 View
Cycling UK continues to support the UK to cycle
This remains true during this difficult period with the ongoing threat of coronavirus Covid-19
Read our latest advice on cycling
Join Cycling UK to help us change lives and communities through cycling
Membership gives you peace of mind insurance, discounts in cycle shops, rides & routes
Join now