The women’s End to End record was last broken in 2002 by Lynne Taylor, who set a time of 52 hours 45 minutes 11 seconds. Christina Mackenzie, a 44-year-old former triathlete who rides with Cycling UK affiliate Stirling Bike Club, attempted it in 2019 and became the third fastest woman.

Last year she tried again; this time she beat the record by an hour and 40 minutes. I asked her, when did she start to believe the record was in the bag?

“Arriving in Inverness in the dark,” she answered. “It was three o’clock in the morning, whereas before I was two hours later and the sun was coming up. This time I was crossing Kessock Bridge at night. One of my friend’s sons was playing bagpipes. It was amazing.”

What’s also amazing is that she bought her first road bike in 2012. A year later she rode her first Ironman. In 2016 she moved to Stirling, joined Stirling Bike Club, and switched focus to cycling.

“I hadn’t really done any bike racing at that point,” she commented. “But joining the club, I was encouraged to do the Mersey Roads 24-hour time trial (TT). The longer distances, whether it’s multi-discipline or single discipline, suit me better.”

One of her 24-hour TT competitors was Jasmijn Muller, who had a go at the End to End record. “At first I thought: that’s crazy,” said Christina. “Why would you do that? I wouldn’t drive it! Then seeing Mike (Broadwith) doing it in 2018, I thought: wow, that is amazing. Then I was thinking: 52 hours – it’s two 24 hours and a wee bit more. That could be quite achievable…” 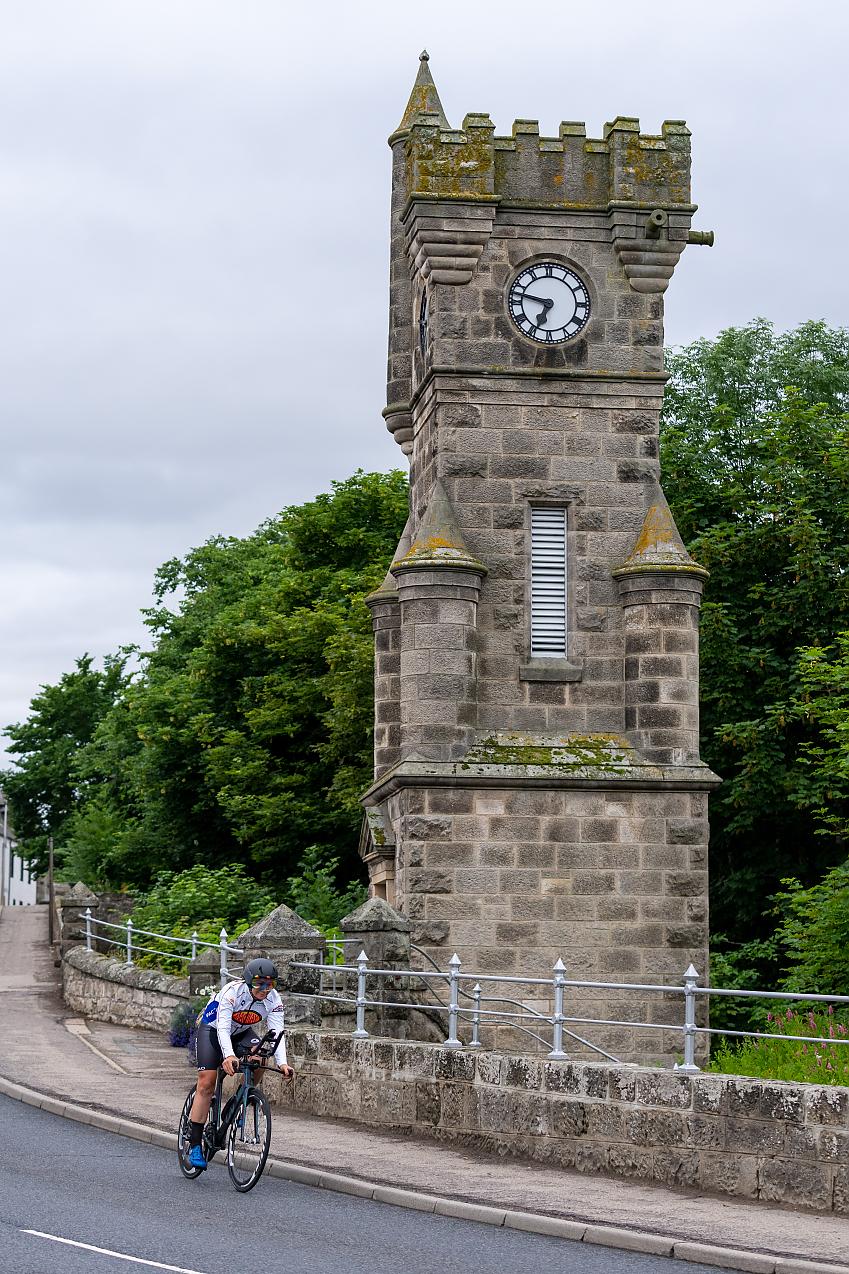 Christina’s bike position was as much about comfort as speed. Photo: Brian Smith

An End to End record attempt gets harder and harder as the ride goes on and time and distance tick by. Christina said she enjoyed the first six hours the most.

“I had a really great tailwind and I was just cruising along the A30. To most people that might be a bit of a nightmare because it’s such a busy road. But between the tailwind and the draft of the cars, I was sitting comfortably at 20mph but still in zone one.

“Mentally the hardest part was when I came into Scotland. You think: it’s great, I’m on the home straight. But I’d still got another 400 miles to go! There’s a stretch from Gretna Green to Abington, a false flat that makes you feel like you’re cycling in treacle. The road surface is horrible and there was a headwind. I knew if I got off the bike at that point I probably wouldn’t get back on.”

The training required to ride 839 miles non-stop is as gruelling as you’d imagine. Six weeks before the record ride, for example, Christina rode three 200-mile training days back to back. Each ride involved 10,000 feet of climbing.

“But it wasn’t just big miles,” she said. “In the build up I was doing hill climbs, threshold training, VO2 max. It was a different kind of pain. I’m normally just an engine that will keep going at a steady pace.”

By chance, Christina’s record ride took place during Cycling UK’s Women’s Festival of Cycling. So I asked her if she had any advice for women starting or returning to cycling.

“Anything is possible,” she replied. “I bought my first road bike in 2012. I’m sitting here in 2021 knowing that I’ve broken a world record. Never in my wildest dreams would I have thought that. But the main thing is to have fun and do what you feel comfortable doing, to enjoy it.”

“It’s a Liv Avow Advanced Pro 2, the 2020 model. It’s all stock but I put custom ski poles (aero bars) on to give more of an angle. Fast Forward wheels: a 60mm front, 80mm on the back. It’s got a hydration system built in to it although I didn’t really use that. I just used the bottle cage at the back with the hand-ups I had.

“The saddle is a Cobb Fifty Five, a tried-and-tested one; I keep that saddle on every single bike.”

Getting inspired at the Scottish Gathering 2022 View