"Good morning... Bad morning.” With these words our new Latvian friends plonked down a sausage and a bottle of vodka next to our stove, where the porridge was bubbling. There was a chill in the early morning air. Mist rose off the river we were camped beside, and a fine coating of dew lay on the tent. Our coffee was brewing. Beyond the haze above, a blue sky promised a beautiful autumn day. But now vodka had been added into the equation…

I’d been tending to our breakfast under Tilly’s watchful gaze when a car had pulled up. Two grey-haired men with moustaches had unloaded a rubber dinghy, then approached with jovial smiles. They had little English and, though we’ve picked up bits of other European languages, we had no Latvian. Luckily, Tilly apparently speaks every language, or at least that of anyone who has food, so she helps us to make friends wherever we go.

With hand gestures, the Latvian men sketched out their plans for a day’s fishing. The sausage was for Tilly, they mimed, the vodka for all of us. Did we have cups? It was 7.30 in the morning. 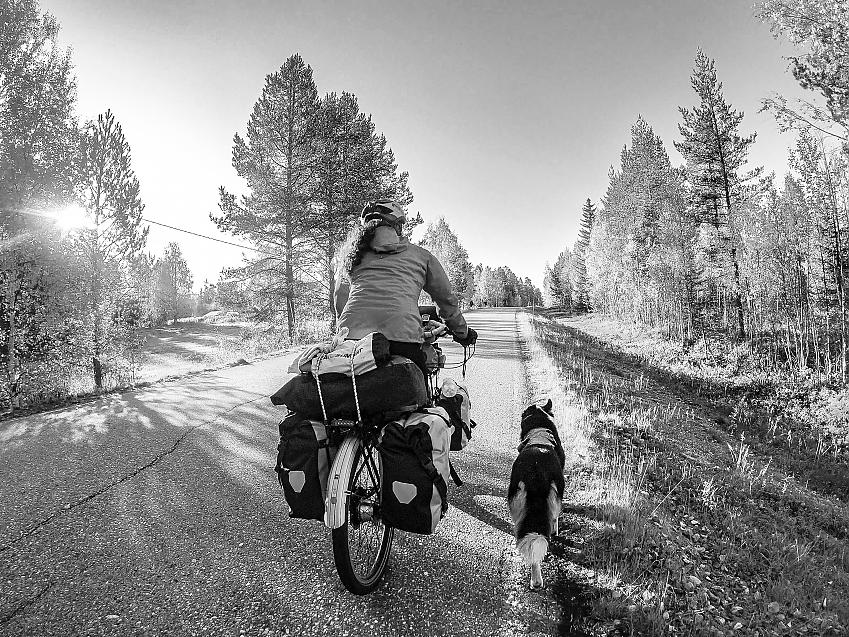 Tilly and Lucy enjoy an evening ride in Finland

Embarking on a journey

Autumn in northern Europe is a special time. With its golden grasses, birch trees, and tens of thousands of reindeer, northern Norway had shimmered spectacularly. As we continued down through Finland, Estonia, and now Latvia, the seemingly endless forest was in the midst of the autumn change. I can’t imagine a better season to experience this part of the world.

That morning, as we feigned sips of vodka, I exchanged looks with Colin and smiled, the question unspoken. How had we ended up here, drinking vodka at breakfast with Latvian strangers?

It all started with the Cycling UK forum. In January 2013, an exchange of messages on the Land’s End to John o’ Groats board culminated in Colin and I arranging to ride LEJOG together, self-supported, in the March of that year. At the time we were living almost 1,000 miles apart, at opposite ends of the route.

We met for the first time two days before setting off from Land’s End. Five years later we were married, with a dog, and about to set off on our cycle touring honeymoon, a trip we titled, ‘Revolutions around Europe’.

Our trip began in May. We left our home in Devon, heading towards London. First we had to deal with the South West’s brutal hills. It was a rude awakening. In spite of our previous touring experience, we had over-packed. In spite of the fact we had been cycling Devon’s hills for years, we had underestimated the particular hills on our route. And in spite of our knowledge of the fickle English weather, we had not anticipated the scorching hot day we were to set off on.

We had arranged to ride the last few miles that day with some friends. We were five hours late meeting them… They had patiently waited, so we enjoyed a gentle sunset roll along easy terrain, stopping at a picnic bench for some celebratory bubbly. As we clinked glasses, however, I wondered if we had bitten off more than we could chew.

Nevertheless, we reached London without incident, having approached the city via canal towpaths. There we had a week of final preparations at my parents’ house. Then we rode the final stretch of our homeland leg to Harwich for a ferry to the Hook of Holland, our gateway to continental Europe.

Anxieties were soon replaced with excitement as the realisation sank in that freedom and the open road lay ahead. We had quit our jobs, moved from our house into a tent, and now carried all that we should need to live on our bicycles for an indefinite period of time.

In the laid-back Netherlands we learned a valuable lesson. Early day excitement fuelled a desire to keep moving at a pace. Worries about seasonal change, months down the line, niggled. Amongst all this, the real value of the trip– immersion in the here and now and the experience of travel – risked being lost. Several people asked, “What’s the hurry?” and we realised they were right. The slower we have since travelled, the richer the experience has become.

On our shortest day of the trip so far we cycled just 11 kilometres. Tilly walked them all. Those kilometres took us up a Norwegian mountain pass. Reaching the summit around noon, we decided this was a unique opportunity to spend a night up high, with an incredible spot to ourselves and the perfect weather conditions for it.

We fetched water from a nearby waterfall, swam and washed in an icy river, and basked in the sun’s rays. In the evening we cooked on a fire, burning broken old snow poles that we found lying around.

The following morning’s glorious descent was blissful. Tilly, as she cruised down the switchbacks, now a passenger in her trailer, clearly enjoyed the ride – head out, ears up. When it comes to riding in her trailer, she is quite the adrenaline junkie. 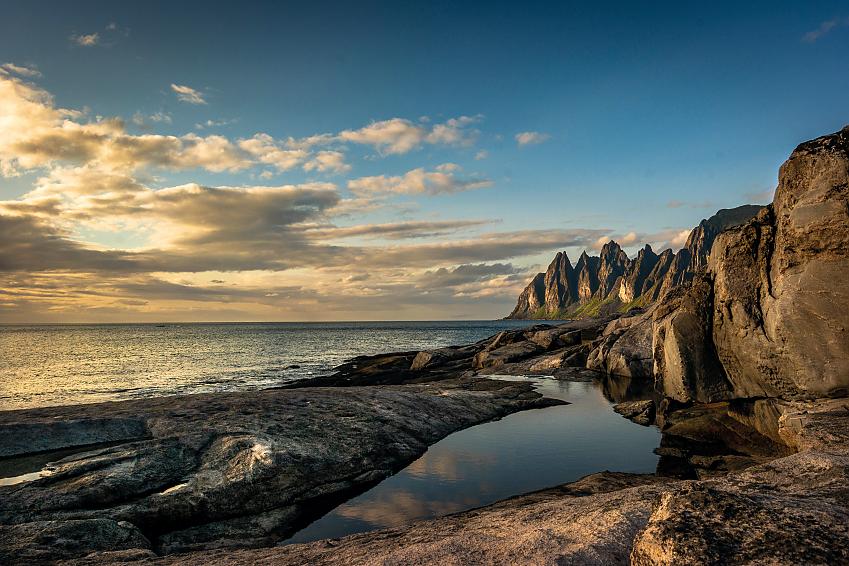 The devils teeth in Norway

Norway was addictive. We ended up riding all the way to Nordkapp, weaving our way along (and frequently plunging into) glistening turquoise fjords, conquering several more dramatic passes, and riding through more than a hundred tunnels, some of which were long, dark, and noisy.

The magical wild camp spots continued to surprise us, and the sense of wilderness was captivating. As we stood at the northernmost point in Europe, looking out across the ocean and knowing that all that lay beyond was the Arctic, it began to sink in just how far we had cycled together.

When we first planned to do a big trip, we talked about riding to New Zealand or from Canada to Patagonia. That was before Tilly came to us “for short-term fostering” after she was rescued. Three years later she was a permanent family member. Technically we could still have done the Americas trip, but it would have been expensive and stressful to fly with her.

Continental Europe was an idea we had overlooked, on the misconception that we needed to go somewhere more exotic to have a big adventure. Planning a trip with Tilly in mind gave us the inspiration to consider a tour of closer to home instead.

It turns out that Europe is incredibly varied, diverse, colourful, and interesting. We have already experienced vastly varying landscapes, climates and languages, and have been able to learn more about familiar aspects of history from different angles.

Travelling at this speed and in this way allows you to pick up on subtle changes as you pass through each country and into the next. Travelling with a dog adds another dimension. People delight in seeing Tilly in her trailer, and we are frequently photographed as we pass people by. Ever wondered what it feels like to be a celebrity? Go cycle touring with a dog and ride through a tourist hotspot in high season, you’ll get the idea.

Travelling with a dog adds another dimension. People delight in seeing Tilly in her trailer, and we are frequently photographed.

We have been surprised how easy it is to cycle tour with Tilly. Warm showers hosts have generally been happy to accommodate us, and many have really enjoyed having a furry guest. Hostels, restaurants, and even some museums have been surprisingly dog-friendly.

Tilly, the trailer, and all her kit and food add weight and drag, but it’s amazing what you get used to. We just adapt our distances and expectations. Tilly walks up most of the hills and enjoys the freedom of the trails when we are off-road, which we aim to be whenever possible.

As we watch her play with countless other dogs, through every country we visit, we are reminded that language barriers need not get in the way of making connections.

Cycle touring with our 'borderless' collie has enhanced our trip in ways we could never have imagined. 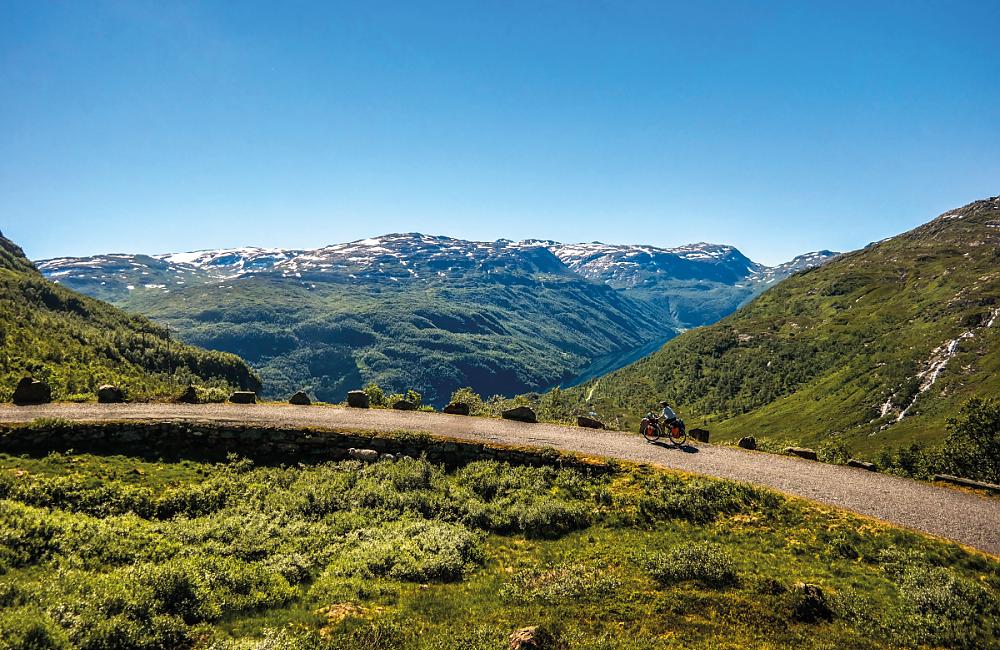 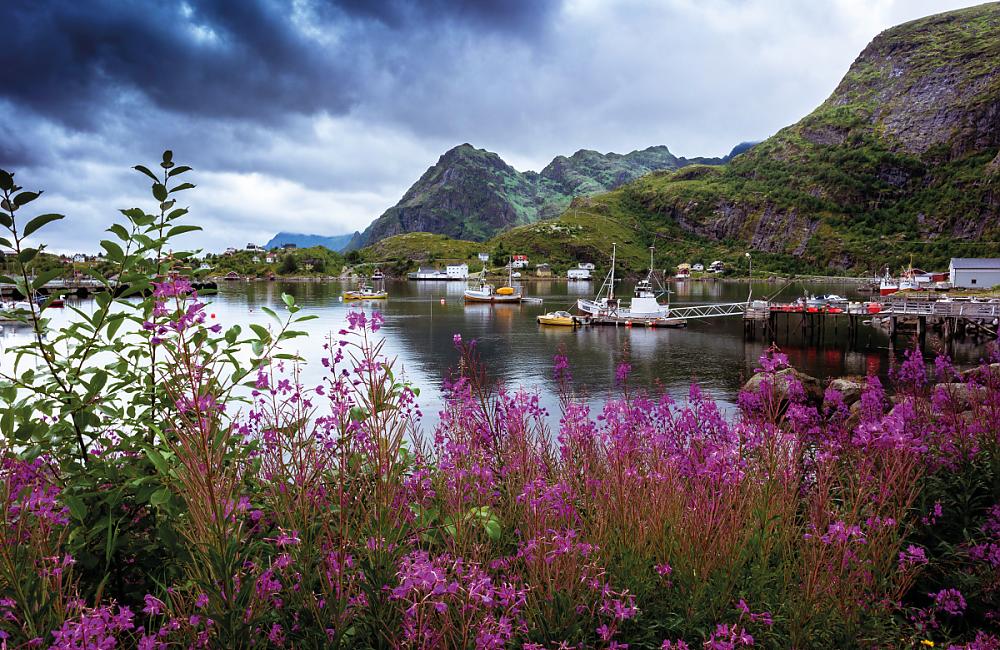 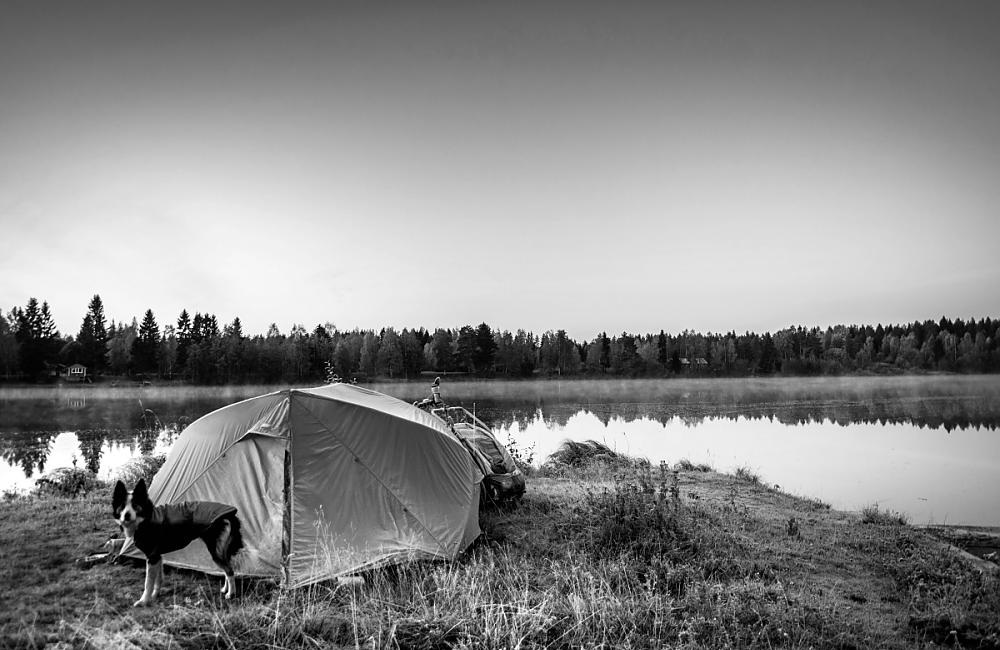 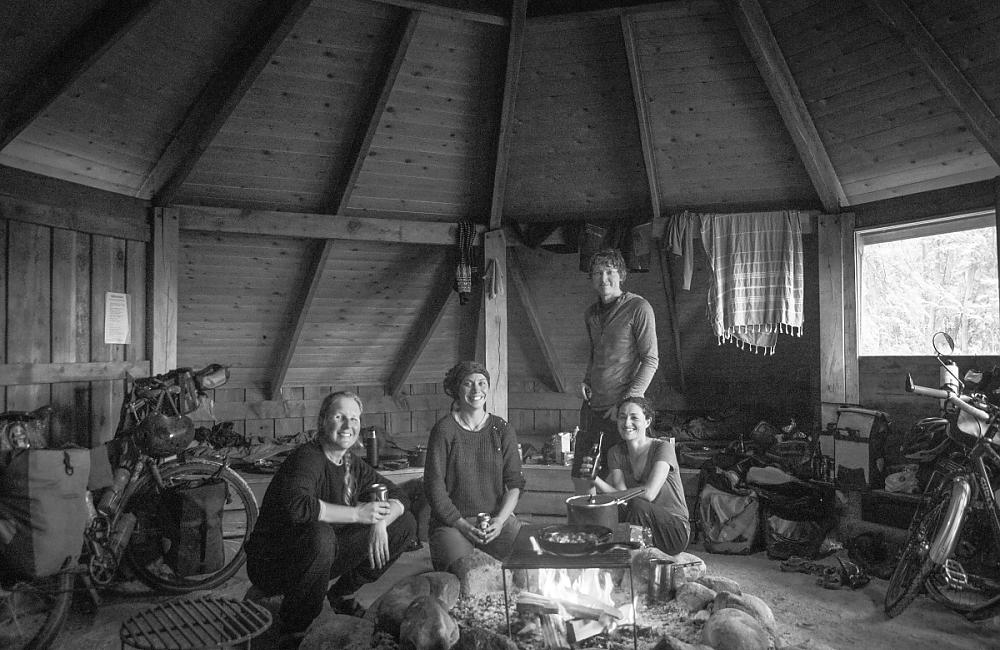 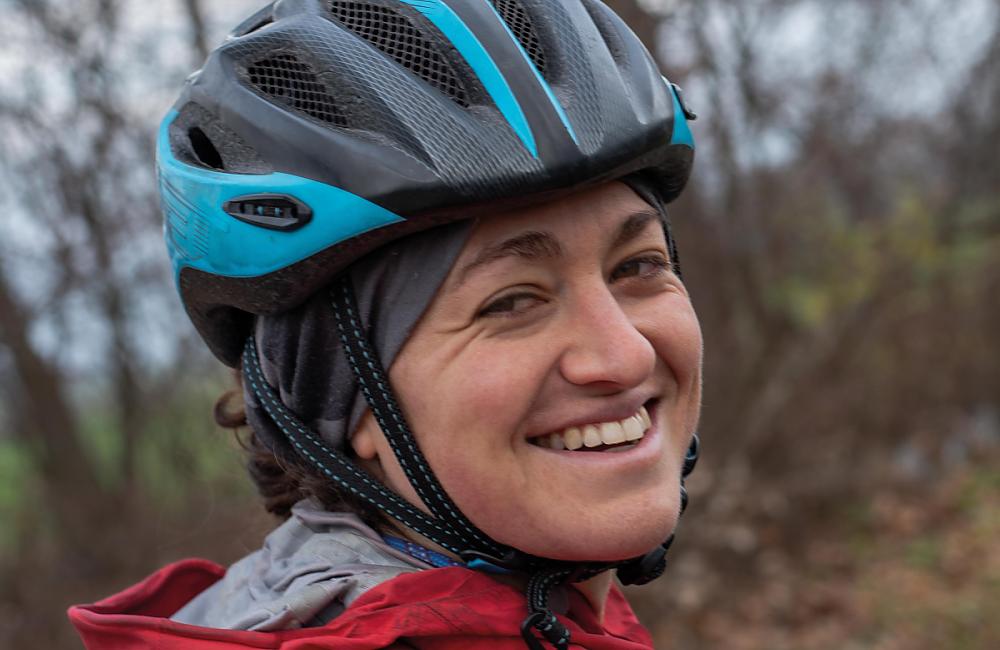 A woof guide to taking a dog

Take your dog with you: they and you will love it. You get to be together 24/7, rather than leaving your pet behind.

You’ll need dog transport, such as a cycle trailer. There are varying rules when it comes to bringing a pet into a country, such as the pet’s passport and vaccinations.

Camping with a dog can mean early morning face licks and potential tent damage if they get over-excited or scared.

Some accommodation and hosts may not accept pets but generally we have been pleasantly surprised.

You will go slower due to extra weight and trailer drag, although this can be a benefit.

You will attract lots of (generally positive) attention. You’ll need to carry dog food; we have a dedicated drybag that’s filled up at pet shops. You’ll need plenty of kit for your dog too. Weather extremes can affect dogs badly, so check forecasts and plan ahead. Don’t forget to do a trial run with your dog before setting off.

Fact file Around Europe with a dog

Conditions: So far mostly sun and heat with a with a plummet to sub-zero in Finland and an Indian summer through the Baltics.

Maps/guides: Word of mouth and Eurovelo maps for broad planning, and then mainly GPS navigation using a mixture of Google Maps and Open Street Maps.

Next time I would… Get a husky that could pull us instead! Start off slower. Hike up a Norwegian glacier.

A 70-mile ride by the Mapledoram family and their Alsatian.

LEJOG was the start of Lucy & Colin’s journey. To book a guided and supported E2E, visit cyclingholidays.org.