In search of domestic adventure, Ben Harris and two friends headed for Cumbria to take on Britain’s highest tarmac road

The pandemic put our foreign touring plans on hold. Normally the three of us would be anticipating Alpine cols or mountainous islands. Last summer a short staycation was the only option.

Lockdown had eased and we could cycle together. The question was: where? In the search for ideas, card game Pro Cycling Trumps Climbs Edition came up, as it were, trumps: Great Dun Fell. At 848m it’s the highest tarmac road in the UK.

We plotted a route that looped through the Yorkshire Dales before arriving at the foot of the climb to the Cumbrian radar station that’s the reason for the road. We planned to ride from our own front doors and meet en route – a change from airports and train stations, and a thoroughly low-carbon experience.

“Are you packing waterproof trousers?” I asked the others. “I think it’s a good idea. It is England.”

On day one it was 20ºC by 8am. I had waterproofs in my bag. Perhaps I’d overpacked? I was pleased, however, that I’d added a third bottle cage. As I made my way along familiar north Nottinghamshire roads, I began thinking where I might find water throughout the day.

Bradford and Skipton rolled by. At Gargrave I passed a stone marker indicating the Yorkshire Dales National Park. I was on schedule for a 4pm rendezvous with Mike in Settle. Then the bike started to feel sluggish. “Not a puncture?” I thought. I looked down at the front tyre – a big drop of sweat splashing onto the top tube – and then the rear. Both looked in good shape. The problem was the road: the tar on the country lane was melting so badly that I was leaving a small furrow on it. 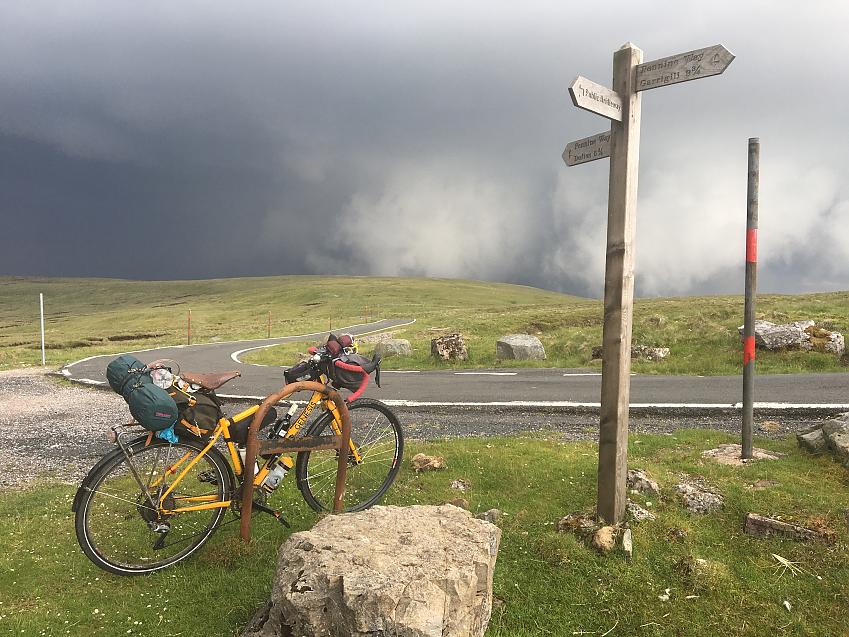 It’s exposed and bad weather can soon sweep in

The first significant climb came after the village of Airton. By the top of Scosthrop Moor, I had empty water bottles and almost empty legs. I didn’t really take in the sweeping views across Yorkshire as I was now anxious about how late I was going to be. I need not have worried: a 20% descent, cobbled in places, launched me into Settle at blistering speed. I spotted Mike across the square as I was finishing a celebratory ice cream. We greeted each other with an elbow tap. It was five past four.

More melting roads took us to Ingleton, where we picked up Gordon – and large amounts of various drinks. The heat finally eased a little.

We headed north from Ingleton, looking for a place to bivvy. It didn’t take long to find a secluded area of grass on a ridge overlooking the stark grey slopes of Ingleborough. After setting up camp – leaving nothing but flattened grass – we toasted our trip and our bivvy spot, then enjoyed a dry night under the tarps.

Our heads were hazy the following morning. Thankfully, so was the sky. We packed and pedalled gently along the gated road to Dent. Traffic was non-existent. It felt like our own private introduction to proper Dales scenery. The grass was lush in the valley, and the cows and sheep looked to be making the most of it.

We had a rollercoaster ride to the sleepy village of Dent. Takeaway coffees cleared our hazy heads but the sky was darkening. Heavy grey clouds scattered drops onto the street and there was that lovely smell of summer rain. We took cover in a bus shelter, then realised it wasn’t a passing shower. 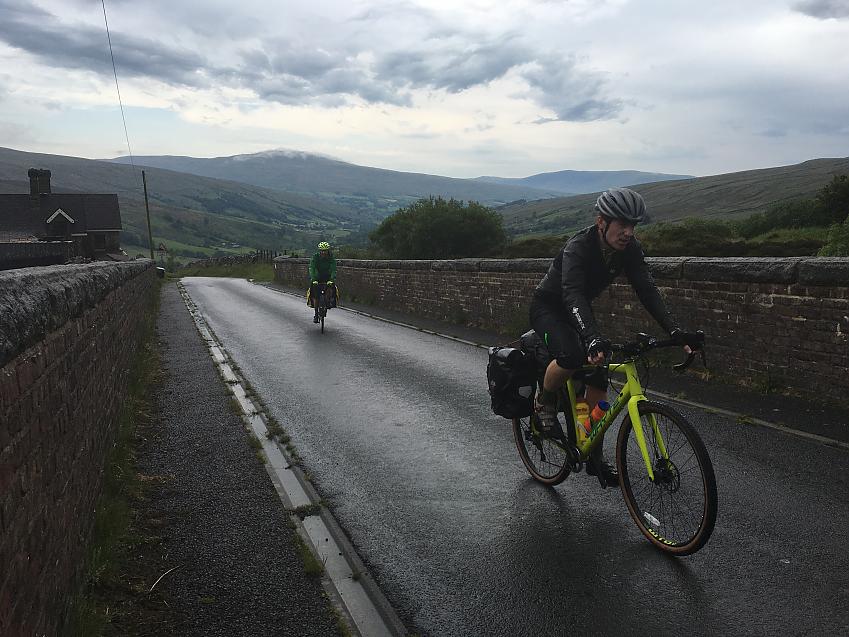 At least the rain kept us cool as we pushed along Dentdale, then up the steep climb to Dent Station. The Settle to Carlisle railway line is one of the UK’s most scenic, clinging to the hillsides and crossing multiple viaducts. Finally the rain stopped and we could enjoy the view down to Garsdale Head. Coming the other way, it’s one of Simon Warren’s 100 Greatest Cycling Climbs. Going down it, we smiled ear to ear as we hit speeds of over 45mph.

As we followed the Settle to Carlisle line north towards Kirkby Stephen, having been passed by one car all day, a steam of ten overtook us. Aston Martins, a Bentley, a Lamborghini, a Ferrari, a couple of Porsches and more, all blurred by with throaty roars. There must have been several million pounds worth of supercars. Then it was business as usual again: we had the road to ourselves.

Eating sandwiches outside Kirkby Stephen, we had our first glimpse of the tiny white ball of the radar station at the summit of Great Dun Fell. It looked impossibly far off.

Although modest by European standards, Great Dun Fell is a serious climb. It’s 848m high and 7.2km long. The average gradient is 8.6% but that includes ramps of 20%. It’s exposed to the elements.

As we began, the strong late afternoon sun beat down. Tops unzipped, one water bottle each empty, we were drenched in sweat by the first cattle grid. It felt like the white dome was almost within touching distance. Mike’s computer told us we still had several kilometres to go, however, and that we hadn’t touched the steepest bit yet.

I joked that the clouds were darkening and that we might have a shower to cool us down. Though the sky was still 90% pure blue, we came across two-metre snow markers around the next bend. They were reminders of the harsh weather that this high road must see.

The road cut through a narrow gorge and ramped up. I bounced on the pedals in first gear, lungs straining, until the gradient slackened. The final switchbacks to the summit appeared ahead with the sun behind them. It looked achievable. 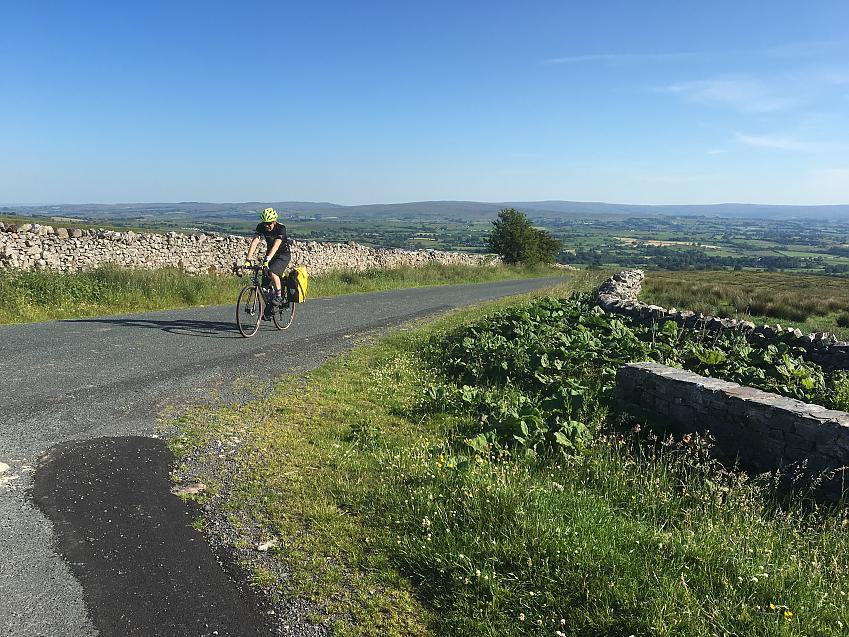 Then I turned back to look at the view behind. Dark clouds were quickly gathering and the wind was strengthening. My bike computer still read 26º; a shower wouldn’t be so bad, I thought.

Somewhere in the last kilometre or two, with us strung out about 50 metres apart, the last patch of bright sky disappeared. A ferocious blast of wind knocked me sideways across the road and the first few fat drops of rain began to fall.

Within seconds, the wind whipped up into a gale and the refreshing rain started to sting. Marble sized hailstones peppered us through our thin lycra. This was ridiculous!

I jumped off my bike and rolled into the ditch at the side of the road. Behind me, Mike and Gordon were doing the same. I struggled into my waterproof jacket, rapidly numbing fingers fumbling with the zip, and curled up into a ball for protection.

Some time later the pelting eased into normal rain. Mike and Gordon pulled up alongside, half laughing and half shivering. It had been a bonkers quarter of an hour. We were now relishing the final dig to the summit simply to generate some heat. I had a wry smile as I triumphantly donned my waterproof trousers!

Sheltering from the wind behind the dome, I unpacked my stove and made us hot drinks. As we sipped them, we looked out across England from its highest spine, a rainbow brightening the sky. To the west, the Lake District came into sunlit focus. Eastwards we traced the origins of some of our greatest northern rivers: the Tees, Tyne, and Wear.

We had planned to press on off-road along the Pennine Bridleway to a bothy on Cross Fell, the true high spot of these hills. But with the sky still changeable, we agreed to leave it until next time, whenever that might be. A second night’s bivvy and we’d be heading our different ways home.

Do it yourself: Weather to ride

This ride highlighted the extreme variation in conditions in the UK even in high summer. For remote cycle adventures it’s worth considering the mandatory kit list specified by the Fell Running Association for their events. This includes: full waterproof body cover; a hat; gloves.

As a rule, any two of wind, rain or cold air can be rapidly dangerous if you are exposed. When the temperature drops below 10º, particularly if wet, it can be hard to change gears, pull brake levers, or even just grip the handlebar. I always take full-finger gloves.

Distance: About 250 miles for me from home in Nottinghamshire, over three days.

Route: Rendezvous in Settle, then to Ingleton, Dent, Garsdale Head, Kirkby Stephen, Appleby, and finally the big climb. Then home via York.

Getting there: We cycled there but Appleby in Westmoreland is the nearest train station.

Equipment used: I rode a Genesis Vagabond and carried luggage in a Carradice Lowsaddle Longflap.

I’m glad I had…Carradice saddlebag, which made me pack more carefully than I would with panniers. It also meant I carried less of our tea up a very steep hill!

Next time I would…Keep the UK much higher up the list for future bike adventure plans.