The Great North Trail is one of the UK’s longest off-road routes. Cycling UK's Cycling Development Officer for Tyneside, Jordan Matthews planned to do it in ten days during the summer of 2020

The pandemic put an abrupt end to my round-the-world cycle tour, so I’ve since been exploring the UK. Last summer it was the Great North Trail, which traverses some of Britain’s best scenery on a mix of singletrack, bridleways, gravel roads, and tarmac ones. I planned to do it in ten days, most of it on my own. But for the first two days I was joined by a friend.

Neither of us, it turned out, had a quick-link. We discovered this in the first hour of day one. I snapped my chain on a grass-in-the-middle bridleway in sight of the Dark Peak. As I removed a link and rejoined the chain, hoping it would hold until I could repair it properly, I kept muttering: “Everything in our stride.”

Longer trips seldom go exactly to plan so you’ve have to roll with it. Later the same day we found ourselves caught behind a herd of cows, slowly trudging to be milked. Our average speed plummeted, making my daily mileage target look ambitious.

Sometimes the animals gave way to us instead. Riding up Cam High Road in the dark, two dots reflected our lights, then two more. They darted off the track as we got closer. Sheep! The off-road descent in the dark to our overnight stop in Hawes was thankfully sheep free. From there on I was riding solo. 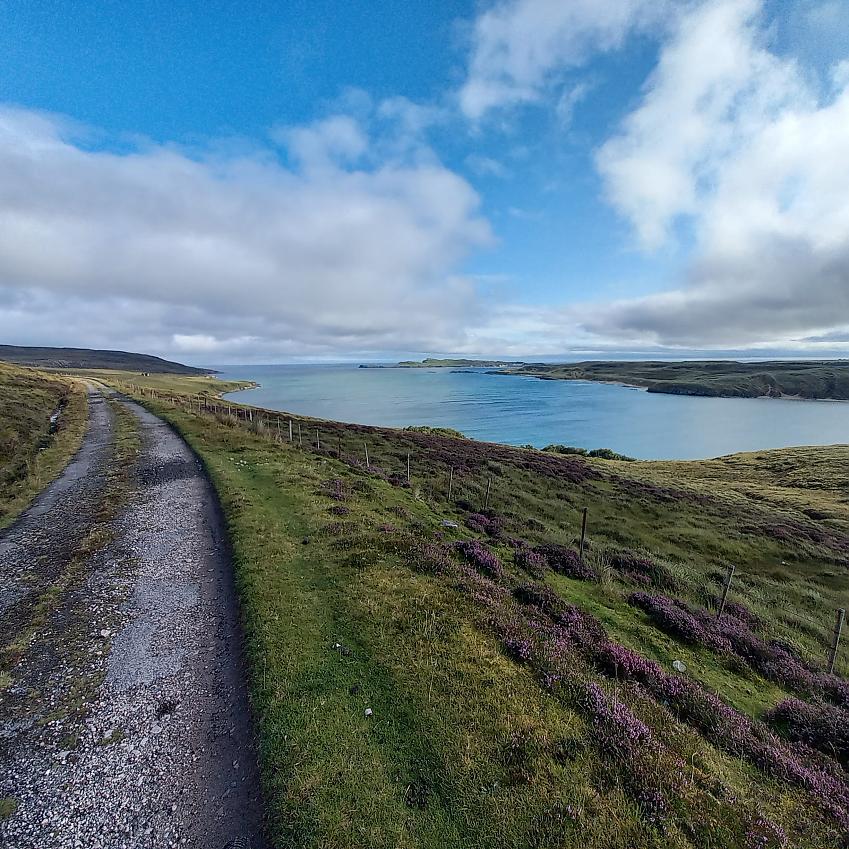 Kyle of Durness near Cape Wrath

Strangers in the night

Appleby was the next stop of note: more animals, in the shape of a horse and cart parade. I’d arrived while Appleby Fair was on. Never having seen it before, I sat on a bench in the centre of town to take it all in. I pushed on when the smell of manure became overwhelming.

I was soon alone again, pedalling through the North Pennines, then Kielder and the Borders: up sunny inclines, down descents, through bogs, on forest tracks. Pedalling into the sunset, near the top of Minch Moor above Innerleithen, I had an unexpected encounter as I looked for a place to camp.

A stumbling man approached me, leaning on poles. “I’m pleased to see someone!” he panted. He was taking part in the Race Across Scotland Ultra Running Race. I wished him good luck, pitched my tent, and settled down for the night.

I was woken by lights on the flysheet. Voices, coming closer. What? It was 1:30am. Then the lights and voices faded. It took a while to click: more ultra runners. I checked the GPS tracking site of the event on my phone: at least one runner had just come right past. The fear of the unknown had gone. I nearly unzipped my tent to cheer on any others. But I was tired, so I went back to sleep. 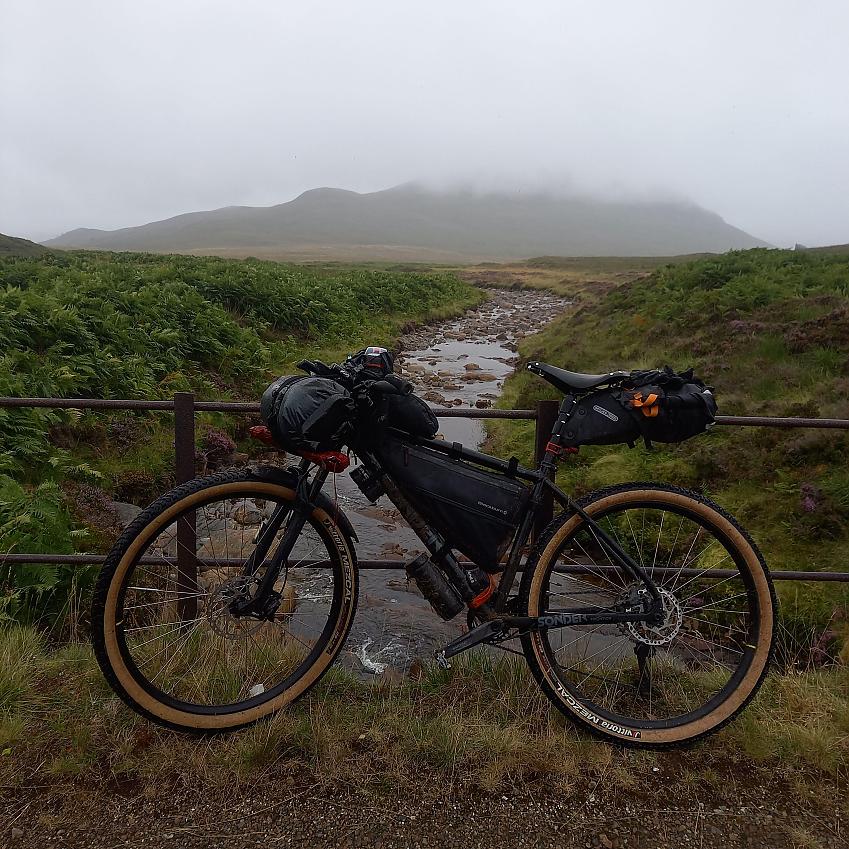 By the time I reached Glasgow I was a day behind my schedule. I’d underestimated quite how ‘offroad’ some of the off-road sections of the Great North Trail are. I reminded myself that it wasn’t a race, and that I’d given myself two days leeway at the end in any case. I’d take my time. Literally as I was thinking this, the sun came out.

After Drymen, I left the hiker-populated West Highland Way and cycled into the solitude of the Loch Ard Forest. Gliding over smooth gravel tracks, the sun popping through the gaps in the trees, I was overwhelmed with a feeling of tranquility. I didn’t see a soul until Aberfoyle.

In Killin, I bumped into a couple of bikepackers at the place where bikepackers invariably encounter each other: the public toilets. Bikes loaded like mine, they were doing the Great North Trail too. We compared route experiences for a while, then they pedalled off to find a place to camp.

I started to ride out of the village too, but then: what was that smell? A fish and chip van! I couldn’t pass up the opportunity, and I’m glad I didn’t. I found a nice place to camp close to Loch Rannoch but had to quickly zip myself in to keep the midges at bay. Cooking would have been miserable. 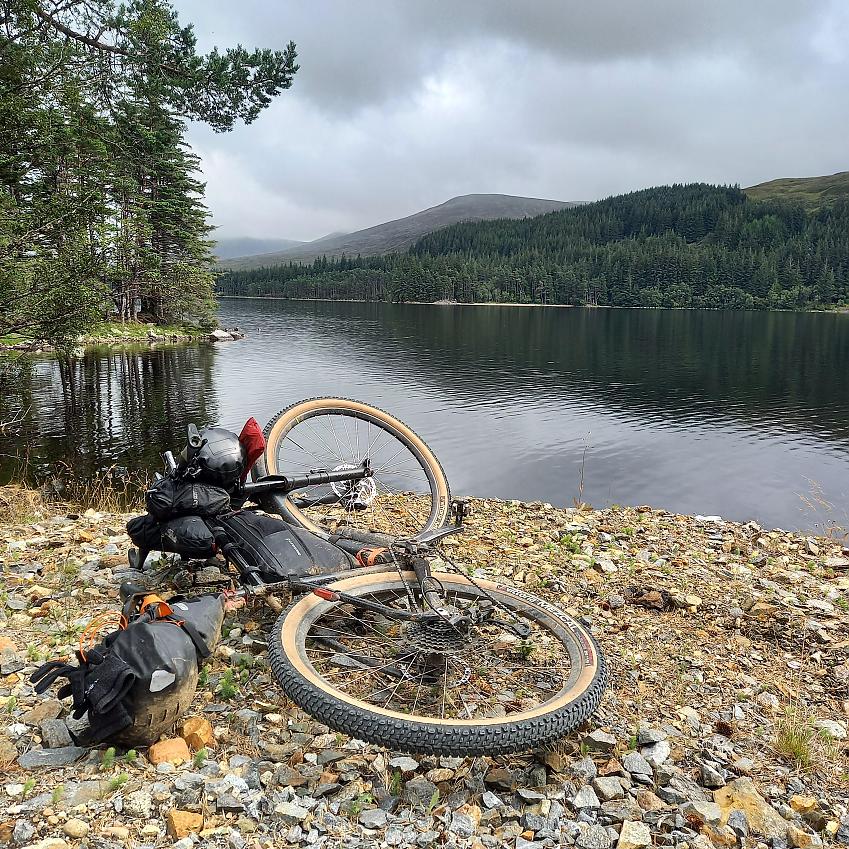 The remote trails remained quiet. I startled a walker by ringing my bell. He hadn’t seen anyone all morning and had thought he was alone. Later I spied two figures in the distance. Getting closer, they turned out to be very damp-looking cyclists on road bikes, off-road, wearing what I’m sure were Hawaiian shirts. Was I hallucinating? Maybe I had spent too long on my own…

Skirting past Loch Ossian, I arrived at the Corrour Station House. Only accessible by train, a 20-mile walk, or by bike, the Station House is the UK’s remotest restaurant with rooms. I spent a happy hour there, refuelling and hiding from the midges. From there, fast, rolling tracks took me north towards the Corrieyairack Pass. The enjoyment available is all on the descent.

The Northern Highlands beckoned. As I set off up an early morning forest track with an almighty gradient, I found myself yet again grateful for the bike’s bottom gear. It had been overused on this trip.

By now I’d ridden 600 miles of the Great North Trail and had around 150 to go to reach Cape Wrath. I had two days to do it in. It looked achievable, so long as there were no mishaps.

I was feeling good. After eight days on the bike, I was finding my rhythm. Perhaps I was too overconfident, taking risks on the rougher parts of the descents, riding as if I weren’t fully loaded. That’s all it took. The rear tyre suddenly felt soft. I stopped. Air was escaping from a big hole in the sidewall. My hopes also began to deflate.

The hole was too big for tubeless plugs, I discovered after two failed attempts. So I removed the tyre and fitted a tyre boot and a spare tube. Riding gingerly, I reached a road after a few miles. Next aim: a new tyre. 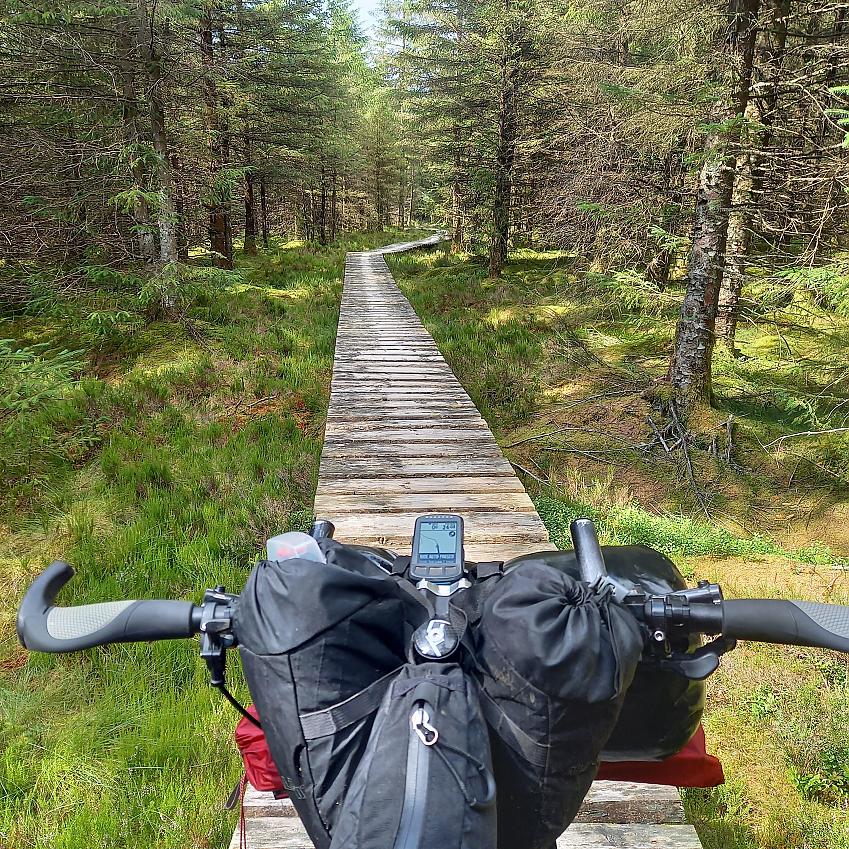 Leaving the Great North Trail, I went to Strathpeffer in search of a bike shop. Strathpeffer hosts an annual 24-hour mountain bike event. Surely I’d be able to source a spare tyre here? No joy. I tried all the bike shops in a ten-mile radius. Still no joy.

By then it was early afternoon. I reckoned I had three choices: one, continue along the Great North Trail Route with the hole in my tyre – I might get there or I might end up in a worse situation than before; two, ride back to Inverness on the road and get a train home; or three, continue to Cape Wrath on the road.

The late Mike Hall, ultra-endurance legend and founder of the Transcontinental Race, once said something along the lines of “never quit at night”. I decided to get a cheap hotel and sleep on it.

Cape Wrath on road it was. I spent the first 20 miles annoyed and frustrated. Then I found myself on a lovely singletrack road alongside Loch Shin. I knew then I’d made the right decision. The plan was to reach Cape Wrath, and I still had time to do that. Adaptation would get me there, even if it wasn’t going to be on the official route.

Later in the day, I hid under a tree to escape a downpour. Out on a loch, I saw three men in a boat, fishing in the heavy rain. I’d thought I had it tough, yet it looked like they were having a great time. I got back on the bike.

Cape Wrath day! I’d read that the timings for the ferry across the Kyle of Durness were very ad hoc so I left early, catching the first crossing sometime after nine. On the cape I was passed by the two cyclists on e-bikes who had taken the ferry with me, then by a minibus. Then I was alone until I reached the end of my journey: the lighthouse, standing in the mist.

There were a few tourists walking about, so I asked one to take a photo for me in front of the lighthouse for the Cape Wrath Fellowship. I stared out to sea, reflecting on the past ten days, then turned, mounted the bike once more and, for the first time in a week and a half, headed south. 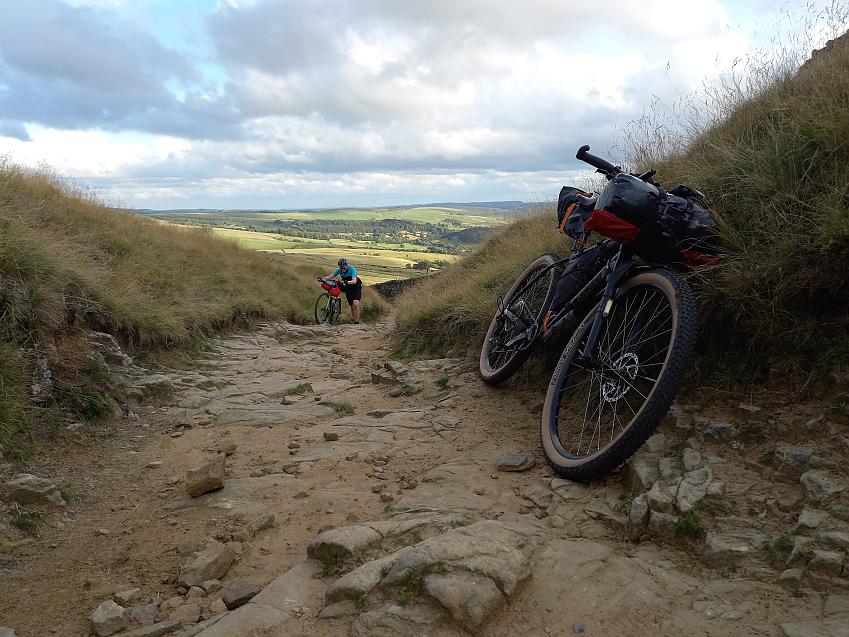 Cycling UK is indebted to the Obscura Mondo Cycle Club for developing the An Turas Mòr off-road route between Glasgow and Cape Wrath. It runs for 354 miles from the Central Belt, through the Scottish Highlands, to the country’s north-western tip. It takes in hill tracks, drove roads, forests, and mountain passes – and it’s an integral part of the Great North Trail. It’s a physically demanding route, by itself or as part of the Great North Trail, but it’s not technically demanding. It can be ridden on a gravel bike, not just a mountain bike.

Riding the Great North Trail is a fantastic adventure but the truth is that the route isn’t perfect. Sometimes, an ideal connecting trail is designated as a footpath rather than a bridleway, so the route has to take the long way round and include a road section to link things together.

Some of these examples are absurd – like a four-metre wide gravel track in the North Pennines, used by 4×4s but with no access for cycling. Cycling UK is continuing to campaign to close these gaps and improve the Great North Trail.

If you can think of similar off-road missing links in your area, add them to our map and ask your council to prioritise them in their rights of way plans.

Route: Don’t underestimate the first half of the route and the distances achievable in a day. A lot of it is slow going with gates, steep inclines, and rocky terrain.

Conditions: Mostly dry apart from a couple of days. Be ready to have wet feet even if it isn’t raining from dew on long grass and river crossings.

Maps: Wahoo with GPX files. I’d also download the route on Komoot on my phone, and had a PDF of the route guide on my phone. This was handy to see resupply points for the remote sections.

I’m glad I had…Front suspension for the first half of the ride. A tent to make the most of wild camping in Scotland.

Next time I would…Take a spare tyre. Take twice as long.

Getting back: The minibus from Durness to Inverness carries four bikes.