Great Rides: The Black Forest with an electric bike

Great Rides: The Black Forest with an electric bike

A piece of cake, Germany’s Black Forest is as hilly as it is picturesque. It’s ideal for a short cycling holiday on an e-bike, as Rob Ainsley discovered.

Germany must have more top-class long-distance cycle routes than any other country. One website lists over 150, from selfie-generating blockbusters such as the Danube Path or Romantic Road, to quirky trails such as the Frog Route, Football Route, or Cabbages & Turnips Route. And now there’s another. I just did a new circuit through the Black Forest – the home of gateau, cuckoo clocks, and a lot of trees.

It was three days of Germanic feel-good: village festivals, tranquil forests, half-timbered market squares, and naked swimming. It involved the consumption of a few local beers, a paving stone of gateau – and 1.2kWh of electricity. Because I did it the German way, on an e-bike.

They say power corrupts. Not with e-bikes. They’re great fun, and are the leisure norm now in Germany. Well over half the town trundlers, day-ride couples, and full-face-helmet MTBers you see plying the excellent cycle paths are battery-assisted.

Rob not working up a sweat

The decision to rent one for the long-weekend trip made itself. I flew R***air to Stuttgart, and would have been charged fifty quid each way to take my own bike – far more than the fare itself. So it was cheaper and easier to hire a bike from my base, the spa town of Bad Liebenzell, two hours’ train ride from the airport.

The hot-spa/wellness thing is a big part of German culture, so I spent the first evening in the typical local Therme. There was the Bad section – large pool, small pool, whirlpool, outside pool, sauna, steam room, lemon room, ‘bio’ cool-vapour room with a mineralised tree like a fairy grotto, and ‘experience shower’, a kind of car wash for people. Then there was the Sauna section, with more saunas/steam rooms/ pools/experience showers, but textilfrei: naked. I swam outside under the stars, unencumbered by my M&S trunks.

After a hard day’s cycling, an evening in a German spa makes you feel relaxed, refreshed, zingy. Do it textilfrei and you feel, well, zingy all over. Especially after the experience shower. The only problem was, I hadn’t actually done any cycling yet.

‘Continental breakfast’ is a borderline term of abuse in Britain, but here it’s the real deal – and activity-friendly, fuelling but not bloating. Gloriously fresh, tasty bread rolls, doughy and seeded. Full-flavour local butter, hams and cheeses. Rich endless coffee. Egg boiled lusciously to order. Germans love quality, and from the crispy bacon to the regional jams, it’s all quality.

But I still hadn’t done any cycling. So, time to set off, into sheer delight, along the Nagold valley, on a smooth, wide, car-free riverside bike path. It would be something special in England but it’s standard here. In Calw-Hirsau I passed a statue of a naked woman doing a joyful motorbike wheelie, oblivious of the monastery beyond. Perhaps she was feeling zingy all over after her experience shower. 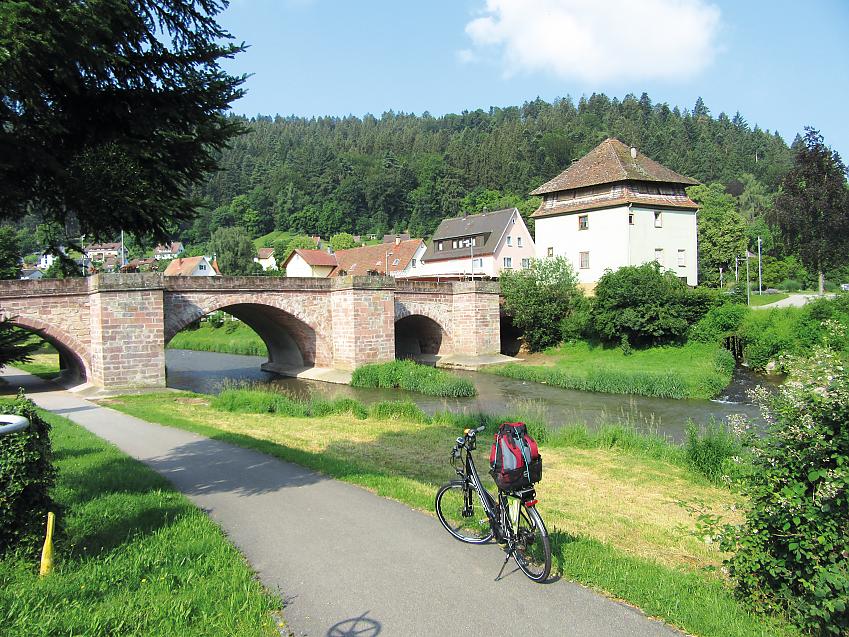 Calw market square was a picture, a dazzling collection of half-timbered medieval houses like some giant op-art canvas. Bustling stalls were selling bio and eco things, asparagus and fruit and preserves and wine, and the produce looked as sturdy and attractive as the buildings.

A few flat kilometres further on, as I entered the town of Nagold, a tell-tale sound floated on the breeze: a band doing 1980s pop covers with a chunk of oompah. Aha, a Fest! Weekend summertime Germany buzzes with such parties. There’ll be marquees, stalls, live music, beer, sausages, potato salad, cake, and a lot of happy people.

All for very worthy reasons, of course. Celebrating the 37th anniversary of the knitting circle, or the opening of the new municipal drinking fountain, perhaps. If you need another excuse, shops generally close on Saturday afternoons and all Sunday. So if there’s no big supermarket handy, you may have to eat and drink at a Fest. 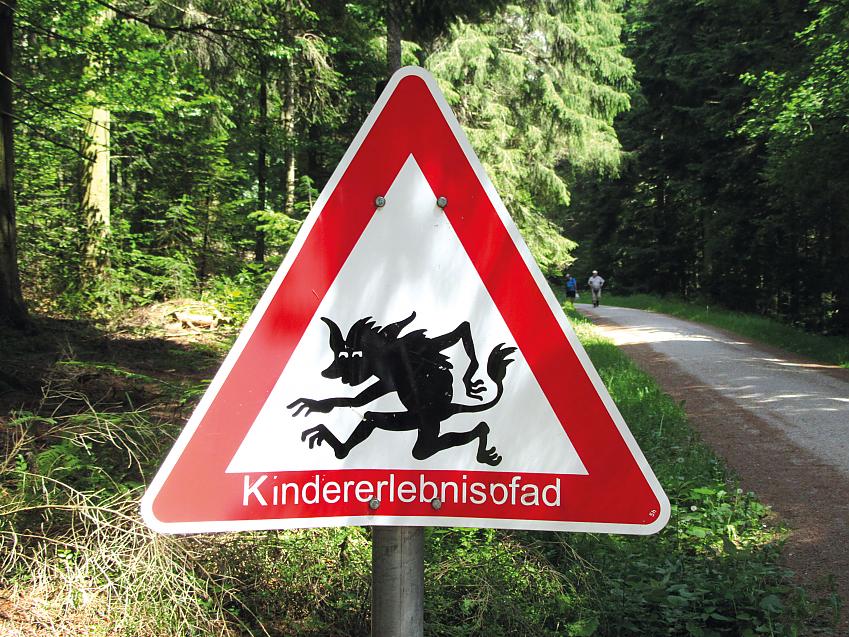 My rigorous schedule became a little less rigorous after a local Pils in the sun, chatting to locals. A few forest tracks later, things took a turn for the British: it started to rain. As I had expected, the guesthouse had provided its own daily newsletter with a detailed forecast of 3–5 l/m2 of rain at 2.15pm, and a Niederschlagswahrscheinlichkeit – ‘rainfall probability’, Google Translate helpfully confirmed for me – of 79%. They were spot on. It turned torrential, the roads awash.

I sat it out in a bus shelter, eating lunch. It was just like being at home. Another rain-dodger joined me, a bloke with a bike stacked with shopping, and worked his way methodically through three cigars. (For a wellness-obsessed nation, they don’t half like smoking.)

The rain eased, and so did I – into Altenstein, a Brothers Grimm vision of jauntily-coloured medieval houses stacked up round a hillside like a kids’ pop-up storybook. There was a theme to my evening’s accommodation, the Stag Guesthouse: a golden stag sign; deer heads on the walls, a reminder of the still thriving hunting culture; local venison in poached pear sauce for dinner. The waitresses were in traditional dress – not merely an image exercise, like Bettys cafe in York for instance, but what many people routinely wear ‘for best’ in southern Germany.

A German cyclist also dining alone bought me a comradely schnapps, came over, and we talked bikes and life, and agreed about everything. My battery pack got a full overnight recharge, as did I, with the sound sleep that follows a fabulous day’s cycling.

The Black Forest is networked with countless trails. Think ten Kielder Forests, with better signage, more and better tracks, and umlauts. Day two was a scorcher but the woods were shady and cool. The panorama from the top of the Hohlohturm – a 19th century observation tower at the end of a quaint wooden track – was astounding. It’s nearly a thousand metres up, a long, long steady climb that would be tedious on a manual bike but straightforwardly enjoyable thanks to e-assistance. (The settings are Off, Eco, Tour, Sport, and Turbo; this was Turbo.) Further on, at Sonnenberg, was a giant treetop walkway, offering more vast views down over the forests. 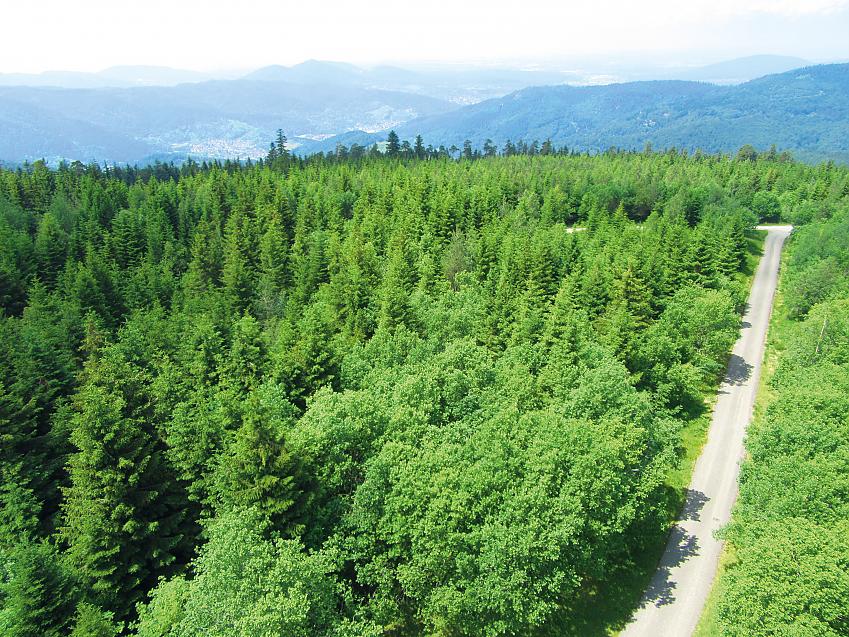 Just the three Fests today. I reluctantly passed on the first, by a lovely reservoir with (clothed) wild swimmers, kayakers and paddleboarders. I only indulged at the third, a funicular ride down from Sonnenberg in the pleasantly touristy spa resort of Bad Wildbad. Three euros (plus one for the returnable deposit on the bottle: recycling is a way of life here) seemed a bargain for a large local Pils, a cost-effective lubricant for my German.

More local specialities for my guesthouse dinner: ham, trout, a slab of Black Forest Gateau eight inches deep. (According to my cycle-campaigning tape measure, which is handy for checking too-narrow cycle paths and too-large potholes. Obviously I didn’t need it for any of that, being Germany.) My gateau contained approximately 600 calories, I estimated. That’s 0.7kWh, meaning the bike was consuming less energy per day than I was. 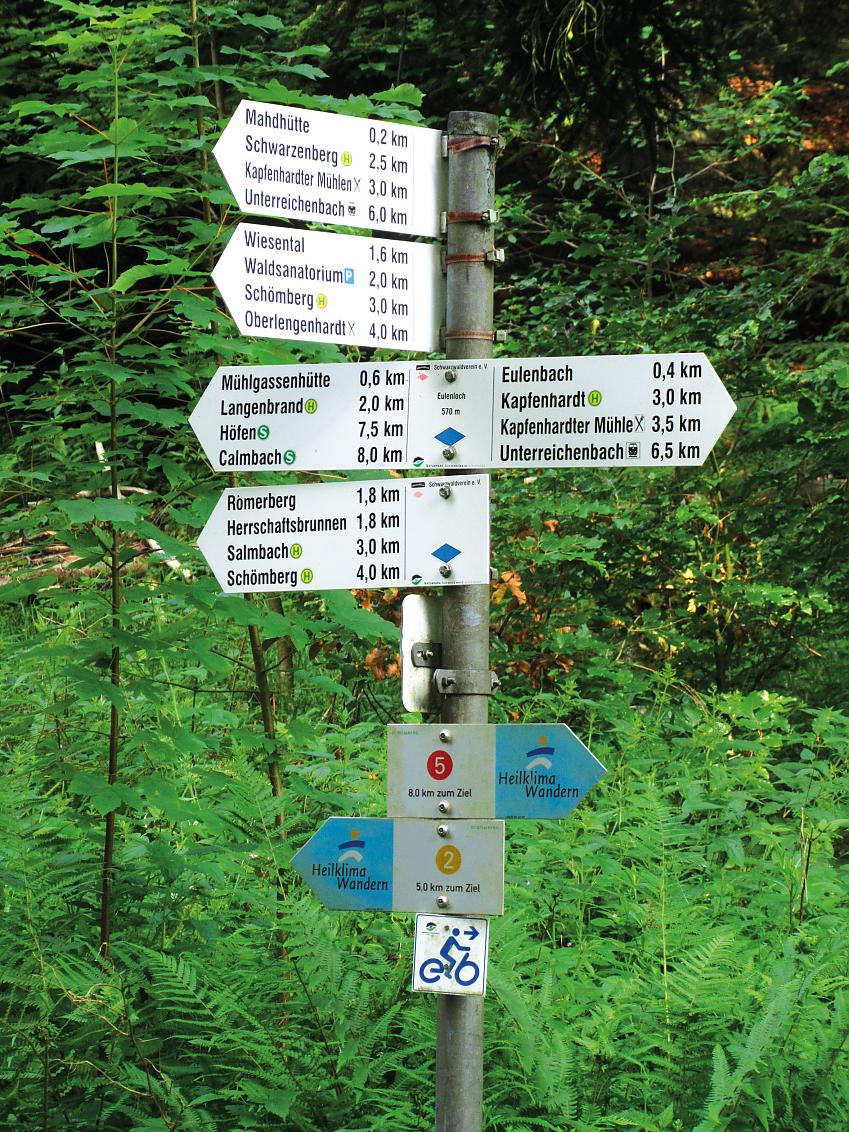 Germany has an enviable cycle network

In the footsteps of von Drais

The short last day featured a long, quiet climb into the wooded hills, a swoop down to a lovely riverside lane, more forest tracks, a final tiny Fest, and a riverside amble back to Bad Liebenzell to return the bike and head back to Stuttgart. But not before I’d whizzed up to the castle with my spare electricity, for a final coffee and cake and view down over the valley. It was a stiff climb I might have been less inclined to do on a loaded tourer.

It had been a beautiful, calming, sociable, very German little trip, full of wellness and bio and eco. But I’d only glimpsed the Black Forest. Next time I’ll visit the nearby towns of Karlsruhe and Mannheim, where visionary inventor Karl Drais did the world’s first bike rides 200 years ago on his Laufmaschine; you can retrace his steps, literally, though the route’s mainly humdrum townscape now. I’ll go to honeypot Triberg, with its coach parties and cuckoo clocks; Freiburg, a green and sustainable capital of 21st-century urban biking, a vibrant student hub with a lovely old town; Baden-Baden, so good they named it twice… And I’ll explore more of Germany. I’ll be back soon. Probably on an e-bike. 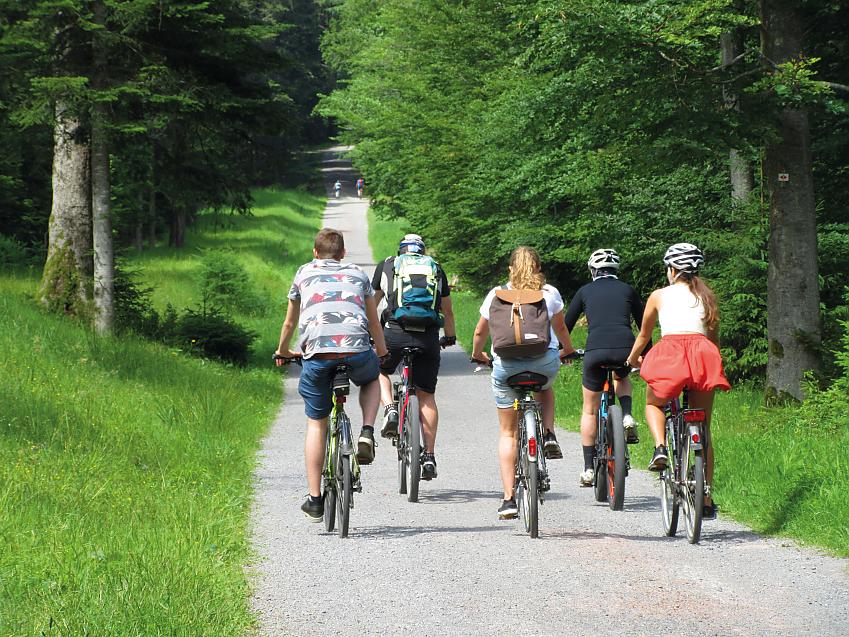 E-bikes, common in Germany, are perfectly set up for this sort of hilly leisure tour: robust enough for forest tracks but efficient on tarmac, and comfy enough for all-day riding.

A full charge (about three hours, from a standard socket) more than lasted me through an 80km day with 1,000m of climbing on the middle assistance ‘Tour’ setting. On the maximum ‘Turbo’ setting, you may only get 30–40km.

E-bikes don’t replace a conventional tourer, but are an excellent, different-feeling option for easy-going trips of short but hilly distances in comfort, particularly for couples with mixed enthusiasm for climbing.

I’M GLAD I HAD… Google Translate on my phone with German downloaded for offline use.

NEXT TIME I WOULD… Be less frugal with e-assistance early in the day, when most of the climbs are; I always had unused power at the end.