Great rides: After a disaster

Great rides: After a disaster

The month before Dave Barden was due to tour Sulawesi in Indonesia, the island was hit by an earthquake and tsunami…

"There’s been a big earthquake and tsunami exactly where you were going!” said my partner Frances. “You won’t be going now, will you?!”

My destination was Sulawesi, an oddly-shaped Indonesian island almost as large as mainland UK. My proposed itinerary would visit some areas affected by the disaster. Should I go or cancel?

I contacted tour agencies, checked the Foreign and Commonwealth Office advice, and read articles on the ethics of travelling to areas hit by disasters. They all suggested the same thing: go. 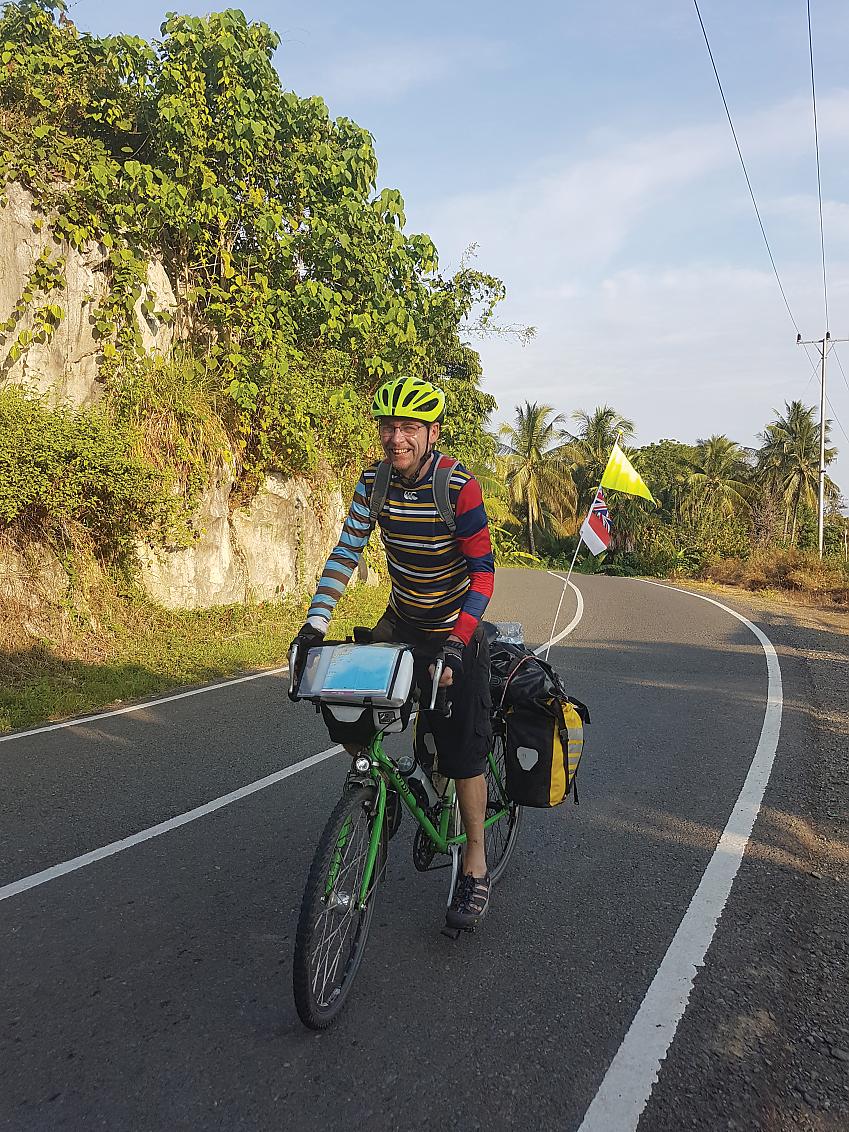 My flight from Jakarta to Manado banked around the north coast of Sulawesi, gaps in the clouds revealing deep green, forested hills, cleared here and there for villages clustered around churches and mosques.

It was hot and humid in late October, so I cycled into the countryside to acclimatise, past motor trishaws playing loud dangdut music. The volcanic island of Manado Tua loomed in the distance in the Celebes Sea behind Bunaken Island, a world-renowned diving centre. As I passed through the pretty village of Tiwoho, I had my first experience of the generous nature of the Minahasans. “Hello mister – come in and eat!” I shared food, laughter, photos, and great Sulawesi coffee with the Rotan family.

The following day, carrying plenty of water, I set out on my tour proper. It was a Sunday morning and I was joined by a local leisure cyclist, also David. We chatted in a mixture of languages before he sped away. 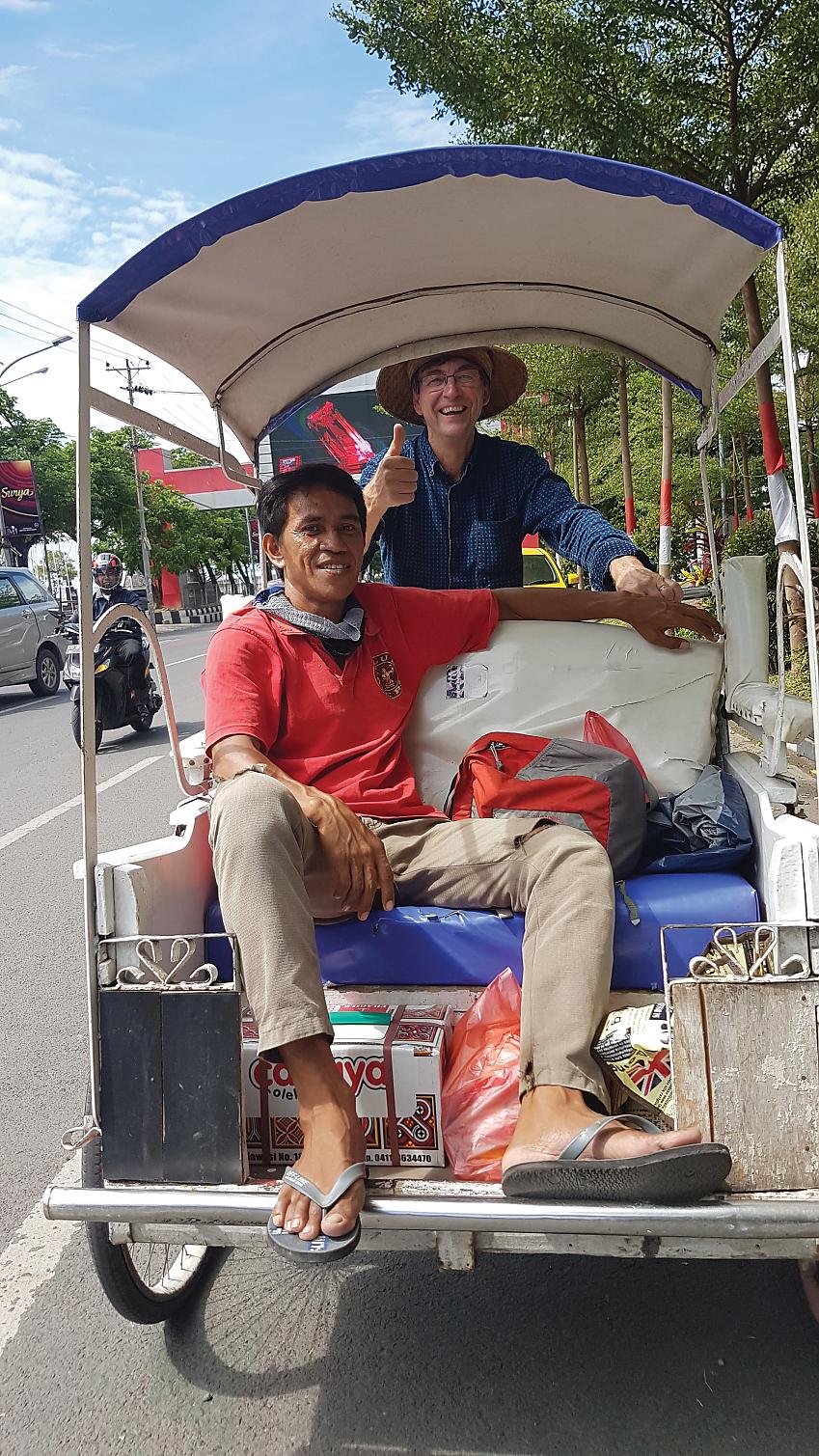 Over the next five days, I cycled through undulating coastal landscapes, past wooden houses, coconut and banana trees, agricultural workers carrying huge knives, and ox-carts pulling piles of coconuts. Outside mosques and churches, loudspeakers entreated drivers to drop money into earthquake-appeal buckets.

I had a tent with me but often stayed in hotels. In one I met a group of three forest rangers who, later that same day, took me for a delicious fish dinner. They were in uniform and explained the importance of their work protecting the wildlife and trees in National Parks. It was serious stuff: they had a machine-gun in the boot of their car. 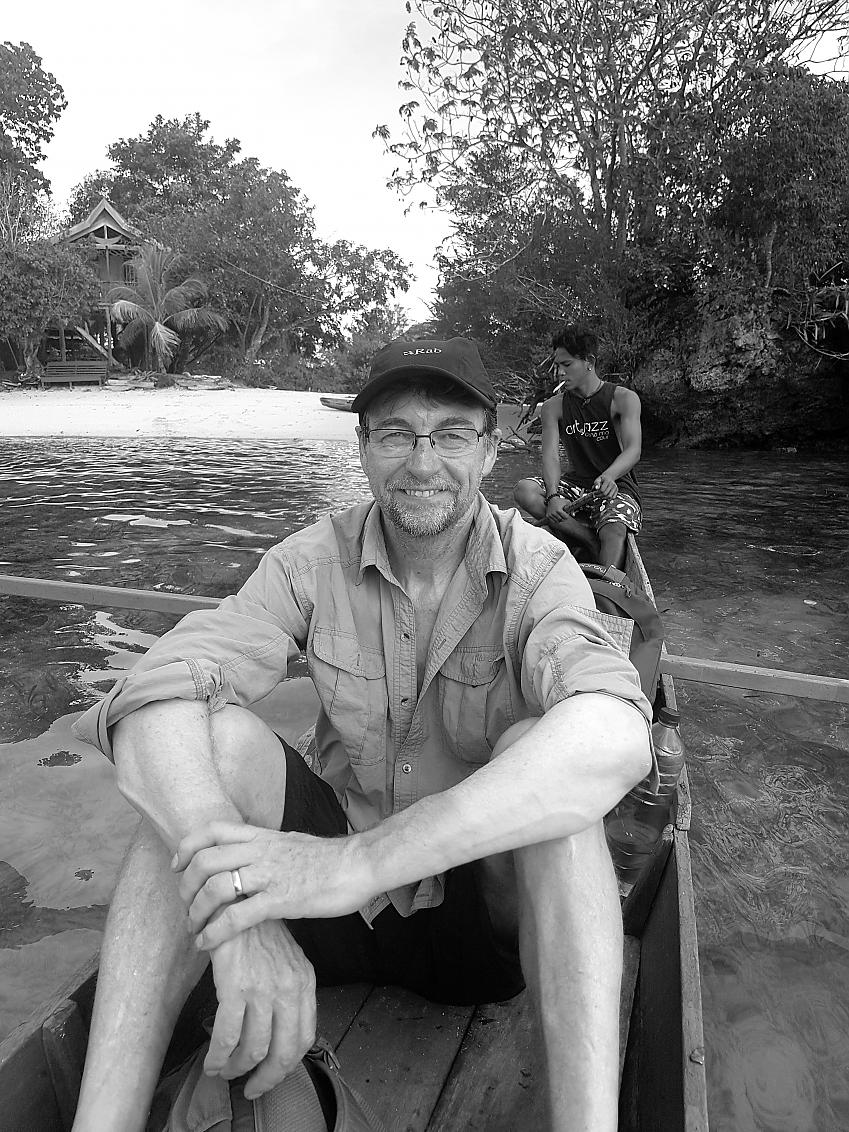 From Gorontalo, I took the ferry to Pagimana in Central Sulawesi. The coastal road was littered with large reptilian roadkill. I passed small fishing villages: houses on stilts over the tranquil Molucca Sea. Since it was Sunday again, the small outrigger boats were pulled up onto the shore. Thousands of small, silvery fish were drying on tarpaulins laid out in front yards.

Over a fish lunch I chatted with Emrai, a young man whose aunt had died in the liquifacted ground in Palu, and whose mother had decided to move far away from the horrific memories to eastern Sumatra. Emrai, still clearly in shock, was travelling to support her there.

Rainclouds threatened as I left Ampana and rode along the coast. When the downpour arrived, I pulled my bike under the shelter of a small warung (restaurant). Tim and Martin, German tourists from Leipzig, were there, drinking coffee. They were two of only a handful of foreigners I saw in Sulawesi. 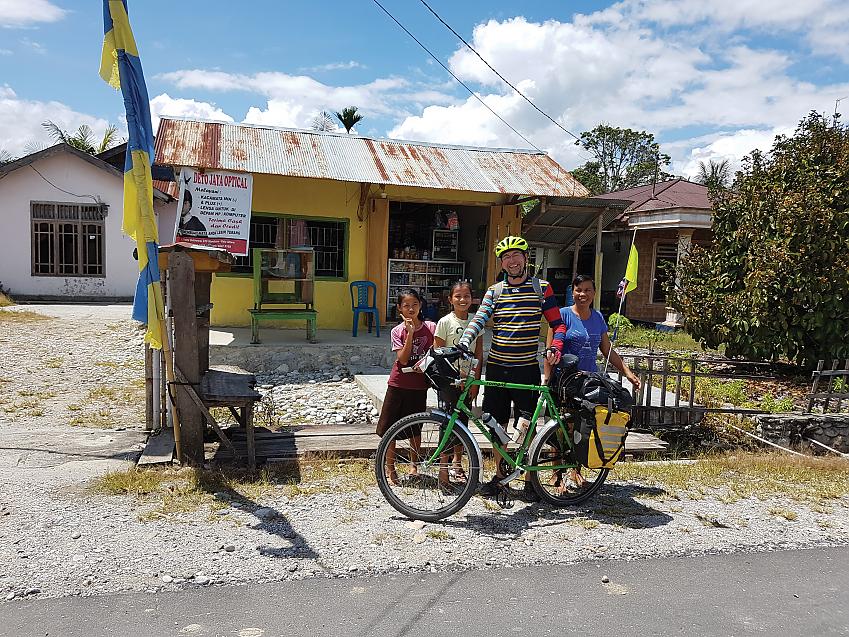 Continuing down the coast, I rode through pretty villages filled with flowers and dotted with posters featuring smiling or serious-looking candidates for next spring’s elections. Eventually I arrived at the northern end of Lake Poso.

The ride along the western shore of Lake Poso was a day of two halves. It began easily, among cocoa plantations. Then the road surface started to deteriorate and the gradient steepened. Near the top, I met three young men from Palu driving a van. They were taking donated clothing and other needed items to victims in their city.

Next day the road twisted and climbed into a deep forest at the base of Mount Balease. It was filled with the sound of crickets, frogs, birds and mammals. Hundreds of butterflies – red, yellow and black – fluttered by as I sweated up the hills. 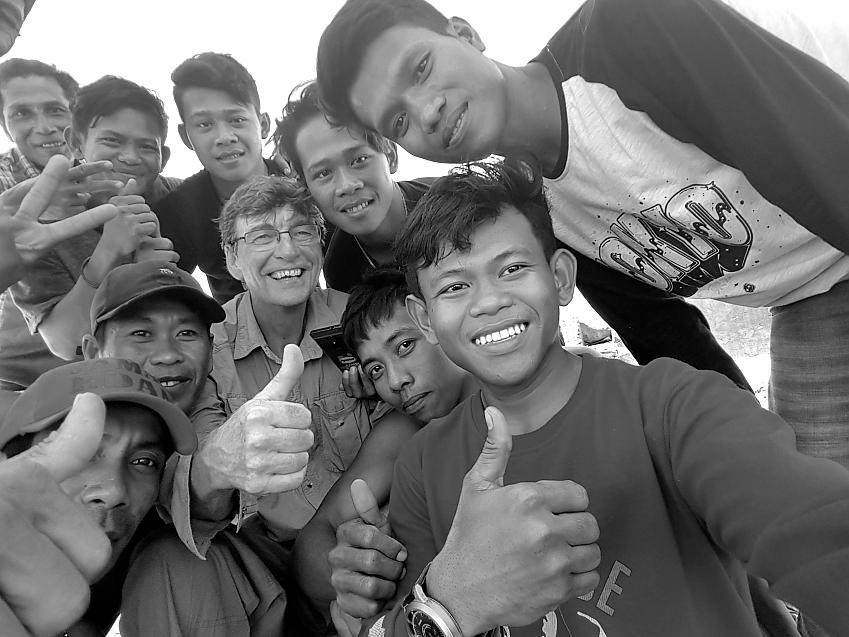 Arriving in Rantepao, I booked into an hotel to use as a base for exploring this high-profile tourist area. There were no others tourists. The two guides I spoke to had both suffered financially from cancellations caused by concerns for safety after the earthquake. One of the guides took me to see a Torajian funeral, one of most distinctive features of the culture.

In Enrekang, after continuing south, I met my first and only touring cyclists in Sulawesi: Ed and Hanneke from the Netherlands. On the flat, busy, Trans Sulawesi Highway, we were able to cover 70 miles with ease.

My final pedalling was not on my own bike but on a cycle rickshaw. I delivered its usual driver, Hendra, safely to his berth near my hotel. My Dutch acquaintances from a few days earlier happened to be passing and looked bemused. “I’ve run out of money,” I joked, “and had to find a job!” 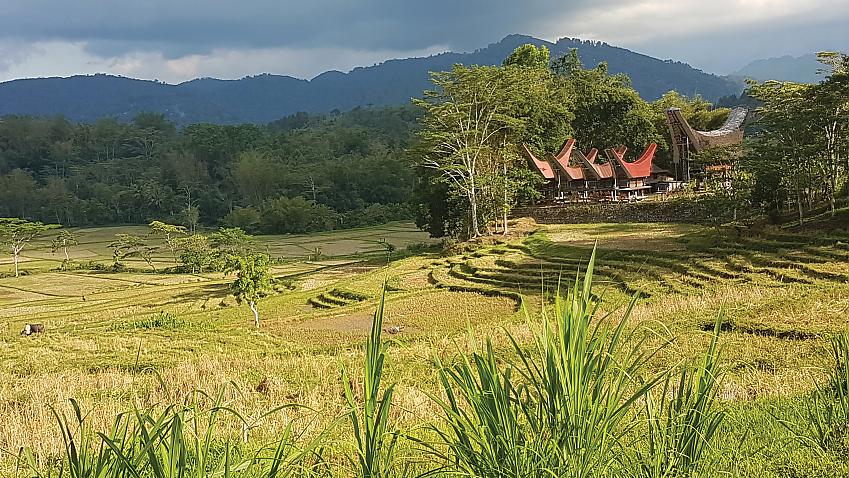 Bounce your ideas off Cycling UK members on our forum.

Conditions: Humid. Roads were mostly tarmac or concrete. Traffic was light except for in larger towns, where congestion kept speeds low.

Next time I would: Not take so many warm weather clothes and remember my camera charger.

Further reading: A Brief History of Indonesia by Tim Hannigan. Indonesia by Elizabeth Pisani. Like the Moon and the Sun by Stanley Harsha.