Exotic destinations are not required for a good day out on the bike. Harry Lyons and clubmates headed for Canvey Island – in winter

Canvey Island is a brown sauce smear on the map of the Thames Estuary, not far from Southend-on-Sea, so low-lying that it needs a wall 14 miles long to keep the tide at bay. I’ve cycled in Chile and Argentina, Spain and Portugal, Thailand, Laos and Pakistan. I’ve crossed the USA east to west and south to north. But I’d never been to this corner of Essex before.

We met in leafy east London, the Men’s Spa & Pampering Group: a baker’s dozen of gents of a certain age. Our outings are trips of up to 30 miles, starting with breakfast at The George in Wanstead, a local watering hole (‘spa’). We then head off to be ‘pampered’ with a guided tour – Hitchcock’s East End, Shakespeare in the City, Hawksmoor Churches, that kind of thing. Today we were catching a train to Benfleet to explore Canvey.

I’d done a quick trawl of the internet for information on Canvey before we’d set off. At ilivehere.co.uk, an anonymous post was headlined: ‘Canvey Island, a great place to take your kids… if you hate them’.

Canvey Island, it read, a great place to take your kids ... if you hate them

It went on to reference Burberry clothing, and Vauxhall Novas with ‘bling-bling’ body kits racing down the road. However, we were straight onto a pavement cycle path when we arrived, and when we had to cross the busy road, drivers were patient and considerate, perhaps noting our advanced years. With a combined age in excess of 700, we weren’t quite as old as Canvey, whose habitation history goes back to Roman times. 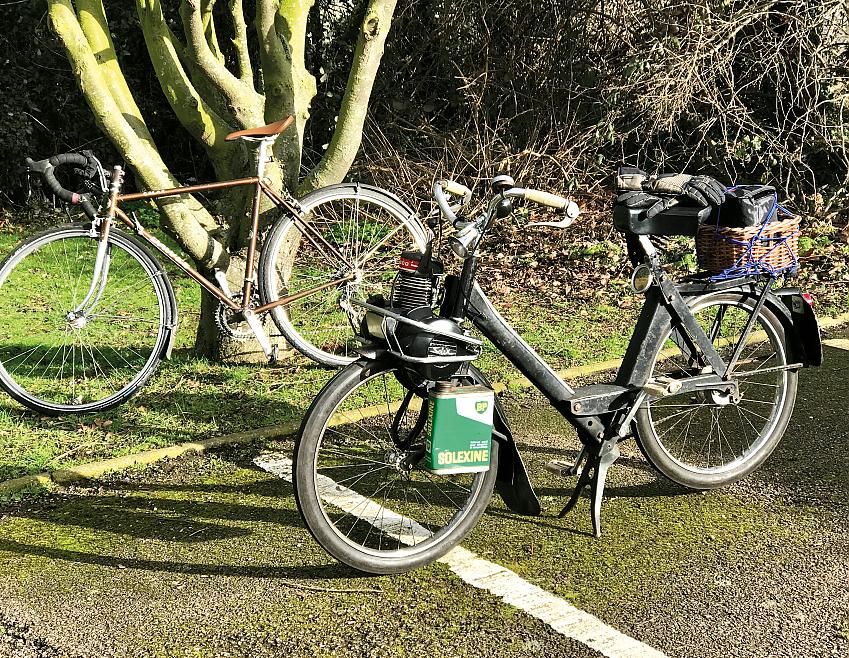 Almost immediately, we were bumping our front wheels up against that history, parking our bikes (plus one VeloSolex) in the car park of the Dutch Cottage Museum. The island, being not much more than a mudflat, suffered regular flooding. In the early 17th century, Dutch engineers and workers were brought in to drain the marshland and build sea defences. Dutch Cottage, one of two remaining on the island, was built in 1618, probably to house chief engineer Cornelius Vermuyden.

Now a museum, it apparently holds an impressive collection of corn dollies. Unfortunately, it was closed for the winter.

Our disappointment was short-lived, because next on our itinerary was the Canvey Island Heritage Centre Museum, housed in a former church, St Katherine’s. Crammed with an eclectic mix of artefacts from Canvey’s history and staffed by volunteers, it was a source of wonder. Particularly striking was a rusted length of rail: all that remains of the Canvey Island horse-drawn monorail tramway. 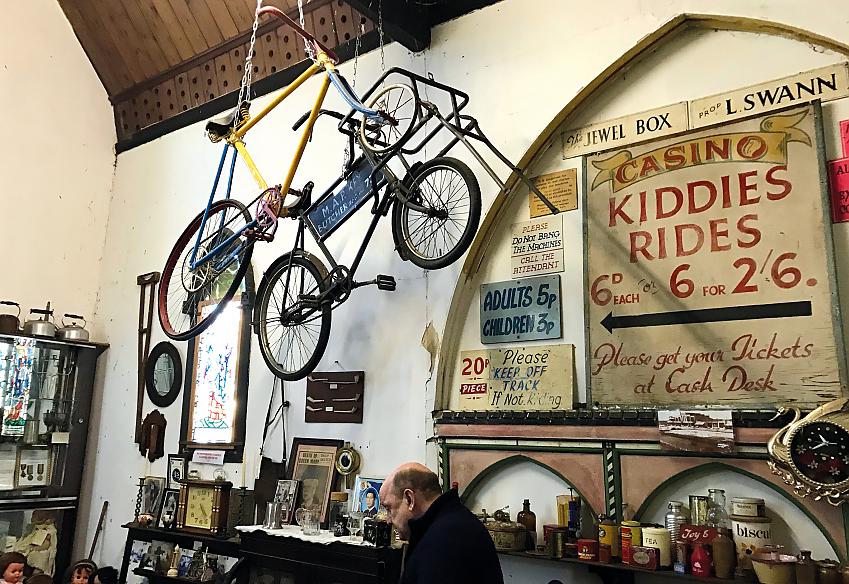 The weather forecast for the day threatened an almighty storm, and exposed Canvey Island would not have been a pleasant place to be in one. Yet we were blessed with light cloud and hazy sunshine for the ride to our next port of call – the beach, where the sea wall sheltered us from the worst of the buffeting wind.

We looked out over the mudflats to a panorama of petrochemical industry storage tanks behind the sky blue of the sea wall.

As the 19th century turned in to the 20th, and the main line from London to Shoeburyness was completed, Canvey became an attractive prospect for overspill from the crowded city and as a burgeoning seaside resort – hence the monorail. From 1936 to more recent times, oil and were the economic drivers for development.

To divert us from the sumptuous glisten of sunshine on wet mud, Haydn, a leading Spa & Pamperer, had a tale to tell about Canvey’s most well-known disaster: the flood of 1953, which caused the loss of 58 lives.

Haydn’s research had unearthed the story of a 70-year-old widow trapped in her bungalow by rising waters. She piled books onto a washstand and clambered up, standing for over 12 hours with her head against the ceiling and water up to her waist. She was rescued by a man in a small boat and taken, dressed only in underwear and a plastic mac, to Benfleet rest centre, where she was given a pair of rubber knee boots. I wondered if she had somehow inspired Essex songwriter Ian Dury, whose debut album 24 years later was ‘New Boots and Panties’.

Down by the jetty

Back on our bikes, we headed off to the final site on our tour of historic Canvey: another ‘spa’ where we intended to get well and truly pampered – culturally speaking, that is. The Lobster Smack, our leader Neil informed us, had a claim to literary fame in Charles Dickens’ Great Expectations. Pip and Magwitch were being rowed down the Thames to a ship anchored in the estuary. As night fell, they were looking for somewhere to stay – and they found this very pub!

Leaving our bikes (and the VeloSolex) outside, we went in for fish and chips. I was hoping for local beer, having recently sampled ‘Rhythm Stick’ and ‘Sex and Drugs and Rock and Roll’ from the Billericay Brewery. No luck: Ian Dury was Essex but not Canvey. One of the ex-Blockheads, however, defined ‘the Canvey Sound’. Wilko Johnson was the driving guitar force behind ’70s band Dr Feelgood.

To celebrate our successful cultural outing and Canvey’s musical heritage, Neil distributed song sheets while Russell and VeloSolex Andrew broke out the ukuleles. Then 13 old men treated the pub to a slightly hesitant rendition of Dr Feelgood’s anthemic ‘Milk and Alcohol’.

That should have been a fitting finale to our day – but no, the pub held a further surprise: Wilko Johnson had entered the premises! He was upstairs recording something for TV. Would he like to join us for a couple of choruses, we asked? His runner was evasive.

So we went outside and climbed onto the sea wall, putting us at the same level as Wilko upstairs in the Lobster Smack. Perhaps we could entice him to join us? The boys pushed the volume knobs on the ukuleles up to 11 and our massed voices struggled to find the same note. Wilko’s runner ran out and told us to push off. We were spoiling their recording.

We cycled off to the The Hoy and Helmet in Benfleet. The church next door, St Mary the Virgin, dates from 894AD. On this February day, it was surrounded by early daffodils and snowdrops. We lingered a while in the late afternoon sun, then repaired to the boozer for more pampering before the train home.

Route: Wanstead to Barking, partly on the Roding Valley Way, then train to Benfleet. 12 bikes (not the VeloSolex!) weren’t a problem on the train. The route on Canvey remains a mystery to me but you can check it out here: https://www.relive.cc/view/853936445

Conditions: We cycle all year round but London may be the driest and warmest area of the UK; our outings rarely suffer from bad bad weather. This trip was in early February with a major storm forecast. Although it lurked on the horizon, we had a sunny day out at the seaside.

Maps: No maps for us, but advance route research is necessary.

Next time I would… find a station with a lift. Arthritic hips and knees are fine on bikes but not when carrying them up and down stairs.

Travelling out to the countryside from London, or back again, can be managed on canal paths and by using Transport for London Bike Maps (bit.ly/cycle-tflmaps). 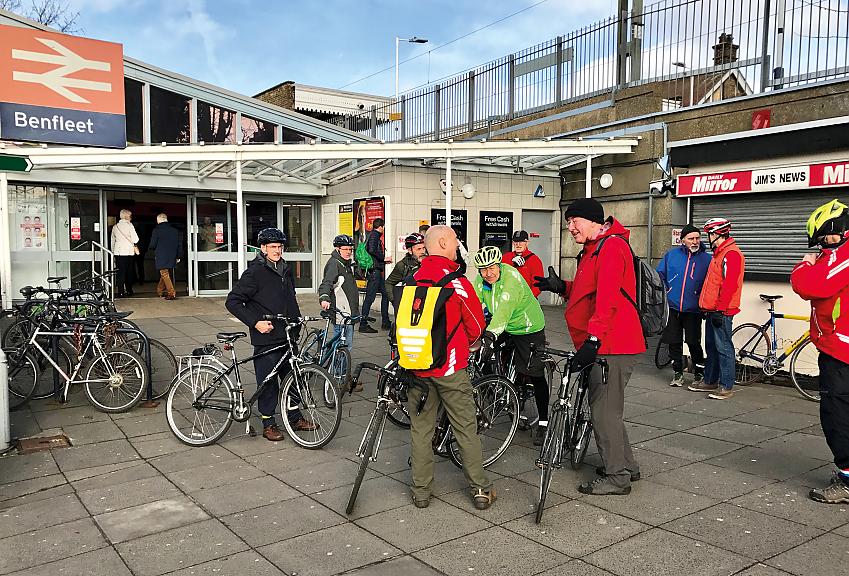 Once out of Central London, the Tube system and overground lines carry bikes, and on many rail lines TFL’s Freedom Pass can be used to its furthest limits, making the rail fare cheaper. Any bike will do. We’ve had shoppers, road bikes, folding bikes, and the VeloSolex mentioned here. Sometimes I use an old fixed-wheel Jack Taylor.