Anna Hughes on her way to Europe
By Anonymous
Tuesday, 9 February 2021

Trains aren’t just greener than planes for travel into Europe – they can also be fast and more fun, as Anna Hughes discovered last year

Awareness of climate change and our need to reduce emissions has been growing in recent years, and the way we choose to travel can have a big impact on our carbon footprints. Trains, especially those on the Continent, can have a 10th of the emissions of a flight. But it’s not just emissions: the experience of train travel enhances the journey in a way that air travel doesn’t.

Bikes and trains are natural partners, not only because they are both low-carbon, but because the combination means that, with a little imagination and time, almost nowhere is off limits. When it works well, transit is easy. And it’s flexible: a cycle tour could start and finish in a far-flung location with train travel at either end, or rail could take you to your starting point or bring you home after a long cycling trip.

This is what I chose for my tour last year. Cycling to the sea has long been my favourite type of adventure – usually within the UK. For this tour I decided to swap the chilly North Sea for Mediterranean warmth and ride the length of France from Dieppe to Nice.

To add to the challenge, along the way I would complete the Cinglés ascent of Mont-Ventoux (three times in one day), then catch the train home.

Across France at 320km/h

There are more bike-friendly routes than this one: to get back to London from Nice I would be taking the intercity TGV followed by the Eurostar. Cycling UK worked hard to convince Eurostar to allow fully assembled bicycles on board, but the same does not apply to the TGV from Nice to Paris. I would have to dismantle my bicycle and put it in a bag.

The bag I chose was the inexpensive Tifosi Lightweight Bike Bag. It’s light but bulky, although I avoided having to add it to my panniers because my boyfriend came out by train to join me in Nice. If this hadn’t been the case, I could have posted it to the hotel.

The morning of our journey home was supposed to be a relaxed affair, after one last coffee and fresh croissant on the seafront.

I had successfully cycled the length of France in 12 days, completed my triple ascent of Ventoux, survived sore knees and sunburn, swum in the glorious Mediterranean several times, enjoyed cocktails in the famous Hotel Negresco, and generally spent time recovering from the tour. All that remained was to board the TGV home.

I’m a terrible last-minute dasher but not that day. This was a train that could not be missed!

TGV specifies that your bagged bike must not exceed 120×90cm so I removed the rack and mudguards as well as the wheels to be sure. So, even though I thought we had arrived at Nice Ville in plenty of time, dismantling and bagging the bike took us much closer to the train’s scheduled departure.

It was pulling into the platform as we struggled through the barriers with my luggage. I ran to the door and chucked the bags on, then came back to help my boyfriend with the bike. He raised his eyebrows at me as we collapsed into our seats. 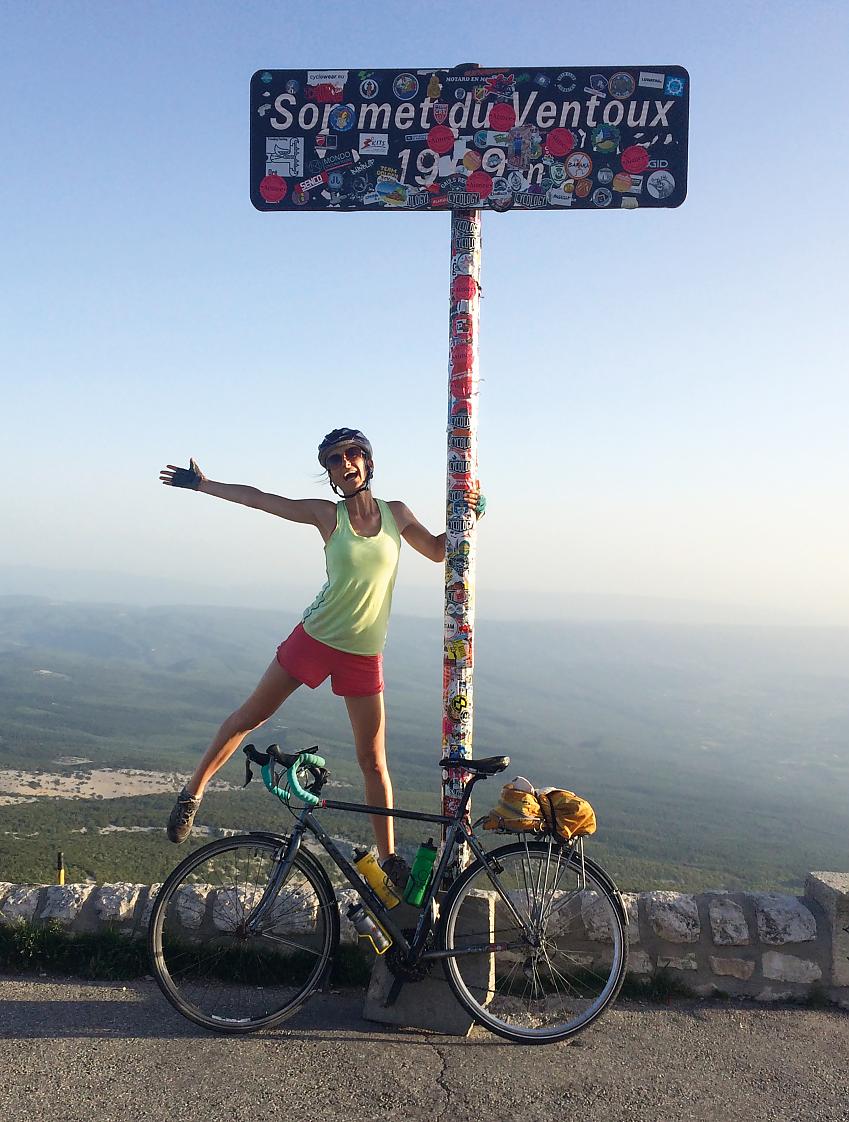 Anna completes her third climb of Ventoux in a day

Mad dash aside, I would recommend travelling this way. Although the dismantling and manhandling was a pain, it was worth the effort: the bag sat snugly in our eye line for the entire journey, with no need to make a booking, buy an extra ticket, pay a fee, or hand it over at the airport and then worry about broken derailleurs or frame dents.

Train travel is so civilised. The landscape unfolded outside the window as my two-week tour passed by in reverse over mere hours.

Given that bikes roll easily and are awkward to carry, especially heavy touring bikes, I reassembled it as soon as we’d extracted ourselves from the train at the Gare du Lyon, ready for the ride across Paris. It’s a common transfer if you’re coming from many European destinations. The ride is easy, thrilling, and on this occasion, quicker than the Metro.

“How much did you pay?” asked a girl waiting with her Dutch bicycle at EuroDespatch in the Gare du Nord, before boarding the Eurostar. “€55,” I replied. “It would have been cheaper but I didn’t book early enough.”

Surprised at both the cost and the need to book in advance, she was lucky – bike and rider travelled on the same train. It’s not always the case if you do it last minute.

If you can handle the logistics – including the long walk and wait to reclaim your bike – using Eurostar for one leg of your journey does offer quick transit to and from a huge number of European destinations. These include Barcelona, Madrid, Milan, Frankfurt and Geneva on the TGV, and further afield using trains such as AVE (Spain), Thello (Italy), ICE (Germany) and Thalys (Belgium). Most of them require your bike to be bagged.

Some French trains do allow fully assembled and un-bagged bikes – TGV routes from Paris to Biarritz or Nantes, for example, as well as regional TER trains. In fact, I could have travelled home from Nice on a combination of regional trains, but I chose the ease and speed of the TGV.

Bikes and trains are natural partners, not only because they are both low-carbon but because the combination means that, with a little imagination and time, almost nowhere is off limits

The same pattern applies in most countries: for those intercity trains that do take full-sized bicycles, you need a reservation. Local trains have bike spaces that generally don’t require booking, although you might need to pay a fee; for example, in the Netherlands, Austria and Switzerland. This gives many options for travel, including a hop-on, hop-off tour if you want to keep your plans loose.

If fully assembled bicycles aren’t allowed and boxing or bagging won’t work for you, there are ways to ‘beat the system’.

Hiring a bicycle at your destination could offer all the flexibility you need. Or you could follow in the footsteps of world traveller Heinz Stücke who, after cycling around the world for 50 years, switched to a Brompton folding bike so he could use other modes of transit more easily.

As well as folders, there are separable bikes. Cycling UK tested a Ritchey Breakaway and Surly Travellers Check a while ago. Or you may be able to pack your bike small enough ‘Rinko’ style; see the review for instructions.

Before setting off from St Pancras, most of us will first have a long journey to get to London. Intercity trains typically need bikes to be booked in advance. Some rail franchise websites allow you to do this when you book your ticket. Don’t forget that you can make bookings for trains run by one franchise through another’s website.

You can also make a reservation through Twitter, which I have found to be by far the most reliable way to book my bike on a train – just search for the train provider and send them a message. I have even booked my bike on a connecting train while on the previous train this way.

Another option is in person at the booking office. The computer systems are all connected so the person behind the desk should be able to book your bike from any station, not just the one you’re at.

For further information about taking your bike on the train in Europe, the excellent The Man in Seat 61 offers encyclopaedic instructions. Also useful is the bicycle page on RailEurope, or the hashtag #bikesontrains on Twitter.

This article was originally featured in the Aug/Sep 2020 issue of Cycle magazine.