First look: The Raleigh New Motus Tour Plus is a heavyweight hub-geared roadster whose Bosch mid-motor makes commuting a breeze

Urban transport is one of the most important roles or e-bikes. Richard Peace tests a Raleigh New Motus Tour Plus and a Volt London

You can ride to work on any e-bike. For this test I’m defining ‘commuter e-bikes' as machines that are practical, utilitarian, and durable – the kind of e-bikes that might persuade someone to get out of their car for the journey to work and keep doing so even in bad weather. This is where the ‘e’ in e-bikes is so important: that electrical assistance makes cycle commuting so much easier on a rainy Monday morning.

The test models contrast nicely. Raleigh’s New Motus Tour Plus is part of an extended New Motus range for 2022. This one has an 8-speed hub gear and sits towards the top end in terms of spec. It’s clearly aimed at cyclists who just want to get from A to B comfortably and easily. 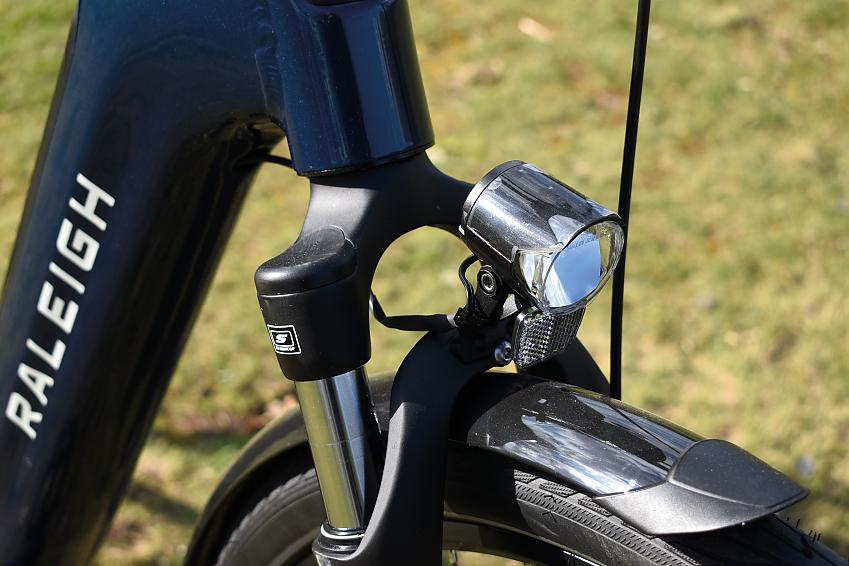 First look: The Raleigh New Motus Tour Plus is a heavyweight hub-geared roadster whose Bosch mid-motor makes commuting a breeze

The Volt London, also new for 2022, is a singlespeed. Despite its minimalist looks, it still has everything you need for commuting. And while non-electric singlespeeds are traditionally seen as a sporty niche, the addition of a motor makes a one-geared bike an option for anyone. Volt is London based and has many years of experience in producing only e-bikes.

The Raleigh New Motus has a step-through frame with a huge down tube, which provides frame stiffness without triangulation. The big tube also houses the battery. By contrast, being a classic diamond frame design, the Volt London has a much slenderer appearance. 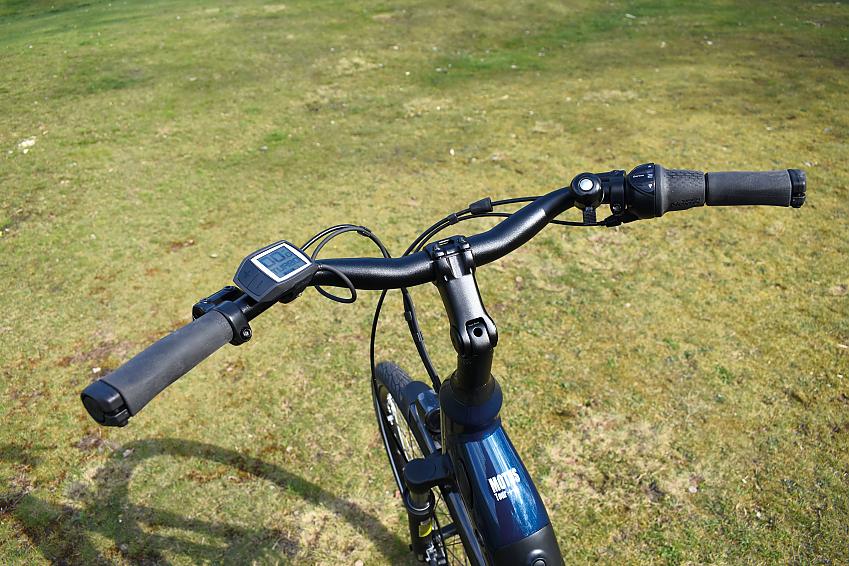 Although both test bikes have a similar middling frame size, the Raleigh is a much bigger e-bike. That impression is reinforced by its high front end compared to the racier design of the Volt frame. The Raleigh comes in five sizes (I tested the middle one), while the Volt comes in a single size. Tall or short riders are therefore more likely to find a Raleigh that accommodates them comfortably.

The Raleigh is the heavier e-bike by almost 6kg. This will matter more to some cyclists than others. Compared to non-electrics, weight is less of an issue with e-bikes as you have a motor to help you up the hills. However, if weight is important to you – for example, if you need to regularly carry the bike up steps – neither model is particularly light. (A lighter e-bike from the likes of Ampler or Ribble may suit you more in that case.) The Raleigh has a ‘sit up and beg’ frame and is clearly aimed at riders prioritising comfort, whereas the Volt has the slightly leaning forward riding position typical of a sports hybrid. 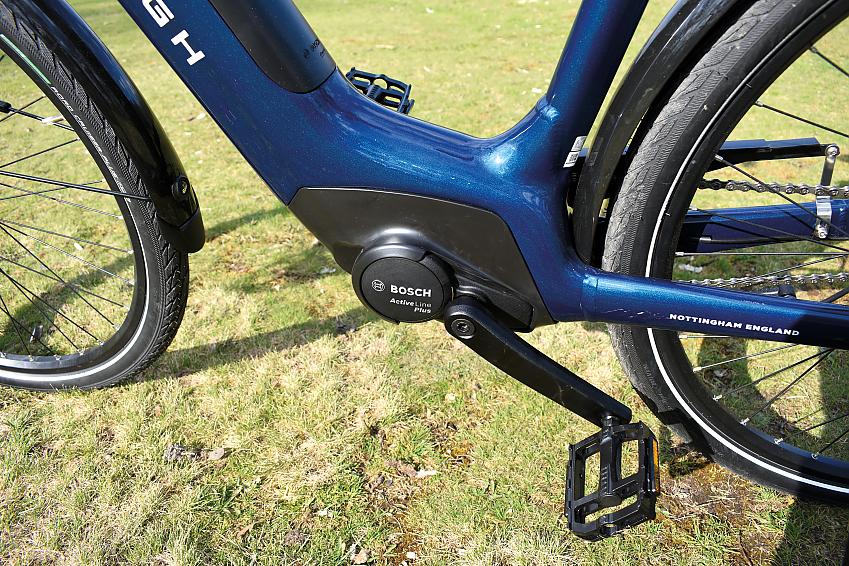 As with the vast majority of e-bike frames today, both are sturdily built with neatly welded joints. Both frames are very nicely finished too, the Raleigh in a lustrous, semi-metallic dark paint described as ‘deep sea blue'. The Volt is brushed aluminium, giving the frame the look of stainless steel.

Brake, gear and electrical cabling is internally routed in both cases, though slightly neater on the Raleigh where it enters via the oversize head tube and exits via the chainstays. On the Volt, cables enter the underside of the down tube near the head tube and exit near the bottom bracket, leaving cable runs a little more exposed at the rear of the bike. The Volt comes equipped with a porteur-style front rack and has fittings for a rear rack. The Raleigh has a rear rack but won’t take most front ones. 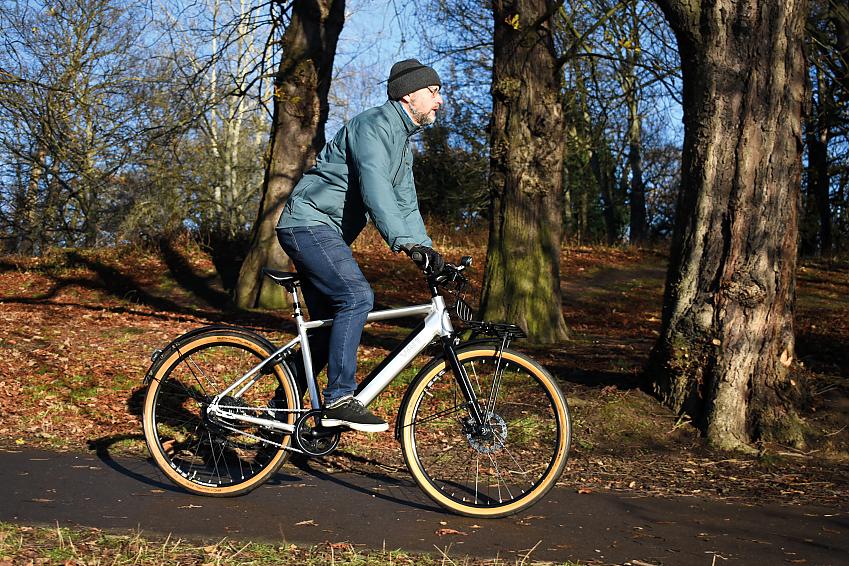 The forks underscore the different riding styles the bikes are designed for. The Raleigh has a Suntour NEX suspension fork with 52mm of steel-sprung travel. The Volt has a rigid aluminium fork that's finished in matt black, perhaps to give the impression of a carbon fork.

The most obvious contrast here is in the motor systems. The Raleigh features a mid-drive (also known as a crank drive) from market leader Bosch. It’s undoubtedly high quality and also carries Bosch’s impressive battery guarantee of a minimum of 60% of full charge capacity for two years or 500 charge cycles, whichever comes first. In practice, I would expect a well cared-for battery to last much longer. 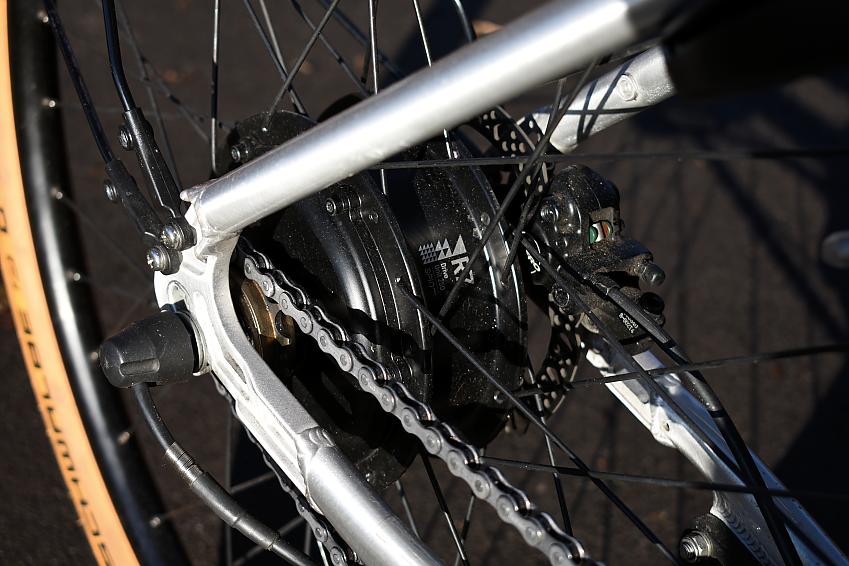 Good torque sensing means the hub motor kicks in as soon as you press on the pedals, so it’s easy to get the singlespeed gear turning

The Bosch Active Line Plus motor seems well paired with the relatively small 400Wh battery. It’s only one up from the least powerful Active Line in the Bosch family of motors so it won’t have the oomph of Bosch Performance Line motors. However, the 8-speed Shimano Nexus hub gear lets you leverage motor power across a wide speed range, so the bike can easily get up just about any road gradient – just not quite as quickly as more powerful mid-drives. If you live in a very hilly area, a larger rear sprocket can always be fitted for easier climbing.

The Volt employs a far more unusual drive system. It features a Bafang rear hub motor (common enough), torque sensing (unusual with a hub motor) and a throttle trigger (much more unusual). The company has clearly thought about the spec here and matched it to the characteristics of a singlespeed e-bike. With power assist needed to overcome the inertia of singlespeed gearing from the second you put pressure on the pedals, torque sensing is certainly the way to go. On paper it looks an ideal combination. 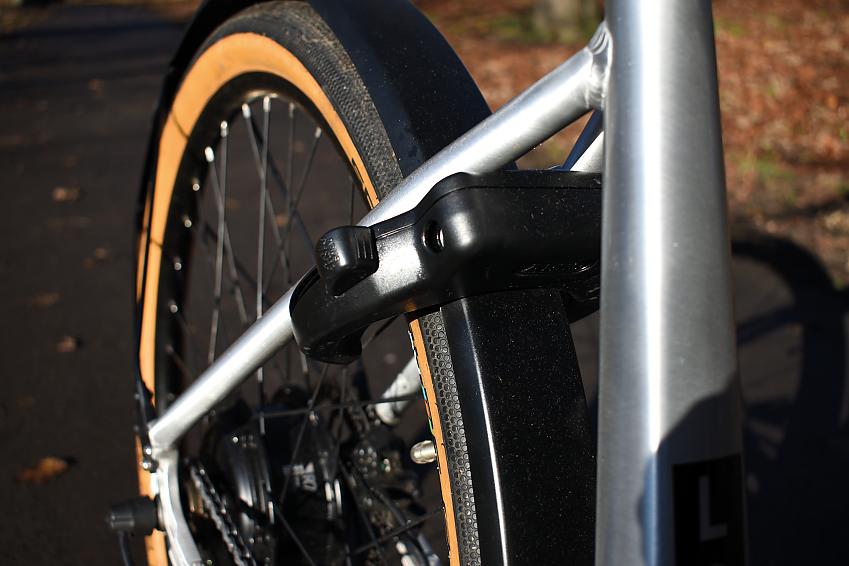 The rear wheel lock is a practical addition on the Volt

You may have read that throttles are illegal on e-bikes in the UK but in fact it’s throttle-only operation that is illegal. Throttles are allowed if they can be operated either independently up to 4mph (walk-assist style) and/or give full legal motor power only while the pedals are turning. An instantaneous power boost provided by a powerful throttle can be a very great help on a singlespeed.

Both bikes have 50mm-wide tyres for a good amount of comfort. The Schwalbe GOne tyres on the Volt are superior to the Schwalbe Road Cruiser Plus on the Raleigh, having equivalent or better road speed and more grip in gravel bike conditions such as on forestry roads and towpaths. 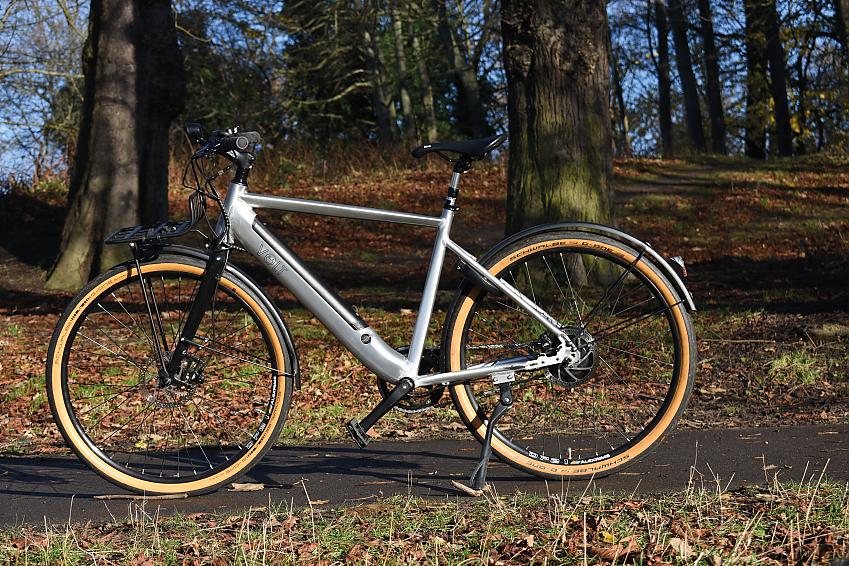 504Wh battery on the Volt locks securely in place…

Both bikes feature LED lights with enough power for good visibility on unlit roads, and both have a full complement of commuting extras: mudguards, kickstand, and rack. The SKS mudguards on the Volt seem more durable than the rather plasticky affairs on the Raleigh. The Raleigh also has similarly flimsy-feeling plastic on the battery and motor covers, while the metal catch on the battery cover looked like it could easily scratch your lovely frame unless closed carefully. The Volt’s 504Wh battery is a very sturdy feeling, one-piece, all-metal design. Both batteries lock in their frames very securely. 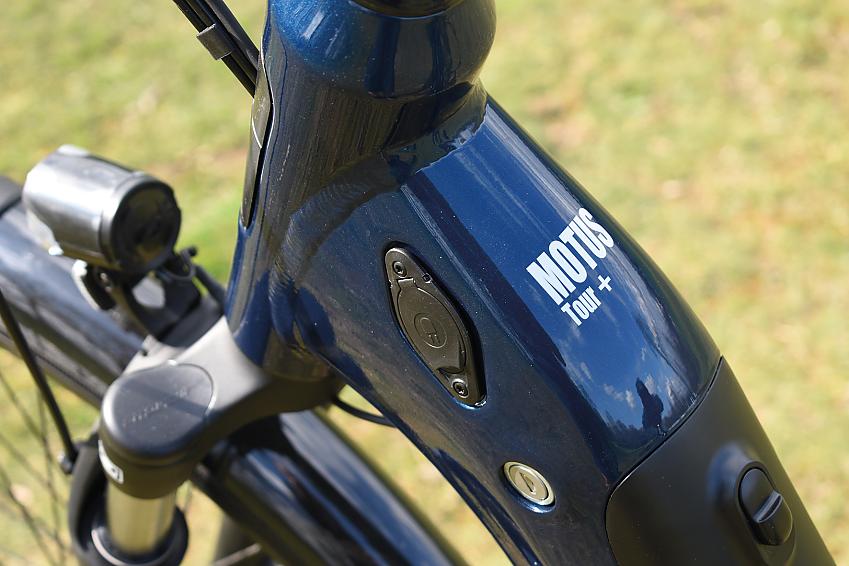 The Raleigh is comfortable to ride and its upright position is confidence inspiring, making it ideal for new and returnee cycle commuters who want a bike that helps them feel safe and secure in traffic. Many riders say electric-assist is a boon in busy town traffic too, allowing a quick getaway at junctions and lights. The Raleigh’s torque sensing mid-drive is quiet and smooth, and the four power levels are easy to toggle through to find just the right level of assistance. Gear shifting with the twist-grip shifter is intuitive and can be done while stationary. 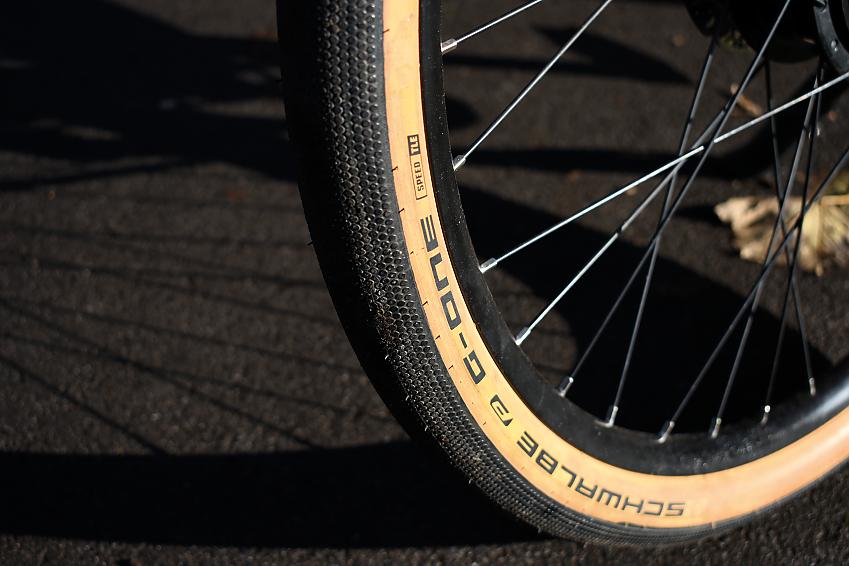 The Volt is reasonably comfortable, although I found the suspension seatpost totally ineffective, the spring being too stiff for my 68kg weight. Sportier and slightly fitter riders will likely enjoy the Volt most, as you have to put in more effort on hills. I loved the combination of smooth torque sensing and punchy throttle power. I found myself standing out of the saddle for maximum pedal pressure quite often. It feels fast and smooth, and I even made it up a short 25% gradient, though I wouldn’t want to be tackling that kind of hill too often. (The Raleigh tootled up sedately and easily.) If it’s only moderately hilly where you live, the Volt could prove a fast, effective and low-maintenance get-about.

You might assume that the 504Wh battery on the Volt would give more range than the 400Wh battery on the Raleigh. However, I found 30 miles was a fair range estimate for both e-bikes over pretty hilly country. As ever there are so many variables it’s difficult to pin down a single figure. 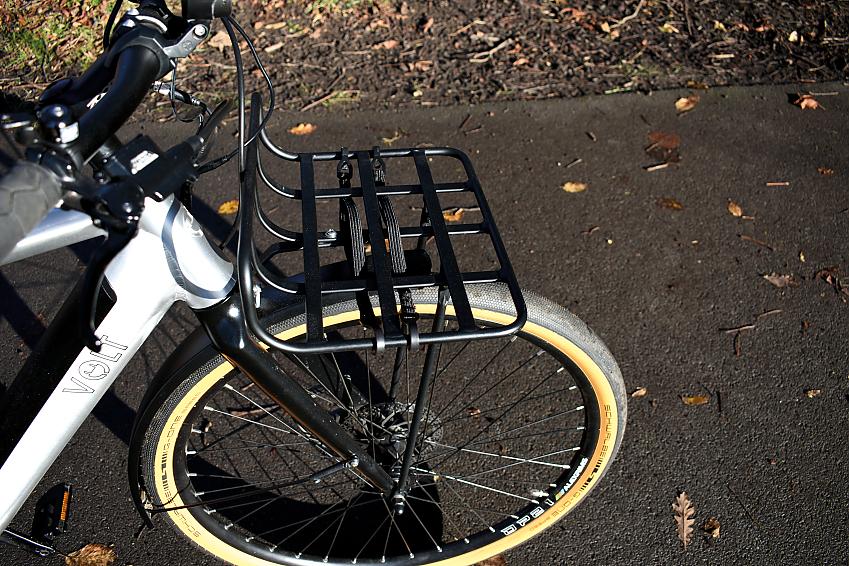 The Porteur rack on the Volt scores hipster points

Both bikes are well designed for commuting but would suit very different riders. The Raleigh is a great introduction to dependable, safe, easy and low-maintenance electric commuting.

The Volt is geared (sic) more towards those with cycling experience. If you’ve tried a non-electric singlespeed in the past and found it too hard, don’t be put off: electric-assist transforms the ride. Powering up hills is much easier, yet the simplicity of a single gear makes it an engaging daily runaround. 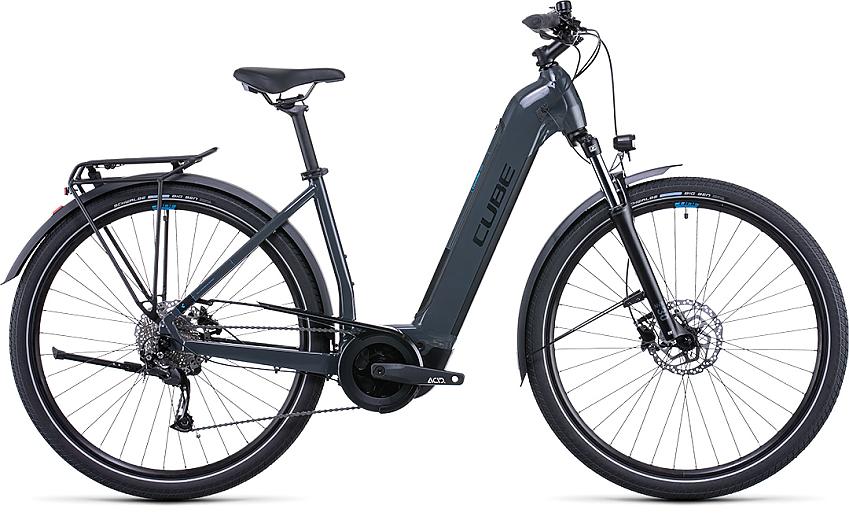 A bit sportier geometry than the Raleigh with a more powerful Bosch mid-drive, though the same size battery. You can pay extra for 500Wh or 625Wh versions. 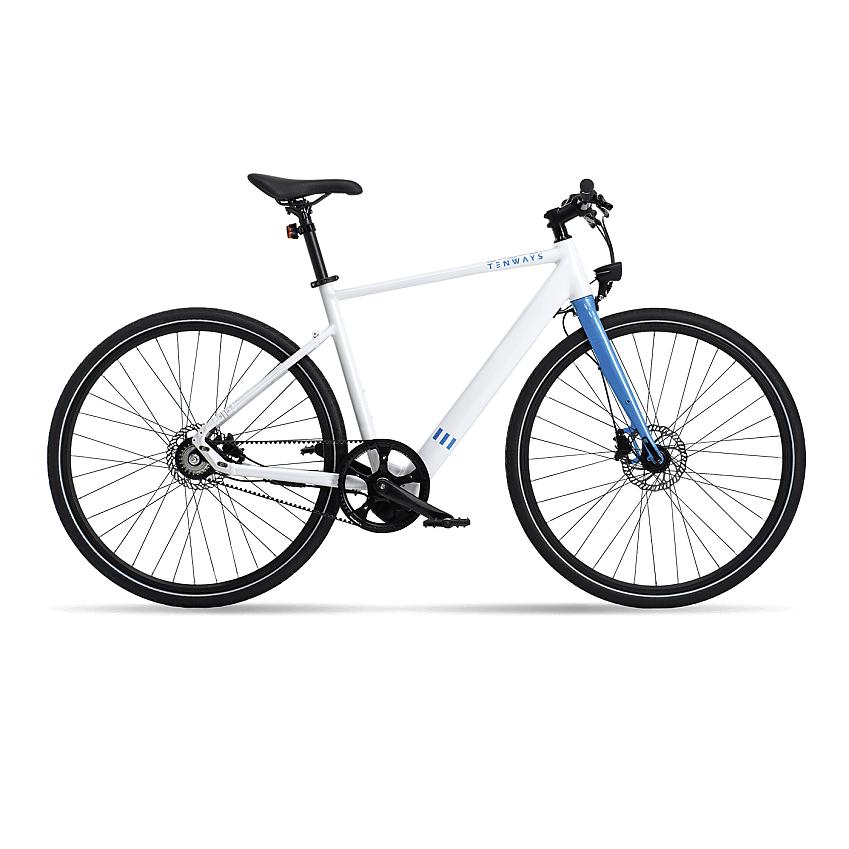 Successful Kickstarter torque-sensing singlespeed with belt drive. Significantly lighter than the Volt but with a smaller, non-removable battery. 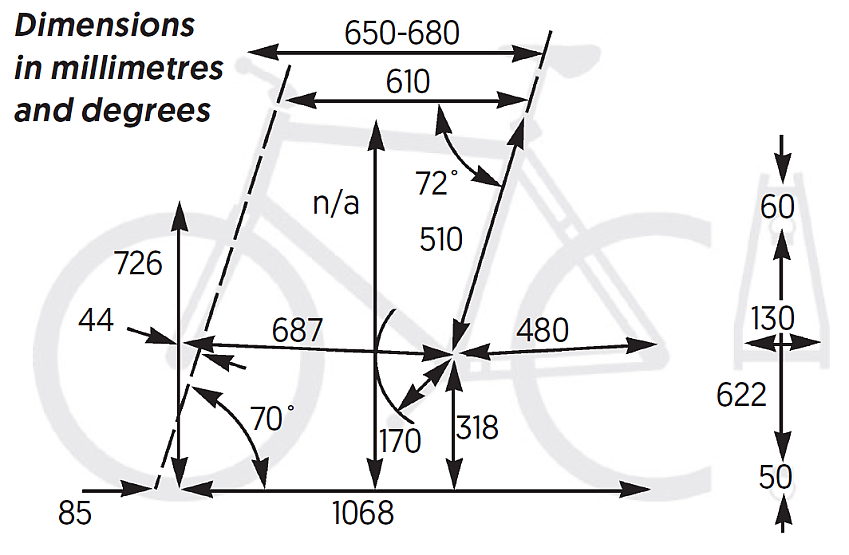 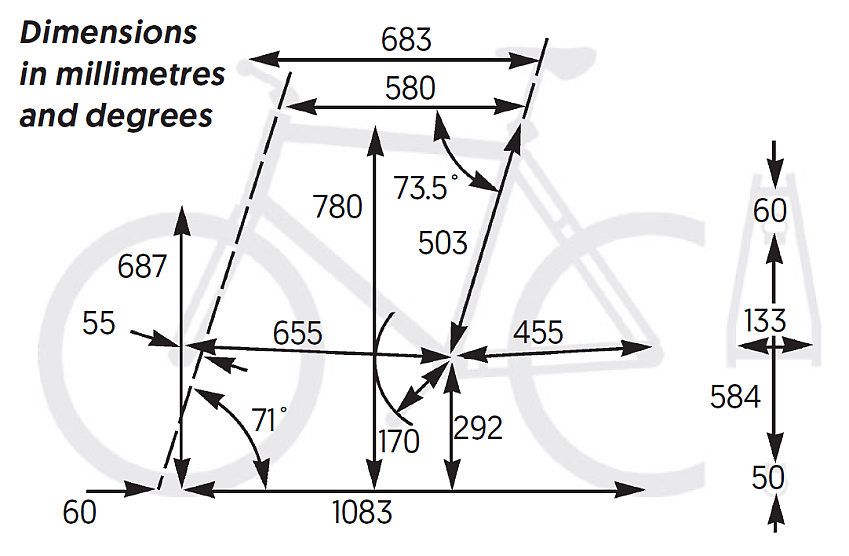 Transmission: Single gear. One ratio: 72in.