Bageshri has learned to cycle because of the Big Bike Revival
By claire
Tuesday, 8 August 2017

Bageshri Hasabnis hadn’t been on a bike since she was a child and has spent almost all her adult life without cycling. That all changed last autumn when the Edinburgh and Lothians Regional Equality Council (ELREC) took part in Cycling UK’s first Big Bike Revival in Scotland.

ELREC is a charity founded in 1971 that works to reduce inequality, promote human rights and has a wide-ranging membership. The charity has participated in the Big Bike Revival for the past two years, offering different cycling activities for novice and inexperienced cyclists to get back on their bikes.

“Last year ELREC went out cycling to Corstorphine Hill in Edinburgh as part of the Big Bike Revival,” Bageshri says. “Lots of my friends, my husband and my son went on the bike ride, but I couldn’t go because I couldn’t cycle. I felt so bad that I couldn’t go so I just walked there to see everyone on their bikes.”

“I decided by that by the next Big Bike Revival I’d be able to ride a bike. So I put my mind to it and learned to cycle.

The speed of Bageshi’s cycling journey surprised herself. She didn’t realise how quickly she’d build confidence and be able to go a bike. It only took a couple of lessons.

“One of my friends is a volunteer and she organised cycling classes for beginners,” explains Bageshri. “She lives close to me and after I decided I wanted to learn to ride a bike I contacted her and I went to the lessons. I did three or four lessons with her to give me a bit of confidence. When an ELREC bike ride came up from Bangholm outdoor centre in Trinity to Cramond beach, I joined them and it was a wonderful experience.”

The cycle training helped to blow away the cobwebs and improve cycling skills for Bageshri, as she’d learned to ride as a child but had no experience of on-road cycling. “I didn’t ride on roads, just on school grounds or with someone helping and supporting me while I was riding,” she says. “The ELREC Cramond beach ride was the first time I cycled on a road. It was about six or seven miles and was a wonderful experience. I did it in February, it was winter and it was freezing cold when we got to the beach.”

Didn’t the winter weather put her off as a novice cyclist? “I was so determined I wanted to do it, so it was nice anyway,” she replies. “When I got to the beach and realised I had completed the distance, I was so happy at the power of myself!” 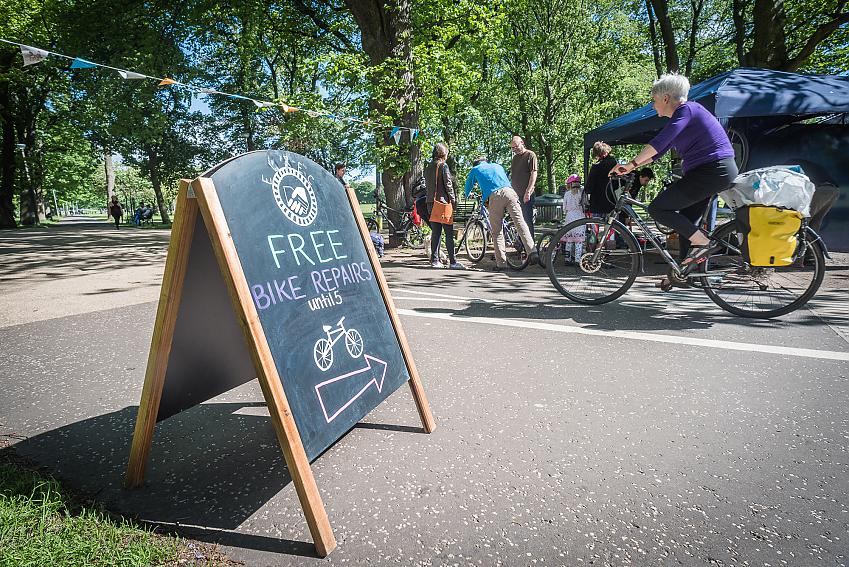 Spurred on by the Big Bike Revival in 2016, when the project returned to Scotland for 2017, Bageshri was ready for ELREC’s Big Bike Revival led rides and could attend them with her friends and family.  “I really enjoyed the rides,” Bageshri says. “They have given me more confidence to cycle and the next step for me is to take my cycling a bit further.”

Understandably, roads are still a challenge, as traffic can be a daunting prospect for a new rider. “I’d like to be able to cycle to work but I still feel scared when I ride on the roads. I have no problem cycling on cycle paths, but my work is in the city centre and I am not confident about cycling in traffic. I’d like to be able to ride my bike in the city but it is too scary.”

So what’s next for Bageshri to overcome this challenge? More cycle training to boost her confidence is an option she is exploring. “I would like to do further levels of Bikeability training to build my confidence. I want to keep up my cycling and that will help with my confidence, too. I am looking forward to more cycling with my family.”

One thing’s for sure with this new rider: if Bageshri puts her mind to it, it’s going to happen. She echoes this sentiment with her own advice for people who are thinking about getting back on their bike. “If you decide to do it, it’s not difficult,” she says. “It’s just a skill, you need to learn it like anything else. When you start first time you’ll think, ‘Oh, I can’t do it.’ But once you decide, you can do it. Nothing is impossible!”