Petitioning for a green route to Heysham

Petitioning for a green route to Heysham

Lancashire cycle campaign group Dynamo has been successfully drumming up public support for a proposed green cycle route to connect Lancaster to Heysham.

A proposal for a new green cycle route to Heysham, as an extension to the Lancaster cycle network, has been made by local cycle campaign group Dynamo.

The group organised a public petition to show the level of support for the scheme and launched an e-petition on Lancashire County Council's website. The group's e-petition and paper petitions collected an impressive 2,412 signatures over the three-month period leading up to 28 June 2014.

Dynamo identified the need to reclassify and upgrade footpaths across Heysham Moss to create an attractive, direct and safe multi-user path to connect Heysham to Lancaster.

Whereas only the most confident of cyclists can currently make the journey by the existing unsafe roads, this new route through green space would be suitable for anyone and would reduce the distance by bike by a full mile to 5 miles.

“The response of local people to our public petition has been energising,” says Dynamo's Paul Stubbins. “Families are excited at the prospect of a safe cycle route towards Lancaster that will allow them to access a local sports centre with their children, as well as Lancaster itself. The support kept us going but also reminded us that the stakes are high and we need to make the campaign a success.” 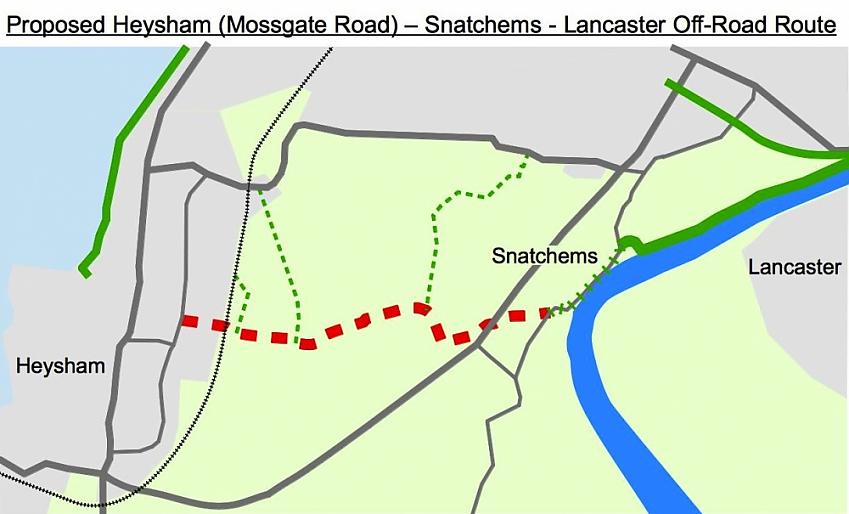 The team placed campaign leaflets in local libraries, businesses and a pub on the proposed route. The use of a bit.ly link for the e-petition made promotion easier and gave useful information about when people were going online to sign up. The group has also set up a Facebook page.

“Collecting paper petitions was a great way of involving the public and getting their feedback and comment, but it did take up a lot of time,” says Paul. “We were delighted that one headteacher sent leaflets home to parents with a letter of recommendation from himself.”

The group has also written twice to local councillors asking them to pledge their support to Space for Cycling and to get behind the route project. The two local MPs have also been briefed on the plans.

A public meeting hosted by Dynamo was also significant in bringing new pledges of support, including from the local Ramblers and Bridleways Association.

Now that the public campaign is complete, the group will be writing to the Council asking for a plan to take the proposal forward. "It is fabulous to have found a unity of support from the public,” says Paul. “But we are well aware that the project could easily stall before it ever gets into the council’s plans of works. With the exception of the local Green County Councillor Gina Dowding, we are still lacking active support from our elected representatives, which is going be the focus for the next stage of our campaign.”