Who is winning the Vote Bike race?

The political race - what will it mean for cycling?
By Sam Jones
Thursday, 7 May 2015

Who is winning the Vote Bike race?

As the UK heads to the Polling Station, CTC’s Sam Jones dwells on the similarity of the election and a cycling race

I have to credit cycling journalist Laura Laker for this idea, when she asked me who I thought would win should the leaders of the five national political parties had a cycle race down Whitehall to Parliament Square.

It’s a tough call without knowing the current form of all five – or indeed whether they all can ride – and I was left stumped by the question. In an all-out sprint down Whitehall, I suspect, political affiliations aside, it would be between the current PM and DPM (if only because I know both can cycle). However, as we have seen with the lengthy build up to this election, it’s not a sprint but rather a long haul race.

The concept of a sprint between leaders however made me start to think about the race between parties themselves.

In the polls and wider media, it would appear both the Green Party and UKIP took off first. They formed a breakaway which managed to grab and hold the public’s interest almost all the way up to the leaders’ debate. As breakaways will do in a real race, the popular rise (for better or worse) of these two parties has made this race/election all the more interesting. Commentators are now rightly questioning what this will mean for the future of British Politics and “first past the post”, particularly in light of the fact that another coalition appears on the cards.

Whatever the outcome of the election through CTC’s Vote Bike campaign we know nearly a third of tomorrow’s politicians believe strongly in the importance of cycling and its promotion."

However, as the election races to its conclusion, we’ve seen the breakaway swallowed up by the main peloton of the Conservatives, Labour and Lib Dems. Labour and the Conservatives are now pulling away at Le Flame Rouge, but with the battle for third place very much up for grabs, and regional team the Scottish National Party are making a strong showing. How the podium will look in the end is anyone’s guess. 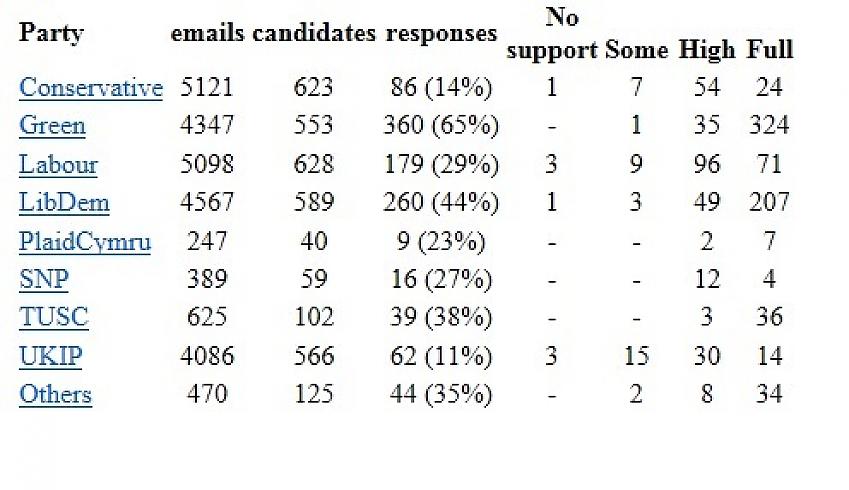 Whatever the outcome of the election, through CTC’s Vote Bike campaign we know nearly a third of tomorrow’s politicians believe strongly in the importance of cycling and its promotion.

With the help of members, cycling supporters and local campaign groups, 32 per cent (1055) of the 3285 candidates we contacted engaged with Vote Bike. Of these 1010 (31%) candidates have shown strong support, of whom 721 (22%) have been fully supportive of our five asks on ambition, funding, design standards, safety and promotion.

Three party leaders have signed up (Lib Dem, Green and Conservative) and together with the high level of cross party support, CTC is confident that we will have the tools to maintain the momentum we built in the first quarter of 2015 prior to the distraction of a national election.

Our job will by no means be easy. We will be one voice among the hundreds clamouring for the new MPs’ attention – however the benefit of Vote Bike means we are already known and in many cases already have commitment. Come tomorrow our ongoing task will be to make sure our Commons’ “supporters” make good on their promises.

As ever, our success will be dependent on the support we receive from the wider public. For cycling to matter to the political elite in Westminster or even your local borough, it needs the many loud voices we have seen in our Vote Bike, Funding for Cycling and Space for Cycling campaigns to continue to highlight cycling’s benefits and needs. The campaign for better cycling is never over but with your help progress has been made and will continue to be made over the next 5 years.